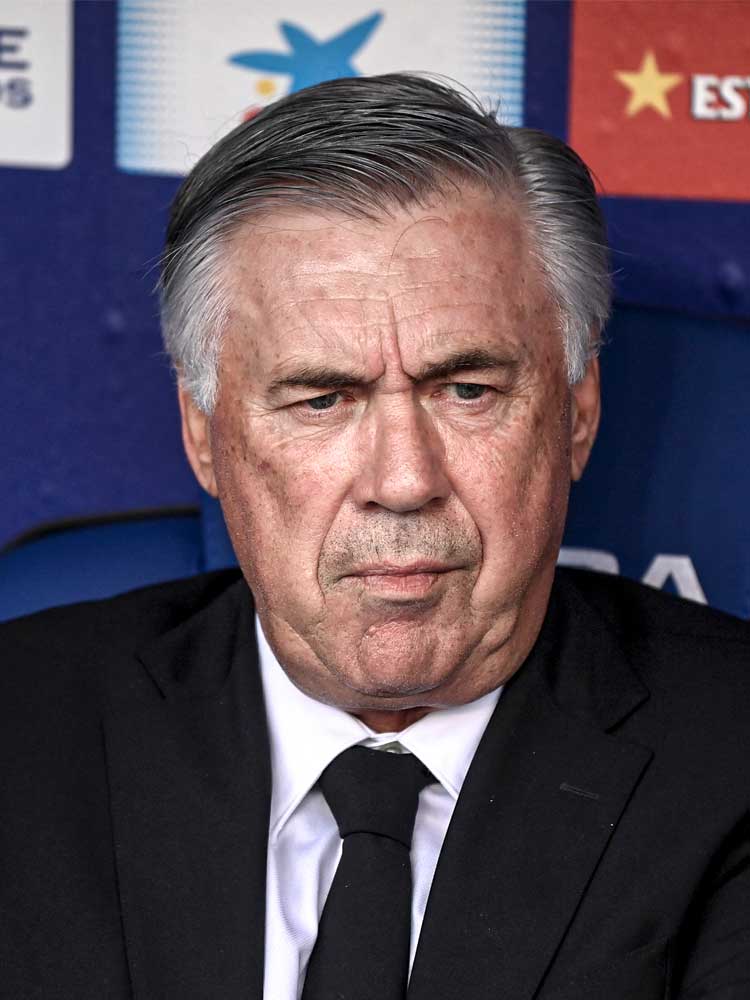 Carlo Ancelotti's first season back at Real Madrid could scarcely have been more successful. After wrapping up the domestic league title with weeks of the season to spare, victory over Liverpool in the Champions League final in May 2022 secured the biggest prize in club football. It was the fourth time the Italian has won the competition in his managerial career, which is more than any other manager in the history of the European Cup.

Considering many had wondered if he would ever return to an elite club after mixed success at Everton in the Premier League, the two trophies he won in his first 12 months back at the Bernabéu came as something of a surprise. If it wasn't already secure, his status as one of the game's true legends is now absolutely unquestionable.

Playing style
Wherever he has gone, Ancelotti has shown an impressive ability to adapt. At Milan he used a 4-4-2 with a diamond midfield; at PSG he largely used a 4-3-3; in his first spell at Real he used a 4-2-3-1 that converted into a 4-4-2. Then, at Napoli, having inherited a high-quality team that played in a fluid, possession-based 4-3-3 under Maurizio Sarri, Ancelotti reorganised them into an attacking 4-4-2. He then used a similar system at Everton, from which they built with a back three (below).

Since his return to Real, Ancelotti has favoured an in-possession 4-3-3, with the aim of getting the most of the wide forwards' dribbling ability. Vinícius Junior has become particularly influential when cutting in off the left to both create goalscoring opportunities and shoot at goal. On the right, it has tended to be Marco Asensio cutting infield on to his stronger left foot, although the right-footed Rodrygo has also played there, and he tends to hold the width more. Federico Valverde provides a different option on the right side of attack, drifting into central midfield when right-sided number 8 Luka Modric has dropped out to support the team's deep build-up.

Both full-backs are free to push forwards at the same time, though they do so in different ways. On the right, Dani Carvajal or Lucas Vázquez are both capable of going around the outside or coming inside to overload the central spaces. They tend to attack earlier than left-back Ferland Mendy, who provides delayed overlapping runs around the outside of Vinícius once he has moved infield (below).

The evergreen Karim Benzema rotates out of position constantly, and often moves to the left flank to swap positions with Vinícius and Mendy, and also to create overloads on that side. Benzema is happy coming deep to collect the ball in central areas, and is brilliant at doing so, providing an effective out-ball when Madrid need to go direct – something Ancelotti is happy for them to do. However, Benzema has been most effective when pulling out to the left flank to team up with Vinícius. The combinations between Benzema and Vinícius were Ancelotti's greatest attacking weapon in 2021/22, and a big part of the reason they won both La Liga and the Champions League.

Toni Kroos, the left-sided number 8, consistently drops in the left inside channel (below) – as he has done throughout his Real career – providing support underneath Benzema and Vinícius, but also covering for Mendy’s advances. One of Real's main ploys under Ancelotti has been to overload the left side in this way, draw the opposition over, and then have Kroos switch play quickly out to the right. There, the right-back and right-sided attacker worked to overload the opposition's left-back, with Modric supporting in case play needs to be recycled again, though he takes up more advanced positions than Kroos on the left.

Real often build with a double pivot of Casemiro and one of Modric and Kroos. However, when the team are struggling to get out against a high press, both Modric and Kroos – two of the best ball-playing midfielders in Europe – will drop together, with Casemiro pushing forward. This flipping of Ancelotti's midfield is most effective when Valverde is used on Real’s right, as he is comfortable playing in central midfield, and moves inside to provide a higher central option between the lines.

Central midfield fluidity has been key to Real’s success in Ancelotti's second spell at the club. The Italian has managed to get the best out of Kroos and Modric to control possession and take the sting out of games, before finding Benzema and Vinícius who have proved lethal in the final third.

Although there are very few domestic games in which Real have less possession of the ball than their opponent, they don't press high very often at all compared with the rest of the teams in La Liga. Madrid often used a mid-block in 2021/22, with low blocks also deployed in spells in some matches in European competition against strong teams. They only really make aggressive attempts to win the ball once the opposition advance into the middle third of the pitch in central areas. Otherwise, they are largely happy to let the opposition have the ball where they can't cause much damage or threaten the Real goal.

When the ball is in the opposition's half, they remain in their 4-3-3 shape (above), before dropping back into 4-1-4-1 block when closer to their own goal, with Casemiro adopting a position between the defensive and midfield lines. On the left, Vinícius cheats slightly, remaining slightly ahead of the rest of the midfield line to launch counter-attacks from his side, and he will not track all the way back to support his full-back partner Mendy with every attack. Casemiro will then be needed to cover across or drop into the backline when Mendy moves out to press his opponent or when he is overloaded. Casemiro is an intelligent player, and will drop between the two centre-backs or alongside them when another player is required in defence.

When Madrid are set in their block or when they have dropped into a low block, Vinícius may drop into the midfield unit and they often set up in a 4-4-2 block (below). When Real transition to defence, it is easiest for them to move to this shape quickly, with Kroos normally deeper than Modric at the point of a turnover.

On some occasions in the Champions League, Ancelotti’s right-sided midfielder has worked all the way back to form a back five, defending on the outside of the right-back (below). The central midfield three then flatten, with Vinícius and Benzema left up front as a threat on the counter-attacking from a 5-3-2 block.

Although Ancelotti has enjoyed success just about wherever he has gone, few could have predicted the heights his Real Madrid side hit in his first season back at the Bernabéu. He is pretty unique in his management style at the elite level of the game, but clearly his methods work brilliantly. There is now little left for him to achieve.