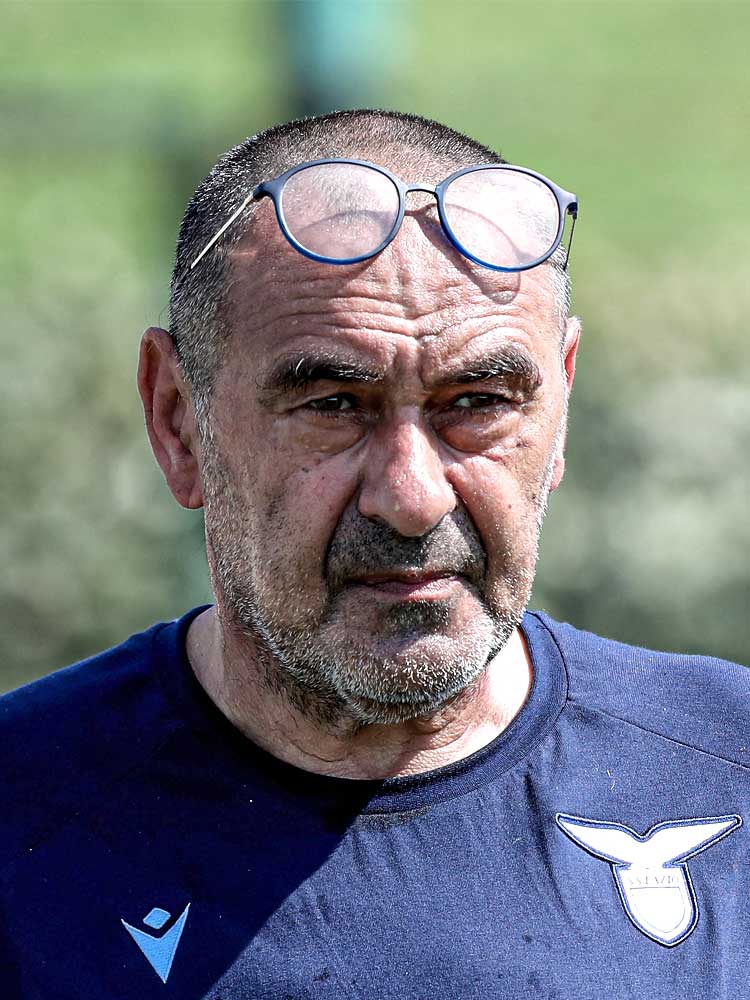 Profile
Maurizio Sarri has led Juventus to the Serie A title and Chelsea to the Europa League, but it is his time with Napoli, where Sarriball became so widely admired, by which he continues to be defined. Napoli may not have been rewarded with silverware for their impressive performances, but they were so highly thought of that none other than Pep Guardiola described them as: "Perhaps the best side I've faced in my career. I am in love with Napoli."

His appointment by Lazio as the successor to Simone Inzaghi in June 2021 may have presented him with the most suitable circumstances, after solitary seasons at Chelsea and Juve, to build another team in his image. Aged 62 when he was unveiled in Rome, that will unquestionably be his ambition. "He aimed for perfection," said his former defender Gianbattista Scugugia. "I've never met such a hard worker in my career. Fifteen years ago Sarri took care of every smallest detail, every day. Now he's changed a bit but is still a hard worker as well as a winner. He doesn't like to finish second."

Tactical analysis
In Sarri's previous position at Juve he, for the first time, mostly favoured a 4-4-2 or four-diamond-two; his traditional 4-3-3 was instead used sparingly, ultimately so that he could accommodate Cristiano Ronaldo, Gonzalo Higuaín, and Paulo Dybala in the same starting XI. The Italian also converted Juan Cuadrado into a right-back; Alex Sandro was their senior left-back, and Danilo deputised for both; between them they provided Juve's attacking width.

Miralem Pjanic featured at the base of midfield when they were organised into a four-diamond-two, and therefore was also the midfielder who withdrew deepest when they used an orthodox 4-4-2. Blaise Matuidi and Rodrigo Bentancur were regularly selected alongside him in midfield and advanced forwards and infield to create increased space for their full-backs to move into, and Dybala featured at the tip of their diamond, behind Ronaldo and Higuaín (below).

Fewer movements were required from Sarri's diamond midfield for them to assume their favoured attacking shape; their 4-4-2, by comparison, required possession to be built before they attacked. When that was the case, Pjanic withdrew into deeper territory, their wide midfielders moved infield, and the second central midfielder advanced. On the occasions Dybala was selected in their front two he, too, withdrew into midfield – therefore often leaving Ronaldo as their lone striker – to offer rotations and deeper off-the-ball runs.

Sarri's time at Chelsea involved a similar approach and 4-3-3 to that seen at Napoli. Eden Hazard attacked infield as their left-sided forward (below), and Marcos Alonso or Emerson Palmieri offered overlaps from left-back. Towards the right, Pedro, Willian or Callum Hudson-Odoi provided their attacking width, and while César Azpilicueta supported them, he was more reserved than Alonso and Emerson in an attempt to provide a stronger balance in defence, and to support links into midfield around Jorginho, their defensive midfielder.

The influential Jorginho was their primary ball-player; one central midfielder regularly withdrew into deeper territory to support from alongside him, and the third central midfielder, when necessary, moved forwards behind the striker who remained in advanced territory. N'Golo Kanté, Mateo Kovacic, Ruben Loftus-Cheek and Ross Barkley all featured ahead of Jorginho in central midfield, from where they favoured advancing through the right inside channel to increase Hazard's attacking freedom, and during a season in which the Belgian produced some of his finest form by operating from between the lines and between full-back and central defender.

Sarri's increased time at Napoli – he spent three seasons there – meant that his 4-3-3 evolved further than it did at Chelsea. During 2015/16 as their senior striker, Higuaín scored 36 goals in 35 appearances in Serie A, and often because of their impressive ability to build possession in wide territory. He remained advanced for as long as possible, and only withdrew into a deeper position on the rare occasions it was necessary or to invite one of their wide forwards to advance in behind on the counter.

They were particularly fluid towards the left (above), where they regularly progressed possession via quick combinations and rotations and runs from a third player. Faouzi Ghoulam advanced from left-back, and the right-footed Dries Mertens or Lorenzo Insigne, as their left-sided forward, drifted infield, where they were supported by the movements, incisive passing, and off-the-ball runs of Marek Hamsik. Towards the right they were considerably more direct; José Callejón, as their right-sided forward, attacked around the outside of opponents to provide crosses or, if play was unfolding towards the left, moved infield to operate alongside Higuaín as a second striker. Elseid Hysaj largely resisted attacking from right-back, and instead featured in what temporarily became their back three.

Jorginho was Napoli's defensive midfielder, and was supported by Allan, who also moved deeper to contribute to recovering the ball. They regularly complemented Hamsik's forwards runs by forming a double pivot. Jorginho also orchestrated a significant amount of their deeper build-up and linked play to both sides of the pitch, and his speed of thought and passing range contributed to the extent to which they dictated play before their rotations and movements unfolded. When Higuaín later left for Juve, Mertens, partly owing to injuries suffered by Arkadiusz Milik, featured as their central attacker, and Insigne consistently started towards the left. His players' familiarity with his methods meant Sarri's team accumulating a club record 91 points in Serie A – the most of any runner up in the competition's history.

Defending and pressing
Juve's use of a front two meant that they also defended differently to Chelsea and Napoli. Demonstrating an increased use of a mid-block, they were difficult to play through; their front two worked to block access into the opposition's defensive midfielders and therefore to force the ball wide, and they then provided secondary pressure to attempt to keep it there and to prevent passes back infield or switches of play. Their second line of four, however, offered too little cover from between the lines (above), so if that line was penetrated through, Juve's central defenders instead aggressively stepped forwards – potentially into midfield – to defend against a striker withdrawing into a deeper position or an opponent driving forwards with the ball.

When that left space in their defensive line, their wide midfielders – Matuidi, Bentancur and Adrien Rabiot were their most defensive-minded – withdrew back into defence, regardless of whether doing so from a flat four or diamond. Through them adopting more central positions when they were without the ball, forward runs became easier to track, contributing to a more defensive team.

Chelsea's ability to dominate possession meant that they regularly made regains in their attacking half and by applying an aggressive counter-press. Their wide forwards moved to take their opposing full-backs, and their attacking central midfielders required the versatility to cover against switches of play or if those wide forwards were beaten, and to remain responsible for spaces in the inside channels.

Their strikers, Higuaín, Álvaro Morata or Olivier Giroud, were relatively immobile, and therefore applied limited pressure to the opposition's central defenders and defensive midfielders, so Chelsea's central midfielders were also required to advance and support alongside whichever striker had started. Barkley and Loftus-Cheek, however, were less convincing at covering wide than were Kovacic and Kanté.

Sarri’s Napoli applied a particularly aggressive press that often resembled the shape of Chelsea's. The younger Higuaín, and later Mertens, worked across the pitch to press the in-possession central defender, and attempted the direct their pressure wide to prevent switches of play and to force possession to one side of the pitch (above). If that meant opponents switched play via aerial balls, the relevant wide forward react to aggressively press infield and engage as their most advanced defender.

Napoli's central midfielders most commonly prioritised their closest opponent, which meant Allan often advancing ahead of Jorginho to alongside Hamsik. With the opposition's defenders under pressure from Napoli's striker, the closest attacking central midfielder and wide forward moved from their opponents to adopt half-and-half positions so that they could block passes through midfield while remaining close enough to those opponents to press them, if required. The timing and ability of their wide forwards and attacking midfielders to reposition themselves particularly impressed.

Napoli, like Chelsea, regularly recorded a strong grasp of possession, and therefore made numerous regains via their counter-press and the ability of those offering cover to make regains after attacking players had conceded the ball in the final third; Allan's tenacity, and Jorginho's ability to read their opponents, were crucial to their success. That their left-back so readily attacked and contributed to their counter-press meant that Hysaj's discipline at right-back was also important. Even with space being vacated at left-back, Kalidou Koulibaly's ability to cover, from central defence, direct passes played there and against fast attackers – potentially via direct duels – ensured that with Jorginho and Allan also moving to the left to provide support, Napoli remained defensively sound.