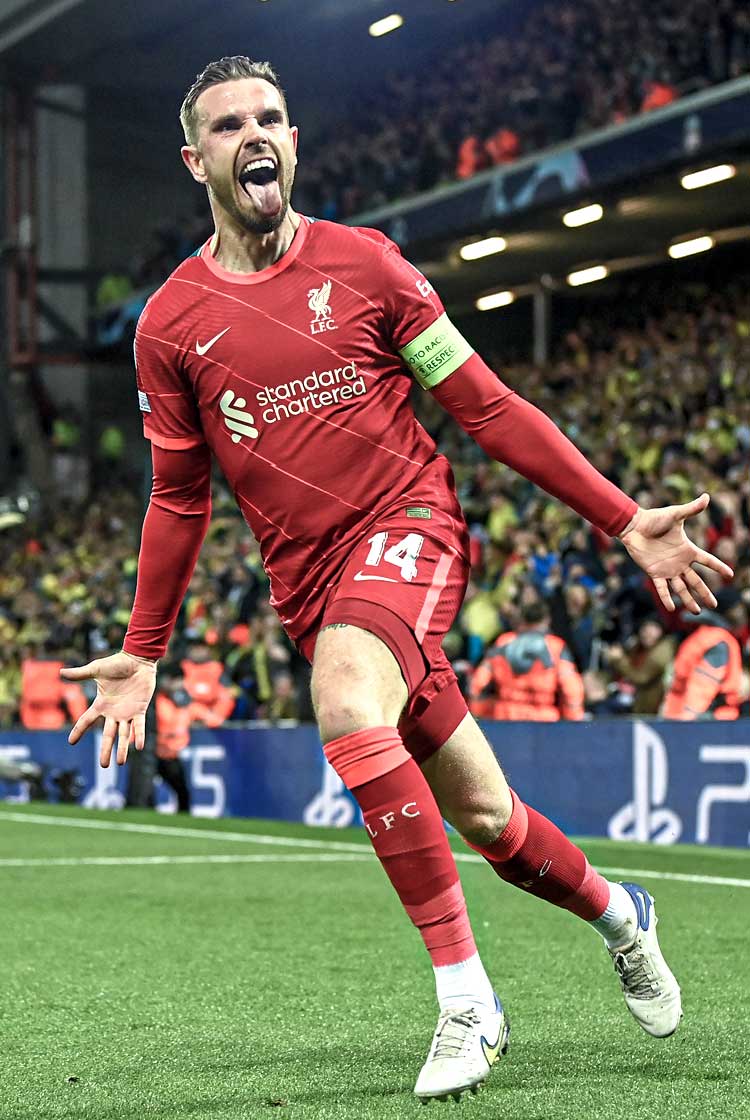 Liverpool enjoyed near total domination in beating Villarreal in this Champions League semi final first leg, but did not quite finish the job after Unai Emery's men restricted their hosts to two goals. Shortly after half-time, Jordan Henderson forced the first goal when his cross was deflected into the net by Pervis Estupiñán, before Sadio Mané doubled Liverpool's lead two minutes later. Liverpool were superior in just about every department, and will hope they are not made to regret not adding to their lead, though Villarreal will have to improve markedly if they are to find a way back into the tie.

"It was a brilliant game," said Liverpool manager Jürgen Klopp. "The first half I liked a lot – we didn’t score, that was the only problem that we had. But we kept them quiet, which was important because of the counter-attacking threat."

“It could have been a worse hill to climb," said Emery. "The only thing now is 2-0 still gives us a chance to have a different performance at home. We are still alive.”

Liverpool attacked using a 4-4-3 structure against Villarreal’s 4-4-2 low block. Inside-channel runs from the hosts’ number eights, which were tracked by Villarreal’s central midfielders, helped access the narrow front three. The away side’s wide midfielders, meanwhile, focused on Liverpool’s full-backs. Mo Salah and Luis Díaz positioned themselves inside the pitch to be close to Sadio Mané, which forced the visitors’ back line to remain extremely compact. This created more space for number eights Henderson and Thiago to run forward into (below). As the first half progressed, Thiago positioned himself deeper, with Andy Robertson moving forward on Liverpool’s left. Jordan Henderson continued with his forward runs on the right, with Trent Alexander-Arnold mostly tucked inside.

Villarreal’s 4-4-2 low block remained extremely compact throughout the first half, and frustrated the home side. Playing through the middle was almost impossible, so Liverpool tried to reach the final third by playing over the visitors’ block into the wide areas (below). Salah, Henderson and Alexander-Arnold each moved out to the right to make runs in behind; switches of play from Thiago or Robertson targeted them, and Liverpool then threatened with first-time crosses into the middle. It was from the right side that Liverpool eventually made the breakthrough – albeit fortuitously – when Henderson’s deflected cross looped over Gerónimo Rulli early in the second half.

A key component of Liverpool’s attacking play in the second half was how they connected the two inside channels. First, they ensured they had runners moving beyond the Villarreal defence, prioritising the spaces between Villarreal’s centre-backs and full-backs. This movement was made by Luis Díaz on the left – with Robertson overlapping – and then Mané or Salah on the right. Henderson continued to push forward, and Alexander-Arnold took up a narrow position in the right inside channel. From here, he connected impressive penetrative passes into the players making runs on the left (below). Thiago and Fabinho were key in providing support underneath the ball, as they dealt with Villarreal’s two centre-forwards, preventing counter-attacks and locking the visitors well inside their own half for long periods.

Front three between the lines

With Henderson and Robertson providing Liverpool’s width, the narrow front three alternated in dropping between the lines. Liverpool always had options in midfield to work the ball from side to side, and patiently kept the ball before looking for a gap to break through. The highest of Liverpool’s attackers threatened in behind, which helped push Villarreal’s centre-backs deeper. This created more room between the lines, and the home side’s second goal came when Salah managed to turn and slip Mané through for a potentially crucial second goal (below).

Full-backs as the free player

Villarreal maintained their 4-4-2 shape when building against Liverpool’s aggressive press from a 4-3-3. For the most part, their full-backs were their free players, especially as Liverpool’s front three remained narrow. Juan Foyth and Pervis Estupiñán attempted clipped passes into the two centre-forwards or played into the wide midfielders (below), but Liverpool dealt with this play well. Their centre-backs dominated direct balls through the centre of the pitch – even when Villarreal’s wide midfielders ran forward in support – and any wide play was pressed aggressively by Liverpool’s central midfielders, who shifted across.

Liverpool’s wide forwards pressed Villarreal’s centre-backs, while Mané covered the deepest pivot and goalkeeper. This left the full-backs free, but as Salah and Díaz stopped direct passes to them, Villarreal could only play over or around to access their full-backs. This gave enough time for one of the hosts’ central midfielders to get across to press out wide, and Liverpool then locked the ball by the touchline. The only occasions when Villarreal progressed was when Mané failed to cover Villarreal’s deepest central midfielder (below), and they then bounced the ball to their closest full-back or played around the corner into the full-back on the far side. However, Liverpool’s full-backs then jumped out to press and swiftly won the ball back.

Due to Villarreal spending long periods in their compact shape without the ball and Liverpool’s aggressive counter-pressing, the visitors’ attacking play was extremely limited and ineffective. Their wide midfielders narrowed to create a central four, which did help them beat the press on the odd occasion, but Liverpool’s back line were more than comfortable in dealing with direct, central passes and any attempted runs in behind. The hosts' high line also allowed their back four to defend on the front foot and cover the spaces between the lines. With Villarreal’s midfield unit incredibly narrow when attacking, Liverpool could then counter-attack out wide. Quick switches of play led to plenty of chances for the hosts on the night.