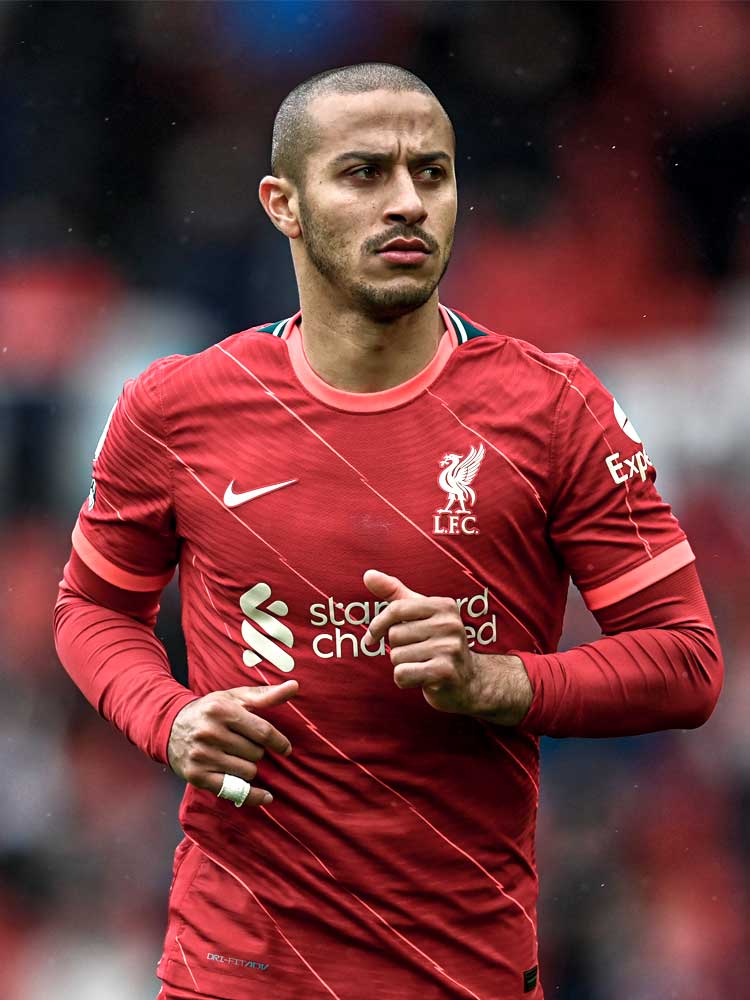 Profile
“Thiago or nothing,” demanded Pep Guardiola after he arrived at Bayern Munich in 2013 and reshaped his squad. In his plans for his new team, Guardiola wanted a midfield playmaker, and he was only willing to settle for Thiago Alcântara, who he had worked with at Barcelona up until a year before.

Together at Bayern, Pep and Thiago won three consecutive Bundesliga titles as the Spanish midfielder established himself among the very best at dictating the tempo of a game from deep. Then, in 2020, Jürgen Klopp brought Thiago to Anfield in his battle with Guardiola’s Manchester City for dominance of the Premier League. “He is a good, hard-working guy,” said Klopp. “But he comes rather from the technical side and was used to different patterns Bayern Munich, so (his first season at Liverpool) is not a year where a new signing shines, especially in midfield. We are 100 per cent convinced we will get the best out of him because he is a world-class player.”

Tactical analysis
Thiago is a deep-lying playmaker who is always looking to get on the ball and control a match through his passing. He is similar – in possession in particular – to Sergio Busquets, Rodri and Jorginho, in that they are all central midfielders who link play between their team’s units and progress possession through the thirds. He typically makes movements towards the ball as play is built in defence, and he will also occasionally withdraw into defence to create an overload in the first phase of his team's build-up, encouraging central defenders to adopt wider positions, and full-backs to advance.

When receiving a pass, he often positions his chest in the direction that allows him to see as much of the pitch as possible, instead of towards the player he is receiving from; he scans the pitch behind him before that pass is made and as the ball travels towards him, so that he is always aware of what is happening around him, before quickly making a calculated decision regarding his next action. Doing so contributes to his impressive ability to evade pressure and to take his first touch away from an approaching opponent.

Something rather unorthodox about how he receives the ball is that he uses the sole of his foot to control it – something that is not taught to young players. Stopping the ball that way will slow play down too much through not being in a position to play a pass immediately, given another touch is needed to move the ball out of one's feet before a pass can then be played. Generally speaking, doing that is avoided among top-level players because the pace of the game is so fast that any extra touch could allow an opponent a crucial, extra split-second. Thiago, however, goes against all orthodoxy in that regard; he rolls his foot over the ball to move it away from danger with his first touch (below), or uses the extra touch to his advantage by stopping the ball dead with the sole of his foot – convincing his opponent to slow down – before quickly shifting it to one side and away from that opponent.

Technically, he is one of the best players in the world, and he is able to manipulate the ball in remarkable ways. He is happy to receive the ball to feet in any situation and uses his incredible vision, awareness and passing ability to get out of trouble. One of his greatest strengths is how he uses his skillset to look to play forwards at every opportunity. It is common for central midfielders to receive passes facing their defence and so return it in the direction it came from, but Thiago will always look to turn on the ball in midfield and play forwards. His teammates know they can trust him to control the ball when under pressure, and possibly even spot a route forwards regardless of that pressure, so he demands the ball comes his way at the earliest possible moment. Once with the ball, he looks to break lines with a pass towards either a half-space or into a forward’s feet, for them to set the ball back to a forward-facing teammate (below).

He is brilliant at shifting his body weight to drift past an opponent or simply to create a yard of space in which to play a pass. He uses the momentum of any player who approaches him to his advantage, quickly jinking from one side to another and pushing the ball into space. He varies his passing impressively to adapt to the situation, able to play low, driven passes to break lines, clipped balls over a defence, and sprayed balls out wide to switch play. His low assist numbers owe to the deep positions he adopts more than any deficiency to his passing, or a lack of creativity.

His favoured position just in front of his team’s defence requires him to work hard out of possession, and when he is required to defend, he is dynamic when closing opponents down and has a good eye for danger. He recognises when to press his direct opponent, when to move to another opponent, and when to hold his position and provide cover. He also doesn’t shy away from physical battles, and makes a lot of tackles and fouls to break up play before quickly distributing to a teammate to launch a counter.

Role at Liverpool
In the 4-3-3 Klopp plays on a weekly basis at Liverpool, Thiago plays either as the deepest central midfielder or as one of their two number eights. He is probably best-suited to playing as the central player, sitting in front of their back four and dictating the tempo of the game, but Fabinho is so important – and he can’t play as a box-to-box midfielder – that when he is available he instead plays that role. Thiago is far more athletic than Fabinho, so he can both support attacks and quickly recover back into their out-of-possession shape.

Thiago therefore often plays as the right-sided of their three central midfielders, dropping back into defence – on the right side of their two centre-backs – during build-up phases, allowing Trent Alexander-Arnold to push forwards from right-back. When the ball is further up the pitch, he moves across into the space Alexander-Arnold has vacated to cover for him in the event of a counter (below).

From his inside-right position, Thiago looks to feed play towards Mo Salah on the right side of attack where possible, and he combines well with the Egyptian and Alexander-Arnold if he chooses to advance. When he does move forwards, Fabinho remains ready to move across and cover.

Thiago also provides a regular route to their centre-forward’s feet, before looking to make a supporting run underneath that player – usually Roberto Firmino or Diogo Jota – and looking to receive a return pass before then progressing play again. He, similarly, where ossible will often look to switch play out to Andy Robertson on the left with a driven, low trajectory pass.

He is well-suited to Klopp’s counter-pressing game, and at defensive transitions Thiago is alert to the opposition’s attempts to break and will work hard to quickly close the ball down. He snaps into tackles – sometimes too enthusiastically, giving away free-kicks – to try and regain the ball high up the pitch, and will recognise when he is needed in a supporting role for a teammate who is engaging the opponent on the ball.

Thiago’s first season in English football was not the most successful; a player many predicted would take the 2019/20 champions up a level instead had to contend with injuries, both to himself and to key teammates, to make his introduction to the Premier League highly problematic. Nonetheless, there were plenty of positives to take from that difficult first campaign, and plenty more reasons to be optimistic he will enjoy a successful time at Anfield.