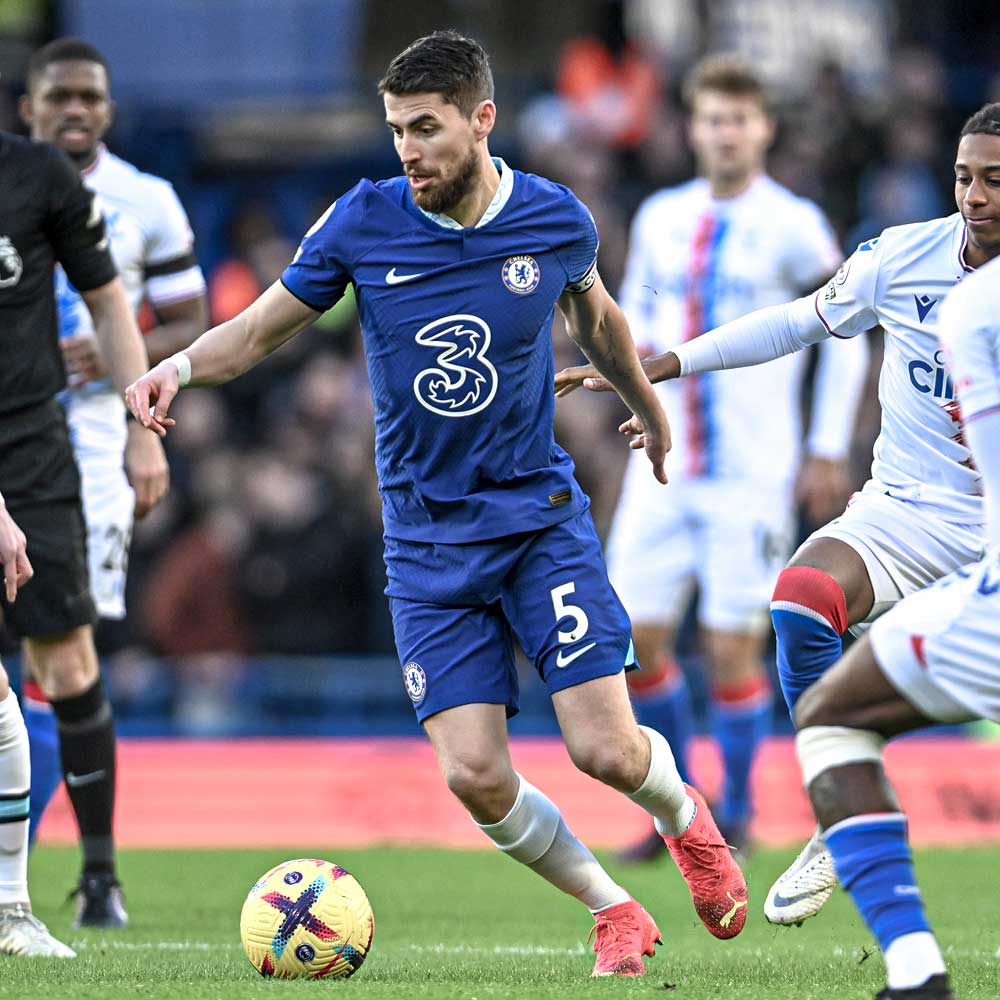 Jorginho was the signing Maurizio Sarri demanded above all others when he was appointed Chelsea manager in July 2018, the Italian stressing the importance of beating Manchester City and Pep Guardiola – and his assistant at the time, Mikel Arteta – to the midfielder’s signature. Jorginho has long had admirers in very high places and, three years on, Arteta, who apparently pushed for City to sign the Italy international, has finally got his man. Now the Arsenal manager, Arteta has taken Jorginho to the Emirates in what is reported to be a £12m deal.

His signing signals a break – albeit an isolated one – from Arteta’s preferred policy of signing young players he can mould into the player he wants. Jorginho does, however, bring a wealth of experience to an otherwise youthful team, and another fantastic option in central midfield. Here, we take a detailed look at his game, and consider what exactly he brings to Arsenal, who are currently top of the table and hoping Jorginho can help them win the Premier League title this season.

Tactical analysis
Jorginho is a ball-playing central midfielder who is best as the main point through which his team’s possession go. He control the tempo of play from deep, links defence with midfield and midfield with attack, and moves laterally across the pitch to receive short passes wherever possible. He can play as the single pivot in a three or as part of a double pivot. When playing alongside a midfield partner, Jorginho is most comfortable in a position to the right side of central midfield. Here, he receives on the half-turn and looks to play diagonal forward passes, either to a runner on the right – the full-back or wide forward – or a switch of play out to the left.

He has the awareness, vision and passing ability to break lines, and he is also particularly skilled at lofting balls in behind from deep to put a teammate in. As so much play goes through him, the vast majority of his passes are played sideways, and much of his most important work is done simply moving the ball around the pitch in an attempt to draw an opponent out of their position in their team’s defensive structure. He builds up a picture of everything going on around him with his constant scanning, and is then extremely skilled at spotting any gaps and making the most of them. Wherever possible, he will take his first touch forwards, with the aim of progressing play, and he then plays a forward pass if an opportunity presents itself.

He almost exclusively receives the ball in front of the opposition’s midfield, and rarely sets up chances to score, so assists are extremely infrequent. Instead, he takes responsibility for receiving the ball, absorbing pressure, and then moving it on. He offers security in possession, and operates as a point through which his team can recycle possession before changing their point of attack.

When he clips passes in behind, he usually aims for the run of a wide player, who can then play the ball across the face of goal (above). These passes are eye-catching and extremely difficult to execute, but Jorginho gets the timing of these balls spot on, noticing the run of his teammate and recognising the perfect time to make his pass. His preference for this type of pass means he will fairly regularly play the pass before the assist rather than wracking up many assists himself. He is a very useful player in possession in spite of the fact that he doesn’t get many assists, but even so, a player with his passing ability should arguably directly set up more goals than he does.

One huge strength of his is penalty-taking ability. He uses the goalkeeper-dependent method, choosing to wait for his opponent to commit before calmly slotting the ball to the other side of the goal (below). He has an impressive success rate with his penalties, although his technique is a risky one – when he fails, it looks particularly bad and means he draws extra criticism.

When his team is out of possession, Jorginho takes up a position in front of the defence and screens passes into the opposition’s attacking midfielders or strikers. He shows a good understanding of where to best position himself and has good anticipation, so he makes plenty of interceptions as a result. He works hard to ensure gaps don’t appear for the opposition to play through, and communicates constantly with his midfield partner to maintain a short distance between them to stop passes though the centre of the pitch. He is proactive at defensive transitions, willing and always ready to quickly counter-press or cover behind an advanced teammate.

One weakness to his game is that he can he is sometimes caught out when an opponent isolates him in a one-on-one situation as he isn’t particularly fast or agile. Also, if he is playing as a single pivot, he can sometimes struggle to cover enough ground to adequately protect his defence in the wide areas on both sides.

Playing in a double pivot

Jorginho spent large parts of his Chelsea career as part of a midfield two in a 3-4-3 formation under Thomas Tuchel and a similar shape or a 4-2-3-1 under Graham Potter. You need to be a certain type of midfielder to be able to do the job he did in the 3-4-3, but in Mateo Kovacic and N’Golo Kanté, Jorginho always had a more mobile and athletic partner alongside him. His partner was also given more freedom to attack and play a more box-to-box role, while Jorginho sat deep and looked to dictate play while rarely progressing beyond the ball – much like a single pivot might play.

Jorginho, his central midfield partner and the two number 10s that play either side of a lone forward create a four-player box that will create a central midfield overload against a midfield two or three they encounter. The two number 10s push forwards along with the two wing-backs to form a five-point attack, and it is Jorginho’s job, alongside his central midfield partner, to get the ball into dangerous positions for the attackers. The attacking players will make opposite movements to lose their markers (above) and stretch the defence, and Jorginho played an important role in finding those runs.

With their wing-backs high, Chelsea’s route from defence to attack was often through Jorginho in central midfield. Given the presence of three centre-backs, there is no need for a midfielder to drop into defence, and he works hard to find space in central midfield to receive beyond the opposition’s first line. He is happy to receive the ball from a defender in a crowded space, and is skilled at receiving on his back foot as this allows him to progress play forwards with his second touch (below). This is an extremely useful trait that only the best central midfielders have.

When Chelsea attack, Jorginho would often take up an inside-right position to receive from an advanced player out wide and put a cross into the penalty area. He has the vision and technique to try to pick out a specific teammate, but this isn’t the strongest side of his game. He doesn’t put much power on his crosses, so he can leave his teammate with too much work to do to test the opposition's goalkeeper. More whip on his crosses would help his teammate out.

Jorginho arrived at Chelsea having played as the single pivot in Napoli’s 4-3-3 under Maurizio Sarri, and he did that job under the Italian at Stamford Bridge, as well as under Frank Lampard. Much of his job is the same as when he plays in a two, but when playing in front of a back four, he would drop in alongside the centre-backs to create a back three. This then allows the full-backs to push on in front of a temporary back three, and meant Jorginho got on the ball in deeper positions, where he struggles to affect the game high up the pitch quite as much.

As a single pivot, he will move across the pitch from side to side, looking to receive and play short passes and, playing in a midfield three, he usually has another central midfield teammate close by to pass to. He will start in deeper positions, so his long, clipped balls out wide are rarer, because he isn’t quite so good at them over longer distances. Instead, he will sit at the base of midfield, feed short passes to players ahead of him, and provide an out ball for his team when they want to recycle possession or switch play. Jorginho is then skilled at playing longer, square balls out to a full-back on the opposite flank to switch the play after his team have overloaded one side, but failed to progress down that wing.

Out of possession, meanwhile, when in a midfield three, any problems with Jorginho’s mobility are less pronounced. Although there will be bigger gaps behind him in the defence, the security of a midfield three helps him, particularly on the transition.

A Champions League and European Championship winner in 2021, Jorginho is a superb footballer with experience of both playing in the biggest games and winning major titles. He brings plenty of quality to Arsenal's ranks, and certainly strengthens the squad in several ways, if not necessarily the first-choice XI.