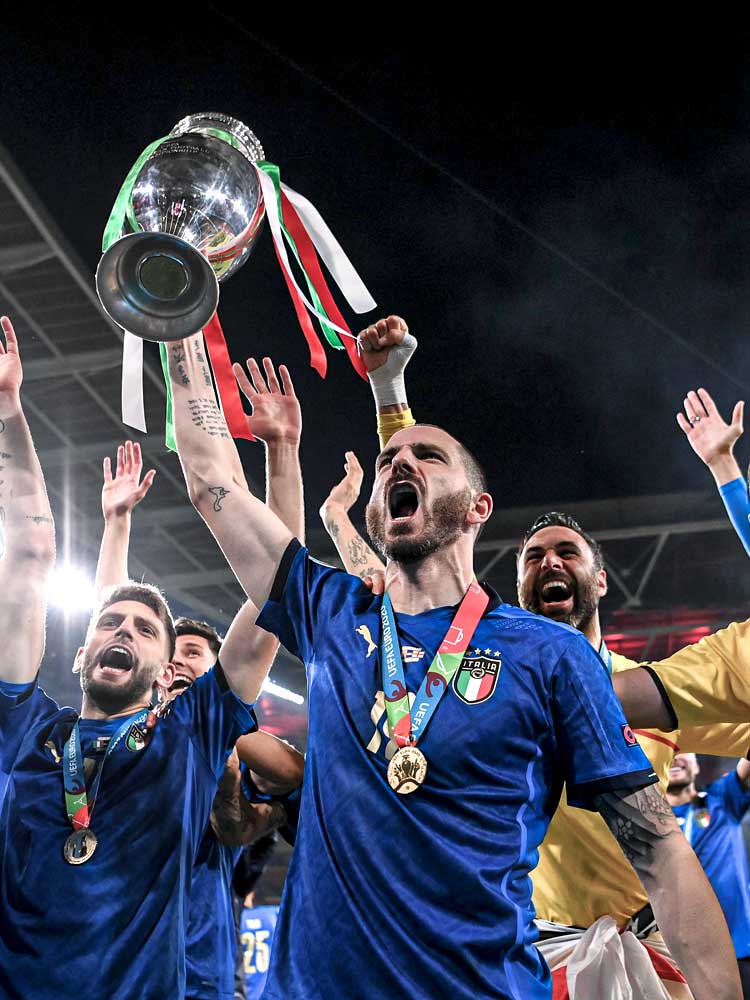 England's bid to be crowned European champions for the first time in their history ended in the familiar agony of a penalty shootout defeat, this time under the arch at Wembley Stadium. Luke Shaw's superb second-minute finish had put Gareth Southgate's team on course for a remarkable achievement, but as Italy dominated possession, Leonardo Bonucci scored their equalising goal in the second half after Jordan Pickford so impressively turned Marco Verratti's header on to the post. With the teams still level after extra time, penalties were required to separate them, and where for Italy only Andrea Belotti and, entirely unexpectedly, Jorginho saw efforts saved by Pickford, Marcus Rashford struck the post, and Jadon Sancho and Bukayo Saka were denied by Gianluigi Donnarumma. Saka's, cruelly, was the miss that sealed a 3-2 shootout victory for Italy – whose achievement in winning after their inability to qualify for Russia 2018 should not be overlooked – and at the end of a competition in which he had been so essential to England's success. "You have to feel that disappointment because the opportunities to win trophies like this are so rare in your life," Southgate said. "But when they reflect on what they have done, they should be incredibly proud of themselves. The players have been an absolute credit. They have given everything they possibly could." His opposite number, Roberto Mancini, said: "Seeing everything we have managed to create, all of the hard work we have put in over the last three years, specifically the last 50 days which have been very hard. They have really created something which can never be separated going forward. They will always be synonymous with this triumph."

Roberto Mancini organised Italy into a 4-3-3 formation led by the front three of Federico Chiesa, Lorenzo Insigne and Ciro Immobile. Their opponents, England, defended with a 5-2-3.

Owing to the influential Jorginho being aggressively pressed, Marco Verratti withdrew into deeper territory to often became their deepest-positioned midfielder and to link with their central defenders. Their third central midfielder, Nicolò Barella, advanced to link with Chiesa, who offered a direct threat towards the right with his runs in behind England's defence. From towards the left Insigne drifted into the inside channel, and Emerson Palmieri advanced to provide their width, and therefore was often targeted by Leonardo Bonucci's direct forward passing when England committed to a higher defensive press or to avoid the numbers that existed in the centre of the pitch.

When Italy attempted to build possession from deeper territory, England worked to cover their access to the centre of the pitch. Kalvin Phillips' individual pressing – mostly seen when Italy adopted a double pivot or his closest opponent withdrew to receive – was particularly assertive. Italy also regularly adopted a back three against England's deeper defending and given their increased grasp of possession. Immobile's willingness to withdraw into midfield increased their fluidity there, and their ability to penetrate through England's front three, but at the expense of a presence around England's three central defenders – and to the extent they often resorted to optimistic strikes from distance, or crosses from wide.

Barella's movements towards the ball complemented Verratti and Jorginho, and contributed to The Azzurri starting to progress the ball through the centre of the pitch before then working it away from England's central defenders when prioritising combinations through the inside channels. Their ongoing dominance of possession meant Chiesa continuing to threaten, and creating opportunities to shoot at goal.

When Bryan Cristante and Domenico Berardi were brought on, Insigne adopted a more central, deeper position, and Chiesa moved to the left. Diagonal runs were being made from wide and across England's back five; Insigne was positioned alongside Italy's most advanced central midfielder, and with Chiesa remaining wide, Emerson operated more centrally. From the left, Chiesa was presented with a better angle to attack goal and to play crosses towards the far post, leading to Jordan Pickford being tested more, and ultimately the corner from which they scored their equalising goal.

England adopted a back four and strove to press from deep inside their own half against Italy's rotations through the centre of the pitch. When Chiesa was substituted Italy then lost one of their most influential players, and therefore became more reliant on Berardi to lead their counters. Andrea Belotti replaced Insigne and started to feature as their striker – Manuel Locatelli also replaced Verratti in midfield – and presented an alternative route forwards amid their reduced possession. He linked play into their wide players, and directly from their central defenders and through England's defensive block.

England were organised by their manager Gareth Southgate into a 3-4-3 formation in which Kieran Trippier, Declan Rice, Kalvin Phillips and Luke Shaw featured in midfield. Their opponents, Italy, defended with a 4-1-4-1.

They took the lead in only the second minute when, after Harry Kane withdrew into deeper territory, Trippier broke on the right and delayed crossing until there were enough runners reaching the penalty area, and Shaw was presented with the chance to volley in, which he did superbly. Shaw and Trippier continued to provide England's attacking width; Mason Mount and Raheem Sterling operated in the inside channels, and Phillips offered delayed, central runs.

Kane continued to drop and to offer England's most effective method of advancing possession, via their switches of play. His movements away from Italy's central defenders presented England with an additional figure between Jorginho and Marco Verratti,  and therefore helped them to play the ball around the aggressive press that was being applied in midfield.

With Sterling occupying Emerson, Trippier continued to relish significant space on the right; Kane and Kyle Walker both regularly fed he and Shaw. From the left, Shaw received in wider territory, and from somewhat more infield Mount made  runs in behind and received passes towards the touchline while attempting to combine instead of to provide crosses into the penalty area.

England also attempted to play direct balls from their defenders and goalkeeper Jordan Pickford, and where possible to avoid playing them close to Leonardo Bonucci and Giorgio Chiellini. When they did, Sterling and Mount moved more centrally to attempt to secure second balls, which was crucial in the attacking half, and there were also times when Kane impressively duelled against those two central defenders to win the first contact, most commonly doing so when England countered, given they had less possession than their opponents. That he was outnumbered ultimately meant that there were many times Italy instead regained the ball.

It was when winning their individual duels and when direct passes over Italy's front line succeeded that England's attacking play developed. Rice and Phillips contributed to them progressing through Italy's defensive block – particularly when Mount and Sterling had moved deeper to overload Italy's midfielders – but England then lacked the numbers to penetrate further forwards. There were occasions runs in behind from Sterling and Mount threatened, but they then weren't complemented with the correct pass, and therefore possession was recovered by Italy's defence.

When Bukayo Saka replaced Trippier, after Italy's equalising goal, England reorganised to adopt a 4-3-3. Jordan Henderson also replaced Rice, and Phillips became their deepest-lying midfielder, so Italy's high press focused on limiting the link into him from England's back four, in turn leading to England prioritising passes to between wide forward and central midfielder.

From their new shape, England's central defenders advanced into midfield to contribute to them more effectively building out of their defensive third. Against one striker, switches of play across England's defence before their drives forwards also proved effective.

When Italy's wide players adopted narrower positions and pressed infield, England built around and into their full-backs – particularly Shaw, who advanced even further than did Walker. Saka and Sterling also remained wide to receive the ball and draw Italy's full-backs out of position, and then turned infield and aggressively drove forwards. It was from the left where Sterling was positioned and where Mount also moved wider that they posed their greatest threat.

Jack Grealish then replaced Mount; when he did so, Sterling attacked from the right and Saka featured as their left-sided attacking central midfielder. When Grealish drove across to support on the right they progressed through the final third, but the final pass or shot was absent against Italy's experienced low block.