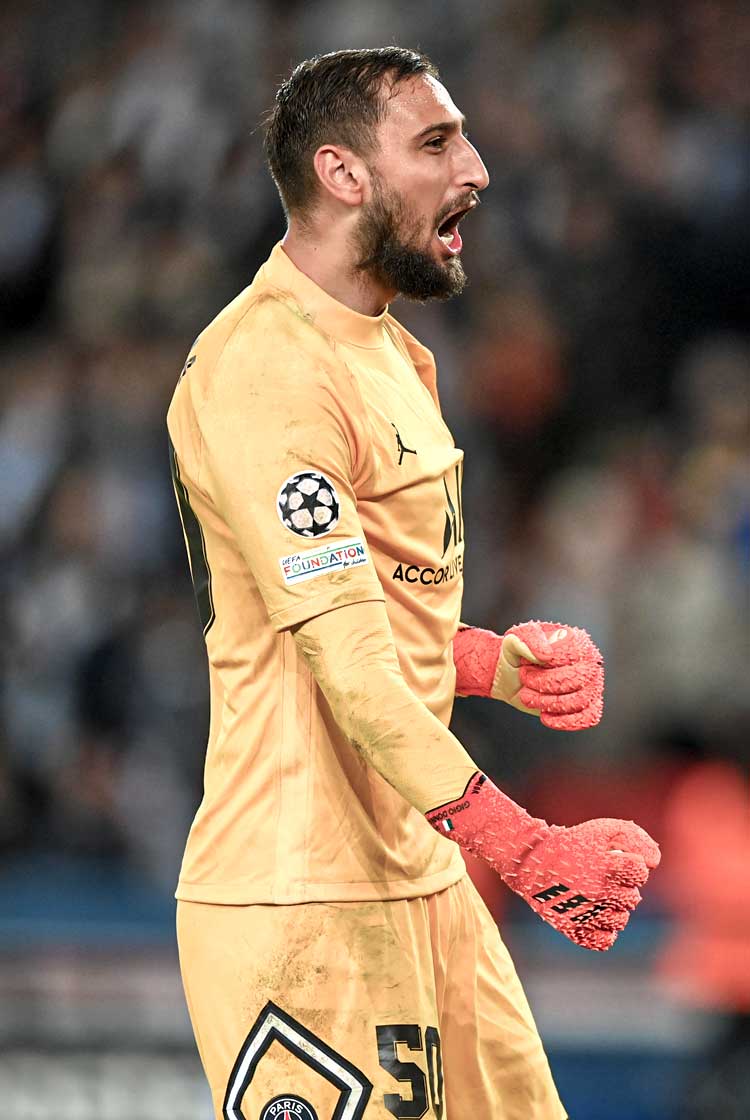 Profile
Having made his competitive debut for Milan at just 16 years and 242 days old, Gianluigi Donnarumma broke through at an astonishingly young age. Even more remarkable than that, though, was how quickly he established himself as his club’s first-choice goalkeeper ahead of the hugely experienced Diego López and Christian Abbiati.

In a position in which experience is often valued over the freedom of expression of youth, Donnarumma’s rise is particularly impressive. By his 20th birthday, he was first choice for the Italy national team, with the Azzurri head coach Roberto Mancini describing his number one as “the strongest goalkeeper in the world.”

Donnarumma was named Serie A’s goalkeeper of the season in 2020/21 and then Player of the Tournament as Italy won Euro 2020. Following that success, he completed a move to Paris Saint-Germain on a free transfer. With so much of his career ahead of him, Donnarumma is already right at the top of the game and well on his way to becoming an all-time great.

Tactical analysis
Donnarumma is a physically imposing goalkeeper who dominates his penalty area and provides a significant barrier in front of goal. He oozes confidence – perhaps owing to his breaking through as a professional at the top level at such a young age – and is always ready to come off his line and take action to keep the ball away from goal.

He plays on the front foot, and will often start with a high position, primed to step out and catch the ball. He is decisive in making calls as to when to come off his line, and once he has committed to leaving his goal he will usually achieve what he set out to do. Often, this is catching the ball and holding on to it, but Donnarumma is also very effective at punching the ball clear. He is such a powerful figure that he is able to push past players who are in his way before stretching out a long arm to get a fist on the ball.

He shows brilliant hand-eye coordination in these situations, able to get good contact on the ball and impressive distance on his punches even when it appears as though he has little chance of reaching the ball. He often starts a few yards further away from his line than other goalkeepers, who might take a little more conservative approach; his starting position will often give him an advantage in any attempts to come off his line (above).

It is, however, his shot-stopping ability for which he stands out most. He has exceptional reflexes and is adept both when facing close-range shots and shots from distance. As an opponent sets themselves to shoot, Donnarumma will get into a low position and make sure he is on his toes as the shot is taken (below). This gives him the best chance of reacting to the shot, and he is capable of using his arms and his legs to keep shots out. His technique is particularly useful when facing shots from close range, and he keeps out an impressive proportion of the shots he faces, often with eye-catching saves.

When it comes to long-range efforts, it is extremely rare to see Donnarumma beaten. At 6’5” and with a broad frame, he already takes up a lot of the goal, and he has a vast reach, too. On top of all of that, he is extremely agile, and he shifts his weight well to spring across goal and cover every corner of the net. He has very good footwork, too, and all of these attributes add up to a goalkeeper that is very difficult to beat from distance. As we saw in the penalty shootout after the Euro 2020 final, in which Donnarumma saved crucial spot-kicks from Jadon Sancho and Bukayo Saka, he is also a formidable force when facing penalties.

If he was to have one weakness, it is that he will very occasionally overcommit when making an attempt to win the ball. Though he has a lot of success when claiming aerial balls, he does sometimes struggle down low. There have been occasions when he has dived at the feet of an onrushing attacker in a one-on-one situation in an attempt to smother the ball when he would be better off staying on his feet and the opponent has been able to dribble around him. He also too readily attacks low crosses when it would be better to stay on his line. His judgement of the ball’s movement when it is down low is far worse than when it is up high.

Role at PSG
In a team that dominates the ball as much as PSG, Donnarumma is expected to provide the starting point for much of their attacking moves. He is confident with the ball at his feet and capable distributing with either his right or his left. He almost exclusively passes the ball short to one of the centre-backs because PSG almost always look to build from the back. He is happy to invite pressure to draw an opponent towards him so that another teammate is free to either receive a direct pass from the goalkeeper, or to be found via another player. When the latter happens, Donnarumma will instruct the player he is passing to where the next pass should go (above). His confidence can sometimes lead to him inviting too much pressure, though, and although he rarely makes catastrophic errors, he does sometimes sail too close to the wind with his distribution.

At Milan, he often drew an opponent in before clipping a ball forward towards a big striker such as Zlatan Ibrahimovic, but at PSG there is far more focus on distributing short, with the likes of Kylian Mbappé, Lionel Messi and Neymar providing little in the way of a physical target for long balls up field. That said, when he has the chance to kick the ball long, he has the ability to target specific spaces and can launch counter-attacks as a result.

Donnarumma is a leader despite his age, and he is a vocal player who issues instructions to his defenders constantly and organises his team to give his goal the best possible protection. He isn’t overawed by having moved to a team full of stars like PSG’s, and will happily give out orders to the senior defenders in front of him.

He has had to adapt from playing in an AC Milan team which concedes a relatively large number of shots to a PSG side that dominates games and does not allow their opponents many attempts on goal at all. That means longer periods for Donnarumma in which he has very few saves to make.

Many of the goals he concedes at PSG come through opponents exploiting the space behind their full-backs. This often requires a centre-back to push out wider, leaving the other centre-back isolated against a forward. Donnarumma has been beaten several times following a run across goal from a forward and a whipped ball into the box (above), suggesting he has a slight weakness when the ball is played across him.

Donnarumma is an exceptional talent who will certainly add to his Euro 2020 winners medal before long, and longer term, he may well threaten Gianluigi Buffon’s record of 176 Italy caps. Still in his early 20s, Donnarumma is a legend in the making.