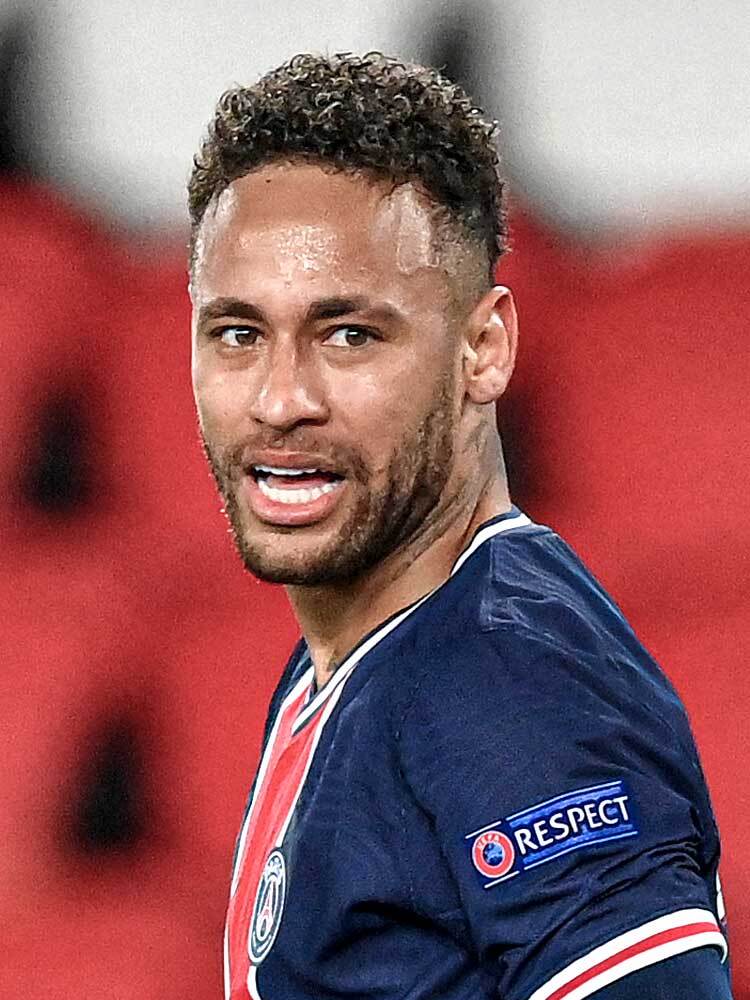 Profile
Brazil and Paris Saint-Germain star Neymar has faced his fair share of doubts and criticism in his career, but even against the backdrop of scrutiny that has come with  his world-record move from Barcelona in 2017, he continues to prove himself among the best in the world. He and Kylian Mbappé form one of the most dangerous attacks around, and Mauricio Pochettino is the manager now tasked with bringing out the best of those two players.

“It’s so easy with Neymar because you don’t need to do too much,” Pochettino said. “From day one, he’s been very open. He’s very humble, he listens and always accepts all (my) instructions in a very good way. Brazilian players have something special inside.”

Tactical analysis
Neymar is an exceptional footballer who is at his best playing off the left but with the freedom to roam into central areas consistently. He constantly looks for the ball to feet and will move away from the left flank in search of it. His explosive movement and nimble changes of direction make him difficult to track even before he receives a pass, ensuring that he often does so in space, as well as a long way from his starting position. When the ball does reach him, he gives his opponent further problems with his ability to feint and move his body to throw a defender off at the point of his first touch.

His doing so creates space for him early on once the ball has come his way, and encourages him to dribble immediately. He is one of the best dribblers in the world and can move the ball around to incredible effect, and his agility, balance, close control and ability to play off either foot makes him difficult for opponents to anticipate. His preference is always to cut inside on to his right foot, but given he is almost as capable with his left, it is incredibly hard to predict which way he will go. Defenders often choose to double up on him to reduce his chances of beating them.

That might discourage some players from taking defenders on, but Neymar is to take up the challenge of several opponents, and he often manages to worm his way past several defenders in impressive fashion. His dribbling is regularly thought of as showboating, but it is primarily a hugely effective way of progressing his team up the pitch. Moreover, the fact that he draws so many opponents towards the ball means a teammate will be free somewhere else on the pitch. His ability to release the ball and find a teammate with a clever pass when surrounded by opponents is hugely beneficial as a result (above).

He is also willing to withdraw into midfield to help his team find a route beyond the opposition’s midfield line, and is happy coming into central positions between the lines to receive the ball and turn. When in a central position he likes to turn to face goal as quickly as possible and drive forward with the ball, drawing defenders out of position and looking to slip a teammate in on goal, sometimes having moved all the way across to the right flank (below).

Neymar is also an adept finisher, particularly when coming off the left side of attack. When attacks are building from the right, he times his runs towards the back post well. He is skilled at working himself a shooting opportunity when faced with a crowded penalty area, and even more so when he can isolate a defender. A whipped finish across goal into the far corner is a common sight when Neymar is playing.

One significant weakness of his is his temperament. He is guilty of getting too fired up too often, and has been known to lash out in moments of madness. Red cards are far too regular an occurrence.

Role at Paris Saint-Germain
As was the case in Spain, during his time in Paris, Neymar has most consistently been given a role on the left side of attack. His first manager there, Unai Emery, mostly favoured a 4-3-3 formation; Emery’s successor Thomas Tuchel also played a 4-3-3 but also experimented with a 4-4-2 that became a 4-2-2-2. In that latter formation, Neymar often played up front alongside Kylian Mbappé, but there were also times when he played as one of the two behind Mbappé and Mauro Icardi. Under Mauricio Pochettino, however, PSG have gone back to one up front, most commonly in a 4-2-3-1 formation.

Neymar has almost exclusively played on the left side of the attacking midfield three, but with plenty of licence to move off the flank. The Brazilian will regularly join Mbappé in attack, but will more often be seen coming into central positions in midfield or between the lines to try and dictate the team’s attacks.

With the left-footed Ángel Di María coming off the right flank, the width is provided by their advancing full-backs – with Alessandro Florenzi and Mitchell Bakker both happy to take up the invitation to get forwards.

Neymar does provide a goal threat but he does a great deal of his work in deeper positions, and provides a vital link to Mbappé, who will constantly look to get in behind the opposition. Mbappé often pulls out to the left to take advantage of space Neymar has created by dragging the opposition right-back out of his slot, and PSG’s midfielders will regularly play passes into that space for Mbappé to chase. The Frenchman playing so high up the pitch has other benefits, in that it pushes the opposition’s defenders back, and creates more space between the lines for Neymar to operate.

When he comes into deeper positions, Neymar can also switch play effectively to look for a runner on the right (above). He shows brilliant weight of pass when doing this, and can play deft long balls over the top of an opposition defence to devastating effect.

The security of a double pivot at the base of midfield means Neymar is among a group of attackers with a lot of freedom, and although he does show diligence when asked to retreat into his team’s out-of-possession shape or to press from the front, he will always have attacking transitions in mind when PSG are defending. When they regain the ball, Neymar will often be the player to receive the first pass, and his first thought at the moment a teammate regains the ball will be to sprint forwards into space.

A once-in-a-generation talent who has inspired each of his clubs to significant success, Neymar still faces criticism from some who think he is little more than a show-boater. The truth is, however, that he wouldn’t have hit the heights he has without being a phenomenal player. He will continue to be the main man for club and country for years to come.