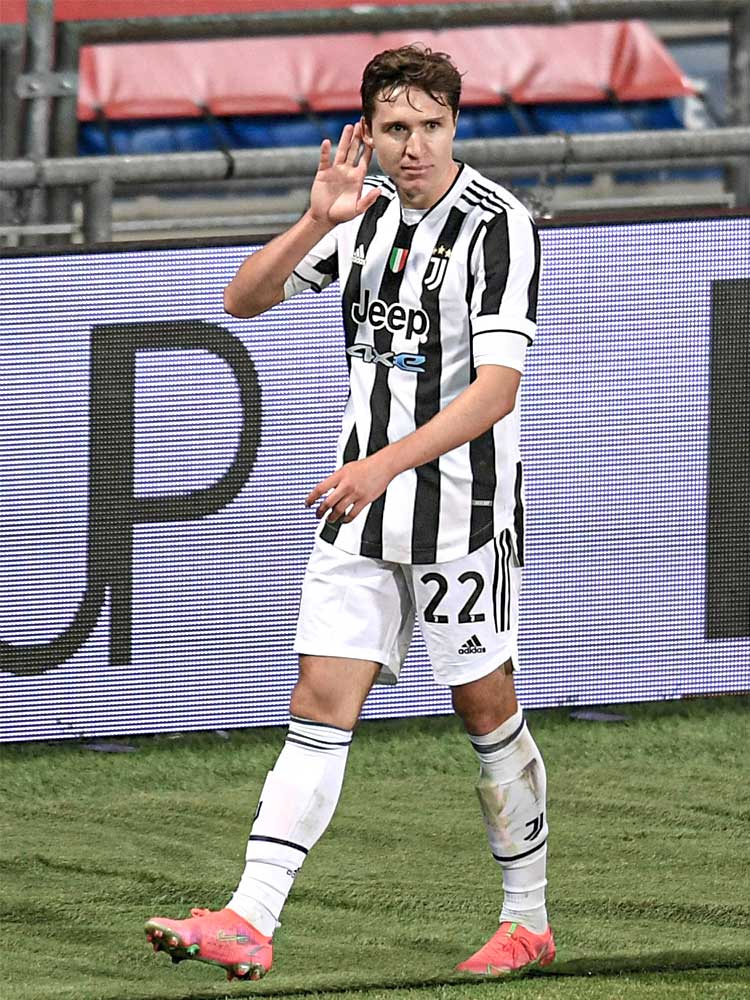 Profile
Federico Chiesa could cost Juventus an eventual £54.4m if they exercise their option to sign him on a permanent basis from Fiorentina. Agreeing a two-year loan – £2.7m for the first year and £6.35m for the second – in the event of him moving permanently from their Serie A rivals, his initial transfer fee will be £36.3m, rising to £54.4m after bonuses.

The promising son of retired Italy international Enrico, Chiesa was 22 when he moved in October 2020, and it is hoped that, alongside Álvaro Morata and Paulo Dybala, when the time comes for Cristiano Ronaldo to move on, he will be a significant part of an exciting new attack. “We signed him so that he could take on men in the final third," said Andrea Pirlo, the manager who oversaw his arrival in Turin. "While his position may change, his role does not.”

Tactical analysis
Chiesa is a proven wide forward capable of playing towards both the left and right. Predominantly right-footed, to the extent the foot he is playing on has a significant influence on both his end product and method of progressing the ball, he can regardless strike well with both feet – particularly when aiming at goal.

When towards the right he is likelier to attempt to deliver crosses, which are more accurate and effective when played low or along the ground (below) than aerially. Though he consistently strikes the ball cleanly, a technique near-identical to that when he shoots is used for his aerial crosses, which can often mean them moving beyond the closest teammate and instead reaching another considerably beyond the far post. His crossing is therefore also often more accurate when he is under pressure from an opponent than driving through space, when the excessive power he often uses can undermine his delivery.

If instead crossing from the left, Chiesa regularly plays the ball diagonally infield, and then supports his delivery by running in the very same direction. Though doing so perhaps makes him predictable, his pace from a static start, and agility as he weaves between opponents before making himself available for the return pass, regularly succeeds. An alternative approach involves him playing penetrative passes to between the relevant full-back and central defender, ordinarily by having created the most suitable angle by moving towards his right. Should that pass remain too ambitious, he will instead attempt a deft chip.

When he is the one shooting (below), that same ball-playing technique is a strength because it ensures he maintains his accuracy wihout him having to adjust to ensure power while placing the ball. His focus is on hitting the target, which he can do from a variety of angles, in contrast to attempting to deliver into the path of a teammate's run.

His agility, both on and off the ball, is a significant strength, and contributes to his ability to play on both the left and right. Capable of weaving past opponents with the ball at his feet and of making touches from in to out and out to in, even if opponents can predict his intentions they are regularly sent both backwards and sideways by his movements.

Defenders similarly struggle with his dynamism and the explosive nature of his movements when they attempt to jockey him, and to the extent that Chiesa often succeeds in moving them off-balance. It is at that point that he then replaces his admirable close control with bigger, more aggressive touches and a change of pace to more quickly progress the ball.

Role at Juventus
Chiesa has featured on both the right and left of what has mostly been Juve's 4-2-4, in which he prioritises supporting the favoured front pairing of Ronaldo and Morata. When selected towards the left (above) he is considerably likelier to play into feet – a strength of Juve's structure involves one of that front two drifting wide to combine with the relevant wide player while the other remains central to occupy opposing defenders, to make runs beyond, or to attack crosses.

It is more regularly Morata who moves wide, and Ronaldo who remains central, but there are also occasions when the Portuguese moves to combine with Chiesa. The far-side winger, responding to Morata or Ronaldo moving wide, also drifts infield to contribute in stretching and occupying defenders, and to potentially provide a further option for Chiesa to target.

A central midfielder is also instructed to make runs to support Chiesa when he is wide on the left (above), by moving through the left inside channel. Runs from Adrien Rabiot and Rodrigo Bentancur proved effective throughout 2020/21; Chiesa's passes over opposing defences were regularly played into their path, if the striker moving to combine with him was not instead his target.

If operating from the right (below), Chiesa focuses on driving and dribbling at his opponent, and instead of looking for earlier passing options, on retaining the ball for lengthier periods. That that is the case means the right inside channel is occupied considerably less; fewer runs are made there from those in central midfield, potentially leaving the opposing left-back more exposed to Chiesa and having increased space in behind to defend, and Chiesa, in turn, having increased space to attack into.

When he is the player carrying the ball forwards, the presence of two strikers provides Chiesa with two options – ones he is more effective at taking by playing the ball along the ground or in the air towards the back post. Both Ronaldo and Morata are capable of attacking both, ensuring that as a trio they consistently complement each other.

Furthering the extent to which he does, Chiesa also contributes a reasonable number of goals, most commonly doing so after combining infield via short passes and then following the ball. He produces a variety of finish from both sides of the pitch, and adapts and moves around Juve's two strikers as he does so, in the same way he contributes at the second phase of attacks and works to take defenders away from Morata and Ronaldo with his movements in the penalty area when they are the ones seeking to apply the finishing touch.