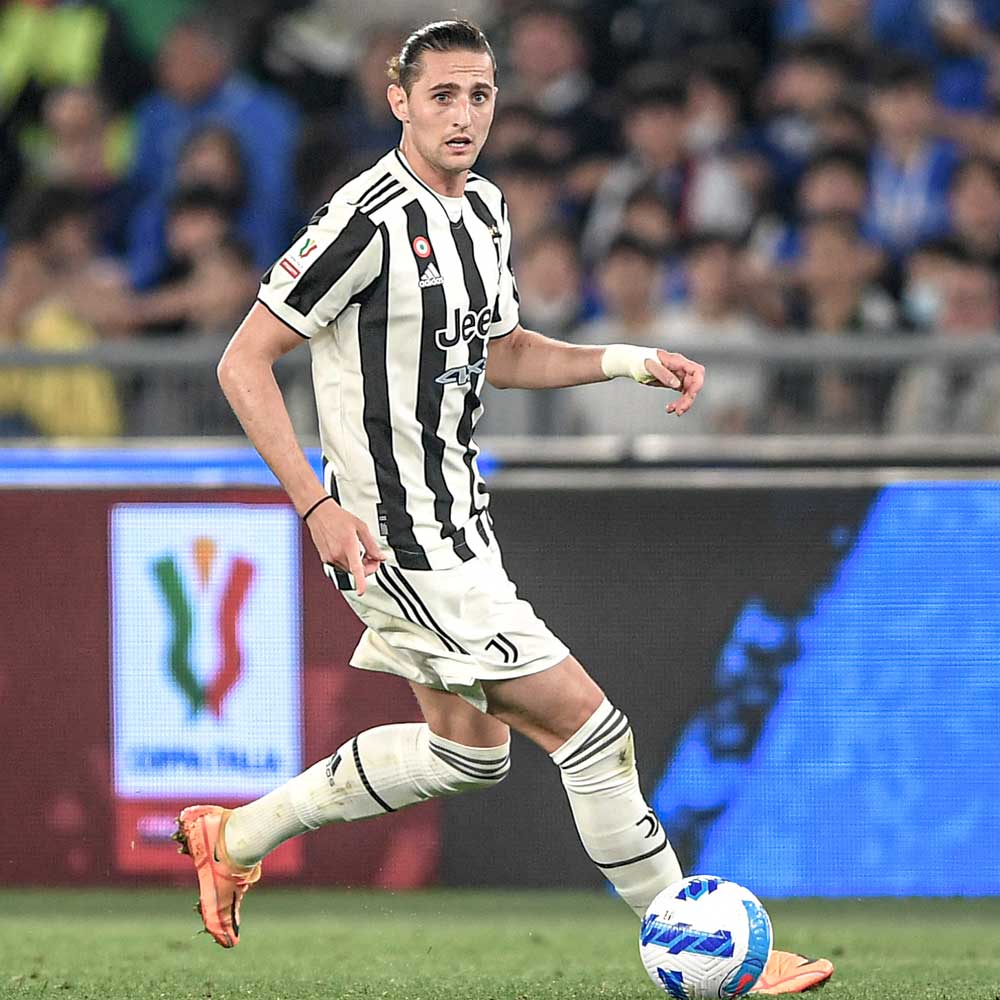 Profile
Despite a decade spent at two of Europe’s biggest, best and most successful clubs, a decent international career with one of the most talented teams on the planet, and 24 trophies to his name, it could be argued that we’re still waiting to see Adrien Rabiot fulfil his potential. Years of speculation over a move to the Premier League continued through the summer of 2022, when Manchester United were persistently linked with the midfielder, but now it appears as though his wait for a move away from Juventus will go on.

Having won five league titles with Paris-Saint Germain and another one at Juventus, he will bring experience and a winning mentality to any midfield, but it remains to be seen what level he will play at for the remainder of his career. Despite his success so far, he still has plenty to prove.

“He is a complete player, I have rarely seen someone so strong both physically and technically,” said Andrea Pirlo, who managed Rabiot at Juventus. “He doesn’t even know the potential for improvement he can have, and we work on the mental side of things to make him understand that he is a champion.”

Technical analysis
Rabiot is a versatile left-footed midfielder who has spent most of his career in central midfield. He has experience as the deepest player – both as a single pivot in a 4-3-3 or a double pivot in a 4-2-3-1 – and as in a more advanced central midfield position, usually in a 4-4-2. More recently, though, he has learned a new role on the left side of midfield.

He is useful on the defensive transition due to his good reading of the game, and he recovers quickly back into position efficiently to guard against counter-attacks. He covers ground quickly due to his long stride, and is effective when moving across the pitch to stop attacks in the wide areas. This means he is able to cover behind his team’s advanced full-backs, which means the centre-backs can hold their position, and not get dragged out of position, leaving gaps closer to goal.

PSG and Juventus , the two clubs Rabiot has spent most of his career at, dominate possession against the majority of their domestic opponents, and his ability on the ball makes him well-suited to playing for teams like these. He is able to offer support underneath the ball, which allows others to rotate, and also means the more attack-minded players can recycle play through him and change the point of attack quickly. When Rabiot changes the pace of an attack, speeding up his team’s play with a clever, quick ball forwards, he displays some of his best passing qualities.


Rabiot’s defensive qualities are also of use in a deeper role. He uses his upper-body strength to move opponents off the ball and to disrupt attacks. He is also smart with his pressing, regularly showing a good understanding of the best angle of press to prevent the opposition progressing and to reduce the space his opponent has to operate in. Then, when he gets close enough to engage the ball carrier in a physical duel, he uses his strength to his advantage.

Rabiot can protect the ball well when under pressure and when passing options are unavailable, and he is happy to hold on to the ball when others might panic into attempting a difficult pass. Instead, he uses his arms and core strength to hold off opponents and create a passing line, and this strength means he can maintain his technique while under pressure from an opponent. However, his awareness of what is around him isn’t always the best, which means there are times he loses the ball too cheaply.

When in possession, Rabiot will often look to combine with his closest teammates, and rarely break lines with incisive passes that split several opponents. He offers more penetration though his off-the-ball runs, especially from a position in the left inside channel to receive while running forward. His ability to hold off opponents and protect the ball is useful here, and he uses his arms, pace and strength to good effect when receiving on the run. He will occasionally beat an opponent by knocking the ball past them and running through into space, with his well-timed changes of speed particularly effective.

Rabiot's forward runs are also very important from a tactical perspective, as he is a willing runner and his movement creates space for others. He will also adapt his off-the-ball movements depending on who has the ball and where they are on the pitch, changing his position constantly to help the team progress forwards.

In the final third, he is best when he moves out to the left or takes up a position in the left inside channel. Here, he provides powerful, whipped crosses which are most effective when he has a centre-forward who is strong in the air to target. When in central areas in the final third, his passing can be low on detail, which may be at least part of the reason behind his low assist return. In 94 Serie A appearances for Juventus between 2019 and 2022, Rabiot registered only five assists.

Playing in central midfield
Rabiot predominantly played in central midfield for Juventus and PSG, but has always drifted out to positions on the left. He rotates with teammates on that side by sliding across the pitch or by dropping deeper to give his team’s left-back – most recently Alex Sandro or Luca Pellegrini – licence to overlap. This movement then allows the left-sided midfielder to invert into the inside channel, in much the same way that Jordan Henderson does on the right for Liverpool. Like Henderson, Rabiot provides security underneath the ball and cover on the transition should possession be lost.

When playing as a pivot, Rabiot provides decent protection for his centre-backs, but in possession, he sometimes lacks the ability that elite deep-lying midfielders have. He does not make the kind of subtle movements that the best players make in this position. His body shape also lets him down, as it means he cannot consistently turn and progress the ball forward, so he bounces the ball back to his centre-backs too often.

He is more effective when playing as part of a double pivot, as he then has a teammate close by who he can find with an immediate lateral pass to escape pressure. When his teammate in the pivot receives the ball, Rabiot is more effective, because he then provides his line-breaking movements to try and receive beyond the opposition’s midfield line. After receiving, as he is then on the move, he is encouraged to play forward himself, too – an area of the game in which he could do with improving.

Left side
In 2021/22, Rabiot was used on the left side of a midfield four, which meant he no longer needed to drift wide from central midfield. He was comfortable taking up a wider position when his team had possession, while he also moved off the flank to receive in the inside channel. When Juventus dropped back into two units of four for prolonged spells out of possession, he provided solid protection for the left-back.

With the ball, Rabiot positioned himself slightly higher than the central midfield pair, but coming infield enough that there was space out wide for Sandro or Pellegrini to overlap and get into a position to cross. Rabiot then provided support behind the full-back to receive a return ball or, if he got on the ball and chose to ignore the overlapping left-back, he could play reversed balls into the deeper of Juventus’ two centre-forwards. He could also look to play passes for a run beyond the opposition’s defence, or find the feet of the closest forward before then looking for a return ball. However, the fact that he was often receiving in a higher starting position than when he received on the move, meant he sometimes struggled to progress play.

Clearly, after a decade spent at PSG and Juventus and with six league titles to his name, Rabiot has qualities and experience to continue playing at the top level. He has a varied skillset and plenty to offer a new club, but he nonetheless still has plenty of doubters, and a lot left to prove, not least if he has the attitude to extend his elite-level playing career.