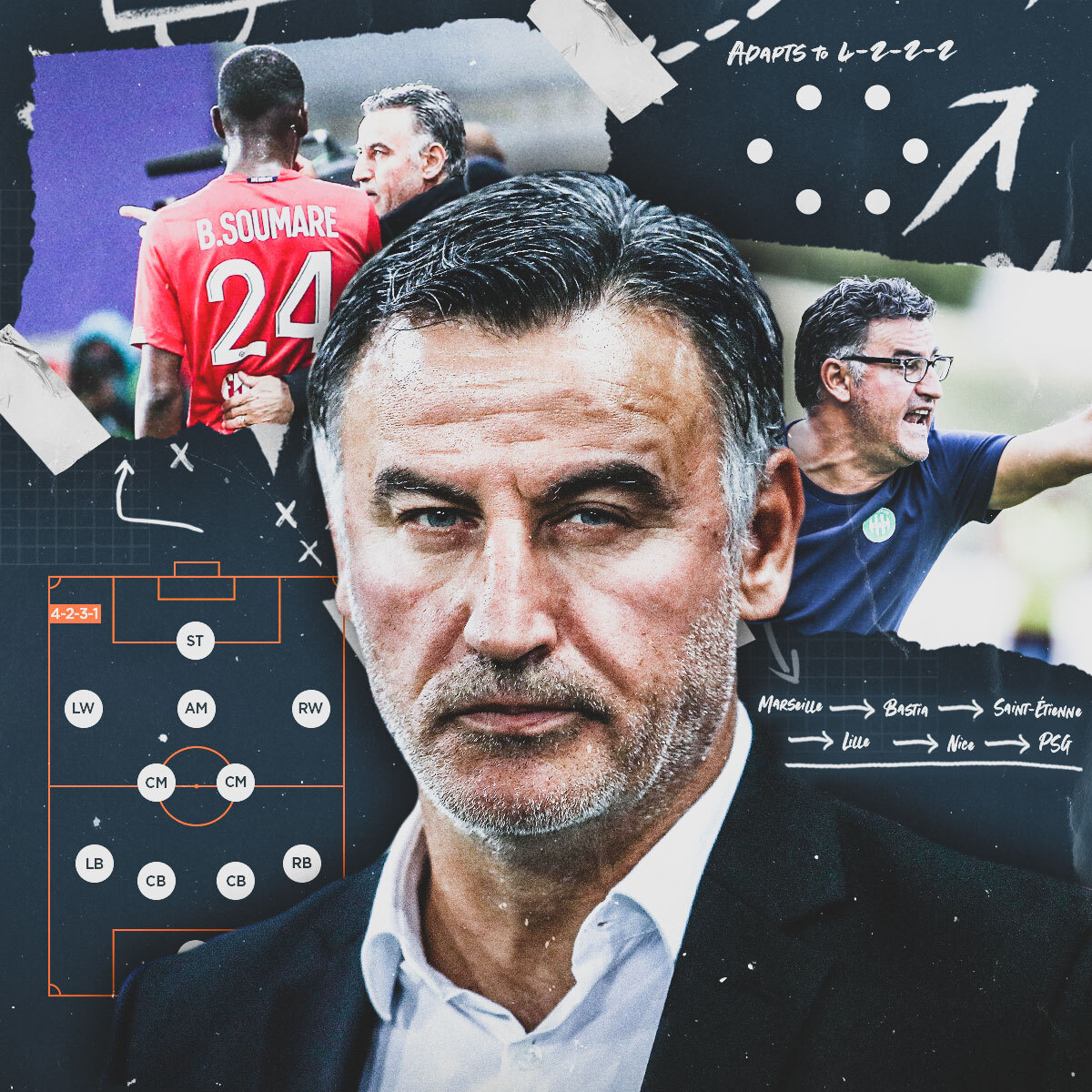 Christophe Galtier has worked his way up to the very top of French football. Having enjoyed a fairly unremarkable playing career, he got his first managerial role with Saint-Étienne in 2009, taking over with the team at the wrong end of the table but beating the drop. He quickly turned the club's fortunes around and impressively established them as a top-half team in Ligue 1 over the course of seven more years there.

His greatest achievement, though, came at Lille, who he saved from relegation before then finishing second in his first full season in charge. He then led them to an unlikely title, beating his new club Paris Saint-Germain to top spot. It was in all probability that success that convinced PSG to replace Mauricio Pochettino with Galtier, who is now tasked with ending the club's wait for Champions League glory.

"I am delighted to join Paris Saint-Germain, I would like to thank the chairman and the club for their confidence in me," said Galtier following his appointment on a two-year deal in July 2022. "I am fully aware of the responsibilities involved in coaching this extraordinary team, which is one of the most competitive and spectacular squads in Europe. My focus is on ambition, hard work and making the most of the team’s potential."

Galtier spent eight seasons with Saint-Étienne, having taken over midway through 2009/10 with the club fighting for Ligue 1 survival. He secured safety with a 17th-placed finish, and then improved the team’s fortunes to such an extent that they finished in the top half for the next seven seasons, before his departure in May 2017. That run included a fourth-place finish in 2013/14, as well as a first major trophy in 32 years, with a triumph in the Coupe de la Ligue in 2013.

Throughout his time at Saint-Étienne, but even more so in his later years there, Galtier’s success was built on the solid foundations of a tight defence rather than free-flowing attacking football. In 2015/16, for example, his side scored only 42 goals in 38 games in finishing sixth. Eight of the 14 teams that finished below Saint-Étienne that season scored more goals. In his next – and final – season, his team scored just 41 goals over the course of the season and still finished eighth.

In those campaigns, he used a 4-3-3 when he wanted to play with a single pivot, and changed to a 4-2-3-1 if he wanted the security of two players in defensive midfield. Much of his team’s attacking play was based around the movements and rotations of the full-backs and wingers. Whenever the winger stayed high and wide, the full-back was more reserved, allowing for aggressive central-midfield runs through the inside channels – either from the number 10 and one of the double pivot in the 4-2-3-1, or both number eights in the 4-3-3.

Crosses were a big part of the team’s game in 2015/16 in particular, with Benoît Assou-Ekotto and Kévin Monnet-Paquet key in holding the width on the left (above) and Kévin Théophile-Catherine and Romain Hamouma doing the same on the right. The following season saw a drop in the amount Saint-Étienne built out wide, with the deepest central midfielder often dropping to help support the back line and build through central areas more consistently.

Galtier took over at Lille midway through 2017/18 and – just as he had done at Saint-Étienne – led his new club to safety after taking over when they were in real trouble. Once again, remarkable improvement followed. His side finished as Ligue 1 runners-up in the following campaign, before coming fourth in 2019/20. Then came an historic, against-all-odds title win in 2020/21, to deny a dominant PSG an eighth title in nine seasons.

Galtier used a double pivot in a 4-2-3-1 in his first two full seasons at Lille. Then, that formation was adapted to a 4-4-2 structure that ultimately led to them winning the title in 2020/21. This formation was built around the centre-forward pairing of Jonathan David and Burak Yilmaz, who scored 29 league goals between them in the title-winning campaign. It was here that Galtier really showed his tactical versatility.

Unlike Saint-Étienne, Lille did not use crosses much at all. Instead, they relied heavily on central combinations, incisive through balls and runs in behind. Yilmaz, who was the wrong side of 35 at the start of that season, often dropped towards the ball to link play, with David providing runs in behind (above). These opposite movements were hugely effective at pulling opposition centre-backs apart.

Wingers Jonathan Bamba and, when he played, Jonathan Ikoné added more runs targeting the spaces in behind. Both bent their runs across the defence to try and get close to David and increase the team’s central presence in attack.

The double pivot in central midfield was made up of two of Renato Sanches, Benjamin André, Boubakary Soumaré and Xeka. One of these players was always encouraged to get close to Yilmaz, while both members of the double pivot looked to provide through balls and aerial passes in behind for central runners.

When Luiz Araújo played on the right, he liked to move inside or hold his position rather than provide runs in behind. This added an extra player in central midfield when facing opponents who played with a midfield three. Despite reducing the numbers  providing a threat in behind, Araújo's positioning helped Lille connect with the front line. They often adapted into a 4-2-2-2 as a result of this, with Araújo moving close to the withdrawn Yilmaz ahead of the double pivot, and David joined up front by the winger from the other side. Opponents consistently struggled to deal with these rotations and Lille's central threat, though Galtier’s side scored a relatively modest 64 goals as they won the title. That was 17 goals fewer than Lyon, who finished fourth.

Galtier then spent one season with Nice before his recent move to PSG, finishing the 2021/22 campaign in fifth place and as runners-up in the Coupe de France. Galtier stuck with the 4-4-2 structure he had used at Lille, with left winger Justin Kluivert providing similar penetrative runs around and beyond the centre-forward pair (above). Two of Amine Gouiri, Andy Delort and Kasper Dolberg played up front, with one of the two always dropping centrally to pull the opposition centre-backs apart.

Nice put in the second-most crosses in Ligue 1 in Galtier’s sole season there. Kluivert sometimes held his width on the left, supported by an attack-minded left-back in Melvin Bard. However, with one of the centre-forwards – usually Delort – often moving wider after dropping, Galtier’s side also created width on the right. In doing so, the team created an extra option to cross the ball following a rotation with the right-sided midfielder. With the other centre-forward holding their position, Nice maintained a presence in the penalty area, while a central midfielder and the far-side winger were encouraged to join attacks and maintain presence in the penalty area.

Under Galtier’s lead, Saint-Étienne didn’t score many goals, but they were extremely strong in defence, conceding the third fewest goals in Ligue 1 in 2015/16, and the sixth fewest in 2016/17. Without the ball, they set up in either a mid or low block, with both wingers working hard at defensive transitions to get back into a compact defensive shape as soon as possible. Wide combinations were key to Saint-Étienne’s attacking play; the fact that their wide players stayed close to each other in their defensive shape meant they were more effective in transition. The depth of the wingers also allowed the full-backs to narrow in a very compact back line (below).

Saint-Étienne were happy to force their opponents wide, allowing play to progress high up the pitch and relying on the compactness of their back line to protect the area close to goal and deal with any crosses and cut-backs. If necessary, the ball-side member of the double pivot or the ball-side number eight moved out to try and lock play wide and stop the opposition playing back inside.

At Lille, the team maintained its 4-4-2 shape without the ball. The midfield unit defended slightly differently, however, as Galtier used a mid-block. The wingers would drop into extremely narrow positions, especially when the ball was on the far side. This meant two compact lines of four (below), as opposed to just the one at Saint-Étienne.

In this shape, however, the full-backs were more likely to move out to engage in wide areas. Here centre-backs José Fonte and Sven Botman were much more proactive in sliding and pressing across the pitch.

The central midfielders prioritised protecting the central areas, covering the space in front of the centre-backs but also making recovery runs into the back line when the full-backs moved out to press the ball. As a result, the wide midfielders narrowed further, and were in more dangerous central positions from which to launch attacks. Their 4-2-2-2 shape on transition was a hugely effective counter-attacking weapon in Galtier's title-winning Lille side.

His Nice team’s defensive shape was usually a 4-4-1-1, with more of a distinct split in the front line (above). The slightly withdrawn centre-forward helped in transition, acting as a key link for Nice’s wide players and full-backs to find with their first forward pass. The deeper positioning of the withdrawn forward also meant one of the central-midfield pair could drop to cover the spaces between the lines, meaning even more security ahead of and between the two central defenders.

Galtier faces a new challenge managing a star-studded squad at PSG. He has proved at a host of very different teams in Saint-Étienne, Lille and Nice, however, just how versatile and skilled a coach he is. It will be fascinating to see how his PSG team lines up, and how they fare in the Champions League under a coach with little experience on the European stage. That is how PSG managers are judged, and where every one of his predecessors has failed. Time will tell if Galtier can buck the trend.