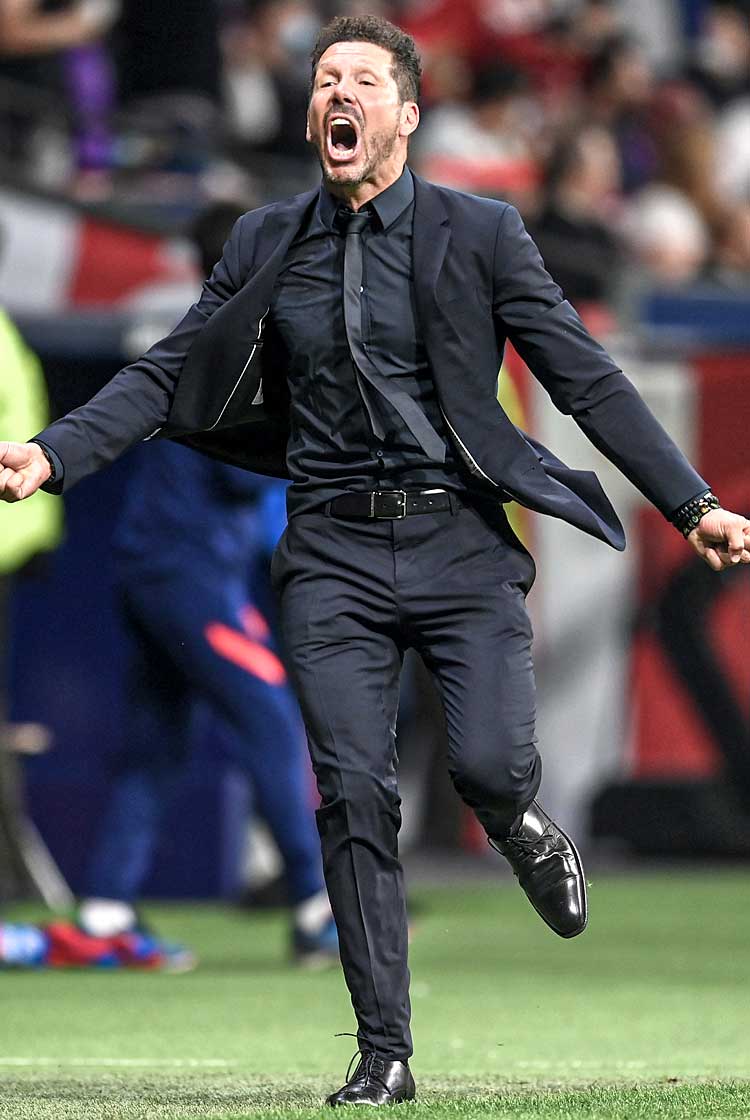 What is playing with 'two up front'?
Playing with two up front means using a formation that has a pair of strikers as the highest players in a team. They play mostly in central areas to occupy opposition centre-backs, and their main responsibilities are creating chances and scoring goals. It is common for teams that play with two strikers to use players whose strengths complement those of their strike partner.

Where does the use of two centre-forwards originate?
As the game progressed through the 20th century, it became common for teams to use more defenders than attackers. This had not previously been the case. The Hungarian Martón Bukovi, a manager through the 1940s, 1950s and 1960s, is thought to have instigated the first move away from the much-used W-M formation, which featured three attackers at the top of the ‘W’. Pushing the two inside forwards higher and dropping the centre-forward deeper served to form a front four. This provided two main central threats, much like we see now, albeit with wingers playing higher than they do now.

Gusztáv Sebes, who led Hungary to the 1954 World Cup final, then moved the full-backs wider and dropped a half-back deeper to form a back four. The other half-back moved forward to join the withdrawn centre-forward, and a 4-2-4 took shape. The Hungary team that demolished England 6-3 at Wembley in late 1963 is one notable example of this set-up.

Other structures with a forward pairing soon appeared. Another Hungarian, Béla Guttmann, took the 4-2-4 to Brazil – and the Seleção subsequently won two World Cups, in 1958 and 1970, using this shape. Russian manager Viktor Maslov then pulled both wingers back but retained the two central strikers, laying the foundations for the modern 4-4-2. West Germany won the 1990 World Cup with two up front, but using a 3-5-2 structure.

What are the in-possession responsibilities of two centre-forwards?
The main objective for any forward is to score goals. However, when strikers are in a pair, there is also an increased emphasis on creating for one another.

This means that it is crucial to be able to receive between the lines, with an awareness of pressure from behind and, while holding defenders off, link play with midfield teammates. Upper-body strength, usually when pinning or holding off centre-backs, is therefore important. But so is the technical skill to use deft touches, flicks, knockdowns, headers and sets to link with runners and a strike partner.

Movements into the wide areas on attacking transition can help relieve pressure on the defence by providing an outlet to receive direct forward passes and instigate counter-attacks. This kind of movement can create space centrally for a wide player to move inside.

What are the out-of-possession responsibilities of two centre-forwards?
The two forwards can cover central access by screening passes into midfield. The closer of the pair will move forward when the ball is on their side, while the second stays deeper and moves across to provide cover. If the ball is switched across the pitch, the two forwards swap roles. The second forward pushes up, while the first drops back and moves into a narrow position to cover.

When pressing higher, a front two will usually press the opposition centre-backs. They can press outwards to force the ball wide, before aiming to stop the opposition from switching play. Alternatively, they can curve their runs and press inwards, forcing play into a central trap. The deeper of the two forwards may then work back to press from behind, as the central midfielders jump to engage the ball-carrier from in front.

Which teams have used two up front particularly successfully?

Diego Simeone’s Atlético Madrid
Simeone has long favoured a 4-4-2 shape both in and out of possession. His team defends in a low or mid block. In attack, they maintain a front two throughout, with the wide midfielders narrowing to support the forwards (above, top). This movement provides space for the full-backs to overlap and cross into the centre-forwards. One of the front two will drop deeper to connect and link with the narrowed midfielders – especially when the central midfielders remain deep, which they often do. In the title-winning 2020/21 season, that was either João Félix or Ángel Correa, who were partnered with Luis Suárez.

Sean Dyche’s Burnley
Dyche has used a 4-4-2 for most of his time at Burnley, operating in a defensive manner similar to that of Simeone. However, unlike Atlético, Burnley play a lot of long passes. One key aspect of Dyche’s style is connecting play with the front two as quickly as possible. His main strikers – Chris Wood, Ashley Barnes and previously Sam Vokes – are all strong in the air. The wingers stay wide, and are supported either by the full-back or the closest central midfielder (above). Overlapping or underlapping runs help to create space wide before a cross is delivered towards the two strikers.

Antonio Conte’s Juventus
Conte has used a centre-forward pairing at many of his clubs. At Juventus, Carlos Tevez and Fernando Llorente complemented one another perfectly at the top of Conte’s 3-5-2 shape. Tevez would drop short to receive between the lines, where he combined particularly well with number eights Paul Pogba and Arturo Vidal. The team’s width was provided by the wing-backs, with Llorente staying high to provide the main target for any crosses. Direct play from the back line or Andrea Pirlo, who played as the single pivot, also made use of Llorente’s physical presence. The Spaniard could secure possession and lay it off to Tevez, the number eights or the wing-backs.

What are the benefits of playing with two up front?
A front pairing occupies both centre-backs when facing a back four, and can also pin a back three. Two forwards provide a significant central presence in attack, without having to reorganise or have players rotate into central areas. Two central strikers can also limit how far an opposing central defender can step out to press and attack players between the lines. This is because, with a front two, there will always be another forward to think about in behind.

Two centre-forwards means the workload for the front line is shared. With a single striker, almost all of the central running in the four moments of the game – in possession, out of possession, defensive transition and attacking transition – is expected of just one player. This can place them under intense physical stress.

Using two strikers often means that the front line can be found earlier, with two players able to compete for and secure forward passes. This is ideal for counter-attacking teams.

What are the disadvantages to playing with two up front?
Playing with two central strikers means fewer players deployed in midfield or defence. This can reduce both the quality and quantity of passes a team makes due to reduced presence around the ball. If a team sets up with sufficient numbers to build from deep, it can leave the front two left isolated.

The two centre-forwards need a good understanding between them, with clear awareness of each other’s strengths. They should focus on creating for each other through on-the-ball actions or unselfish movement off the ball. Some strikers are so focused on scoring goals that they don’t create enough chances for their partner. Inevitably, in this situation, the team’s output reduces as a result.