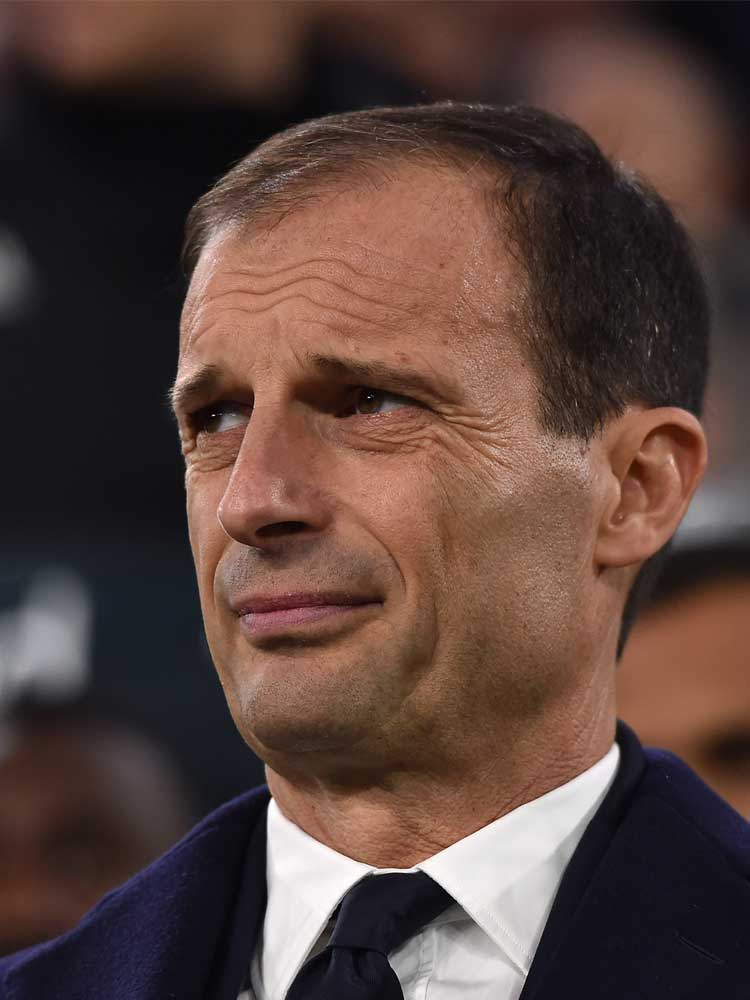 Profile
In the two years after Massimiliano Allegri's departure from Juventus, they first struggled to retain the Serie A title and then, for the first time since 2011, failed to do so. The respected Maurizio Sarri and then the unproven Andrea Pirlo were his successors as Juve's hierarchy targeted winning the Champions League, but instead their fiercest rivals Inter Milan, under Allegri's predecessor Antonio Conte, dethroned them.

Perhaps the biggest surprise surrounding Allegri's return, at the age of 53 in May 2021, is that he had not been tempted elsewhere during those two years, having taken them to two Champions League finals, and overseen four Coppa Italia victories and five successive league titles. "What he achieved in his first adventure at Juventus are engraved in the club's history," read a club statement when his return was confirmed. "We are ready to begin again with Allegri, to build our future together; with his enormous professionalism, his moral strength, with the brilliant ideas of a coach capable of shuffling the cards, both on and off the pitch."

Tactical analysis
During his first spell with the Old Lady, Allegri attempted to build on the strong foundations he inherited from Conte. Prioritising a 3-5-2 built on the revered back three of Andrea Barzagli, Leonardo Bonucci and Giorgio Chiellini, Juve's attacking width was provided by their wing-backs; of their three central midfielders, one remained withdrawn to defend, and the other two advanced through the inside channels and alongside their wing-backs to support their front two.

Carlos Tevez and either Álvaro Morata or Fernando Llorente initially formed the front two in which Morata or Llorente provided the focal point for potential direct passes from those in the defensive third, Pirlo, their influential defensive midfielder, included. Paulo Dybala and Mario Mandzukic arrived for Allegri's second season in Turin, replacing Tevez and Llorente, and their central midfield options also became more dynamic – Paul Pogba, Claudio Marchisio and Sami Khedira made an increased number of forward runs, complementing Dybala's willingness to withdraw into deeper territory (below). An increased number of rotations therefore existed between their attacking central midfielders and front two, and their central midfielders and wing-backs.

A further change involved Allegri reorganising his team into a 4-2-3-1 (below) built on the double pivot of Khedira and Miralem Pjanic, and led by Gonzalo Higuaín, following his arrival from Napoli, ensuring Dybala instead featured as their number 10 and Mandzukic towards the left, from where he attacked crosses from the right. When the Croatian drifted into the penalty area, he also drew defenders away from Dybala and Higuaín, who, similarly, rotated with Dybala to give his compatriot increased freedom.

That Mandzukic was instructed to so often attack infield meant that Alex Sandro was responsible for providing their width from left-back, and that their double pivot was responsible for providing defensive cover through the inside channel and therefore made fewer forward runs. Towards the right, Juan Cuadrado was a naturally wider option in the attacking half, and therefore their right-back had less freedom to overlap.

Allegri's willingness to adapt to the players at his disposal meant him also increasingly using a 4-4-2 or 4-3-3 – sometimes, mid-match – across the final two seasons of that first spell as Juve's manager, as was demanded by their opponents' shape. Douglas Costa complemented Cuadrado as a further natural wide forward with pace; if Mandzukic started towards the left, he did so in the absence of a number 10 and offered increased support in the centre of the pitch; Higuaín and Dybala often formed a front two; if favouring a midfield three, Pjanic operated as their single pivot and was supported by two of Khedira, Blaise Matuidi, or Rodrigo Bentancur.

Cristiano Ronaldo's arrival, and Bonucci's return from AC Milan and with it his distribution, meant Ronaldo replacing Mandzukic and a reduced emphasis on Pjanic to build play from the defensive half. Ronaldo was instead given a more central role that involved him joining attacks at a later stage from the left, and Dybala often operated from towards the right – until Ronaldo was given a permanent central role role (below) in front of advancing full-backs and central midfielders whose role was to provide cover from behind the ball. When he did so, Dybala operated from behind him as he once had Higuaín; a further option involved the use of an additional central midfielder to increase their support and cover from behind their advancing full-backs, and that midfielder adopting a wide midfield role when they were without the ball. Matuidi was particularly effective at doing so.

Defending and pressing
Allegri has long favoured an organised defence and a disciplined, somewhat reserved, defensive block, but there remain occasions when he oversees a high press. When Juve's back three was being implemented, their wing-backs withdrew into defence to form a back five (below) that was protected by three central midfielders prioritising the spaces in front of their three central defenders. Their front two worked to cover the central spaces and to force possession wide; one also operated from a slightly withdrawn position to offer cover against their opposing defensive midfielder, a tactic that proved particularly influential against opponents largely reliant on that midfielder to dictate play.

When they succeeded in forcing the ball wide, the numbers that formed their defensive block proved effective at defending against attempted crosses or wider combinations. Barzagli, Bonucci and Chiellini represented the world's finest selection of central defenders, so when they were required to defend from deeper territory and against an increased number of attacking runs from more central areas, they largely remained resilient.

The presence of a back five also meant that the most central defender – most regularly Bonucci – could react aggressively when opponents advanced beyond Juve's midfield, potentially to press, in the knowledge that a back four would remain in place behind him and ready to defend against further forwards runs and at the second phase of passes or shots.

By Bonucci or another advancing, there were also times attacks were delayed long enough for their three midfielders to press from behind or to the side of the ball, and potentially to force it wide, to where their wing-backs were proven at defending one-on-one.

When their shape evolved to instead feature a back four, if not a 4-2-3-1, their most common defensive shape was a 4-4-2 that was favoured when they were defending for lengthier periods, and not when applying a high press. Mandzukic and Cuadrado withdrew into midfield to provide cover from alongside Pjanic and Khedira and in front of the full-backs who had retreated into defence.

Further forwards, Dybala and Higuaín applied more aggressive pressure, if not to recover the ball when they were underloaded, then to discourage quick, incisive attacks through the centre of the pitch. Once their two lines of four had been established, Dybala and Higuaín operated as had the front two in the previous 5-3-2. Dybala's effectiveness as a 10 also meant that there were times when they defended with a 4-4-1-1 (above) from which he contributed cover against opposing midfield threes.

It was while in that 4-4-1-1 that Juve's two central midfielders withdrew into deeper positions than those adopted in their 4-4-2, and pressed with reduced aggression, ultimately prioritising defending the spaces between the lines because of the reduced number of defenders behind them. When their defensive block was established, Juve were content to frustrate opponents and to defend for lengthy periods of organised defending.

The far-side full-back so often being left free encouraged opponents to switch play to him, but the distance the ball would have to travel to reach him meant Juve's midfielders often having the time to shuffle to the opposite of the pitch and toapply the same press, again limiting the opposition's options.