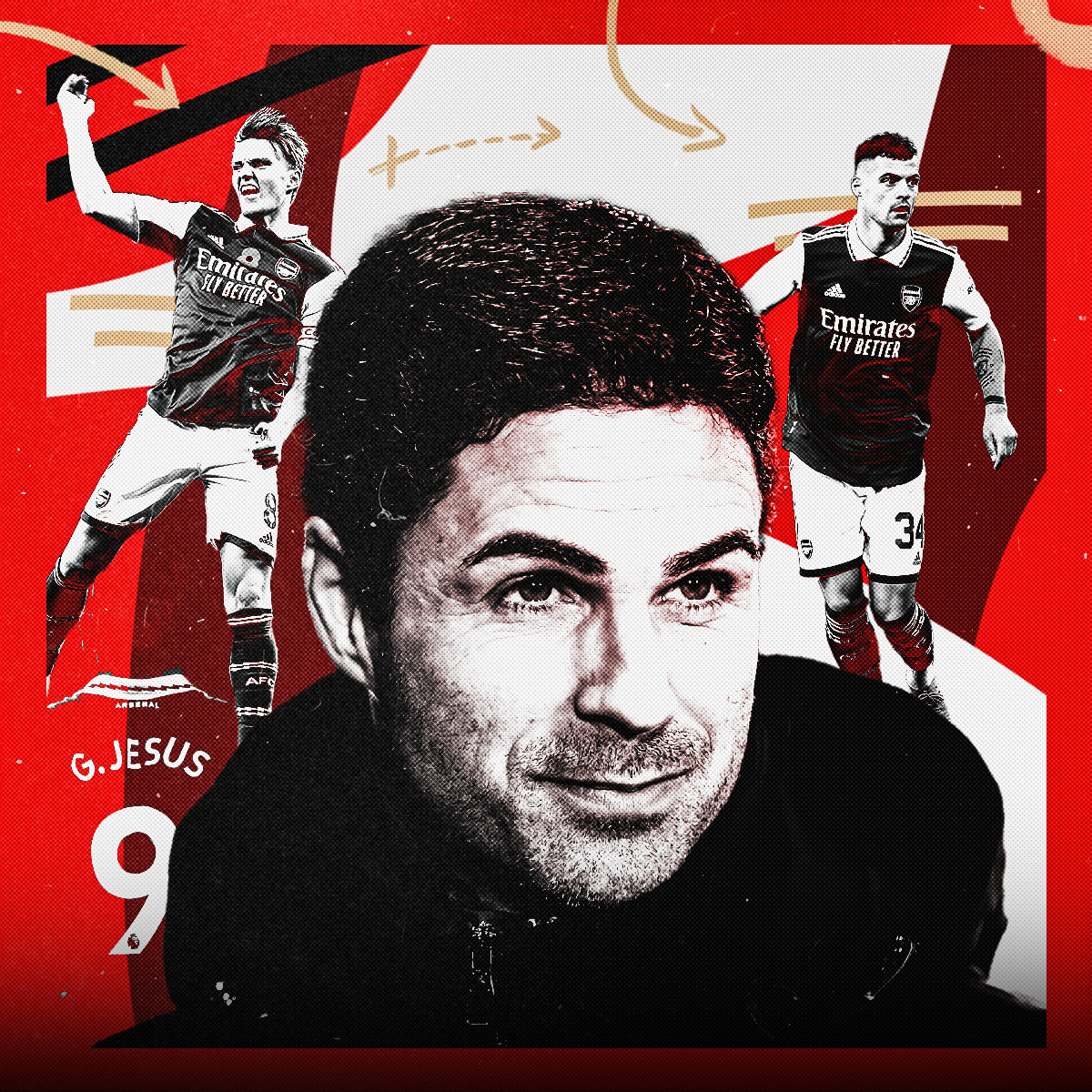 Who, honestly, can say they saw this coming? As we head towards the halfway mark of the 2022/23 season, Arsenal are five points clear of Manchester City at the top of the Premier League table. Before the campaign began, Arsenal were 40/1 outsiders for the title. Mikel Arteta has overseen an almost unthinkable improvement, however, creating a genuinely top-class team that deserves its place at the top of the league.

There is still a long way to go in the season, and Arsenal may well fall away – City remain the bookies' favourites for the title despite the points deficit they need to overturn – but there is every reason for Arteta to be immensely proud of the team he has put together and the lead they have built up. Even if they finish second, third or even fourth, this season will amount to more than many would have expected back in August.

But what exactly are they doing so well? What are the small tweaks that Arteta has made that have resulted in such a stark improvement? Here, we take a look at the tactics behind Arsenal's season, with a focus on five key aspects of their play.

Arteta added Oleksandr Zinchenko to his roster of full-backs in the summer, joining Takehiro Tomiyasu, Kieran Tierney and the converted Ben White as his options. Just like he did for City, Zinchenko inverts from full-back, moving alongside the single pivot in Arteta’s 4-3-3 – usually Thomas Partey – to create a double pivot during sustained periods of possession. When Arsenal set up in a 4-2-3-1, Granit Xhaka moves forward from the double pivot to join Martin Ødegaard as an advanced number eight in the inside channels. Zinchenko’s arrival has made Arsenal far more flexible, with more rotations possible. This makes them more unpredictable in possession.

Zinchenko’s presence has also made Arsenal more dominant in the centre of the pitch, as he is comfortable on the ball under pressure and technically very adept. His body shape when he receives means he can play forward swiftly after the ball comes his way. This has been especially useful as he provides a link to left winger Gabriel Martinelli, or to Xhaka after he has moved into a position between the lines. Zinchenko’s position also helps numerically overload a central-midfield three (below), as long as the opposition’s winger does not track him inside.

On Arsenal’s right, meanwhile, White or Tomiyasu often take up more reserved positions. This usually leaves them with a temporary back three, though the right-back and left-sided centre-back Gabriel are free to advance on the outside of the double pivot. When right winger Bukayo Saka moves inwards, the right-back can overlap, with a box of four players – Zinchenko and Partey, plus centre-backs Gabriel and William Saliba – acting as the security underneath the ball.

Xhaka has become even more important to Arsenal this season, featuring prominently in the team's attacks as an advanced number eight. Whereas in previous seasons he tended to stay goal-side of the ball, he now regularly makes runs ahead of the ball on the inside of the opposition’s right-back. With Martinelli providing the width on Arsenal’s left, Xhaka makes penetrative runs into the space inside the winger. From these positions, he can either feed Martinelli once he makes a run to receive a return ball, or look for an infield pass to maintain the rhythm and speed of the team’s move high up the pitch. This is clearly something Arteta took from Manchester City’s 4-3-3, and specifically the role David Silva played for Pep Guardiola when Arteta was his assistant.

Xhaka’s passing range has been useful in these advanced areas, as he has the ability to play short or switch play to Ødegaard, who mirrors Xhaka’s position on the right. These switches have helped Ødegaard get into goal-scoring positions more often, or in space to slide Saka in behind on the Arsenal right. Xhaka can spot and play these passes at pace; this aspect of his game has improved further under Arteta.

He has also enjoyed some success with outswinging crosses from his narrowed position on the left (above). These whipped deliveries are made with minimal backlift, with his technique a real asset in these advanced positions. Previously, he would only rarely get into areas of the pitch where he might cross the ball.

Without the ball, Xhaka often drops deeper than Ødegaard to form a double pivot as Arsenal defend in a 4-2-3-1 shape. He will cover the space inside the left-back, while picking his moments to jump out and press the ball-carrier. This helps Arsenal shift between a 4-3-3 and a 4-4-2 when out of possession.

With Xhaka pushing forward through the left inside channel, Ødegaard has become a right-sided number eight rather than a central number 10. Being left-footed but playing on the right side of Arteta’s 4-3-3 shape has allowed Ødegaard to step inside on to balls coming from the left.

Ødegaard then continues his movement inside to work a position to shoot. He is currently Arsenal’s joint-top scorer, with seven goals in the league – as many as he managed in the whole of 2021/22. He has also benefited from the constant, agile movements made by the centre-forward – now Gabriel Jesus or Eddie Nketiah. They often move out to Arsenal’s left to join in with combinations between Xhaka and Martinelli, and provide much more varied movements than either Pierre-Emerick Aubameyang or Alexandre Lacazette, who led the line last season. Ødegaard then has more space in the centre to move into, with opposition centre-backs dragged slightly out of position.

Ødegaard’s ability in tight areas has also been key for Arsenal, especially with more teams choosing to play with a lower block against Arteta’s in-form side. Ødegaard’s combinations and ability to break the last line have led to more chances for Saka after he comes in off the right. What’s more, after stepping infield on to his left to receive a pass, he also has the ability to find runs through the left inside channel made by Xhaka or Martinelli (above). He has exceptional technique and vision, and can loft the ball over or slide a pass through an opposition block to find these runs. He has been absolutely integral to Arsenal’s impressive run.

Jesus was brought in by Arteta to provide a greater goal threat up front and a link to midfield runners, but more so as an improved counter-pressing centre-forward. In 2021/22, Arsenal ranked 13th for PPDA (passes per defensive action), indicating they were in lower mid-table for the intensity of their press. In 2022/23 so far, they are first in this metric. This has naturally made Arsenal more defensively solid, but they are also scoring goals after high turnovers from a press led by the energetic Jesus.

Jesus presses back towards his own goal particularly well. He recovers with aggression and intensity, and has the ability to step across his opponent and get his body between player and ball. Not only does this delay the attack to allow his teammates to recover, but it also often forces his opponent into a crowded area where a midfielder can regain possession before play has progressed past the halfway line (above).

When pressing higher up the pitch, Jesus is adept at positioning himself and curving his run to cut off any switch between the centre-backs, before picking the right moment to move out and press the centre-back in possession. He then works hard to push them towards the touchline, while also screening passes into the closest pivot player. This then allows one of Arsenal’s central midfielders to move into a half-and-half position between two opponents, which has been crucial to stopping opponents playing out successfully.

Improvement at the back

Arsenal have dominated possession in most of their Premier League matches so far this season, and controlled games as a result. They dominate territory and press high, locking the opposition in their half for long periods and conceding fewer chances than before. Even when the opposition manages to launch an attack, the centre-back pairing of Gabriel and Saliba has provided an incredibly strong foundation at the back.

Gabriel’s aerial ability has enhanced Arsenal’s defence, and they look more secure when facing crosses this season, both in open play and at set-pieces. Even if he doesn’t win the first contact cleanly, his ability to disrupt and block his opponent has significantly reduced the volume of chances they concede.

Saliba, meanwhile, provides cover around Gabriel after he competes for the first ball. The Frenchman's reading of the game, as well as his ability to spin and cover in behind, has allowed Arsenal to defend with a high line, while goalkeeper Aaron Ramsdale sweeps up behind them. Saliba has also impressed with his individual duelling on the floor, where he is very rarely beaten. He covers ground quickly and moves into the wide areas when needed, which has helped shore up Arsenal’s right side (above).

The use of White, naturally a centre-back, at right-back means Arsenal have a player perfectly comfortable covering on the inside of Saliba once he moves out to engage the ball-carrier. He is a versatile player who supports attacks well but also covers at centre-back often.

So many positive things coming together simultaneously has amounted to an unlikely Arsenal title challenge. Whether they go on to win the league against the odds or not, Arteta deserves huge credit for this incredible run to start the 2022/23 season.