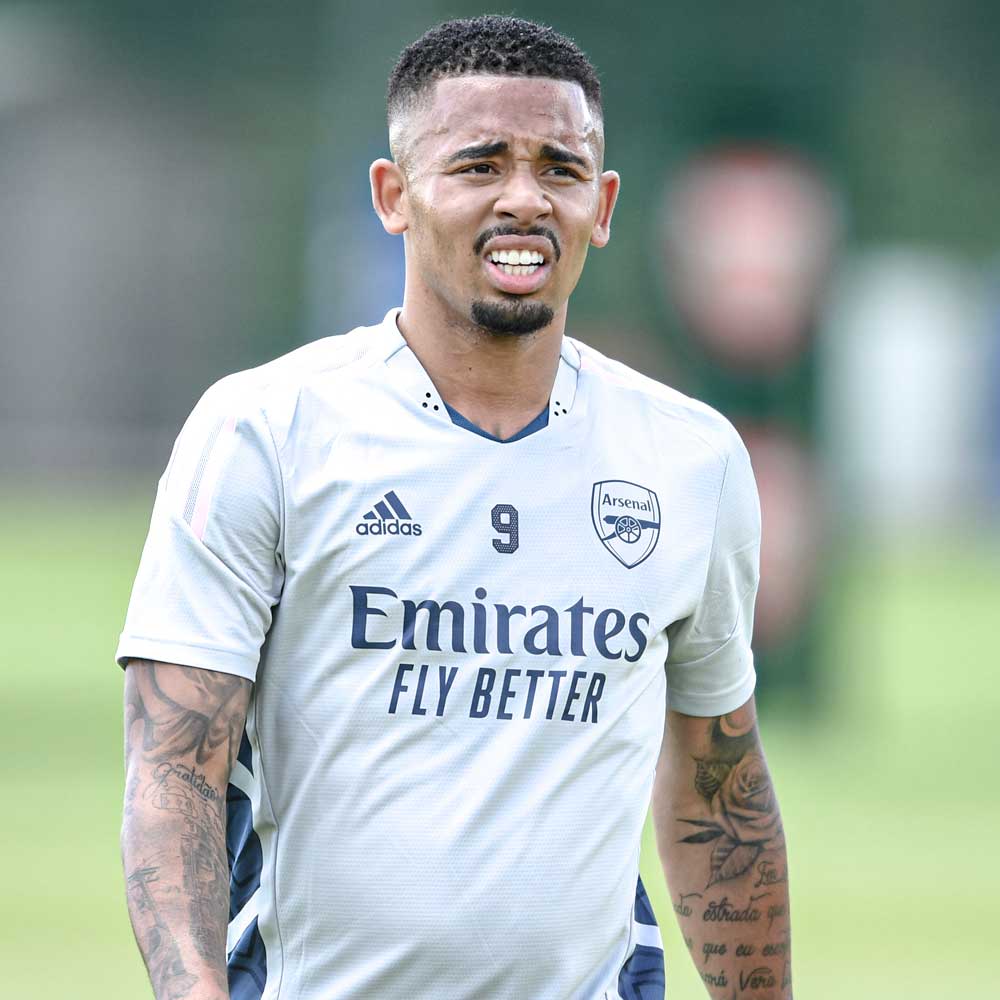 With Pierre-Emerick Aubameyang gone and Alexandre Lacazette heading for the exit door, Arsenal set out on their summer 2022 transfer business with a new striker as a priority. It didn't take long for manager Mikel Arteta to identify Gabriel Jesus as his number-one target.

Having coached Jesus as Pep Guardiola's assistant at Manchester City, Arteta knows the Brazilian well. As such, he clearly believes he has the attributes needed to lead the line for his new-look and improving Arsenal side. For Jesus, meanwhile, a move to Arsenal means far less chance of winning trophies than he had at City and no Champions League football. But it does guarantee him regular first-team football – something that proved hard to come by at City.

Arteta could not hide his delight at the confirmation of the transfer. “I’m very excited, the club has done a tremendous job to recruit a player of this stature," he said. "I know Gabriel personally very well, and we all know him well from his time in the Premier League and being really successful here. This is a position that’s been on our radar for a long time now. We have managed to get a player that we all wanted, so I’m really happy.”

Gabriel Jesus is a right-footed attacker who has experience playing across the front line, although he has spent most of his career playing as a centre-forward. Close to goal, he is at his best playing off instinct. If he takes more than three touches, he becomes far less effective; his decision-making is poorer when he has time to think about what he is doing. His end product in front of goal also drops in quality after a couple of touches.

His lightning-quick reactions, and ability to twist and manipulate his body to face goal when reacting to loose balls or passes into the area, make him a huge threat (below). He scores plenty of goals when other forwards may not even be able to manage a shot on target. He is particularly effective when finishing first-time inside the area, and often disguises his finishes to beat the goalkeeper. His finishing isn’t particularly strong, though, as evidenced by his goalscoring numbers not comparing too favourably with his xG. There is far more to his game than finishing, though.

He does not provide much threat in the air, but he remains a danger at set-pieces through his movement and ability to attack the second phase. He will generally start in an offside position before moving back to try and win a knock-down or loose ball between the penalty spot and six-yard box.

Jesus likes to threaten the space in behind an opposition back line, and is caught offside frequently when attacking central spaces in open play. He could do with improving the timing of his runs across the centre-backs before breaking in behind as the ball is released. However, when used in a wider role – as he was for a significant portion of 2021/22 at City, and for Brazil – he is far more effective. From wide on the right, he targets the gap between the left-back and left centre-back. As he is facing the pitch when making these runs, it is easier for him to see when the ball is being released, so he is caught offside less often.

Jesus is smart with his movement in the final third, at his most effective when operating on the blindside of his direct opponent and staying out of the line of sight of the centre-backs (above). Although he can compete for aerial balls, he is best when he gets away from the central defenders and can make a quick, darting run past an opponent to attack the ball. He also uses runs from teammates to attack the space their runs create, reacting to their movements to get into gaps and attempt first-time finishes when the ball has been played into them.

Jesus is also happy to drop back to receive to feet and connect with the midfield, doing so most effectively when playing off a maximum of two or three touches. His effective link-up play allows teammates to run beyond him, especially through the inside channels where wingers move inside, number eights run forward or, as at Manchester City, the full-backs move inside. He is comfortable making quick passing combinations in these situations, and effective in congested spaces as a result.

He also has the ability, vision and awareness to make deft passes around the corner, which he uses to exploit the space behind a centre-back who has followed him out. That said, he is also happy to keep it simple, setting the ball back to a midfielder to change the point of attack and ensure a forward-facing teammate is on the ball (below). He is constantly on the move; by drifting wider and combining in the inside channels, he does a good job of pulling defenders out of their preferred position.

Out of possession, Jesus works extremely hard and is very effective when pressing. He bends his runs towards the ball to force play in a specific direction, is able to decelerate quickly after sprinting towards the ball, and is sure to approach his opponent with the aim of blocking passing lanes. When out wide, he forces the ball towards the touchline, pressing from in to out. In central areas, meanwhile, he adapts to the position of the ball and his opponents, and is agile, smart and aware enough to press play towards an opponent.

When it comes to individual duels for the ball, Jesus will generally use his right leg to pinch or poke the ball away from his opponent. He will do this rather than make an attempt to tackle, before sprinting to try and win the loose ball. His ability to change direction quickly is of use in these situations, as he reacts well to any opponent's attempts to beat him.

Jesus has spent the majority of his career as a centre-forward. He spent much of his five seasons at Manchester City up front in Pep Guardiola’s preferred 4-3-3 shape, in which the two wingers stay very wide.

Regular runs in behind are a key part of City’s attacks, as the two wingers look to get on the inside of their full-back opponent and run across the back line to end up in central positions. Jesus aided this by dropping into the inside channels, away from a traditional centre-forward position (below). This helped create space in behind and also led to him linking with the two number eights, who took up high positions while the full-backs moved inside.

He also provided central runs in behind himself, using the fact that the wingers stayed so wide to exploit gaps in the opposition defence. Here, he co-ordinates his movements so that both players are in as much space as possible, while looking to get into a position to attack crosses into the middle. City are known for their ability to create high-quality chances with low balls across the face of goal. Jesus became highly skilled at getting into the right position at the right time to finish those chances off.

Playing off the flank

Despite playing as a wide forward less often than he plays through the middle, Jesus has stated a preference for playing off the flank. He has played on both wings, but he spent much of 2021/22 on the right side of City’s attack. Having isolated the left-back, his ability to shift the ball out of his feet and deliver low, driven balls across goal led to plenty of chances (below).

Jesus used the overlapping runs of the right-back – usually Kyle Walker or João Cancelo – and changes of pace to beat his man with runs through the inside channel. He also proved useful against low blocks, where he was happy to cut back inside on to his left foot before combining with a midfield teammate and looking to run beyond the defence.

This not only gave his teammate another forward passing option, but also took at least one defender away from the ball. Even when the ball was on the left, Jesus was constantly aiming to lose his marker and threaten the space beyond the opposition’s defence. He would attack the far post, which had the added benefit of pushing the defence further back and closer to their own goal, creating space in front of the defence for a midfield teammate. He also showed an understanding of when it was more beneficial to move into a central area and provide a second option between the posts. When the ball did come his way, his first-time finishing proved useful.

Jesus is versatile, skilled, intelligent, hard-working and – above all – a threat in front of goal. There is no doubt that Arsenal have got themselves a brilliant striker. With a manager who knows him well in Arteta, he could well be set for a successful time in north London.