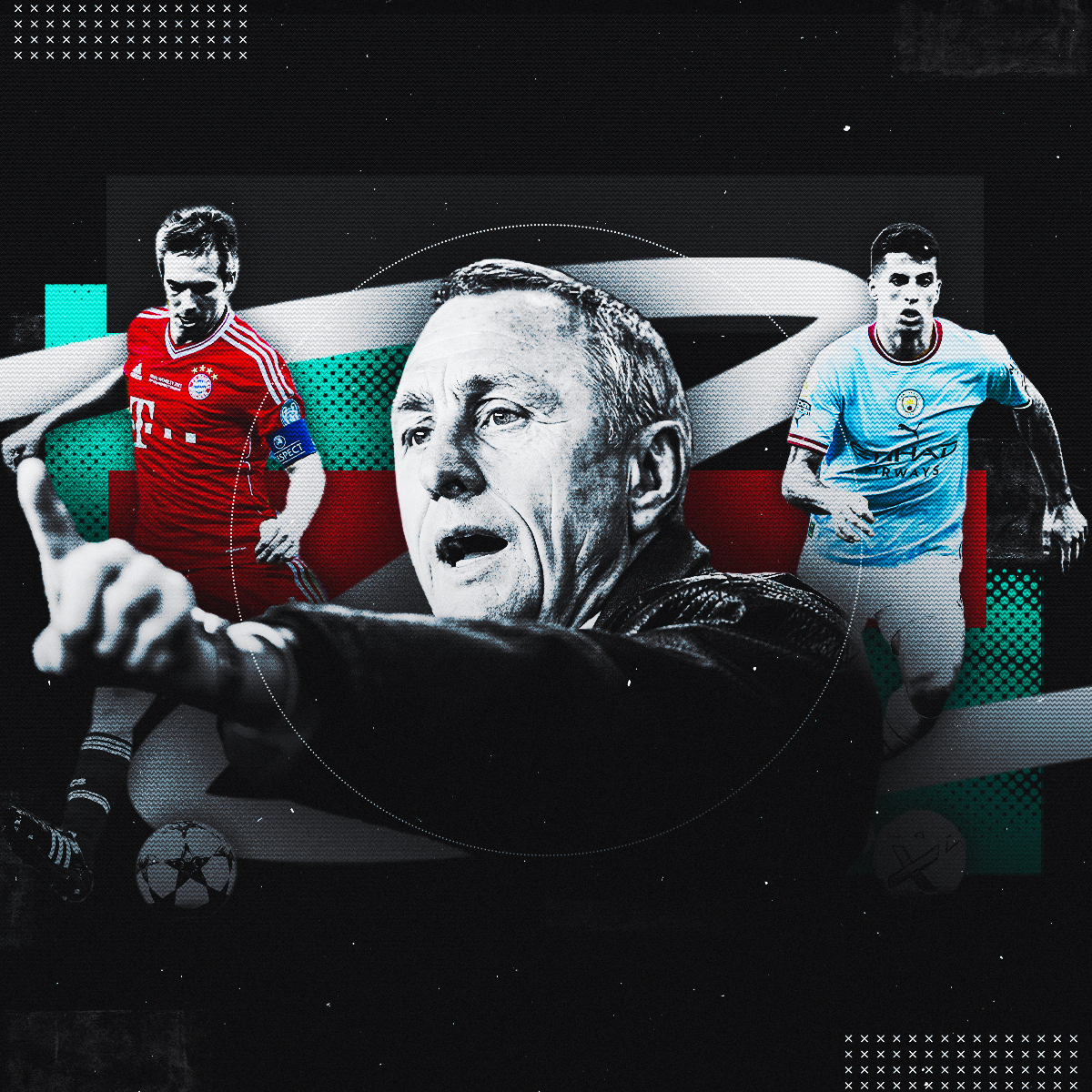 What is an inverted full-back?

Traditionally, full-backs are the widest players in a back four, and as a result they attack and defend mostly in the wide areas. However, full-backs who move inside into central spaces when their team has the ball are known as ‘inverted full-backs’. This movement adds an extra presence in the centre of the pitch (below).

On defensive transition, they may then remain central for a short period. But they will eventually recover into the back line and defend outside the two centre-backs, as full-backs usually do. Wing-backs who operate in a back five can also move inside in a similar fashion during build-up play.

Where does the name ‘inverted full-back’ originate?

Full-backs were originally the deepest players in the 2-3-5 formation. As the back four grew in popularity, however, they moved out to the sides of the defence. As the game developed, the full-backs began to push higher up the pitch to join attacks. They remained in the wide areas, however, usually overlapping the winger or wide midfielder on their side of the pitch.

In more recent years, some coaches have moved their full-backs inside during build-up. This has added extra players in the second line, slightly ahead of the centre-backs.

Although Pep Guardiola is the coach most associated with the inverted full-back, Johan Cruyff used them with Barcelona many years before. Then, he often converted the 4-3-3 into a 3-4-3 diamond, with one full-back inverting into central midfield. The single pivot in that particular diamond midfield was Guardiola himself.

What are the in-possession responsibilities of an inverted full-back?

The inverted full-back adds another body in central midfield, usually in an attempt to overload the opposition in this part of the pitch. Naturally, they are then involved in lots of short passing. They must have the vision and technical ability to play in crowded central areas.

Inverted full-backs have to create forward passing angles for the players in the back line, then receive the ball and progress play forwards. They should have positional awareness, and the ability to make forward passes or dribbles to break lines. They must also be able to switch play to the opposite side of the pitch. This is especially useful when only one full-back has inverted, while the other has pushed forward in a wide position on the other side of the pitch (below).

What are the out-of-possession responsibilities of an inverted full-back?

Without the ball, the inverted full-back will only remain in the centre of the pitch for a brief period. They will then return to their traditional defensive position in the back line. However, while still in the central spaces, they are responsible for breaking up and slowing down any opposition counter-attack.

As inverted full-backs are only used by teams that focus on dominating possession, the main method of attack for the opposition is counter-attacking from deep. Therefore, with the full-back central when in possession, they provide added presence in the central spaces immediately after the ball is lost. They can therefore contribute to central counter-pressing, while also duelling, tackling and making interceptions to break up any forward play from the opposition on transition. The inverted full-back may also be used to screen direct passes into the opposition’s centre-forward following a turnover.

Who are the best inverted full-backs?

At Bayern Munich, Guardiola used Lahm as an inverted right-back. Although left-back David Alaba would also move inside when the single pivot dropped into the back line between the centre-backs (below), it was Lahm who moved infield more often. His ability to receive under pressure and create passing angles, and his overall awareness and vision from a central position, made him hugely effective in this position.

Guardiola has again used inverted full-backs with Manchester City (below) – though slightly differently, with the right-footed Cancelo often playing on the left side of the back four. He provides exceptional vision and passing, meaning he can connect into the front line while also making forward runs, crossing from a narrow position and even taking shots from distance.

Having initially broken into Jürgen Klopp’s Liverpool side as an overlapping right-back, Alexander-Arnold has gradually moved infield (below). From this position, his world-class passing range, ability to hit the spaces behind the opposing back line, crossing and switches of play are all extremely useful. His experience in central midfield as a youth player has helped this transition infield, and he rotates effectively with Jordan Henderson and Mo Salah on the Liverpool right.

Which other players are examples of inverted full-backs?

What are the benefits of playing with inverted full-backs?

Inverted full-backs can provide a numerical overload in central midfield. They help their team to dominate possession, while also aiding deeper build-up play through the centre of the pitch. The extra central passing option helps a team work the ball away from pressure, as long as teammates are spaced out effectively.

With an additional player in central midfield, attacking midfielders – particularly number eights – can then push higher up the pitch. This means they receive passes closer to goal, get into the spaces between the lines more often, and even make more runs beyond the opposing back line.

When defending against counter-attacks, inverted full-backs can help screen, block and protect the central spaces, helping to force the ball wide and away from goal. Inverted full-backs also provide an extra player to counter-press in the centre of the pitch, helping the team maintain pressure on the opposition.

What are the disadvantages to playing with inverted full-backs?

The biggest disadvantage to using inverted full-backs is that it requires incredibly versatile players who can defend in wide areas, but then manage the ball and play like a central midfielder. It’s not very common for players to be so well versed in both of these particular roles.

On transition, the inverted full-back’s central position in the second line means one player fewer in the last line of defence. Should the opposition work the ball past the second line, the team has less defensive presence to protect the goal.

The inverted full-back can also occupy similar spaces to the pivot players in midfield, which can mean too many players doing the same jobs. The full-backs also need time to invert, so all other teammates must be able to manage the ball, potentially while under pressure, to allow the full-back time to move inside.