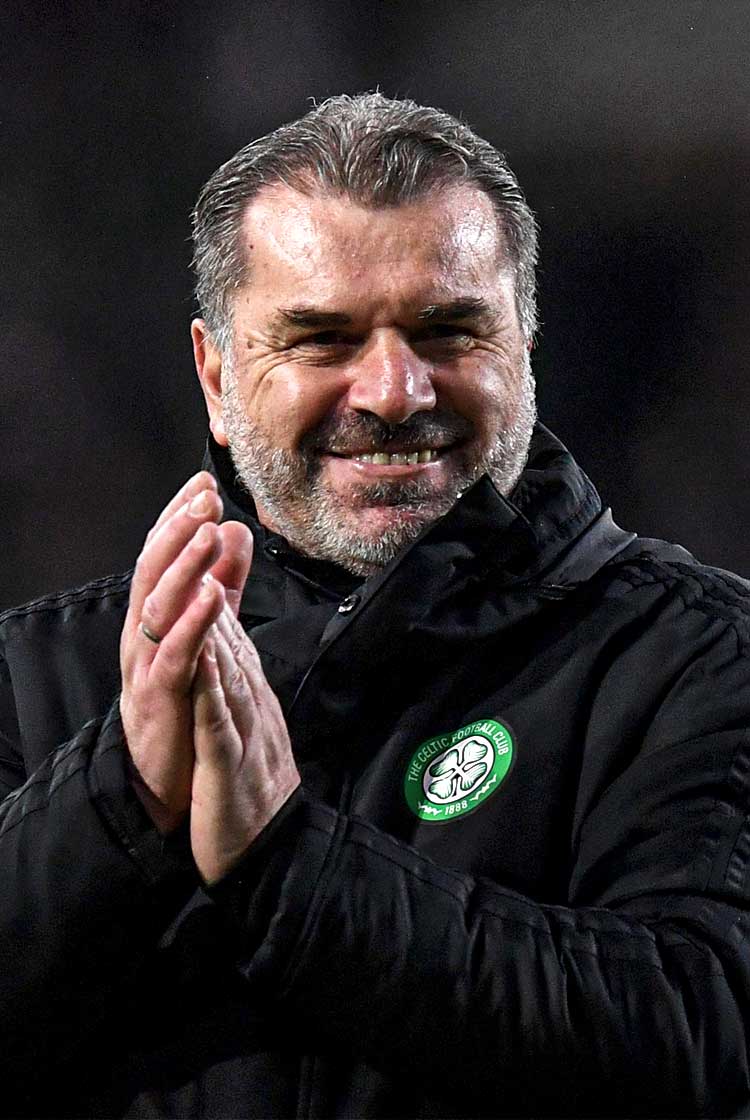 Profile
Celtic turned to the relatively unknown Ange Postecoglou when appointing Neil Lennon’s permanent successor. Steven Gerrard leading Rangers to the Scottish Premiership title in 2020/21 – and thus denying Celtic a 10th successive title – made this managerial appointment their most important since Martin O’Neill’s in 2000.

Postecoglou's previous experience of European football amounted to nine months with Greek club Panachaiki in 2008, but he has enjoyed success elsewhere. He won consecutive A-League Championships with Brisbane Roar in Australia, before taking the national team to the 2014 World Cup. Three group-stage defeats in a horrible pool featuring the Netherlands, Chile and the eliminated 2010 winners Spain didn't tell the full story of the team's performances, and Postecoglou duly led his team to victory at the 2015 AFC Asian Cup. He arrived in Glasgow on the back of another trophy-winning spell at Japanese club Yokohama F Marinos, who he managed to their first J League title in 15 years in 2019.

Celtic midfielder Tom Rogic played for Postecoglou in the Australia national team. He detects similarities between Postecoglou and Brendan Rodgers, who previously brought Celtic such success. "It's almost a bit of a similar feel as I see the managers being a little bit similar in ways," he said. "Both quite positive and both quite intense to work under."

Playing style
Postecoglou’s success in the A-League with Brisbane Roar and Melbourne Victory led to him being given the Australia job. He took the national team to the 2014 World Cup, playing an attacking 4-2-3-1. His wide forwards came off the flanks and looked to get on the ball between the lines, while Tim Cahill provided the focal point up front. Mile Jedinak played a key role at the base of their midfield, and he and his midfield partner held their positions to allow the full-backs to attack simultaneously. When the central midfielders got on the ball in deep positions, they either looked to play direct balls up to Cahill, or targeted the wide midfielders.

Postecoglou then led Australia to their first ever Asia Cup triumph in 2015 with a 4-3-3 (below). There was greater emphasis on retaining possession, and that led to more complex rotations. Their full-backs – Jason Davidson was particularly effective on the left – regularly advanced, and both number eights attacked at the same time to offer penetration on the inside of the wide forwards.

Postecoglou further demonstrated his versatility with a back three and an in-possession 3-4-2-1 that he used at the 2017 Confederations Cup and in qualification for Russia 2018. Two number 10s operated close to the striker, and the wing-backs provided the team’s width (below). In Aaron Mooy, Jackson Irvine, Rogic and Massimo Luongo, Australia had plenty of quality in midfield and Postecoglou chose a formation to suit their strengths.

Postecoglou’s next job took him to Yokohama F Marinos in Japan, who he led to their first league title in 15 years in 2019. There, he used an expansive 4-3-3 with wide forwards who remained wide, and an extremely fluid midfield three (below). The full-backs often made underlapping runs to add extra bodies in the central channel. Central midfielders either withdrew into defence to encourage a full-back to attack, or advanced into positions close to the striker to provide extra goal threat. Postecoglou selected wide forwards who could beat an opponent and could therefore occupy two defenders, which would then free up another player elsewhere.

At Celtic, Postecoglou has used a similar 4-3-3 shape to that which he used at Yokohama, again using very wide wingers in the front line. The aim is to create space in the inside channels for a full-back or central midfielder to exploit. It’s not uncommon to see the full-backs dribble diagonally into these spaces, while the wingers then threaten the space in behind. The central midfielders will sometimes pull right out wide to create even more space in the inside channels for the full-backs to attack into.

When play is being built out wide, the far-side number eight will push forwards, ready to support the centre-forward – usually Kyogo Furuhashi. David Turnbull is particularly attack-minded in midfield, and when used as a number eight, he will take every opportunity to push forward through the inside channel to provide added threat on goal (below). Fellow central midfielders Tom Rogic and Callum McGregor will tend to move into wide areas to support the winger and full-back, rather than join the striker like Turnbull does.

The narrow full-backs’ positions help Celtic dominate possession by overloading the centre of the pitch, while also providing the single pivot with support at defensive transitions. They will help to lock the ball in the opponent’s half and prevent counter-attacks when the number eights are beyond the ball. Celtic unsurprisingly dominate possession under Postecoglou, with their impressively fluid movements and short passing are too much for just about any opponent.

Defending and pressing
Postecoglou's Australia side was set up with a low or mid-block (below). Their striker would stop passes being made between the centre-backs instead of aggressively pressing, and the wide players helped force play towards the touchline. They picked their moments to press and when play was locked near the side of the pitch they made attempts to win the ball. The closest two midfielders then moved towards the ball and the third remained central in case the opposition attempt to switch play. Postecoglou prefers versatile and combative players in midfield who can do this job effectively.

When he later used three centre-backs (below), Australia defended with a back five, with a double pivot in front of them and a narrow front three that worked to cover central access and force play out wide. Opponents were forced to build around the 5-2-3 mid-block, so when they progressed beyond Australia's front three, the wing-back pushed forward to engage the ball, and the wide forward worked back.

A more attack-minded player was likelier to feature at right wing-back than at left wing-back – a natural full-back was preferred on the left – to give them greater threat on the counter. This right wing-back was more likely to press the ball aggressively than the left wing-back. The wider central defenders were free to move out to press the ball when the wing-backs were both in position – leaving a four-man defence behind them. If a wing-back has pushed up, the centre-backs would be less willing to push out.

Celtic have defended more on the front foot than many of Postecoglou’s previous teams, although Yokohama would counter-press at times. Celtic press aggressively, often high up the pitch after having lost the ball. They rank among the top teams in the Scottish Premiership for duels, tackles, and interceptions per minute spent out of possession. Their 4-3-3 structure is ready to collapse inwards, counter-press and suffocate the opposition. The high back line Celtic use helps them do this effectively.

The wingers will often join the centre forward in pressing high, bending their runs inwards to force the ball into the centre of the pitch. The two number eights are then free to jump forward and press high (above). The full-backs will also move forward to support the single pivot with the next line of the press.

Even when they don’t press quite so aggressively, Celtic’s wingers will still encourage play infield. The position of the far-side winger frees up Furuhashi to press even higher, sometimes even pressing the opposing goalkeeper. Alternatively, he will screen passes between the two centre-backs and aim to force the opposition to go long.

Postecoglou’s lack of experience had led to doubts about whether he would be able to cut it at Celtic, but he quickly proved more than capable. With Rangers back at the right end of the league, the Old Firm rivalry is back to its best, and Postecoglou has played a key role in that.