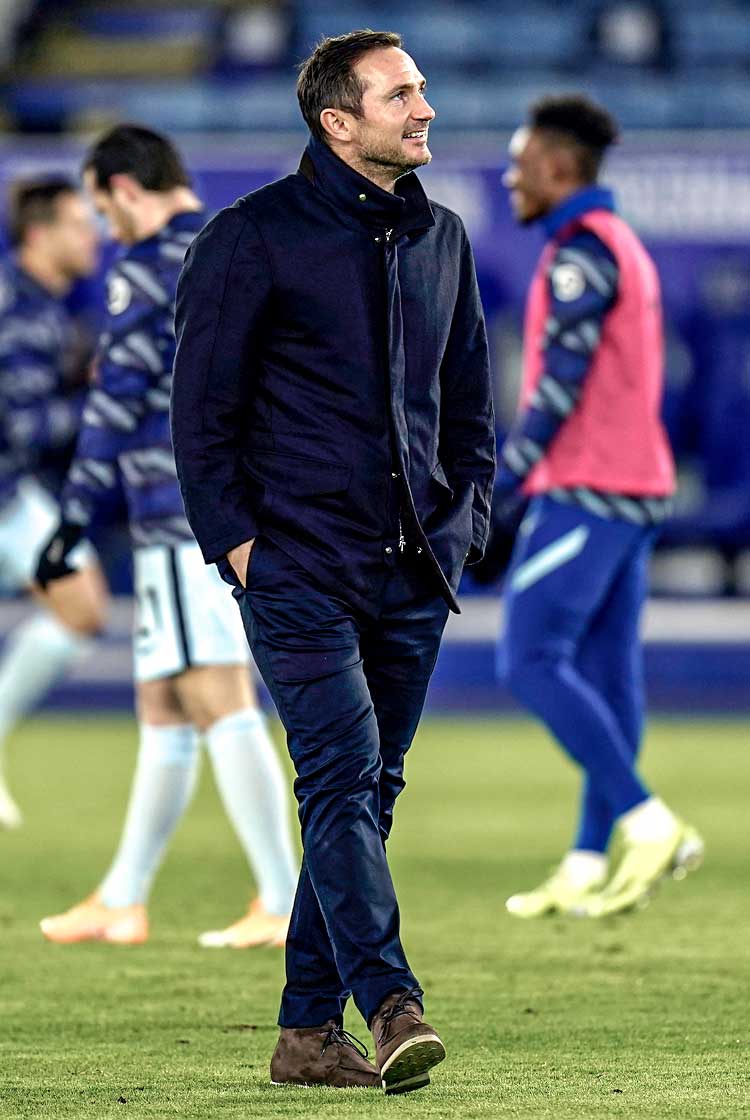 Profile
Frank Lampard made an early step up to Premier League management when he returned to Chelsea in 2019 following a couple of years cutting his teeth at Derby. Although he was unceremoniously dismissed by the Stamford Bridge hierarchy after just 18 months in charge, there were enough positives over the course of his tenure – as well as plenty more at Derby – to give reason to believe he has a bright future in coaching.

The greatest achievement of his time at Chelsea was surely securing a top-four finish despite being unable to spend any money before the start of the season, as a result of Chelsea's transfer ban. The success Thomas Tuchel has since enjoyed with a similar squad has been used as a stick to beat Lampard, but such is the former Chelsea midfielder's reputation in the game that he is attracting plenty of interest from elsewhere.

Playing style
Both at Derby and Chelsea, Lampard promoted a possession-based approach that involved attacking with plenty of width. In 2019/20, Chelsea focused much of their attacking play down the left (below), with a more attack-minded player at left-back than César Azpilicueta was at right-back. In 2020/21, though, Lampard’s 4-2-3-1 and 4-3-3 evolved as he tried to accommodate new signings, and his team became more balanced in attack as a result.

On the right, the left-footed Hakim Ziyech moved infield at an early stage of their attacks to attempt through balls or penetrative passes. He drew the opposition’s left-back out of position and created space for the emerging Reece James to overlap into from right-back.

When Ziyech stayed wide, Ben Chilwell or Timo Werner made runs infield from the left and the other stayed wide, and Chelsea regularly managed to penetrate through or around their opposition’s defence. As was the case for Lampard’s Derby, there was an emphasis on penetrative runs from Chelsea's attacking midfielders, and players such as Mason Mount thrived under Lampard. However, those runs sometimes crowded the space that Werner could attack into and there were times when he struggled to have much impact. Nonetheless, by the point of Lampard's departure, Chelsea had greater balance in attack, creating 12 goals from the right and 12 from the left in 2020/21.

There is an argument that the system Lampard used did not get the most from two of his biggest signings in the summer of 2020. With Chelsea organised to attack with one central striker, two wide forwards and overlapping full-backs (below) – a system that focused on providing crosses instead of rotations in the centre of the pitch – Werner and Kai Havertz had limited influence when in a different system they might have complemented one another. In Germany, Werner had plenty of joy when playing alongside another attacker with whom he could dovetail, either acting as a foil by moving wide and creating space centrally or by using their movement to find space for himself. Havertz, meanwhile, is at his best with freedom to roam the attacking third and run beyond the attacker, as he has since shown under Tuchel.

Lampard has used other formations, though. The 4-4-2 he used in the 3-1 victory at Brighton to start Chelsea’s 2020/21 campaign had the flexibility to become a 4-2-2-2. Their full-backs overlapped, a double pivot provided cover at the base of midfield, and their attacking players largely stayed central. Each of the elements of that team have been prominent throughout Lampard’s coaching career, both at Derby and Chelsea.

Lampard likes his full-backs to overlap, his wide forwards to come inside and a double pivot to act as protection his defence. Even when he experimented with a back three at Chelsea – with mixed success – these were consistent themes.

Defending and pressing
Lampard liked his possession-based football to be accompanied by an intense press. In the Premier League in 2019/20 – Lampard’s only full season as Chelsea manager – only Liverpool and Manchester City made more regains in the attacking half than Chelsea. In Lampard’s final season at Derby – 2018/19 – his team ranked sixth in the Championship's for regains in the attacking half.

At Chelsea, the press involved significant responsibility for the central midfielders. With the full-backs encouraged to advance, the double pivot were required to stop attacks early and cover the space that the full-backs vacated when they attacked. When the ball was lost in the attacking half, central midfielders such as Jorginho, N'Golo Kanté or Mateo Kovacic were instructed to press aggressively in the inside channels. Their aim was to force play back towards their opponents’ goal or break play up and stop any counter-attack from gathering pace. When Lampard played with a back three, a four-man box in midfield was used to protect the inside channels and deny access to opponents in central positions (above).

Chelsea's central midfielders were also crucial to the press when their opponents had comfortable periods of possession. Both his Derby and Chelsea teams pressed opponents in deep midfield positions and in defence. Their wide forwards either directly pressed their opposing full-back or adopted a narrower position and covered the inside channels. When possible, the wide players pressed with the aim of forcing play infield, towards Chelsea’s central midfielders who were all good ball winners. This was also the case at Derby, where three of the four players who recorded the most regains in 2018/19 were central midfielders Tom Huddlestone, Bradley Johnson, and the on-loan Mount.

In 2020/21, it became more common for Chelsea's defenders to make regains as opponents found more ways to play through Chelsea’s press and Lampard’s team was forced to retreat. They were far less effective both with and without the ball in what was Lampard’s final season, and it will be interesting to see how his next team lines up.