Profile
Mateo Kovacic has played a key role at Chelsea under two different managers in Maurizio Sarri and Frank Lampard since his £40m move in 2018 from Real Madrid. A box-to-box midfielder who covers an awful lot of ground, willingly contributes in defence and is extremely comfortable on the ball, it is no surprise that his coaches like him. Despite significant investment at Chelsea, he remains an important member of both the team and squad.

“Kovacic, his work ethic is great,” Lampard said. “But what he has that some other midfielders don’t have is that he can travel through midfield with the ball at pace and open up a game out of nowhere. He has that special attribute and he can be huge for us.”

Tactical analysis
Kovacic is a central midfielder who operates best as part of a three, though he has also shown he is capable of playing in a double pivot. Despite being right-footed, he is most effective when operating from the left of a three, supported by a single pivot and with the freedom to break forwards. His passing and movement in the inside left channel help him to break lines and create chances for his teammates, and he combines best with a lone striker and wide left attacking midfielder.

He also possesses a superb work ethic, and he is both reliable and effective at defensive transitions, when he is switched on and alert to losses of possession. He makes quick recovery runs so his team regains its out-of-possession shape as swiftly as possible after losing the ball, and he is similarly capable of bold, last-ditch tackles that can rescue his team when an opponent manages to get the wrong side of midfield.

When in possession Kovacic is a tidy player who is comfortable keeping the ball in tight areas. Disguised flicks away from danger are a trademark, but he can also dribble his way out of pressure, which can be particularly useful when he is pressed in the defensive third. His athleticism – and by extension his acceleration over short distances – coupled with good close control helps him to find his way out of difficult situations.

Perhaps Kovacic’s greatest strength, however, is that he looks to play vertically as much as possible. When there is an opportunity to play forwards, he takes it, either through a fast, accurate pass to break the opposition’s midfield line (below) or via a dribble and a burst of pace. His dribbling ability means opponents often sit off him, remain reluctant to get too close, and risk him skipping past them and leaving another teammate exposed. 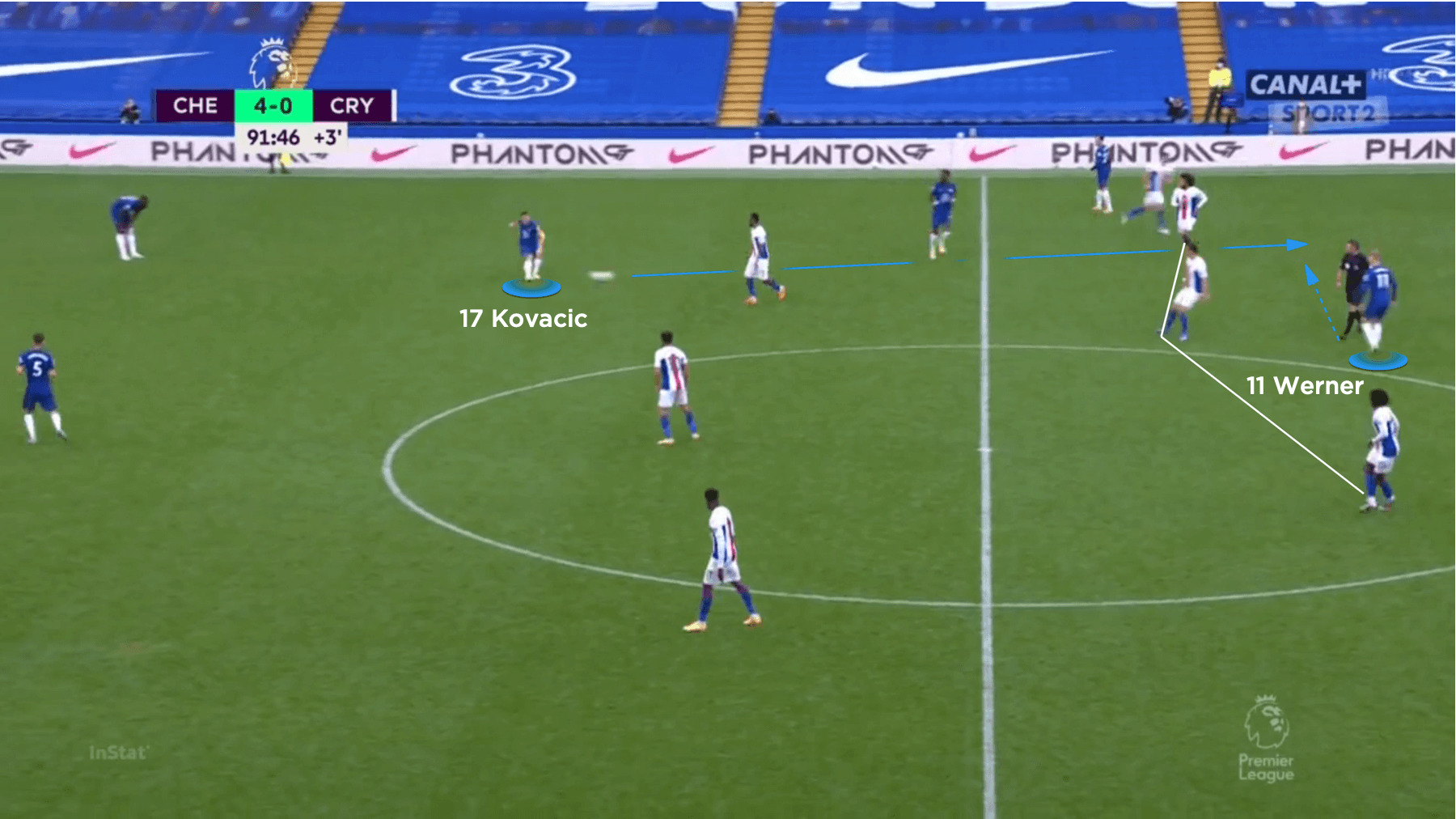 When Kovacic moves into deeper positions to collect possession and isn’t followed through an opponent’s fear of being beaten, he is free to attempt a clipped ball over the opposition or into wide positions (below). He is also adept at retaining and recycling possession, and most comfortable receiving the ball in front of the opposing midfield, but from those positions doesn’t always settle for the easiest pass, and will often look to find an attacker.

There are regardless weaknesses to Kovacic’s game. He is not as strong in the air as someone with his build possibly should be, and he is sometimes prone to retaining the ball for too long in midfield, which can lead to turnovers in potentially dangerous positions. 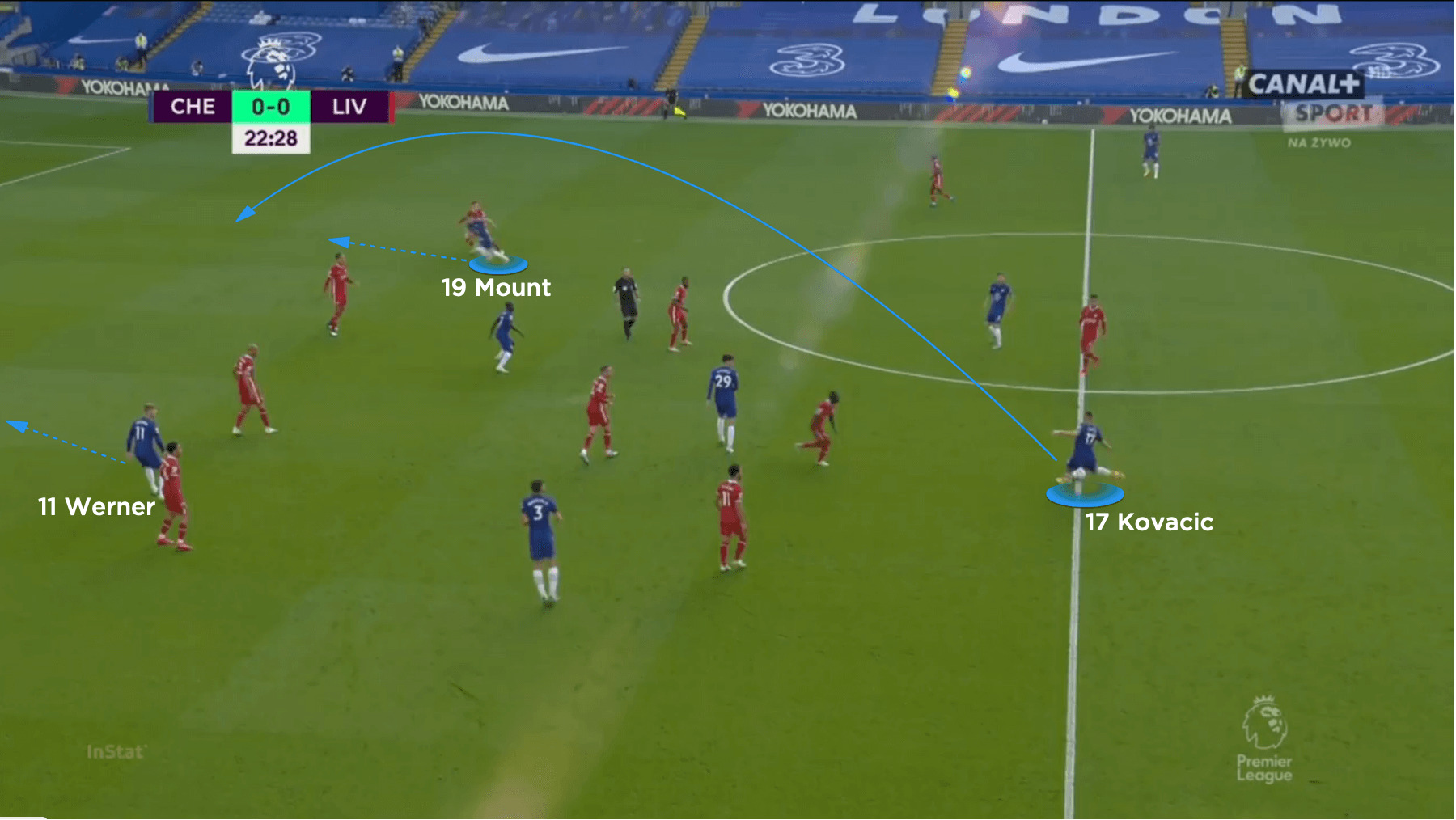 Role at Chelsea
Kovacic consistently started on the left of the midfield three in Sarri’s 4-3-3, and he has largely done the same job under Lampard. However, Mason Mount’s emergence since Lampard’s appointment has meant Kovacic sharing that role with him.

It is usually the case that Kovacic keeps his place when Lampard wants more security from his midfield, and that Mount plays when the manager wants his team to play more expansively, through one central midfielder picking up positions between the lines. Kovacic provides a far less direct threat on the opposition’s goal and will rarely move beyond their midfield line. With just one goal in 62 Premier League appearances across his first two seasons at Chelsea, his primary use is moving the ball to Chelsea’s attackers rather than receiving those forward passes. Mount’s natural game is to play that bit further forward. 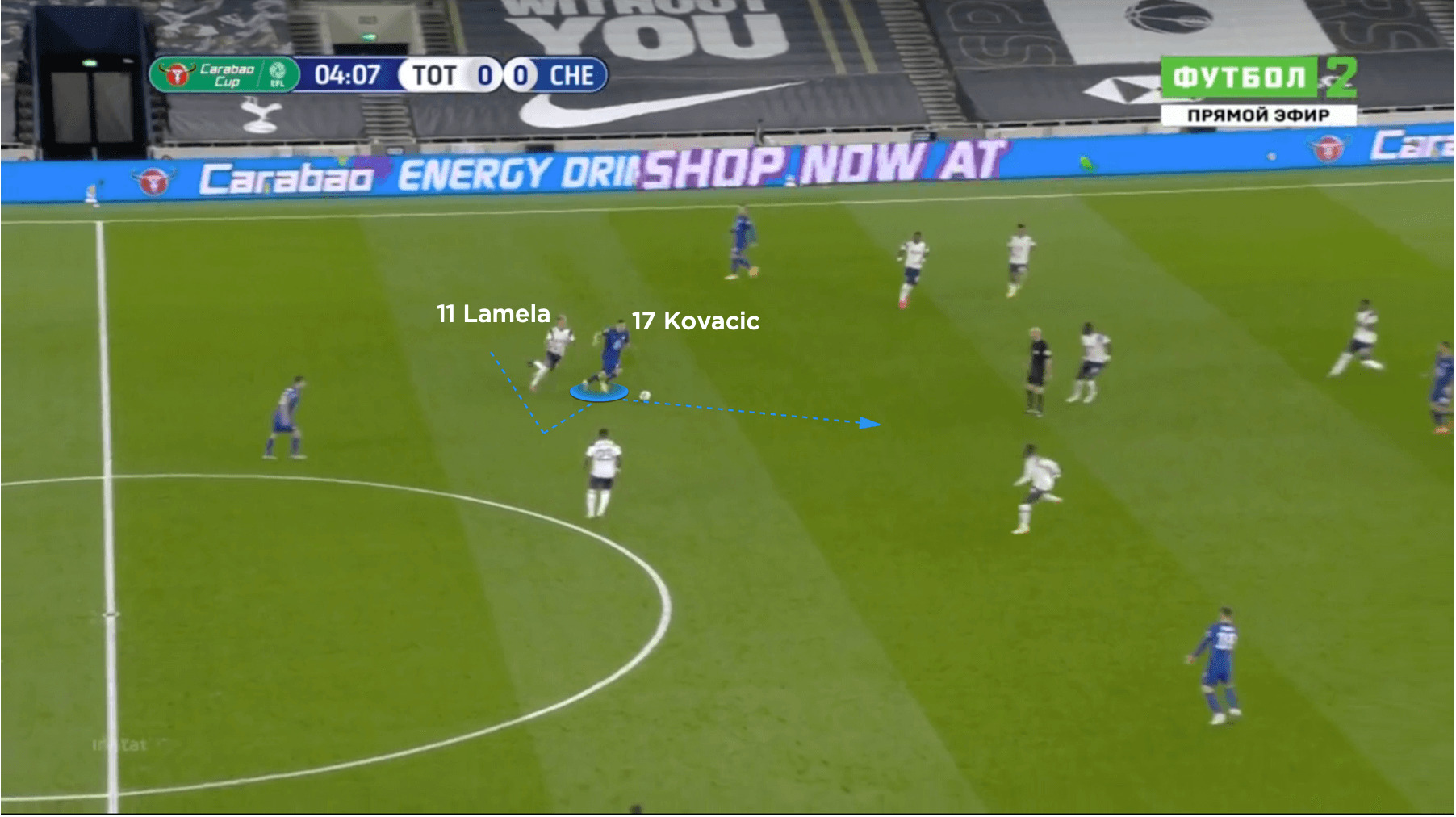 When teams attempt to pin Chelsea back by putting pressure on their midfielders, Kovacic plays a crucial role. As well playing vertical passes from the deep positions he assumes, he also looks to dribble past opponents to help his side progress forwards. Over the course of 2019/20 – Lampard’s first season as Chelsea’s manager and when the Croatian turned 26 – Kovacic completed more successful dribbles per Premier League game than any other teammate and more than any other central midfielder in the entire division. In the same way as Mousa Dembélé at Tottenham and David Silva at Manchester City, Kovacic can give his team a potentially crucial numerical advantage in a central position by dribbling past an opposing midfielder.

He holds his position exceptionally well and is extremely reliable in that regard by helping make Chelsea difficult to break down in central areas. He is also combative, and will consistently make tackles. He never, however, plays as Chelsea’s deepest central midfielder, and could contribute more in attack given Jorginho provides security behind him. As it is, Kovacic rarely makes it into the opposition’s penalty area.

A technically gifted, tenacious and tactically astute box-to-box midfielder, Kovacic is reliable rather than spectacular, but he has nonetheless become a key member of Chelsea’s improving squad. There is good reason that two different Chelsea managers have considered him so valuable. 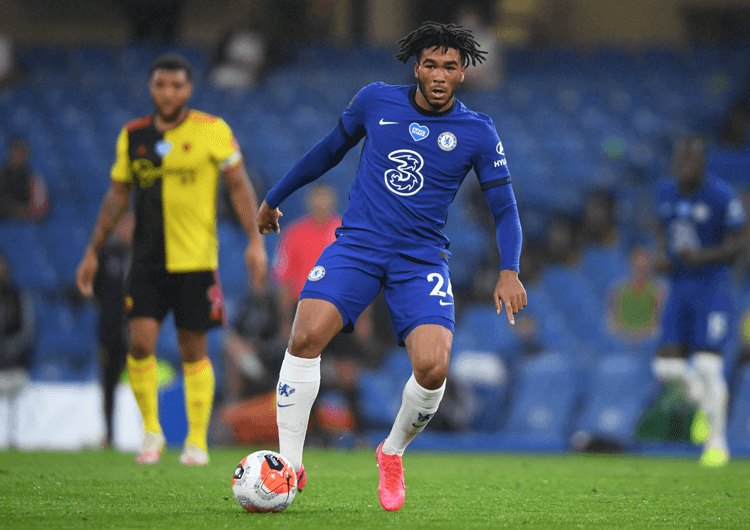 Under Frank Lampard's guidance at Chelsea, Reece James has impressively taken to life in the Premier League. We examine how far his talent can take him

Chelsea brought back one of the finest players in their history when Frank Lampard was recruited from Derby County. We assess the promising manager he is becoming