Profile
Jorginho was the signing Maurizio Sarri demanded above all others when, aged 26, he followed the manager to Chelsea from Napoli for a fee of £50m in July 2018. So admired was he by the Italian that he stressed the importance of beating Manchester City and Pep Guardiola to his signature, and made Jorginho, and not N’Golo Kanté – then the world’s leading defensive midfielder – the focal point of his midfield.

Under Sarri’s successor Frank Lampard, like Guardiola once the finest of midfielders, he has remained similarly influential. “He’s a leader in his personality,” according to Lampard. “He wants to win, and I know that should be the basics and it is the basics for everyone, but to show it in everything you do is important. He does that.”

Tactical analysis
Jorginho is a ball-playing central midfielder who relishes being the focal point of possession and controlling the build from deeper territory, linking midfield to attack, and offering regular movements across midfield to make it difficult for opponents to follow him. He favours receiving possession from within a double pivot instead of as an individual at the base of midfield, often controlling on the half-turn from the right half-space before playing a diagonal pass to the right-sided full-back or wide forward outside of him, or playing it with greater power to switch possession to the left.

He possesses the awareness required to break lines from deeper positions, and executes lofted passes when seeking to do so. By receiving to his right foot from a wide player, his side-on body position (below), similarly, encourages him to play the ball in behind opposing defences. That preference for simplicity reflects much of what he does with the ball. Instead of being the player to provide assists, he takes responsibility for receiving the ball, absorbing pressure, and then playing it to a teammate – preferably one in an advanced position. He offers security in possession, and often operates as a recycle point when his team is seeking to change the angle of attack.

For all of those abilities, what he perhaps lacks is a consistent and accurate longer-range pass, and if that were to improve, his assists return – he already assists the assist – would also. On the occasions he does travel further forwards, he moves into the inside channels, from where he plays clipped passes for the wide players alongside or in front of him, often leading to a cross into the penalty area, and therefore another way in which he assists the assist.

When his team is without the ball Jorginho’s favoured deeper position makes him capable of screening passes to opposing attacking midfielders or strikers, and he demonstrates admirable anticipation and positioning when doing so. He is proactive during moments of transition, capable of quickly engaging in counter-pressing if he has conceded possession, or covering behind advanced full-backs to delay counters if they are further forward when the ball has been lost. He can regardless continue to be vulnerable one-on-one, and when tracking midfield runners from deeper positions. For all that he remains willing, his limited physical potential means that more athletic opponents can beat him. If he operates as a single pivot, the responsibility that comes with defending large central spaces can prove challenging, particularly if he isn’t playing alongside teammates quick enough to offer him support during moments of transition. Opponents applying an intense press would relish exploiting that. 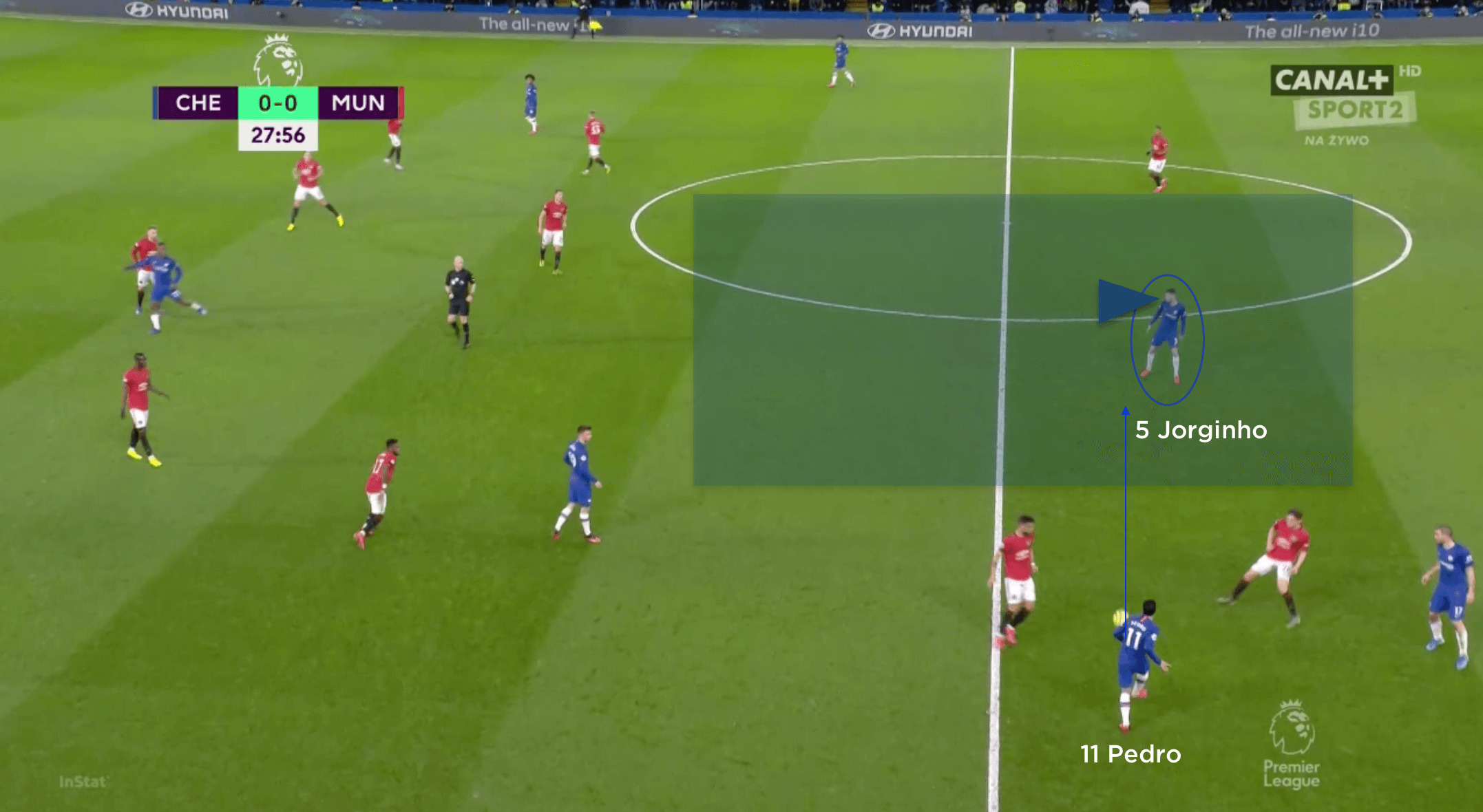 Role at Chelsea
Jorginho is most commonly selected as a single pivot in Chelsea’s 4-3-3. He is central to their build, and to the extent that they often attempt to play through him, via him linking from central defence and into those in front of him. It is therefore also common for opponents to attempt to occupy him, so Jorginho has to offer regular movement to draw those opponents out of position and receive the ball. Resisting the attention of his opponents – particularly when possession is travelling to a full-back – is among his strengths. With the nearest opponents focused on the ball, and those further back considering dropping to provide defensive protection, space often exists for Jorginho to receive in while facing forwards before then executing the next pass.

Jorginho progresses the ball when Chelsea are attempting to advance through an opposing block, and complements his ability to do so with the awareness required to recognise when to change the tempo of an attack. That there is minimal change in his approach to playing either an ambitious forward pass (below) or a routine one means opponents also find him difficult to read, and can be deceived. 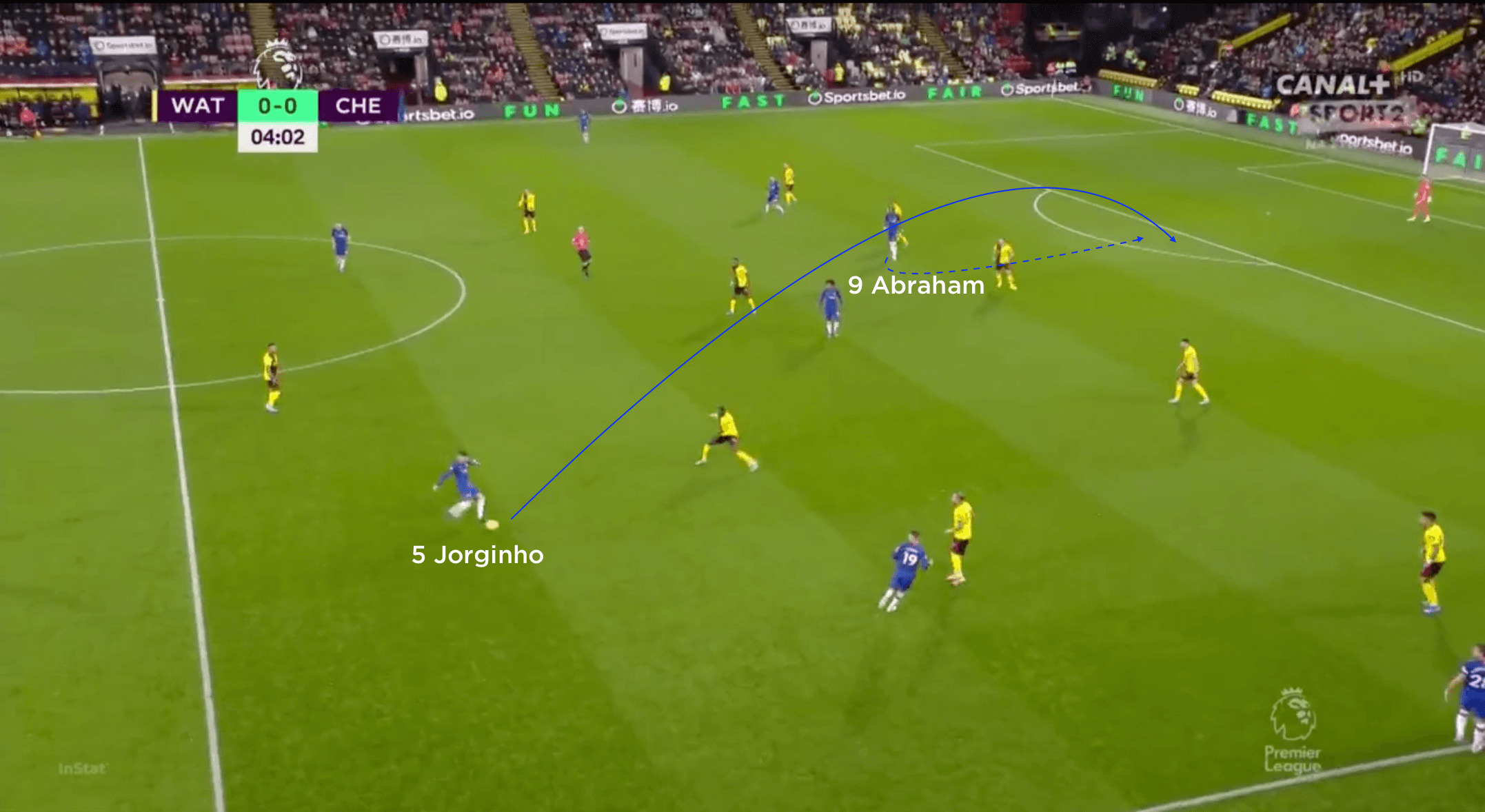 From his deep-lying role at Chelsea, Jorginho’s positioning also encourages the full-backs alongside him to advance, and therefore their wide forwards to drift infield, presenting Jorginho with numerous passing options – to between the lines, where their more advanced central midfielders prefer to operate, or towards those full-backs. His movements, and the attention he receives from opponents, also means him creating passing lines to Chelsea’s more advanced players; through testing opponents tempted to both nullify him or retain their position to prevent a forward pass, their attacking potential is increased.

On the occasions they are instead organised into a 4-2-3-1, Jorginho operates from the double pivot at the base of midfield. His responsibilities remain similar, but with their 4-2-3-1 Chelsea are far likelier to advance play in the wider areas of the pitch because of their reduced presence in attacking areas and the two-on-one that exists when the ball is wide, altering the pass Jorginho will play and, because of the midfielder alongside him, his range of movement. That further defensive midfielder also gives Jorginho the freedom to adopt a position as a false full-back, giving Chelsea’s full-backs even more attacking freedom. 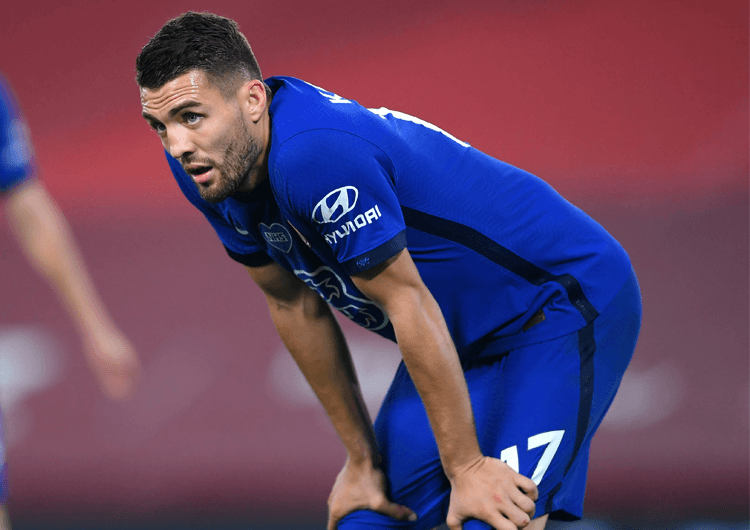 Former Real Madrid and Inter Milan midfielder Mateo Kovacic has become integral for Chelsea and Frank Lampard. We examine what makes him so important 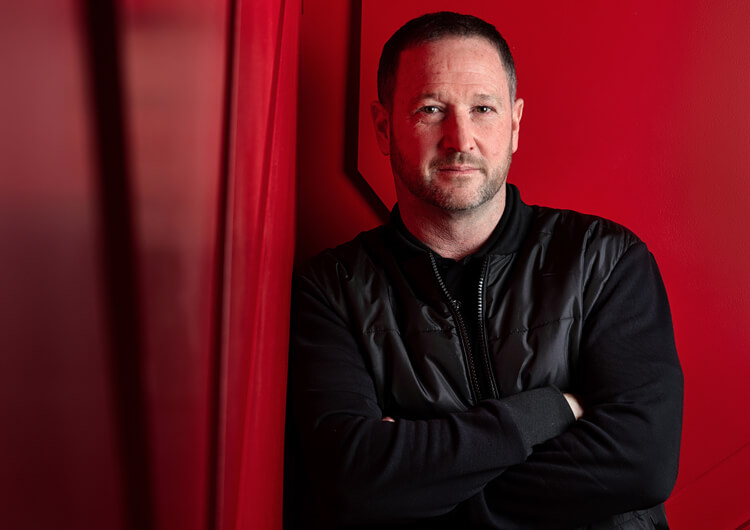