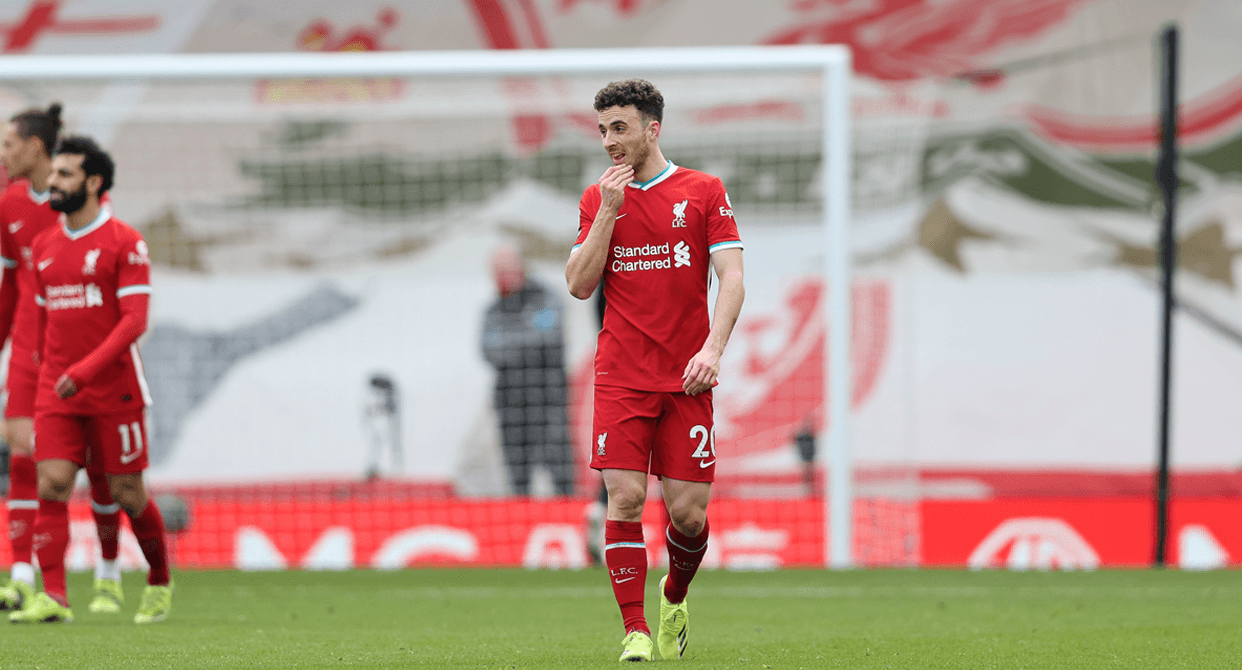 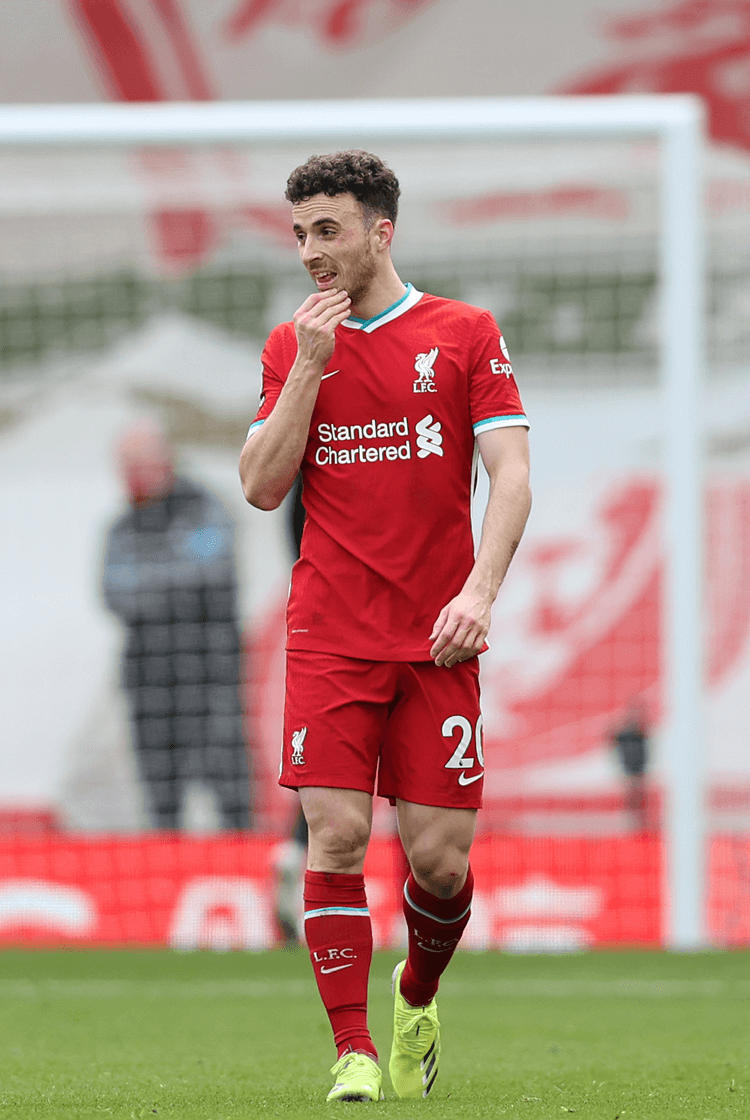 Profile
The fact that it appeared impossible for Jürgen Klopp to find a way to improve his front three felt like a welcome problem. In Mo Salah, Sadio Mané and Roberto Firmino, Klopp had one of the best front lines in recent footballing history. So, when he bought Wolves’ £45m Dioga Jota in the summer of 2020, there were some doubts about what exactly their new signing could add to Liverpool’s attack. However, Jota quickly added some much-needed competition to an attacking trio who appeared to be tiring having played so much football over the past few years, and Jota has immediately looked at home at Anfield. Injuries have limited his game time, but the extent to which his return to fitness was welcomed indicates just how valued he already is.

Tactical analysis
Jota’s greatest strength is the pace at which he carries the ball – he moves at high speed and is therefore a huge threat when there is space to break into, meaning he is particularly useful at attacking transitions. This was behind his success in Nuno Espírito Santo’s counter-attacking Wolves side and has helped him settle in quickly under Klopp at Liverpool, who look to attack quickly towards goal following a regain.

He has the ability to play off both feet and this means he is confident running either left or right when dribbling at an opponent. When carrying the ball, he shifts laterally quickly and constantly, moving to create an angle to play, and – as he is comfortable with either foot – then leaving himself able to attack into space, make a pass, attempt a shot or check back on to his other foot. His pace and two-footedness make him both extremely difficult to predict and defend against.

Though his right foot is his strongest, he is also very effective with his left, and when he is close to goal, he can shoot with either foot, meaning opponents can’t simply guide him towards a weaker foot to try to prevent him from shooting. He is extremely explosive in his movement, so he is effective at slowing an opponent down – sometimes even to a static position – before bursting away from them in any direction. He is also happy to attack small gaps between defenders and is skilled at shifting the ball cleverly between his feet in order to do this (below).

Jota is comfortable coming deep to collect the ball but is at his best when able to attack the space in behind an opponent and run in on goal. He is smart with his movement and will use runs made by teammates to make the most of any gaps in the opposition’s structure.

Given his size, he holds on to the ball under pressure impressively, able to kill the ball with his first touch and he uses his body well to protect the ball, too. However, he struggles as the focal point of an attack, both because he prefers to receive the ball facing goal rather than with his back to goal and because he is good at using the centre-forward’s movement to find space for himself. He is happy to make selfless runs away from goal from a centre-forward position, but his influence on matches naturally wanes when he is asked to do so.

Role at Liverpool
Jota has slotted in seamlessly at Liverpool, a natural fit in the high tempo game that Klopp plays, and also in a fluid front three that dovetail consistently. He has played in all three positions across the Liverpool front line since joining, and he roams all over the final third whichever position he plays in. He is more suited to the left side of attack, but given Sadio Mané carries so much of Liverpool’s threat from the left, it is unlikely that Jota’s future at Anfield will be in that position.

When he plays through the middle – flanked by Mané and Mo Salah – he drifts over to the wings more than Roberto Firmino does when he plays as the centre-forward. While Firmino is one of the best around at dropping into positions between the lines to receive passes, Jota prefers to move out towards the left. In doing so – like Firmino – he helps create space for Mané and Salah to attack.

When Klopp selects Jota at centre-forward, he wants the Portuguese attacker to do some of what Firmino does. That means Jota drops towards the ball and demands passes from midfield, but he is not anything like as comfortable receiving between the lines or on the half-turn, and often drops beyond the opposition midfield line or takes his first touch back towards where play has come from (above). The result of this is that while Firmino would attempt to turn and progress play or link with an advanced teammate out wide, Jota can slow the move down by passing up the opportunity to turn.

Jota works extremely hard to find space, though, and is constantly on the move in the final third, and that in itself can be enough to create space for others. He also works hard defensively, too, and he has adapted well to Liverpool’s out-of-possession approach. He is clever in cutting off passing lanes and he is good at adjusting the angle of his press to force the opposition’s play towards a teammate or a crowded area of the pitch. He is then aggressive in his attempts to win the ball and regains possession as often through tackles as he does interceptions.

When he has been fit, goals have flowed in the early part of his time at Liverpool, and he has linked particularly well with Andy Robertson and Mané. The three of them make runs that help each other find space on the Liverpool left, and Jota takes advantage whenever their movement creates a gap in behind or between the centre-backs. Long, direct passes forward are regularly the best route to finding him in these positions, but Robertson’s accurate crosses have also paid dividends, too (above).

It has been a tricky start to life at Anfield, largely due to circumstances well beyond his control, such as the many injuries suffered in defence, but Jota has been one of the few success stories as Klopp’s side have struggled to find the form that won them the Champions League and Premier League.