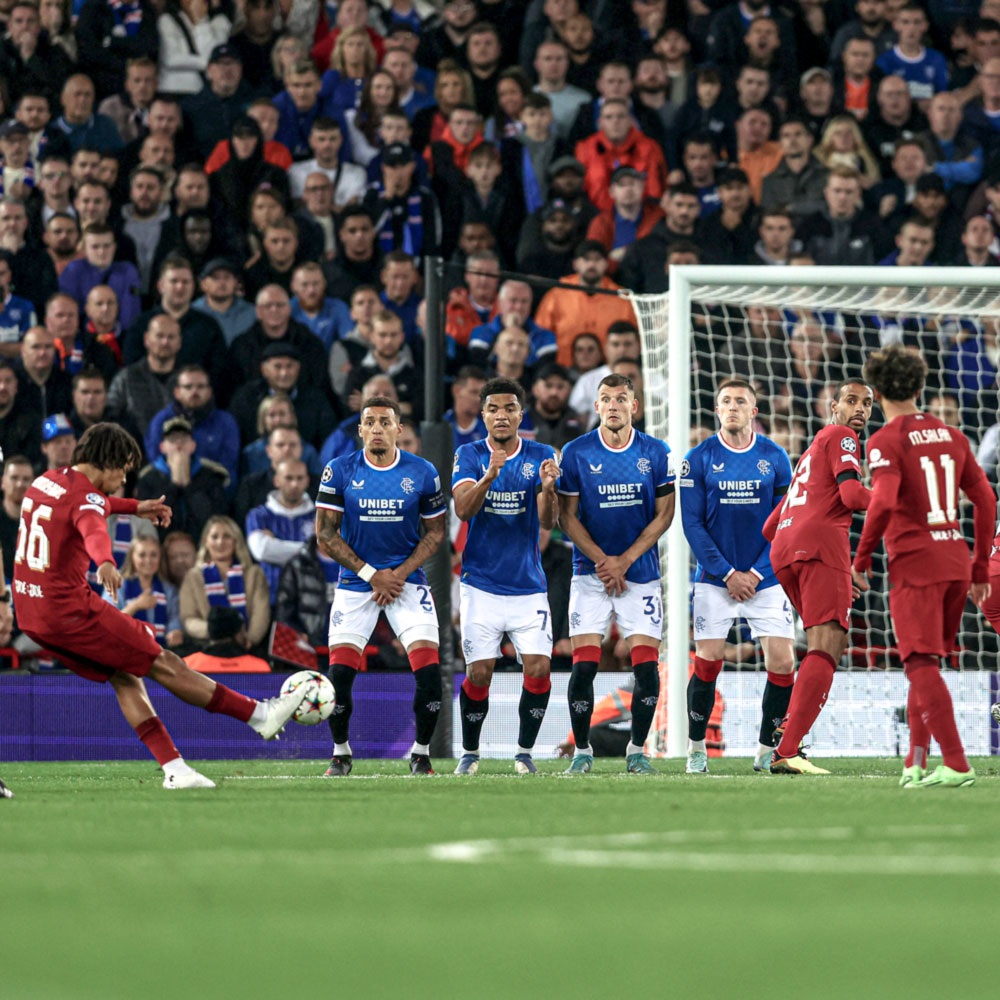 Liverpool recorded a second straight home win in the Champions League, with this comfortable victory over a disappointing Rangers team helping to ease the nerves created by an unconvincing start to the Premier League season. Trent Alexander-Arnold, whose defensive form has been under particular scrutiny, curled home an exquisite free-kick to give Jürgen Klopp's men an early lead they never looked like losing. The Reds could and should have scored more, with goalkeeper Allan McGregor pulling off a number of excellent saves to deny Darwin Núñez in particular. In the end, they settled for two, with Mo Salah scoring from the penalty spot after teenager Leon King brought down Luis Díaz in front of the Kop early in the second half.

"I think our set-up was the bigger surprise tonight," said Klopp after the game. "It was difficult to defend. Diogo Jota moved particularly well between the lines. It was a difficult game and occasion for Rangers, but we respect them a lot. We don’t think we are halfway through. Next week will be different. It was 2-0, a top game, good result, let’s go from there."

Rangers manager Giovanni van Bronckhorst was sanguine in defeat. “I think we improved in the second half but the level we face is very high,” he said. “We are competing against one of the best sides in Europe. I think we competed really well. We will learn from this game and we should take those experiences into the next game and the league.”

Jürgen Klopp initially set Liverpool up in a 4-2-3-1 structure, with Jordan Henderson and Thiago as a double pivot and Diogo Jota as the number 10 behind Darwin Núñez. As the first half evolved, however, Jota pushed forward to work alongside Núñez, while Luis Díaz inverted from the left. This created a narrow attacking trio (below), to work against the three Rangers centre-backs. Full-back Kostas Tsimikas provided the width on Liverpool’s left, while Mo Salah held a wide position on the hosts’ right. Henderson and Thiago supported around and underneath the ball, with Trent Alexander-Arnold initially quite reserved with his positioning.

Rotations within the front line

Salah eventually looked to rotate inside, with one of the original front three moving wide on the right. Tsimikas continued to hold the width on Liverpool’s left, with Díaz occasionally looking to disrupt Rangers’ second line by dropping (below). This helped free up Thiago to break lines with central passes into the front line, or switch play to the right. When Núñez drifted wider, he gave Liverpool an aerial threat from these switches of play, with Salah and Jota then able to work off the second phase. Alexander-Arnold pushed inside and further forward in these moments, adding support underneath the ball to help maintain play in the final third.

With Tsimikas positioned so consistently high, Liverpool often built with a converted back three. Alexander-Arnold narrowed and Virgil van Dijk pushed out to tempt Rangers’ wide midfielders into joining Morelos in an aggressive but often disorganised press (below). With Liverpool’s double pivot also dropping to encourage their direct opponents to jump, Rangers lacked compactness. Both Salah and Tsimikas could then drop to exploit the big spaces between Rangers’ back line of five, and their midfield and forward unit of five. The hosts built around and also over when appropriate into these wide areas, before connecting back into their narrow front three.

Dealing with the Rangers low block

Liverpool spent the majority of the game trying to break down the Rangers low block. Alexander-Arnold’s early free-kick relieved the pressure to score, though, meaning they could build patiently when Rangers dropped off into their 5-4-1 low block. With the visitors offering little on the break, Henderson could cover as part of the back line, allowing Alexander-Arnold to invert and push forward in the second period (below). Along with Thiago, he connected into the narrow attacking trio between the lines. The front three continued to rotate and occupy all three Rangers centre-backs. When Salah stayed wide, he had significant space to dribble into, taking defenders away from the front line. This created chances for the three central attackers as well as himself, although ultimately the Reds were only able to add one second-half goal as reward for a dominant performance.

Giovanni van Bronckhorst set Rangers up in a 5-4-1 formation, which in the rare moments of consistent possession developed into a 3-4-3 (below). Both wing-backs, Borna Barisic and James Tavernier, joined the next line, providing width around the central-midfield pair of Steven Davis and John Lundstram. Right-sided midfielder Malik Tillman held a much wider position in the front line, giving Rangers extra support on the right as they looked to build around Liverpool’s first line of defence. Ryan Kent often narrowed from the left, becoming a second central forward alongside the otherwise isolated Alfredo Morelos. Here, however, Barisic lacked passing options back inside or along the line. As a result, Rangers were largely unable to progress forward on their left.

Switches to the left

Rangers were consistently more effective in possession down their right, despite their overall lack of penetrative attacks into Liverpool’s penalty area. With quick passing combinations on this side helping to avoid the hosts’ high-quality central counter-pressing, they would attract Liverpool to this side of the pitch. From here, switches back across found an isolated but free Barisic to break into the final third (below). Unfortunately for the visitors, they lacked any real threat from crosses, or the numbers to combine after the switch of play.

Both Liverpool’s counter-press, and their organised high-pressing moments, limited Rangers’ impact with the ball. Davis and Lundstram were well covered by the front two in the hosts’ 4-4-2 press (below), with the wide players – mostly Díaz and Salah – blocking access from wide centre-backs Ben Davies and Leon King into their nearest wing-backs. Thiago and Henderson were impressive in their pressing, jumping on to Rangers’ two central midfielders when the front line jumped to press the three centre-backs. Once play was locked to one side, and with the centre-backs’ passing options now limited, the Rangers wing-backs were forced to drop deeper than they might have wished. This contributed to their inability to consistently progress into more threatening areas.

Any significant attacking play from Rangers in the second half came through avoiding Liverpool’s pressing double pivot. This mostly involved wide triangles, which on the left featured centre-back Davies pushing forward, Barisic moving higher and one of Kent or Morelos dropping to connect between the lines (below). On the right, Tavernier pushed forward to provide attacking width from wing-back, with Tillman (and later Fashion Sakala) supporting in the inside channel and Kent or Morelos adding another connection. This left Rangers’ right centre-back in a much more disciplined position, to cover well underneath the two central midfielders. These wide progressions worked to avoid Liverpool’s aggressive central midfield, but as a result Rangers lacked any genuine threat inside the penalty area on a welcome easy night for the Liverpool centre-backs.