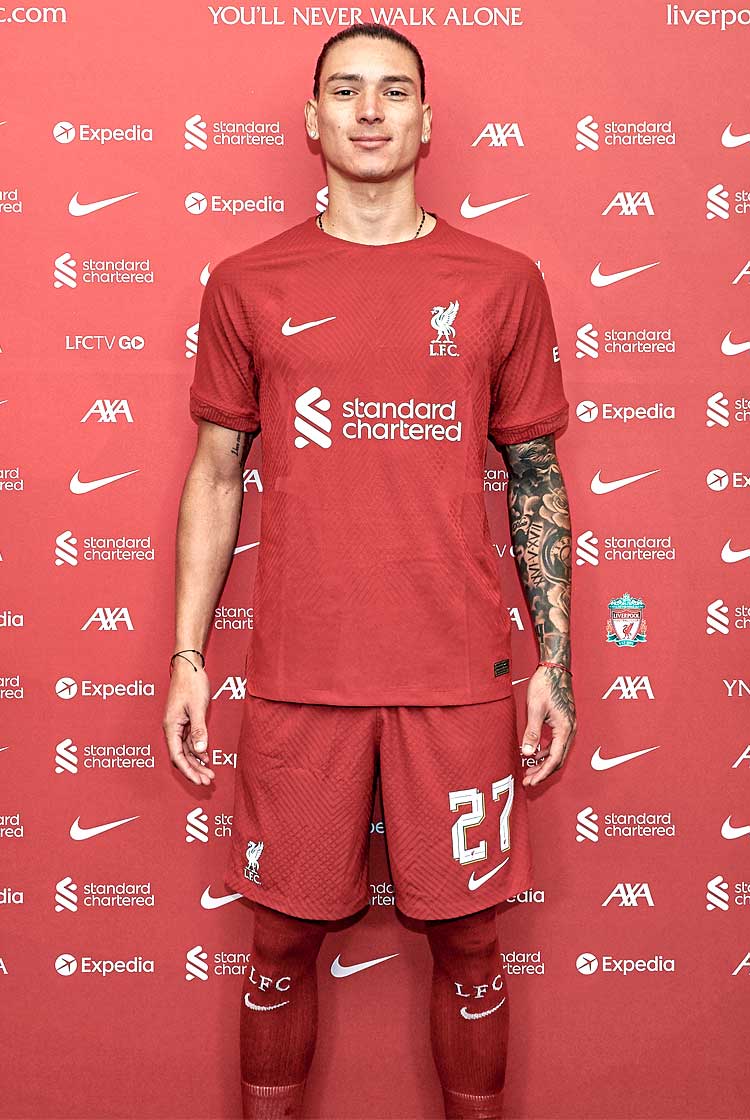 With an impressive stream of goals at every level he has played at, Darwin Núñez attracted interest from all over Europe, but it is Liverpool who have won the race for his signature. With Mo Salah, Roberto Firmino and Sadio Mané all the wrong side of 30, Jürgen Klopp has started to think about the long-term future, first with the January 2022 signing of Luis Díaz, and then with this record-breaking transfer for Núñez. Aged just 22 at the time of his move to England, Núñez has the vast majority of his career ahead of him and, having impressed Klopp when Liverpool played Benfica in the Champions League, has made an early move to one of Europe's major leagues.

“This is super news, really super news,” said Klopp. “I’m very grateful to everyone at the club for making it happen. We’ve shown decisiveness and ambition in equal measure.

“Darwin is a wonderful player; already really good but so much potential to get even better. That’s why it’s so exciting, to be honest. His age, his desire, his hunger to be even better than he currently is. His belief in our project and what we are looking to do as a club."

Núñez is a right-footed forward who can play up front on his own or with a partner, as well as out wide on the left in a front three. His finishing is the most impressive aspect of his game. Coupled with his clever movement and positioning, he provides a major threat when close to goal.

When he plays as a centre-forward, he is comfortable staying high up the pitch. There, he pins opposition centre-backs deep and makes runs across the opposition back line, often to attack the near post. He also makes direct runs in behind, but he is more effective when using his tall frame and upper-body strength to get the better of centre-backs. He is therefore most effective when attacking balls played across goal or running on to passes played diagonally in behind the opposition when close to goal (below).

Núñez is excellent in the air, and times his runs into the penalty area and across his opponent well. He is always alert to second balls close to goal and has a good striker’s instinct for rebounds, both from his own attempts and after shots from others.

His instinct and quick reactions often mean Núñez responds quicker than defenders to deflections, loose balls and through balls in tight, central spaces close to goal. Although he has the physical prowess to take on most centre-backs, he maintains an impressive calmness in front of goal. This also translates to his penalty-taking; he has a good record from 12 yards.

Thanks to his experience playing on the left side of an attack, Núñez is effective when attacking the far post. His threat from the left is similar to that of Mario Mandzukic at Juventus, with a second natural centre-forward added to the front line when the team attacks, but a front three maintained during other phases of play. Like Mandzukic, Núñez attacks diagonally towards goal to provide extra aerial threat in the box (below). The advantage here is that he often ends up competing in the air with a full-back. They are rarely as good in the air as the centre-backs next to them.

Where he differs from Mandzukic, though, is in his ability to run with the ball, cut inside from the left and shoot at goal, often aiming to bend the ball inside the far post. In this sense, he is a far more versatile and rounded forward than Mandzukic. Núñez has brilliant technique, and generates impressive pace on his shots without losing the accuracy of the strike.

When he plays centrally, he drifts into the left inside channel to help create space for others. When playing with a partner up front, his movement will drag one of the opposition’s centre-backs wider. This leaves his strike partner in more space and with a better chance of isolating the other centre-back. If he has the opportunity, Núñez then looks to put an early cross into the middle – usually low across goal – for his partner or a midfielder who has come in off the wing (below).

His movement out to the left helps instigate rotations, with the left-back overlapping around the outside and the left midfielder or left-sided central midfielder then inverting to take up a number 10 position.

Playing as a centre-forward

In his one season with Almería, Núñez was used as a centre-forward in a 4-4-2 and scored 16 league goals. As most of their play was built through the wide areas, Núñez stayed higher for longer rather than dropping into midfield to link play, remaining close to his strike partner, Juan Muñoz (below). Núñez was the main target for crosses, through balls and any direct balls forward from defence.

When they played with a 4-3-3 or 4-2-3-1, Núñez’s movements became more important. He threatened the space in behind more, which created space for the number 10 to receive between the lines. In this shape, he also rotated more with wide runners, showing how comfortable he is receiving in the inside left channel.

In a 4-4-2 structure for Benfica in 2020/21, Núñez again benefited from wide build-up, with the full-backs providing the team’s width and crosses for him to attack. The wide midfielders inverted into number 10 positions, creating more room for the full-backs to attack into. Núñez primarily played on the left side of the two centre-forwards, dropping out to combine with the overlapping left-back but also cutting back inside to shoot across goal. He also demonstrated his ability to provide for others when drifting away from his centre-forward position. He looks for early crosses into his strike partner – usually low across goal – or reversed balls towards the edge of the area for an inverted wide midfielder.

Cutting in from the left side of attack

When Benfica lined up in a 3-4-3 structure, Núñez almost exclusively started on the left side of the attack. Rotations involving the left wing-back and centre-forward allowed Núñez to cut inside and attack directly towards goal. As wing-backs naturally push further forwards than full-backs, there were more crosses for Núñez to attack. He often locks on to the opposition’s full-back when attacking a cross from the right, looking to engage them in a physical battle, or making a run across their blindside as they try to watch both their opponent and the ball.

Benfica’s wing-backs allowed Núñez to move inside earlier (above) and get closer to the lone centre-forward, and also make runs beyond the opposition. He is a greater threat on goal when he plays in a system with wing-backs. Benfica felt the benefits of that in their 3-4-3 shape in 2021/22.

He also built up a fruitful relationship with Rafa Silva, who was predominantly used on the right side of attack. Rafa is capable of drawing several opponents towards the ball, and Núñez has the ability to spot opportunities to run in behind when he does. They struck up a brilliant understanding, and the timing of Núñez’s movement combined with Rafa’s vision and creativity caused opponents lots of problems.

Núñez's goals will be the main reason for any bids that come in for him. His all-round game is already so good, however, that he has every chance of succeeding once he makes the step up to a bigger team. It will be fascinating to see how many goals he can score at the top level, and how quickly he finds his feet at Liverpool.