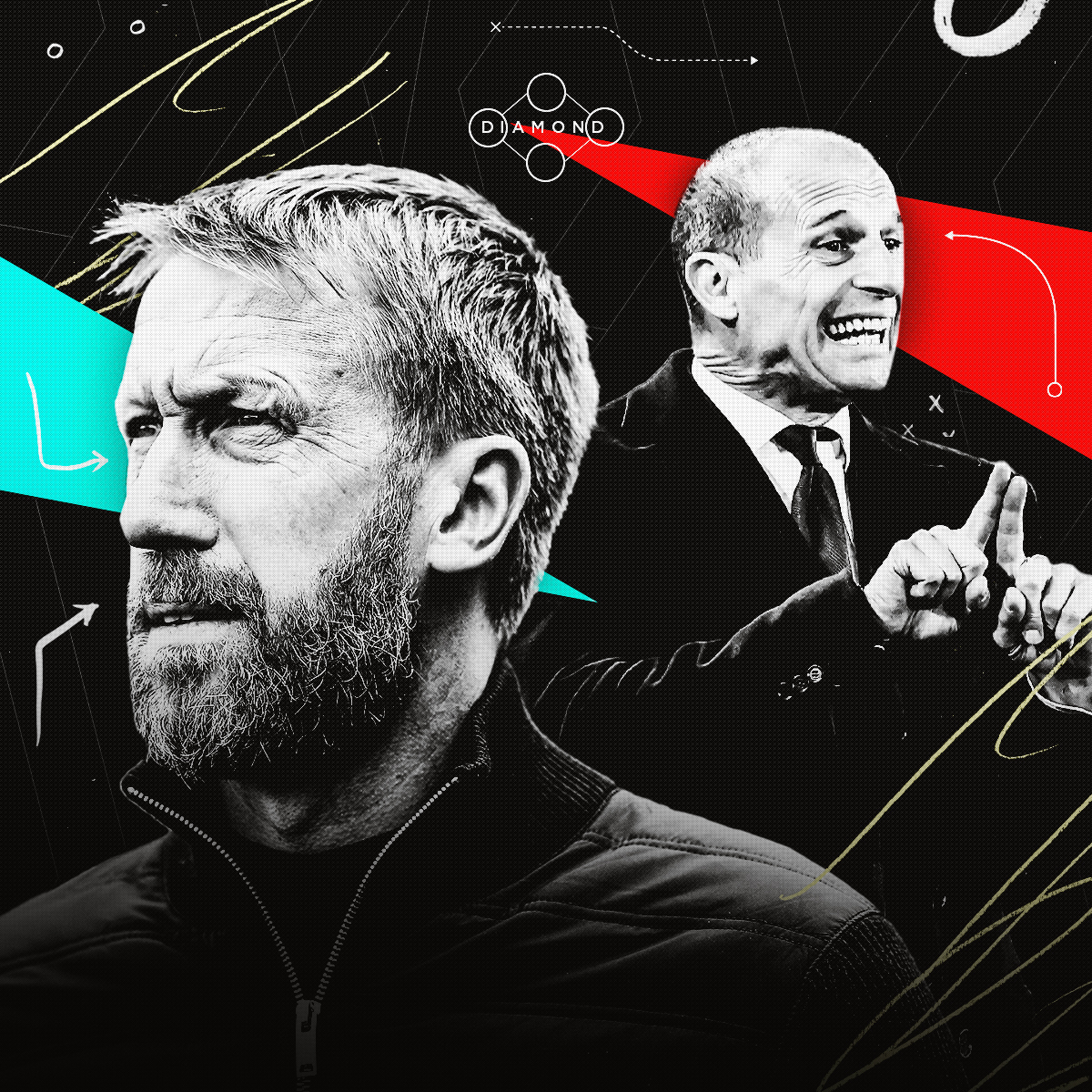 The 4-4-2 diamond formation – sometimes called a 4-diamond-2 – differs only from a standard 4-4-2 in its midfield shape. The midfield unit creates a diamond, with a single pivot at the base, two number eights on the outside of the midfield four, and a number 10 at the tip of the diamond, playing underneath a front line of two centre-forwards (below).

Where does the 4-4-2 diamond originate?

The 4-4-2 diamond emerged when the centre-forward in a 4-3-3 shape dropped towards the midfield line of three. In 1962, Brazil formed a 4-3-3 structure, with Mário Zagallo dropping out of the front line to create an overload in midfield. Despite being a centre-forward in the starting line-up, Zagallo took up positions similar to the number 10 in a 4-4-2 diamond.

At the next World Cup, in England in 1966, the hosts and eventual winners lined up with a permanent defensive midfielder – Nobby Stiles – in a 4-1-2-3 formation. Over time, the two tactical ideas would merge to form the 4-4-2 diamond.

With the 4-3-3 increasing in popularity through the 1970s, teams could easily convert into a 4-4-2 diamond through the centre-forward dropping like a false nine. The two wingers would either come inside to threaten goal or stay wide as split strikers.

What are the in-possession responsibilities of players in a 4-4-2 diamond?

The two centre-forwards provide height in attack by occupying the opposing centre-backs. They can try to hold the ball up to bring the number 10 or advancing number eights into play, or they can threaten the space in behind the opposition. They can also move into wide positions to receive long passes in space, with that kind of movement creating space centrally for midfield runners. This movement creates positioning now known as ‘split strikers’ (below).

The number 10 is the main link between the midfield and the attack, and often takes up positions between the lines – specifically aiming to threaten an area known as Zone 14 (below). The number 10 can provide runs beyond the opposition’s back line when one or both centre-forwards move wide, but their main responsibility tends to be creating chances.

The two number eights mostly work through the inside channels, and will usually play as box-to-box midfielders. They may provide the team’s width when the full-backs are too deep to push forward and join the attack.

The single pivot helps the team build out from the back, providing the link between defence and the rest of midfield. They may drop into the back line, between or to the side of the centre-backs, to allow the full-backs to push into the second line. It’s rare that the single pivot would move ahead of the ball, instead acting as the point through which the team can recycle play or switch the ball to the other side of the diamond or to the opposite flank.

Because there is no obvious or permanent wide player in the midfield or attacking units, the full-backs tend to provide the team’s attacking width in a 4-4-2 diamond. However, if the centre-forwards move wide and the number eights push forward, the full-backs may invert and move into the space the number eight on their side has vacated. This ensures that the diamond is maintained following a rotation.

What are the out-of-possession responsibilities of players in a 4-4-2 diamond?

As central midfield tends to be crowded by the midfield four, the two centre-forwards will usually aim to force the opposition inwards. They will press from out to in, setting the wheels in motion for a central pressing trap.

The two number eights will mark players or zonally protect the inside channels, aiming to prevent passes back inside from out wide. If the opponents evade the centre-forwards, then the number eights are free to jump out to press the full-backs, in the hope of stopping them from progressing too high up the pitch.

The single pivot will usually remain in front of the centre-backs and screen passes into the opposition strikers. They might jump forward if the rest of the midfield move out to press, but will generally stick to a central position.

Which teams and coaches have used a 4-4-2 diamond effectively?

After taking over from Antonio Conte in 2014, Allegri converted Juventus from a 3-5-2 into a 4-4-2 diamond in his first season in charge. Andrea Pirlo played at the base of midfield, with Claudio Marchisio and Paul Pogba as roaming number eights, and Arturo Vidal or Roberto Pereyra as the number 10. Up front, Carlos Tevez was paired with Álvaro Morata or Fernando Llorente, and the team’s width was provided by full-backs Patrice Evra and Stephan Lichtsteiner. Although it looked like a major shift from Conte’s 3-5-2, Allegri’s diamond was only different in the addition of the number 10 at the top of the central midfield unit in place of a third centre-back. The transition to that shape was smooth, with Juventus retaining their Serie A title and making it to the Champions League final in their first season under Allegri.

Potter used a variety of structures and formations throughout his time at Brighton, and he used a diamond midfield to create overloads in central areas. This shape also enabled his two centre-forwards – usually Neal Maupay and Danny Welbeck – to split and take up wide positions (below), taking the opposition centre-backs into the channels and creating space for midfield runners. Attack-minded full-backs such as Marc Cucurella, Tariq Lamptey and Joël Veltman also made runs into the space the forwards created.

Klopp has used a 4-3-3 shape throughout his Liverpool tenure, but centre-forward Roberto Firmino has been extremely effective dropping into midfield to add a fourth player here. Wide forwards such as Mo Salah and Sadio Mané move inside to become central threats on goal. The width in attack is then provided by full-backs Trent Alexander-Arnold and Andy Robertson, with the team taking up a 4-4-2 diamond shape through their rotations. After the arrival of Darwin Núñez, however, Klopp has used a more set 4-4-2 diamond in some games, with Firmino as a number 10 and Núñez and Salah a centre-forward pair free to move wide when needed (below).

What are the benefits of playing with a 4-4-2 diamond?

The main strength of the 4-4-2 diamond is the overload it creates in central midfield against any opponent with either two or three central midfielders, which includes all of football’s most popular formations. This helps the team dominate possession and create attacks in dangerous areas through the centre of the pitch, while also providing cover against counter-attacks and central numbers to counter-press in defensive transition.

The presence of two centre-forwards means both opposing centre-backs are constantly occupied. Direct balls forward are thus more likely to be secured and held up, which gives the team a strong base from which to build counter-attacks.

If a team has particularly attacking full-backs, the midfield diamond leaves plenty of space for them to push forward and get into positions to create high up the pitch.

What are the disadvantages to playing with a 4-4-2 diamond?

In order to occupy wide spaces when attacking, players have to move out of their primary position. This not only requires intelligent players who are both tactically and technically versatile, but also players with very high stamina levels.

With the diamond covering the centre of the pitch, midfielders can sometimes block off their teammates’ passing options into the centre-forwards. Therefore, access into the front two can sometimes be restricted to direct, predictable long balls, or balls into the channels for the strikers to chase.