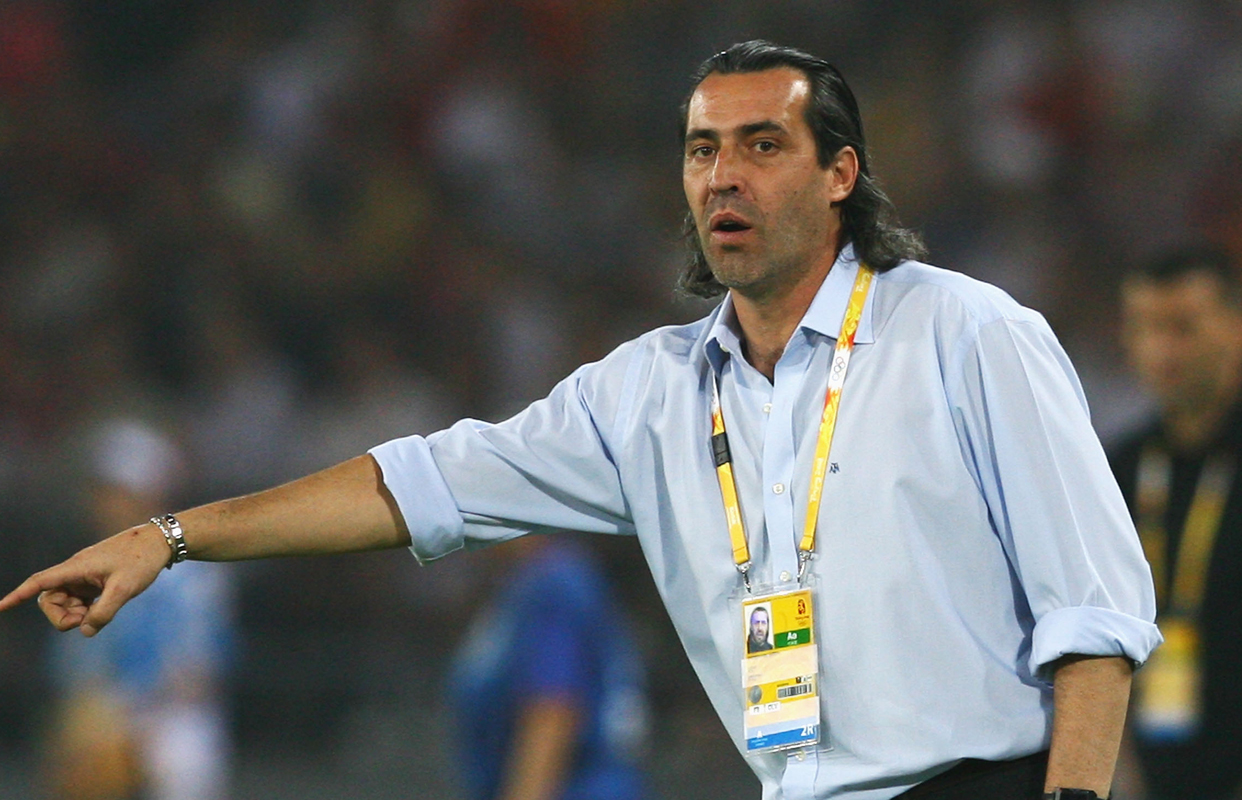 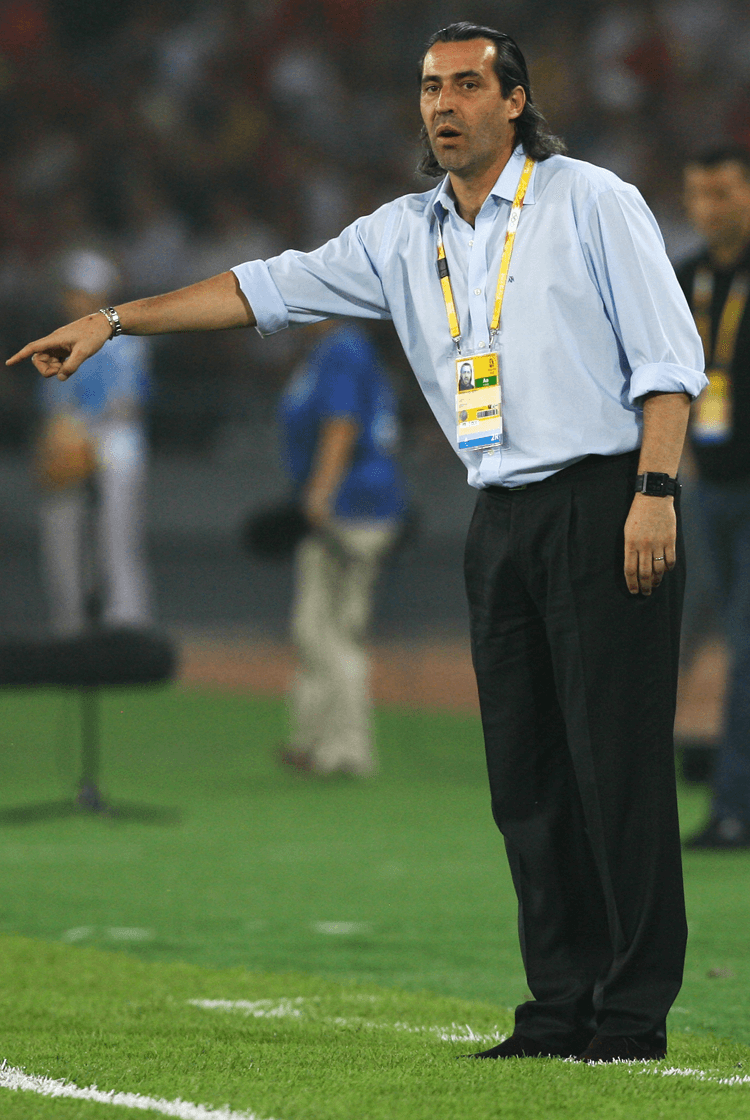 One match. After that, we’d see.

The first time I pulled on the sky blue and white of Argentina was for a friendly against Mexico in Los Angeles, just seven months before the 1986 World Cup.

Carlos Bilardo knew how I played because he’d been my manager with the national youth teams. He knew me as a person and as a player. He knew what I could bring to the team.

However, at no point did he talk to me about the future. I had to earn my place if I wanted to go to the World Cup.

Bilardo (below) was the manager who got us used to winning, and he made all of us understand what it meant to play in the World Cup. It was the best year of my career as a footballer.

He also convinced us of his way of playing. It took a while, but we got it in the end.

When he talked, he showed he was a man obsessed with the job. Always on top of every little detail, controlling everything, at any time.

He didn’t sleep much. So if he thought of something, he’d come to your room and tell you, even if you were asleep.

Once he finished what he had to say, he would close the door and leave. Then you could go back to bed.

And he would do it at any time, too. Before the first match, or the night before the final. And it didn’t only happen when we were away as a team.

"If Diego Maradona wanted to win, then he would win"

Maybe your home phone would ring in the early hours of the morning and it would be him telling you something. He lived 24-7 for the team, and he didn’t care about anything else.

Bilardo was just like that. We knew him, and we were used to it.

In Mexico, Maradona (below, top right) was at his best. Diego was very clear – he wanted to be world champion.

He did the impossible to achieve it, on and off the pitch. He was a leader in every sense.

He’s the best player ever, and at that World Cup he proved it.

To have him alongside us was tremendously reassuring. We were 10 players who knew we had Maradona in our team.

If he wanted to win, we would win.

He amazed you, most of all, in training. During matches you enjoyed it, but without the cameras – in private – he was spectacular.

Years later, I had that same feeling with Lionel Messi. At 21 he was still very young, but you could see his enormous potential.

Contrary to what a lot of people think, I don’t think Messi needs to win a World Cup to say that he’s the best player in the world.

It’s been a privilege to share a dressing room as a player with Maradona and, with Messi, (below) as a manager. There are some players you just don’t need to give instructions to.

"We didn't realise what we'd achieved as world champions"

All you need to do is let them know where their place is on the pitch. Then you know that they’ll make the decisions.

Back in 1986, we had a very strong group as well as Maradona. Bilardo had taught us the importance of having unity – and of strengthening it day by day.

So we had meetings before and after the matches. Just the players.

We’d say everything we had to say. We didn’t keep anything in.

It led to us winning the World Cup. Although, after beating West Germany 3-2 in the final, we didn’t really notice anything different.

At that moment, we didn’t fully realise what we’d achieved.

"I came back the same person after winning the World Cup"

It was when we got back to Argentina that we really became conscious that we were the world champions.

I looked out of the aeroplane window when we landed, and there was an amazing number of people. We couldn’t even get down the stairs.

We took 12 hours to get from the airport to the presidential palace, Casa Rosada, in Buenos Aires. On that journey, I realised what our title had meant to the people.

A week later I was playing a Libertadores Cup match with Argentinos Juniors. I didn’t even have a week off.

In my case – I don't know if it’s the same for the others – it wasn’t very hard to come back to the real world after winning the World Cup.

"It was one of the best generations Argentina has ever had"

I went to Mexico a certain way, and I came back the same. I still had the same friends, lived in the same house and drank coffee in the same bar.

The second time I crossed paths with Argentina was many years later, in 2008, as manager of the Under-20 national team.

I’d set out in management in a different way. I became player-manager with Tosu Futures in Japan, but after four years I decided I would retire from playing to be a full-time manager.

As a manager you still enjoy football but, above all, you enjoy working with players.

With the Under-20s I had the great fortune to work with one of the best generations that Argentina has ever had: Ángel Di María, Fernando Gago, Éver Banega, Ezequiel Lavezzi, and of course Messi.

They were all professionals with great technique and personality. It was a pleasure to see them play.

"Di Maria could turn a match at any given moment"

The challenge was to win the 2008 Olympic Games.

I drew up the list of 23 players in less than an hour. Just because it didn’t take long doesn’t mean it was easy, however. I had to leave out some players of great quality.

As ever, there was criticism of my decisions. But I put the team together based on my view of the game, and added three over-age players as the tournament allowed: Javier Mascherano, Juan Roman Riquelme (below) and Nico Pareja.

I chose them because of what the team needed. My first-choice defender had been Nicolás Burdisso, but he couldn’t come – so I called Pareja, who I knew well from Argentinos Juniors.

I knew what Mascherano and Riquelme – who were already senior internationals – could bring both on and off the pitch. It was important to have such experienced players with such a young group.

Before we travelled to Beijing, the group had a very important talk at our training camp. The lads wanted to win gold above all, for their country.

"The proposal was that I would manage Argentina. I was on trial"

We played very tough matches, against opponents of great quality, who were very physical – particularly the final against Nigeria.

In the end, it was decided with a single goal from Di María (below), a player who could turn a match at any given moment – a combination of three touches that ended with a shot on goal.

A lot of people didn’t really focus on that victory. I don’t think Olympic gold was valued highly enough.

As time has gone by, that perspective has changed. People come up to me and say: “Sergio, you were the last coach to win a title with an Argentina national team (below).”

My circle with Argentina was completed years later. I was at a camp with the Under-20s for a tournament in Paraguay when I received a message from Julio Grondona, the president of the Argentine Football Association.

He asked me to take charge of the senior team because Maradona had left after the 2010 World Cup. I asked if everything had been finalised – I didn’t want to enter into talks when another teammate was in the job.

"After getting knocked out, I left the job and chose to move away from the noise"

He told me everything had been settled with Diego. The proposal was that I would manage the team, and then they would see if I would carry on. It was a trial.

Four of my first five games in charge were against Ireland, Portugal, Brazil and Spain. We beat them all.

The best was the match against Spain at El Monumental, River Plate’s ground. Two months earlier, Spain had become world champions, with players of tremendous quality. That day, though, we beat them 4-1. The goalscorers were Messi, Gonzalo Higuaín, Carlos Tevez and Sergio Agüero.

Grondona, with the support of the players, told me that my time as caretaker manager was over and that I was to stay on as the national coach for the Copa America. That we were the tournament hosts added extra pressure.

We tried to stay out of the spotlight. I tried to prepare the team the same way I had done for Beijing.

But, sometimes in football, things don’t work. After qualifying from the group stages – we drew the first two matches and beat Costa Rica in the third – we drew Uruguay in the quarter finals.

"If Argentina don't win one match, the project is destroyed"

We played our best match of the tournament, but the game was drawn 1-1 and we lost 5-4 on penalties (below).

After getting knocked out, I had to leave the national team. I chose to move a long way from all of the noise.

I first went to China, and then to Qatar. Places where football was as different as the culture.

There’s obviously pressure to win, but the hang-up isn’t the same as in Argentina. At home, if you don’t win one match, the project is destroyed.

That’s why there are so many managerial changes.

The equation is simple. Between the World Cup and Copa America, Argentina plays international tournaments every two years.

In the last 12 years nothing has been won, so numerous coaches have been in charge. I am one of them.

Fortunately, something is finally changing. A new wave has emerged with the national team. Things are starting to be done the right way.

We need to create a development process where there isn’t a great hurry to win, but the patience to build a project that looks to the future.

Let’s hope it can be achieved, and that we can be what we used to be once again.