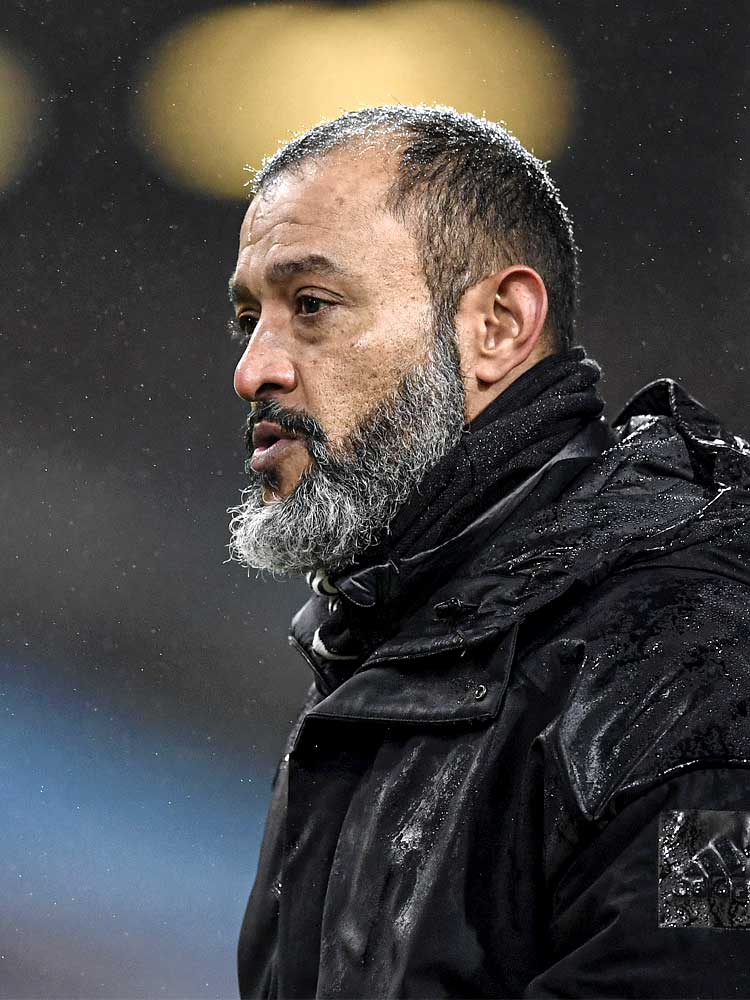 Profile
That Wolves’ 2020/21 was the least impressive of their four seasons with Nuno Espírito Santo as manager did little to harm his reputation. An awareness of how damaging were the sales of Matt Doherty and Diogo Jota and the injury suffered by Raúl Jiménez did little to affect recognition of his ability to organise his players. Nuno had proved himself capable not only of developing an impressive team with those who previously had so little experience of English football, he had also impressed in nurturing and polishing individual talents like Adama Traoré.

Once a player at Porto under the respected José Mourinho, Nuno's latest move is to succeed him as manager of Tottenham. Nuno not only built Wolves’ finest team of the modern era – he previously re-established Valencia among Spain’s leading teams after they had struggled in the years following Unai Emery’s departure, before taking Porto into the last 16 of the Champions League. ‘‘He has one of the best teams from a tactical point of view,’’ Mourinho once said of Nuno and Wolves. ‘‘That’s the way he wants to play and his team plays exactly the way he wants to play. His players are perfect for the puzzle. The characteristics and qualities are perfectly adapted to the ideas he has for his team. Really, really fantastic work he is doing.’’

Playing style
Nuno favoured organising his respected Valencia of 2014 to 2015 into playing with a back four that involved their full-backs advancing and one of their central midfielders withdrawing into central defence to form a back three while they did so. There existed an emphasis on creativity in wide areas, and crosses from those same areas into a powerful striker – Paco Alcácer, Álvaro Negredo, or Rodrigo – positioned inside the penalty area.  José Luis Gayà, Antonio Barragán, and the versatile João Cancelo provided their width from full-back, encouraging wide forwards Sofiane Feghouli and Pablo Piatti to adopt narrower positions before working the ball wide while the relevant striker remained advanced; one wide forward would contribute to their attempts to build, and the other would attack beyond their striker.

Depending on whether they had adopted a 4-3-3 or 4-2-3-1, and therefore the depth offered by those in central midfield, their wide forwards' roles would vary. If a back four was maintained behind them, they would instead become responsible for providing Los Che's attacking width; the attacking central midfielders inside them would offer the attacking movements required around their leading striker, and were particularly effective at doing so on the counter.

Similar principles defined Nuno's time at Porto, though there he more consistently favoured a front two and more direct passes. His wide forwards were therefore instructed to prioritise playing crosses into their front two, even though the full-backs behind them continued to offer overlaps (below), and to instead move infield during the second phase of play.  Their central midfielders remained in deep positions to assist their central defenders with building possession and to offer cover when their full-backs attacked; their reduced numbers there, however – even if one of their strikers moved short – also meant that less protection existed during moments of transition.

André Silva represented the focal point of Porto's attack and was supported in that role by Jesús Corona and Yacine Brahimi, as wide midfielders, and Jota, who like Rúben Neves and Willy Boly followed Nuno to Wolves, where the back three he experimented with at Valencia became his favoured approach. Wolves' 3-4-3 and 3-5-2 – their 3-4-3 provided the foundation for their promotion from the Championship – provided similar patterns to those seen with Valencia and Porto. Wolves also required fewer rotations than Nuno's previous teams.

If towards the left Wolves' wing-back offered an overlap around the forward attacking through the left inside channel and supporting Raúl Jiménez, their leading striker, towards the right, their wing-back underlapped inside the right-sided forward – perhaps Adama Traoré – as often as he drove outside of him. That fluidity not only created numerous goalscoring chances, but represented a continuation of Nuno's desire to encourage width (below); Wolves' full-backs in their 3-5-2 resembled Valencia's full-backs as much as when, while adopting a 3-4-3, they resembled Valencia's wide forwards in advancing and attacking crosses at the far post. The front two in their 3-5-2, similarly, operated like Porto's; the leading striker attacked the first phase of direct moves, and the second contributed in the second phase.

Wolves' 3-5-2 offered increased security in central midfield than that seen with Nuno's previous teams. They largely resisted making the same attacking runs, and therefore provided a significant level of cover during moments of transition, when they remained in deep positions that encouraged their wide forwards – Daniel Podence and Pedro Neto particularly relished doing so – to attack infield. From central defence, Conor Coady's diagonal passes, as was once the case with Nicolás Otamendi in Valencia, provided access into their potent wide players.

Pressing and defending
The extent to which Valencia rotated into different shapes meant that spaces emerged that made them vulnerable, and contributed to opponents targeting those around their defensive midfielders. Amid their full-backs' willingness to advance, their central defenders lacked support and faced attacks through the three central lanes; when those in central midfield withdrew to between them to offer support, Otamendi and Shkodran Mustafi moved wide to defend in wider positions, and were often beaten in the inside channels. On the occasions they instead moved to outside of those in central defence – particularly when defending with a 4-1-4-1 or 4-5-1 mid-block – they were more resilient during moments of transition, if less potent in the final third.

That Porto offered only two central midfielders contributed to their relative vulnerability during transitions, in the same way that their advanced full-backs encouraged opponents – many of which favoured defending with a low block, leading to Porto attacking with numbers – to play on the counter against them. Attacking with width against their 4-4-2 or 4-1-4-1 mid-blocks also proved effective; Porto's full-backs were regularly drawn away from their defensive line, and tempted into pressing higher than they perhaps should have, so attacks around their defensive block regularly offered potential. Their desire to trap possession towards one side of the pitch and along the touchline also meant that switches of play often worked against them; their three central midfielders pressed with aggression to support the wide players outside of them, and the far-side wide midfielder was therefore instructed to tuck infield, leaving spaces for those switches (below).

As with his in-possession approach, Nuno's methods evolved at Wolves. The back five that was occasionally used in Spain was consistently the foundation of Wolves' defence, and was seamlessly created from either their 3-4-3 or 3-5-2, making their defensive shape comparatively more difficult to progress around. Even on the occasions one of their wing-backs was tempted out of position, the presence of an additional central defender ensured that they remained compact and continued to defend with at least a back four. In comparison to Valencia and Porto, the press they applied in both wider positions and to the ball in advanced positions was significantly reduced (below).

Their attacking players instead focused on forcing the ball wide, and those in central midfield attempted to restrict access to the opposing defensive midfielder and, supported by the relevant wing-back and central defender, to apply a press intended to lock the ball towards the touchline. With those elsewhere in midfield capable of retaining their positions, switches of play were also less likely to succeed.

Regardless of their shape, a low block was a consistent feature – the regains they made in the defensive third almost doubled the total of those made in midfield – and the organisation, compactness and discipline demonstrated by their central midfielders was influential in that. With the central areas of the pitch protected, and so little space existing behind them, neither their 5-3-2 nor 5-4-1 defensive shapes struggled against lengthy periods of pressure or direct play, or to adjust and then attack on the counter.

On the occasions a central defender strayed from his defensive line to compete for possession, his movements were impressively covered by a teammate. From midfield, Leander Dendoncker proved particularly capable of providing a strong defensive presence in front of central defence, and even convincingly deputised there.