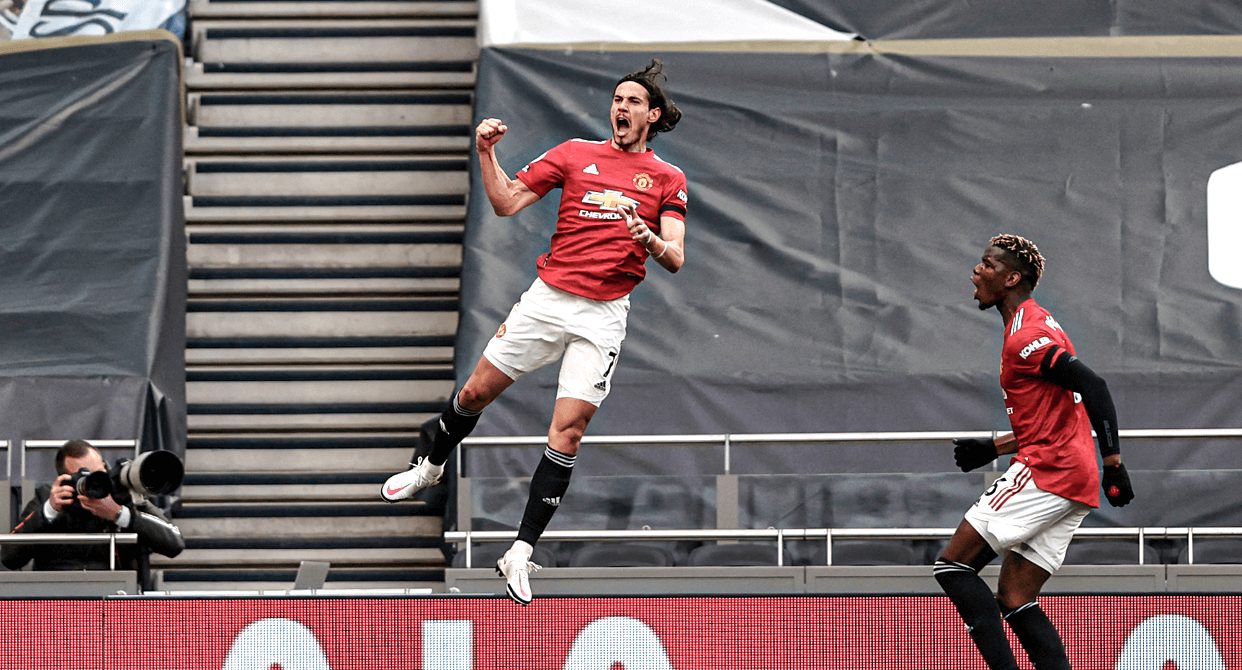 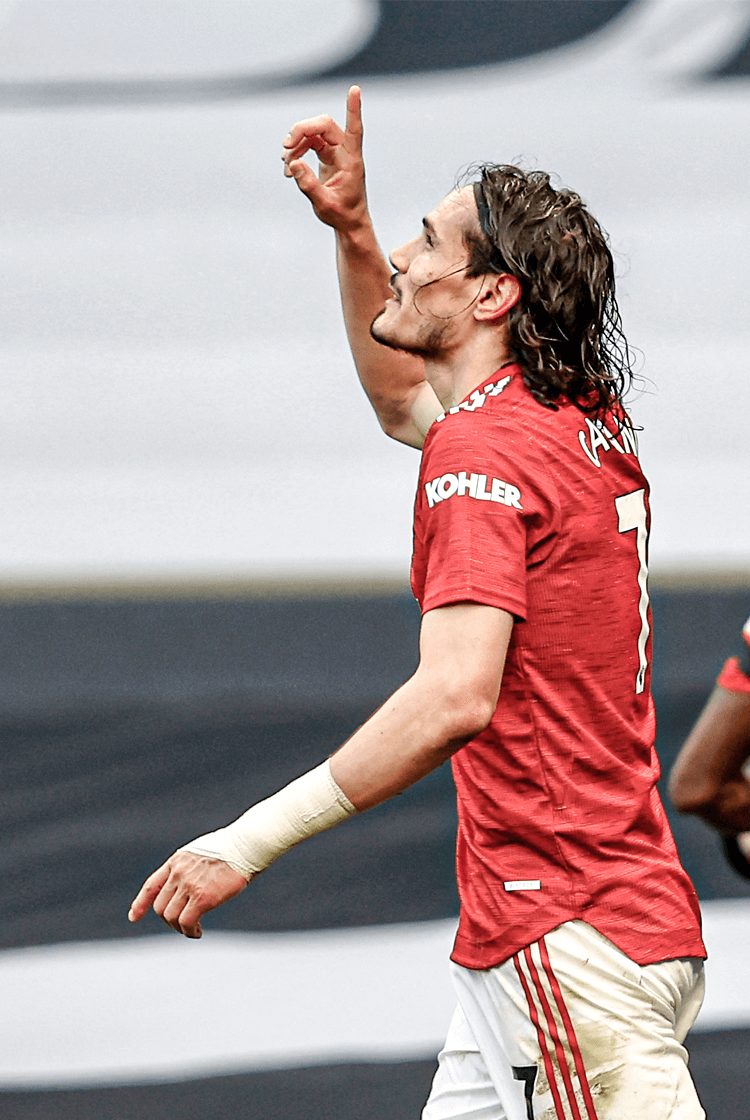 Manchester United fought back from a losing position to secure a valuable victory that could prove the end of Tottenham's hopes of finishing in the Premier League's top four. Son Heung-min gave José Mourinho's team the lead during the first half, after Edinson Cavani had already had a finish disallowed for Scott McTominay's foul on Son, but during the second, Fred, Cavani and substitute Mason Greenwood all struck to strengthen United's grip on second place. "If that's a clear and obvious error, it's an obvious error he had to look at," said United's manager Ole Gunnar Solskjaer of Cavani's disallowed strike. "It was a perfectly good goal. They are conned (by Son). We weren't conned; the referee was." Mourinho said in response: "I'm very, very disappointed. As we say in Portugal, bread is bread and cheese is cheese. I told Ole already what I think about his comments and I'm very disappointed." 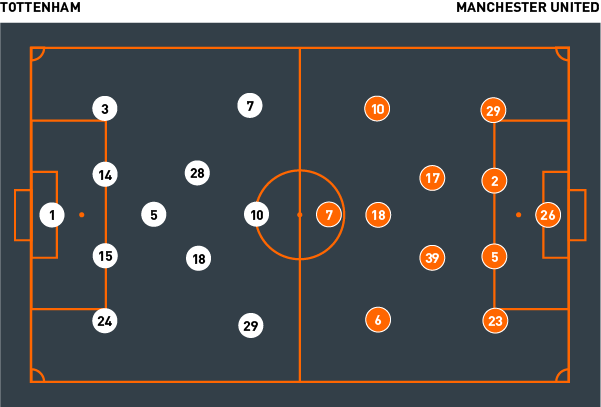 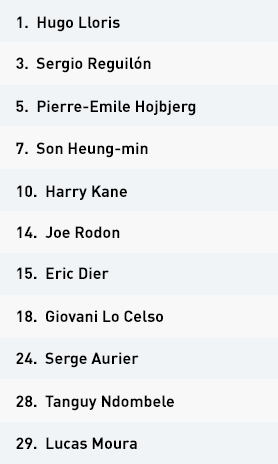 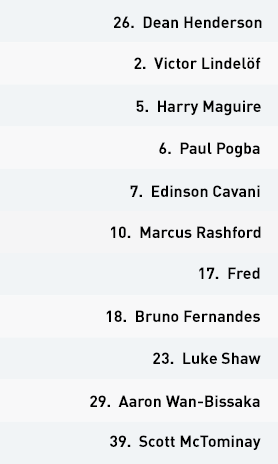 Tottenham were organised by their manager José Mourinho into a 4-3-3 formation built on the back four provided by Serge Aurier, Eric Dier, Joe Rodon and Sergio Reguilón. Their opponents, Manchester United, defended with a 4-2-3-1.

United also worked to encourage Spurs to play wide. The hosts sought to circulate possession across their back four, and because of their positional flexibility during the first half often formed diamonds in the wider areas to achieve combinations and penetrations. Their use of one defensive and two attacking midfielders encouraged Kane to remain advanced, and both Lo Celso and Ndombele proved capable of providing the link from the full-backs behind them and into attack.

Towards the left, a recurring pattern involved Son Heung-min and Kane withdrawing to towards the ball when Reguilón was in possession, drawing Aaron Wan-Bissaka and Victor Lindelöf into deeper territory and closer together, in turn forcing Harry Maguire and Luke Shaw to shuffle across, presenting Spurs with two options. The first involved runs from someone in a deeper position to in behind United's stretched defence; the other switches of play towards Lucas Moura and Aurier, towards the right, and during the first half they had some success; they resisted doing so as regularly during the second.


The movements of one attacking player withdrawing into deeper territory was also complemented by two others, from a deeper position, running in behind. If, for example, Moura moved to towards the ball when Dier was in possession at the base of a diamond, Lo Celso and Aurier, from the outside of that diamond, sought to make runs that capitalised on United's potential defensive imbalances. Many of those played in behind regardless involved the wrong weight of pass, and were therefore often collected by United's goalkeeper Dean Henderson.

There were also occasions when Hojbjerg withdrew to between Dier and Rodon to form a back three and increase Spurs' width in the first stage of their build-up and alter the angle from which Pogba and Rashford would seek to press them, in turn creating spaces for diagonal passes to be played into midfield. With United increasingly chasing the game during the second half, increased spaces appeared in central areas, contributing to promising moments of transition for Spurs, but a combination of their counters slowing too much and effective recovery runs made by United's defenders meant that they came to little.

Manchester United again played with Ole Gunnar Solskjaer's long-favoured 4-3-3, which on this occasion was led by Edinson Cavani. Their hosts, Totttenham, defended with a 4-1-4-1.

Spurs' press was led by Harry Kane closing down the inside shoulder of the ball-carrying central defender so that his next move became predictable and possession would be forced to one side of the pitch. Giovani Lo Celso and Tanguy Ndombele took Scott McTominay and Fred, and Pierre-Emile Hojbjerg provided cover between the lines from where he focused largely on Bruno Fernandes.

United sought to play into McTominay and Fred in an attempt to make the two midfielders covering them become more compact and therefore create the possibility of playing into the half-spaces and breaking beyond Spurs' midfield. Hojbjerg was essential to Spurs' defensive efforts throughout the first half; he moved to close spaces at the correct moments and to restrict United's aility to penetrate, and succeeded when their attackers moved in isolation instead of together.

Kane was bypassed by United's two central defenders, Harry Maguire and Victor Lindelöf, circulating possession with Dean Henderson, and Fred and McTominay adopted narrow positions that encouraged them to advance into the half-spaces, from where they would draw an opponent and free up a teammate. Solskjaer's team recognised the potential doing so offered, and complemented those efforts with contrasting movements between Paul Pogba, Marcus Rashford, Fernandes and Cavani to both offer a threat in behind and a passing option to feet.


A weakness in Spurs' shape featuring a single defensive midfielder existed in the way Hojbjerg could not be expected to cover the two players who withdrew into a deeper position, when Spurs' defenders were already committed to protecting the spaces that otherwise would have existed in behind them. United proved more successful when playing passes to feet and then attempting to turn, and switch play. Many of their attacks involved sweeping moves through midfield and then possession being played wide in the attacking half, and in the second half they achieved doing so with increased speed.

Pogba's runs in behind and combination play posed a consistent threat in the final third, and to the extent that Spurs often became disjointed when attempting to defend against them. As the second half progressed, Spurs also became disjointed elsewhere, particularly in midfield, where Ndombele and Lo Celso were uncertain over whether to press and when to retain their positions, and occasionally proved guilty of moving to press too great a distance at the expense of protecting spaces behind them that United eased into.

Cavani's movements, further forwards, were an even more consistent threat. His intelligent positioning on the blindside of his opponent, and the timing he showed when moving into a new position, made him particularly difficult to track, and him influential in United securing victory. He contributed to all three of their goals.