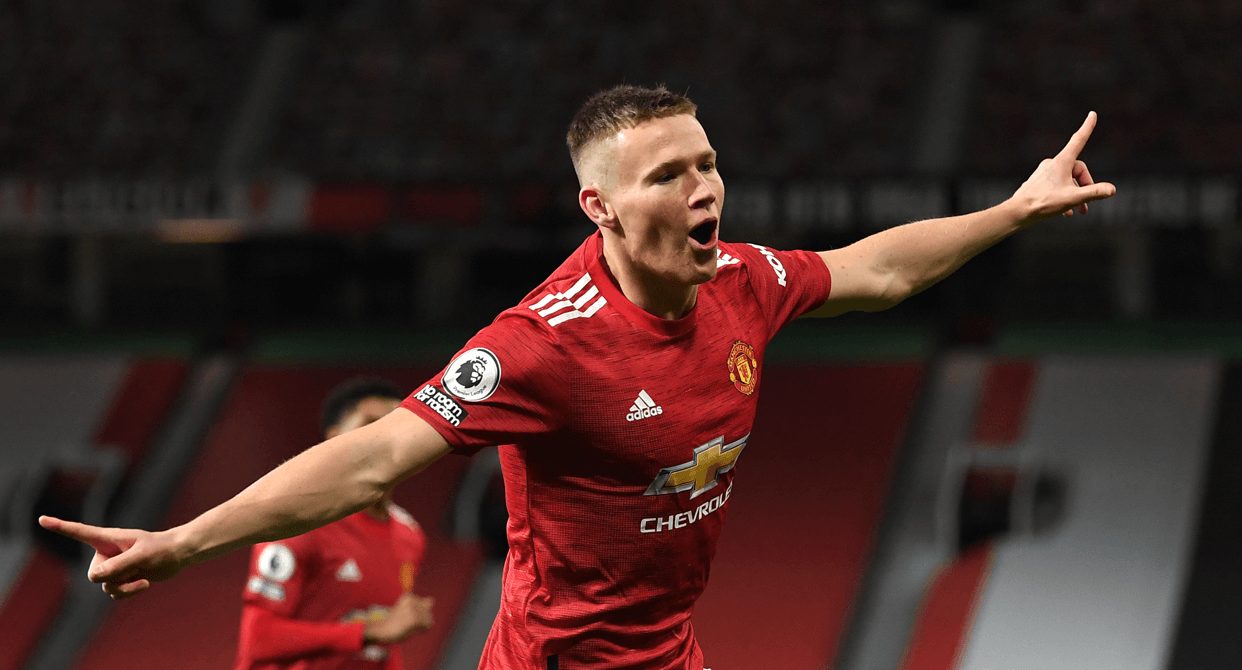 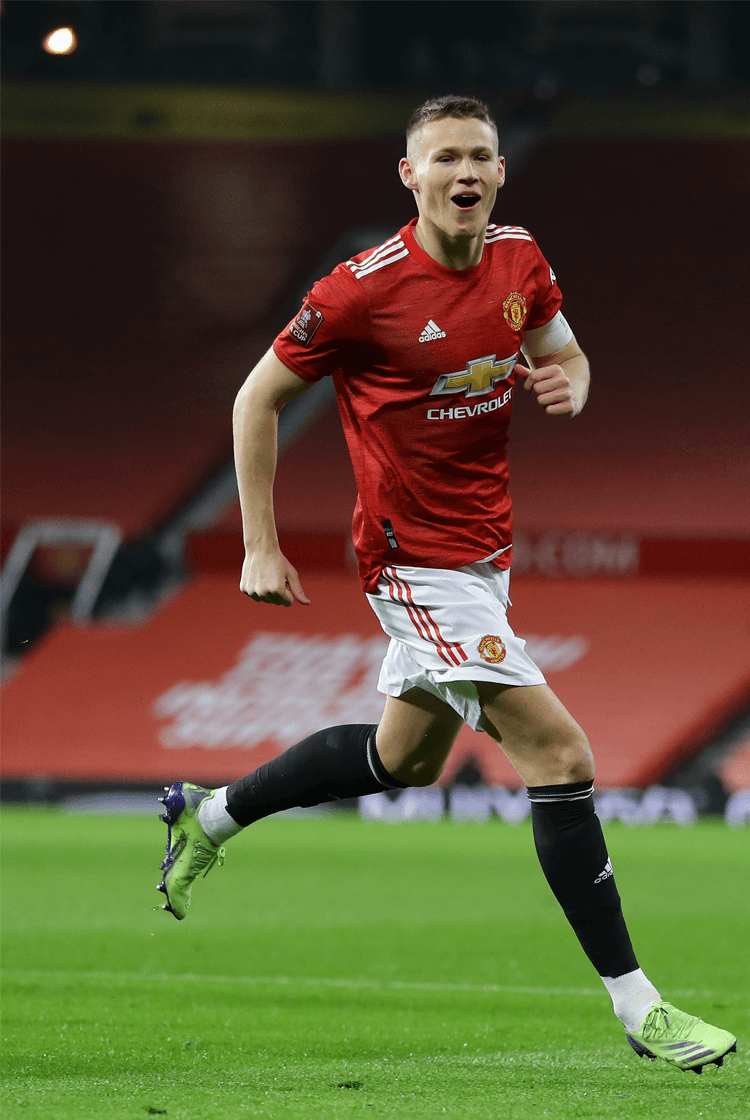 Profile
It is perhaps only the influence of Bruno Fernandes that has had a greater impact on the improvement in Manchester United's fortunes than Scott McTominay's evolution into so reliable a midfielder. Not unlike Darren Fletcher, one of his predecessors for both club and country, the Scot was considered short of the quality required to consistently convince for so decorated a club, and yet he has improved to the extent he is one of their most reliable performers – and one often keeping several expensive signings out of United's midfield.

“He’s a physical monster," said United's manager Ole Gunnar Solskjaer, a senior player at Old Trafford when Fletcher emerged, of McTominay shortly after his 24th birthday. "He does all his work every single day meticulously – never shirks anything and he gets his reward by his fitness. His technical work as well is improving. He can do everything."

Tactical analysis
McTominay is both confident and comfortable on the ball from his favoured position at the base of midfield. He frequently scans his surroundings – particularly in the moments before receiving possession – and, where possible, favours playing with his right foot. When passes are received from his left he therefore favours allowing the ball to run across his body, unless that pass lacks power, when he will instead feign stepping towards it to encourage his marker to press tighter, close off that side, and at the last moment open up his body to push the ball around that opponent and take control with his favoured right foot.

By doing so, McTominay not only receives on his stronger foot, he also opens up forward passing lanes having drawn opponents to his left. Rarely will he beat an opponent by dribbling at them, one-on-one, so he instead prioritises the nature in which he receives the ball before playing it forwards with a typically powerful pass. That those passes are so often delivered at speed makes it likelier he will succeed in break lines – opponents will consistently struggle to successfully intercept.

McTominay's patience and intelligence with the ball – not least in the defensive half – represent further strengths. He regularly pauses, stops, twists and turns when the passing options he seeks aren't available, so instead of playing possession backwards he retains it for as long as he can until he can send it forwards or has no choice but to reset it with a backwards pass. Those subtle movements with the ball also move opponents, potentially creating new passing lanes, or securing time for teammates to adopt new positions.

That he is so physically powerful means him using his upper body strength to resist opponents and shield and protect the ball while searching for the target of his next pass. He complements that power with deceptively quick feet that mean him also occasionally accelerating into space – only a lack of convincing pace over longer distances, not least when he is under pressure, and the agility to repeatedly change directions over shorter ones stops him more effectively carrying the ball.

He regularly makes valuable defensive contributions. He is as capable of duelling in the air as he is of pressing through the middle third of the pitch, and his positioning and willingness to cover behind teammates as the second defender mean he regularly makes interceptions – his most common method of recovering the ball. That versatility also extends to him effectively protecting the spaces in front of central defence, whether covering direct balls into opposing strikers or marking and pressing attacking midfielders.

It is towards the right that he is most effective when defending and where he makes the most his tackles. He tracks and dispossesses both wide players travelling infield and overlapping full-backs, and is sufficiently patient to pursue numerous runs and movements made by his target without losing the aggression and desire that so often brings him success. His upper-body strength is also similarly valuable when he competes for loose or second balls in the central lane.

Role at Manchester United
McTominay has become a regular in the double pivot of Solskjaer's 4-2-3-1, in which he favours featuring on the right. His chief responsibility when they are attempting to build play is to support behind the rotations unfolding towards the right, which are more complex than those on the left. Aaron Wan-Bissaka overlaps from right-back when Mason Greenwood drifts infield, and McTominay protects the spaces behind Wan-Bissaka and withdraws to alongside United's two central defenders to instead form a back three. On the occasions Daniel James or Marcus Rashford replace Greenwood as United's right-sided wide forward, Wan-Bissaka instead seeks to make underlapping runs and, because of the presence of the influential Fernandes, the full-back's forward runs are delayed. McTominay's cover, regardless, remains consistent.

Fernandes' desire to drift towards the right has meant Wan-Bissaka occasionally resisting some of the forward runs he once made, and therefore McTominay having further opportunities to make attacking runs of his own (above), which he mostly does into the areas Fernandes vacates. Regardless of his aerial presence, he rarely connects with crosses delivered from the right because the angle of delivery too rarely complements the line of his run, so he instead prioritises receiving to feet and then linking with other teammates making forward runs, often drawing defenders away from United's most attacking players.

If he is providing that support from deeper territory, McTominay's forward passing (above) heightens United's attacking potential – not least when they are unable to attack with width. He regularly succeeds in finding teammates between the lines, where Fernandes and Edinson Cavani, particularly, both relish operating.

From left-back, Luke Shaw overlaps at a far earlier stage than does Wan-Bissaka; because Rashford and Anthony Martial, most commonly United's left-sided forwards, favour attacking infield, Shaw remains wide. McTominay complements their efforts by effectively switching play from the right (below) to continue to progress possession, particularly if opponents have attempted to overload the right side of United's structure. Shaw's width and Rashford's narrow starting position make Shaw the likelier target of McTominay's switches – particularly given it is far from uncommon for United to encounter a low defensive block and for Rashford to be marked by two defenders.

When United have experimented with Paul Pogba as their left-sided wide forward, McTominay varied those switches in the knowledge that Pogba was superior to Shaw and Rashford at receiving in the air against an opposing full-back. Should Pogba instead feature alongside McTominay in the double pivot at the base of United's midfield, the Scot makes fewer forward runs.

It is when he is alongside Nemanja Matic or, as is most consistently the case, Fred, that he has greater freedom to attack and support around Fernandes' movements – a dimension he has added since the Portuguese's arrival in January 2020. That he can shoot with the same power with which he passes ensures that he poses a threat from some of those positions, ones he adopts in the spaces created by United's attacks focusing on attacking through Fernandes and into their wide players.