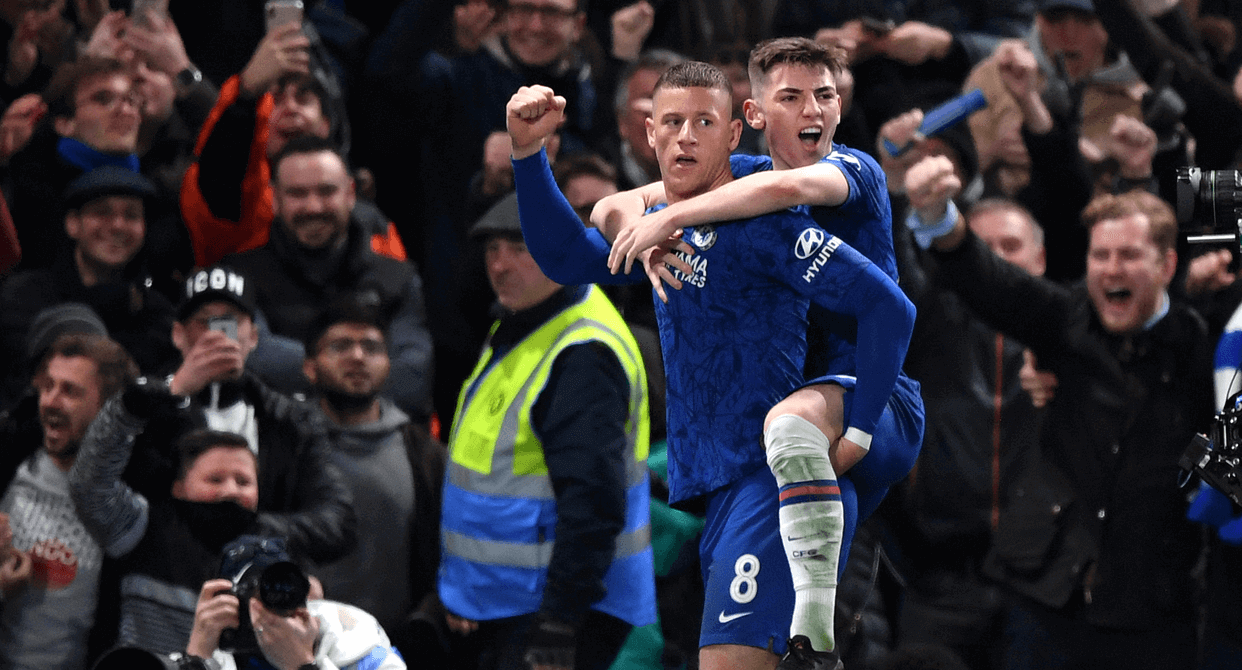 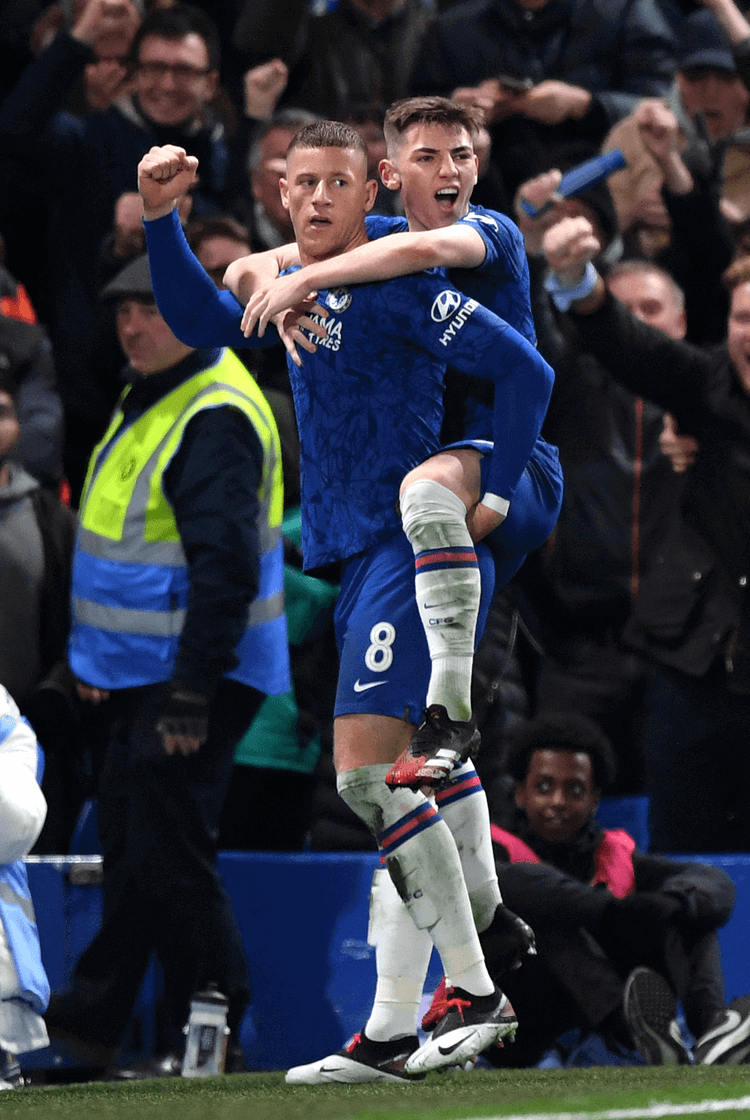 Chelsea reached the quarter final of the FA Cup with an impressive 2-0 victory over Liverpool at Stamford Bridge. Still in contention for the Premier League points record, Jürgen Klopp rested several leading players, but his gamble failed to pay as Chelsea, almost at full strength, comprehensively ended Liverpool's treble hopes. Teenager Billy Gilmour impressed at the heart of Chelsea's midfield, and goals from Willian and Ross Barkley, once of Everton, proved enough to see off their below-par opponents. "What an incredible performance for a young player," Chelsea's manager Frank Lampard said of Gilmour's display. "He was a calm head in that first five or 10 minutes. He's a throwback of a midfielder. He's only slight in stature but he's huge in personality. He deserves people to talk about him after a performance like that." "It is not the best three weeks of the whole season but it is a chance to make it the best three weeks now and that is the plan," said Klopp. "Nobody has to feel sorry for us, we will win football games and that is what we want to do on Saturday." 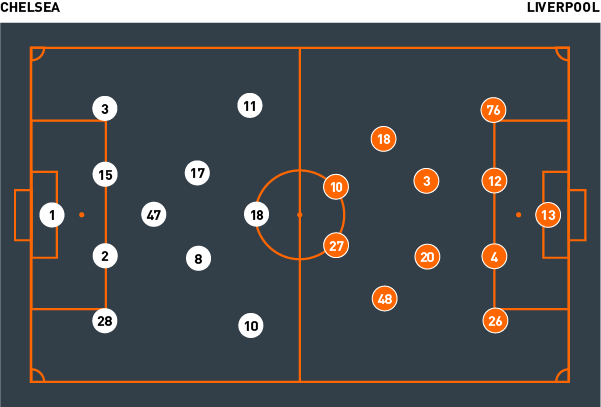 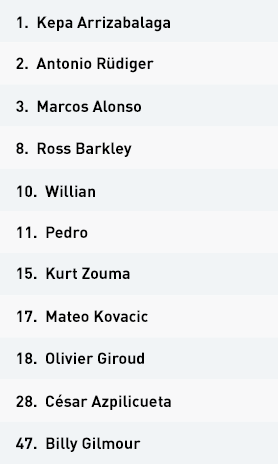 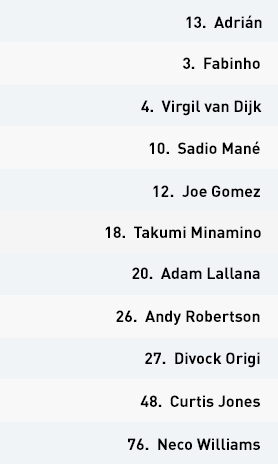 Chelsea manager Frank Lampard set his team up in a 4-3-3 formation, featuring the 18-year-old Billy Gilmour in defensive midfield behind Ross Barkley and Mateo Kovacic, while they were in possession. Barkley advanced in an attempt to draw Fabinho away from the centre of the pitch, with the hosts building the majority of their attacks down the right before attempting to switch play to Pedro or the overlapping Marcos Alonso, towards the left.

Liverpool’s inexperienced right-back Neco Williams consistently advanced, leaving space behind him that Chelsea sought to exploit. The defensive work of Alonso and Kovacic encouraged Pedro to remain in an advanced position and to offer a counter-attacking threat via a quick forward pass, and Olivier Giroud occupied Joe Gomez, forcing Liverpool to shuffle across, and unintentionally creating space for Willian, who scored from the edge of the penalty area having drifted into a gap in the centre.

When Liverpool had possession in advanced areas Chelsea withdrew and adopted a 4-2-3-1, in which Kovacic joined Gilmour in a double pivot, and assisted Alonso with the threat posed by Williams, Sadio Mané and Adam Lallana on Chelsea's left.


When the opportunity to push slightly further forwards presented itself Chelsea used a 4-5-1, in which one of their midfielders pressured Fabinho, but this tested them when the Brazilian played beyond his marker, because Liverpool had greater numbers in central midfield. It was this that led to Liverpol’s finest chances of the game, when the returning Kepa Arrizabalaga made some important saves.

Achilles injuries forced Chelsea into making changes either side of half-time, when Willian and Kovacic were replaced by Mason Mount and Jorginho. Pedro switched to the right, Mount played from the left, and Jorginho joined Gilmour in central midfield. Chelsea struggled to retain possession for any considerable periods thereafter; Barkley was too keen to advance to press Virgil van Dijk, leaving two teammates against Liverpool’s midfield four.

Chelsea played with less width in attack as play progressed. Central combinations on the break created their second goal; Barkley advanced through the middle and superbly struck to double Chelsea’s lead as Liverpool pushed forwards in search of an equalising goal. Pedro threatened to add a third on the break, but he was denied by Adrián.

Much of Jürgen Klopp's gamble involved Liverpool starting with an unfamiliar, lopsided 4-2-2-2 formation while they were in possession. Adam Lallana and Fabinho played at the base of midfield, and Takumi Minamino and Curtis Jones adopted auxiliary number 10 positions behind Divock Origi, who stretched play by moving to the left from his striker's position.

Klopp’s team defended with their usual 4-3-3, but they were vulnerable to transitions behind stand-in, teenage right-back Neco Williams, who regularly attacked. On the left, Andy Robertson didn’t advance as frequently, owing to Origi’s position wide on the left.

Liverpool strung together early chances that owed to their greater numbers in central midfield. Minamino and Jones played sufficiently narrow so that Liverpool had a four-on-three there; they were able to draw Billy Gilmour or Mateo Kovacic out of position and to play passes to players between the lines. Only Chelsea goalkeeper Kepa Arrizabalaga denied, with a succession of fine saves.

Another route of attack came through Joe Gomez carrying possession out of defence towards the right, encouraging Lallana to advance and to support Jones and Sadio Mané, but Liverpool struggled to capitalise, and Chelsea then responded by lowering their block to reduce the spaces between defence and midfield. As Liverpool chased an equalising goal in the second half, both full-backs advanced, and Origi positioned himself in between right-back César Azpilicueta and central defender Antonio Rüdiger. Minamino floated between the lines, and Lallana and Jones sought to slide balls towards the playmaker or to put Robertson or Williams into spaces in wide areas.

Liverpool’s full-backs stretched the pitch to its maximum width, to create spaces to play out from defence, but doing so unintentionally created spaces in central areas for Chelsea to counter-attack into after they switched to a narrow 4-2-3-1. Ross Barkley capitalised with a fine finish on the break when Liverpool were caught with just three players behind the ball. Chelsea subsequently withdrew even deeper to prserve their two-goal lead, and when Roberto Firmino, Mo Salah and James Milner were introduced as substitutes.