Profile
Towards the conclusion of a year in which he has been so influential a figure in Liverpool winning the Champions League, European Super Cup and Club World Cup, Sadio Mané was named the Premier League’s player of the month for November. His three goals and one assist in four appearances contributed to their commanding lead, from first place, and one of those goals came against rivals Manchester City. The Senegalese has been named player of the month three times throughout 2019, and most recently ahead of fellow nominees Dele Alli, Raúl Jiménez, Lys Mousset, Son Heung-min, Caglar Soyuncu, and Jamie Vardy.

“It’s amazing, Sadio has been outstanding for a long period of time now,” said Liverpool’s manager, Jürgen Klopp, of the former Southampton forward. “He just needs to continue that form. He’s a fantastic person off the pitch. He dedicates his life to football.” Alongside Mo Salah and Roberto Firmino, he may even be forming the world’s most lethal front three.

Tactical analysis
Mané’s speed is unquestionably one of his greatest strengths (below). His explosiveness, even without the ball, is key to Liverpool’s attempts to apply a high press, and his aggression and dynamism when competing contributes to further goalscoring chances for himself, and for those around him.

While attacking one-on-one he is capable of gliding past opponents – particularly when receiving possession on the move – and he can burst into a sprint from a static start in a way few others can, particularly over five-to-ten yards. His ability to change speed, to time his moves inside and to combine with teammates are, similarly, strengths. 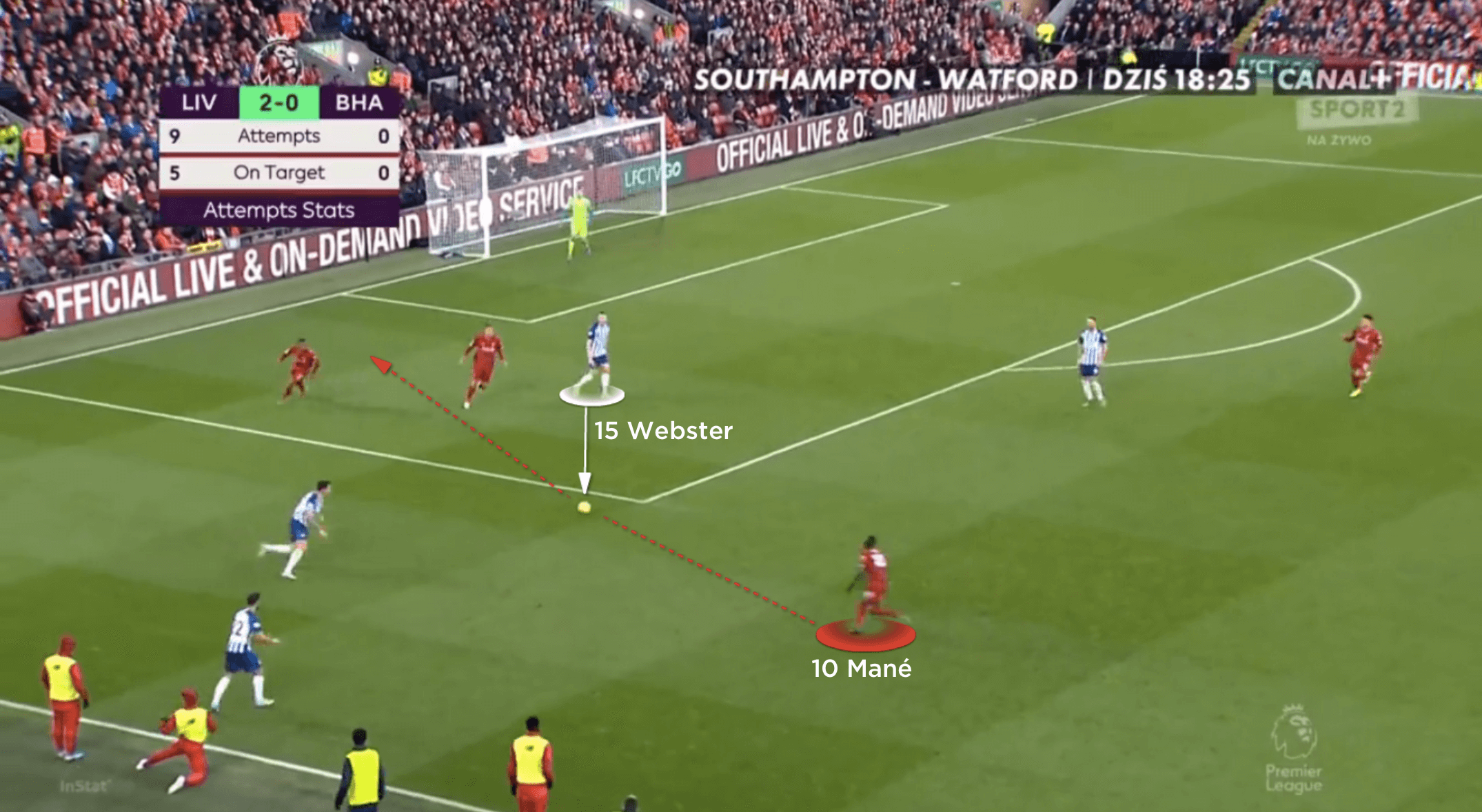 It is those same qualities that contribute to the forward creating the brief windows to shoot from which he often scores. He shifts his balance impressively quickly to create a sight of goal and, with his improving shooting ability, regularly finishes.

Mané’s goals return improved significantly during 2018/19. If he is at his most threatening from within the inside left channel, he is scoring a greater variety of goals (below), and has evolved from a winger into an attacker who is consistently potent in central areas, often beyond the most advanced attacker. He is still running along the wing and outside an opponent before shooting from an angle, and that he also offers an aerial threat, particularly when diagonally attacking a cross against a recovering midfielder or full-back, has furthered his ability to be so prolific. 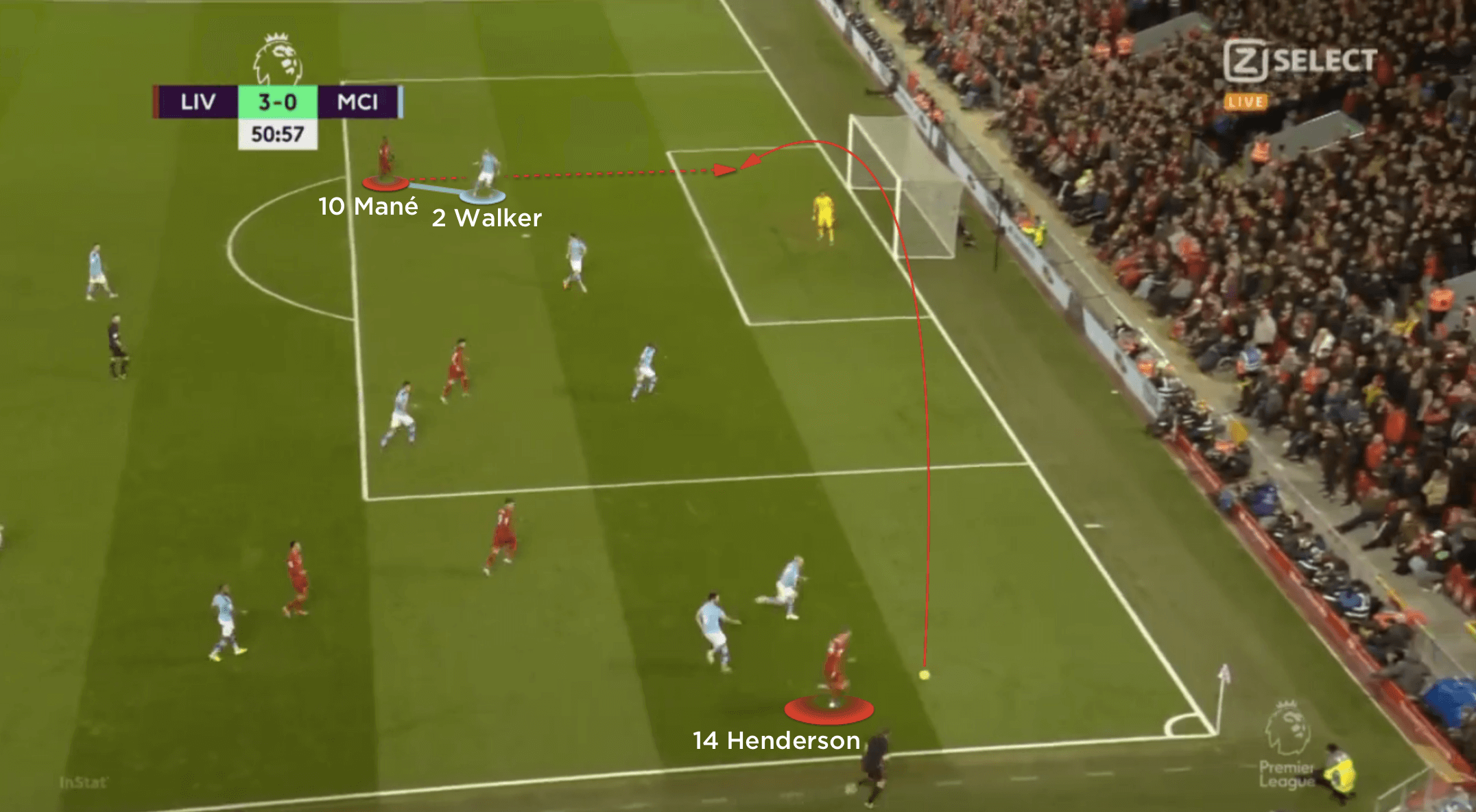 Role at Liverpool
Mané’s positioning, on the inside left of Liverpool’s attack, invites their influential left-back Andy Robertson to advance, and to overlap outside of and beyond him. Complemented by the positioning of Georginio Wijnaldum, operating as their left-sided number eight, he contributes to one of their regular attacking patterns. When he is further forward than the central midfielder closest to him, his runs are tracked by the opposing full-back or central defender, but on the occasions he withdraws from their attack he is followed by opposing midfielders who are often less willing to cover back to in front of goal and less capable of defending, one-on-one.

Even when he is tracked by a full-back, Mané capitalises on the space that is created within defences when that full-back gets drawn from his teammates. From those enhanced spaces between the relevant full-back and central defender, and often using his favoured one-two combinations, an even bigger space is created in the inside left channel for him to advance into. During those passages, the emphasis is then on his teammates’ ability to retain the ball for the necessary time, under pressure, before returning it (below). 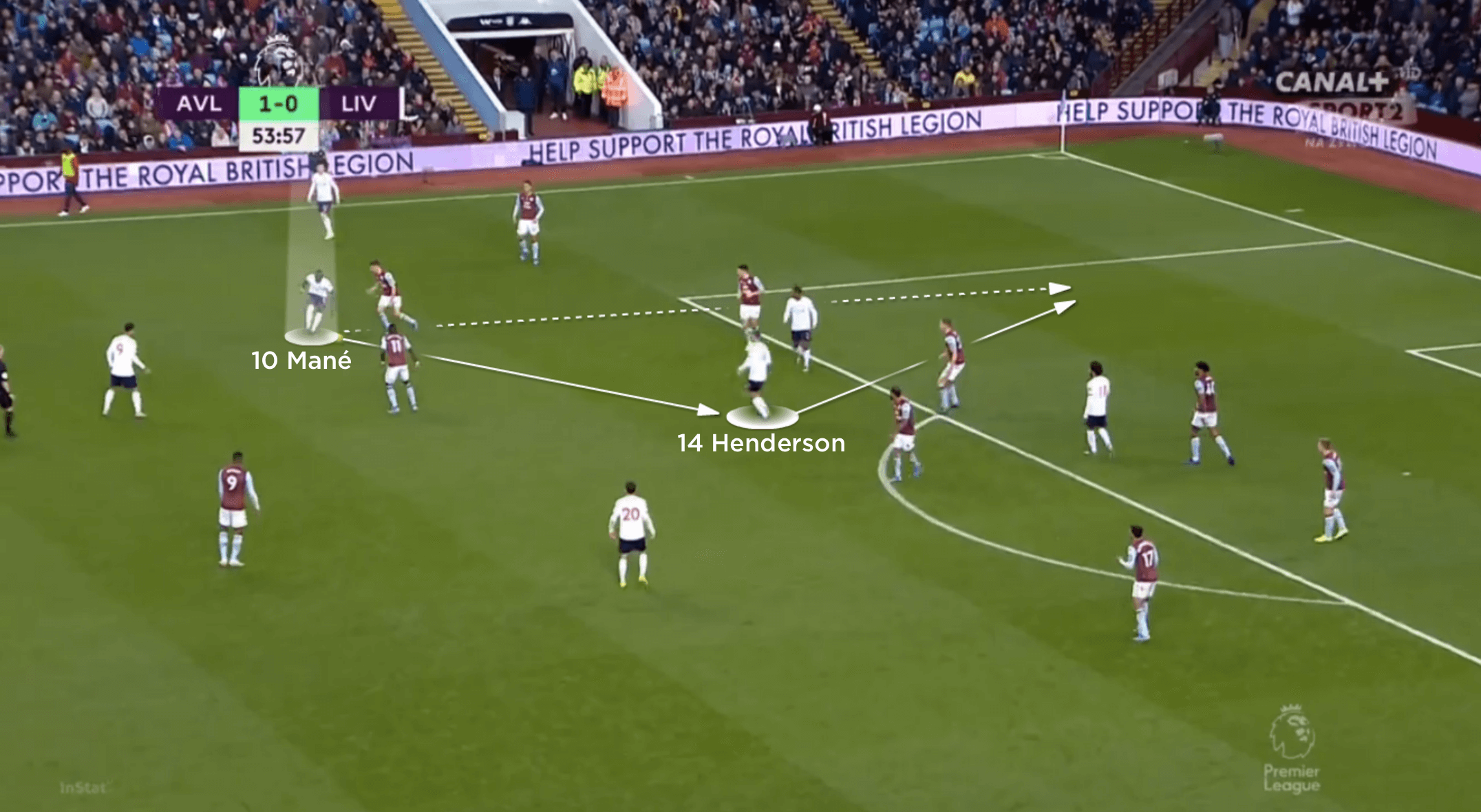 The positioning of Salah and Firmino, often within central defence, also makes it difficult for the opposing central defenders to move, and to cover Mané’s attempts to advance. Few risk defending against Salah, one-on-one, and those that don’t lack the numbers to also double up on the Senegalese.

That Mané is similarly capable of attacking from the right, as he again recently demonstrated against Manchester City, when he snuck beyond Kyle Walker with a run from the left to score with a header, further complicates attempts to defend against him. Firmino’s willingness to drift from his starting role as Liverpool’s number nine strengthens his teammate’s ability to find those spaces to attack – and ultimately highlights perhaps that front three’s greatest weakness. If they are impressively effective together, they are less convincing when one of the three is absent. 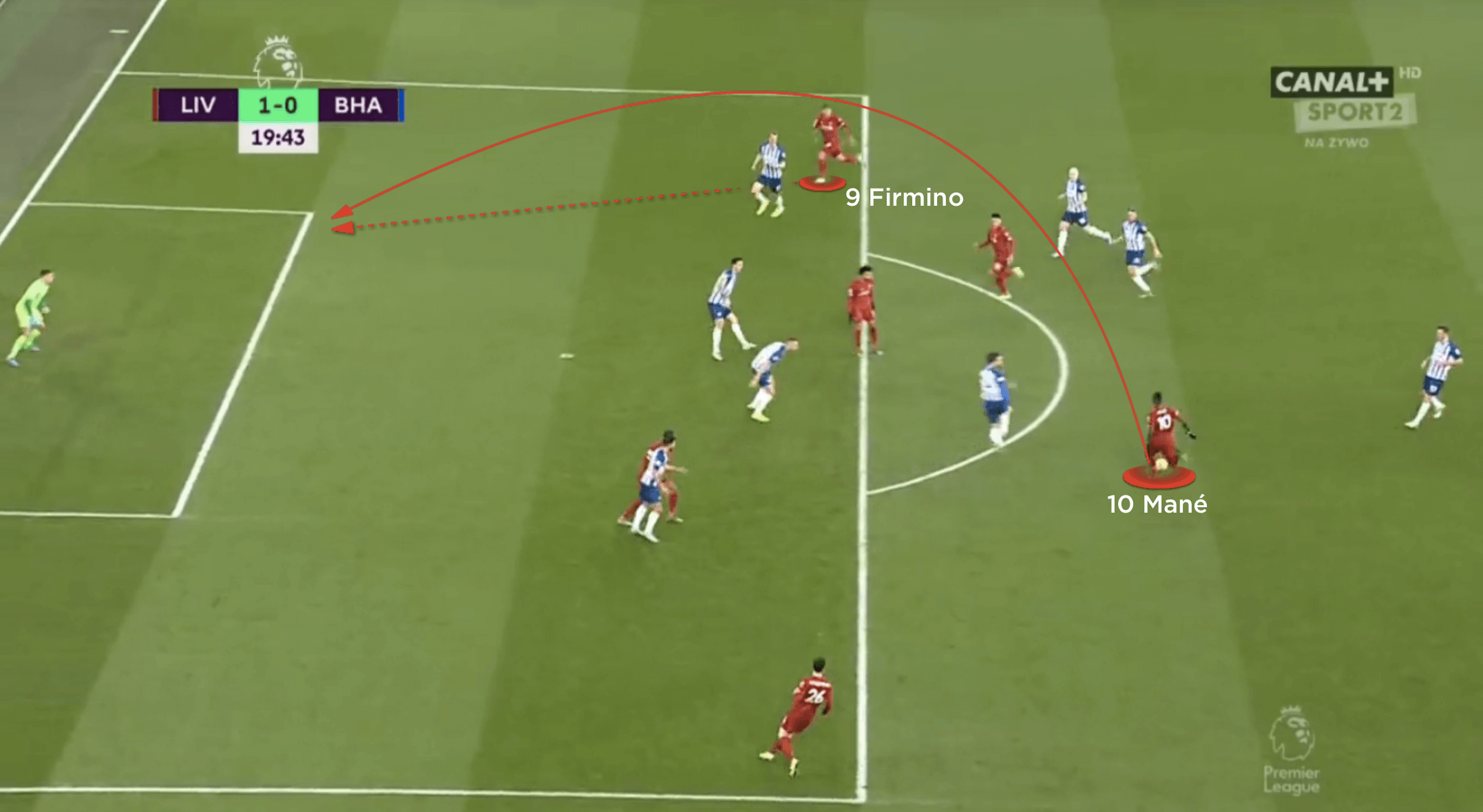 Alex Oxlade-Chamberlain and Naby Keïta are proving increasingly effective as right-sided number eights. When either is selected they offer Mané further options when he is pursuing combinations, particularly from his forward runs within central positions.

Suitable runs from those advancing from attacking midfield positions – whether from a number eight or another teammate – lead to him being more creative. Deft chips over defences (above), or sliced balls through to runners, from the right inside channel, are further strengths. 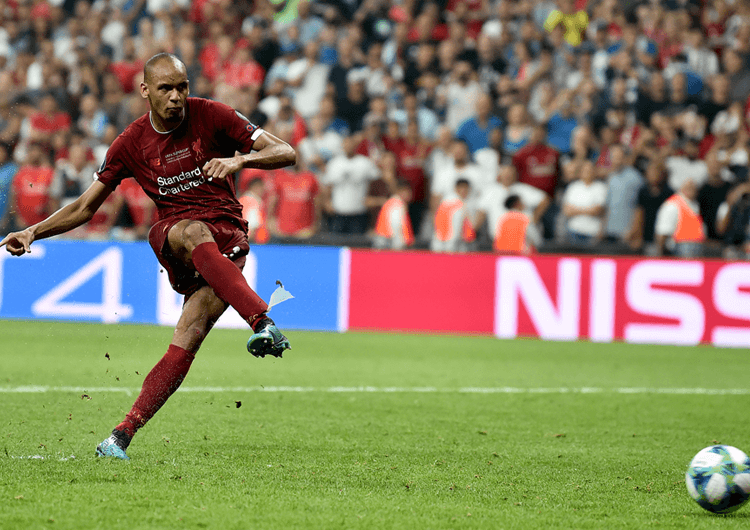 Brazil's Fabinho is expected to be particularly crucial if Liverpool are to follow winning the Champions League with this season's Premier League title, and they will need to overcome Manchester City if they do. Our professional coaches assess what makes the midfielder so important 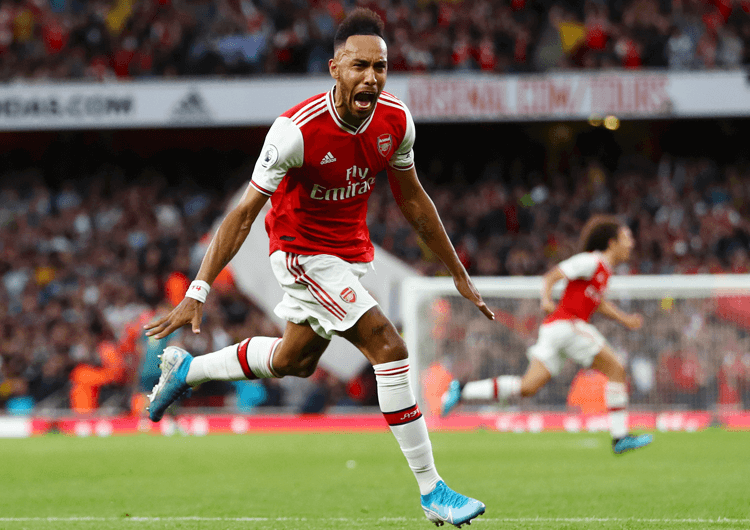 Pierre-Emerick Aubameyang, of Arsenal and Gabon, was rewarded for his fine form by being named the Premier League Player of the Month for September. Here, our professional coaches examine why 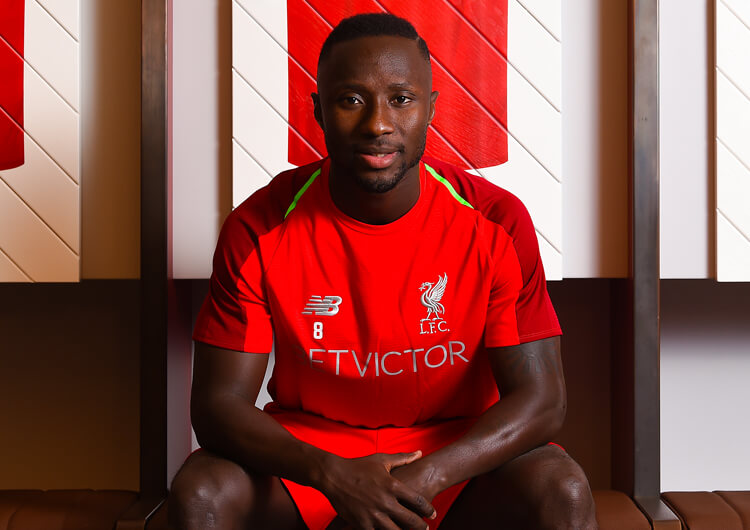 The defensive dynamism of N’Golo Kante but with an attacking edge to match – after his first year in England can Naby Keïta be the final piece in the jigsaw as Jurgen Klopp and Liverpool launch their latest assault on the Premier League?