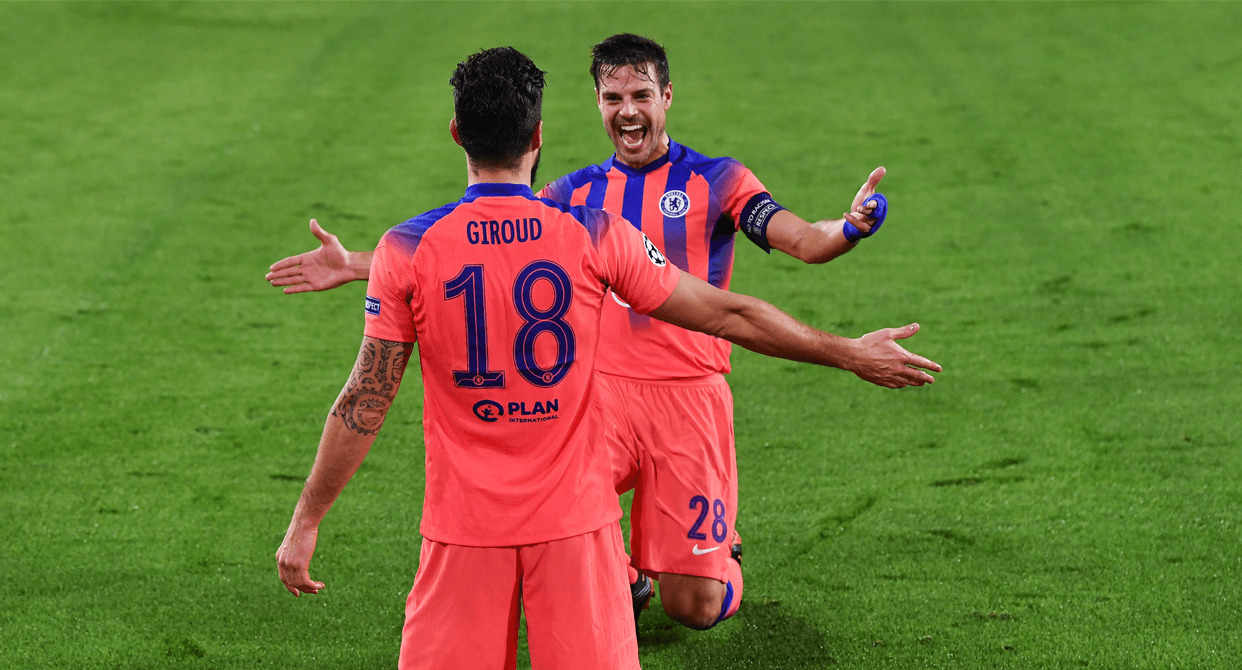 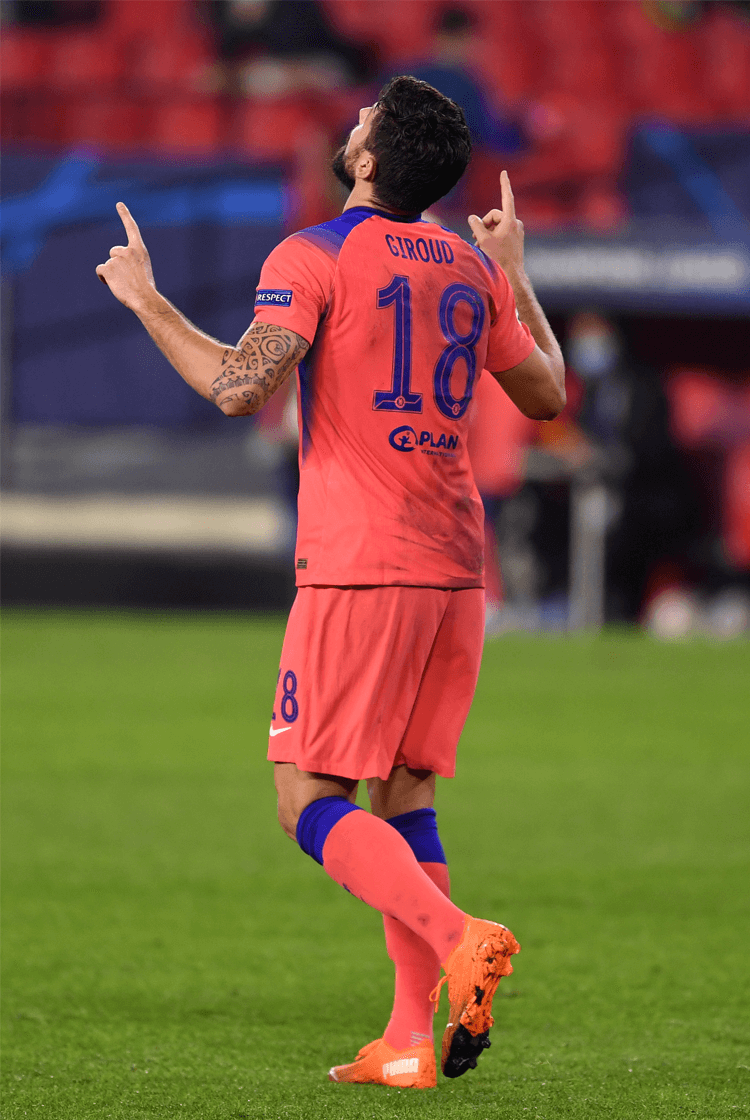 Chelsea secured first place in Group E on an evening when Olivier Giroud scored four goals to defeat Sevilla and deliver one of the finest victories of Frank Lampard's reign as manager. Two composed finishes – one early in each half – were complemented by a header and a penalty, demonstrating their growing strength in depth given the nine changes Lampard had made to the team that drew 0-0 with Tottenham on Sunday. Sevilla's progress to the Champions League's knockout stages is, like Chelsea's, guaranteed. "It was an amazing performance, to score four goals in the Champions League is a fantastic achievement," Lampard said of Giroud. "It was a complete performance and I am delighted for him." "The second goal hurt us a lot," said his opposite number Julen Lopetegui. “We are qualified for the last 16 and we are among the best in Europe. There are many teams that are never going to achieve that.” 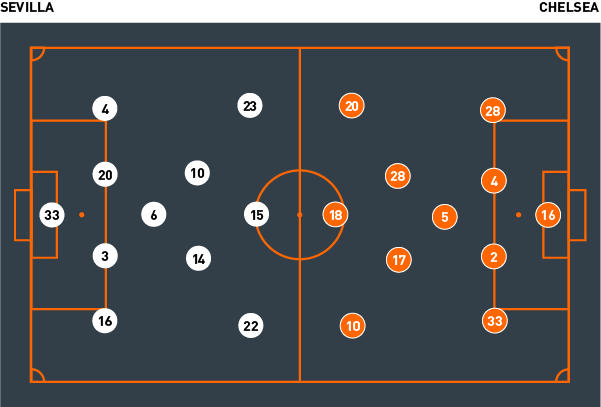 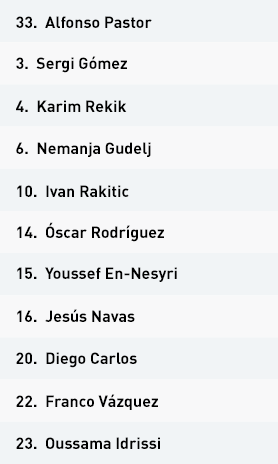 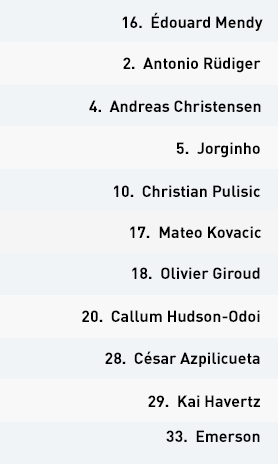 Sevilla were set up by their manager Julen Lopetegui into the same 4-3-3 formation with which they won last season's Europa League. Franco Vázquez, Youssef En-Nesyri and Oussama Idrissi led their front three; against that, Chelsea also defended with a 4-3-3.

The hosts had the greater share of possession, and used it to attempt to find a way through Chelsea's defensive structure, which if not a 4-3-3 also became a 4-1-4-1 mid-block. Olivier Giroud led Chelsea's press by closing down the in-possession central defender, the ballside wide attacker pressed the relevant full-back, and a man-oriented approach was applied in midfield. Chelsea's midfield was both organised and compact, and therefore resistant to Sevilla's efforts.

Ivan Rakitic adopted positions as a false full-back to tempt Callum Hudson-Odoi or Kai Havertz to press him, in turn creating a passing line to Karim Rekik or a space between the lines. Sevilla regardless offered too little movement in midfield, and were reluctant to attempt to play through Chelsea's midfield on the rare, brief occasions they could have done. They instead sought to circulate possession and to play around their visitors' midfield, via longer, horizontal passes to the farside central defender or full-back to advance with.

Chelsea regardless defended those wide areas with intelligence. The relevant wide midfielder engaged, the ballside central midfielder worked to prevent a pass backwards, and Jorginho moved to cover the ballside midfielder. Jorginho's awareness was particularly influential; he moved to cover the spaces behind his teammates, or to a free opponent, undermining Sevilla's potential even if they had succeeded in drawing Havertz and Mateo Kovacic out of position.


The pressure being applied by Chelsea meant that Sevilla's midfielders regularly had little choice but to receive with their backs to goal and with further pressure from behind them; with too little movement ahead of the ball, it was instead again played backwards. Óscar was positioned slightly further forwards in the right half-space during the second half, so that he could be in a position that challenged Kovacic's desire to both monitor him and to preserve the compact shape of Chelsea's midfield.

If Sevilla played with width, Óscar was therefore in an improved position to receive, and one that forced Jorginho to travel further to negate the threat he posed. Óscar, Jesús Navas and Franco Vázquez combined to access the spaces behind Emerson Palmieri, though the crosses that were then played into the penalty area came to little. A further approach involved a lengthier, and more penetrative, switch of play intended to progress beyond the first two lines of Chelsea's structure, but if those switches took them into the final third, quality goalscoring chances continued to elude them.

Lopetegui's team later reorganised to adopt a 3-4-1-2 that featured Joan Jordán as their number 10, behind En-Nesyri and Vázquez. Their wing-backs therefore most regularly became free, contributing to them continuing to play with width.

Chelsea were organised by their manager Frank Lampard into a 4-3-3 formation led by the front three of Callum Hudson-Odoi, Christian Pulisic and Olivier Giroud. Their hosts, Sevilla, defended with a 4-1-4-1 in which Nemanja Gudelj played between defence and midfield and Youssef En-Nesyri was their lone striker.

A press consistent with those applied from a 4-3-3 was used by Sevilla. En-Nesyri closed down the in-possession central defender, Oussama Idrissi and Franco Vázquez prioritised Chelsea's full-backs, and a man-oriented approach existed in midfield. Sevilla's central midfield triangle also inverted to offer one advanced player and two defensive, as is often the case in a mid-block, so that the deep-lying Jorginho could be marked. With Gudelj taking Mateo Kovacic and Óscar instead advancing towards Jorginho, Gudelj had less ground to cover if required to withdraw to his starting position.

Their press was applied when Chelsea attempted to build from defence; a backwards pass also represented the trigger for the hosts to advance and apply that press was increased aggression. If their opponents felt the effects of that pressure, it risked a level of positional indiscipline that freed up opponents, as applied when Jorginho was fed in the build-up to Chelsea's opening goal.


Chelsea played with a faster tempo, with possession, than Sevilla, and also offered more willing forward runners from midfield. Kovacic and Kai Havertz adopted advanced positions between the lines, stretching their opponents by increasing the distance between them and Jorginho and creating further spaces for them to play through. Lampard's team proved capable of penetrating across the pitch, and attacked with numbers into the final third.

The potency of Pulisic and Hudson-Odoi, and the forward runs of César Azpilicueta and Emerson Palmieri, also ensured Chelsea posed a threat when they attacked with width, and sought to play crosses to Olivier Giroud, whose movement was consistently excellent. The striker regularly evaded Sevilla's central defenders by operating on their blindside, and prepared spaces by vacating them shortly before he needed to access them, creating several openings he ultimately took.