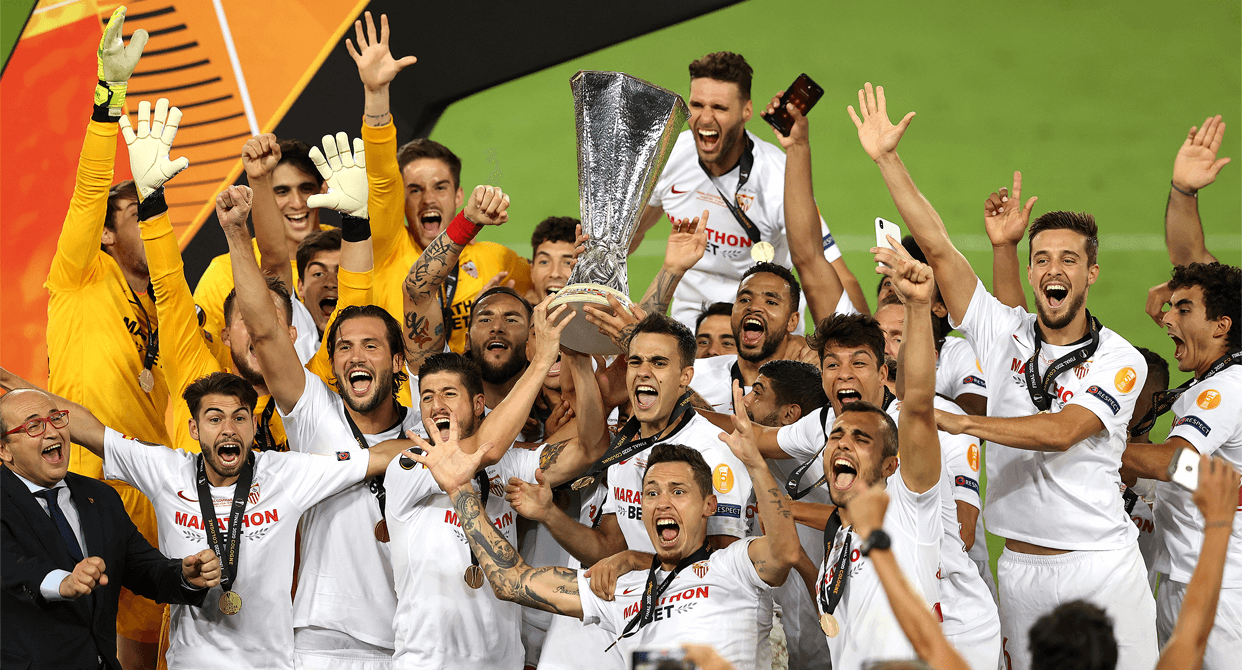 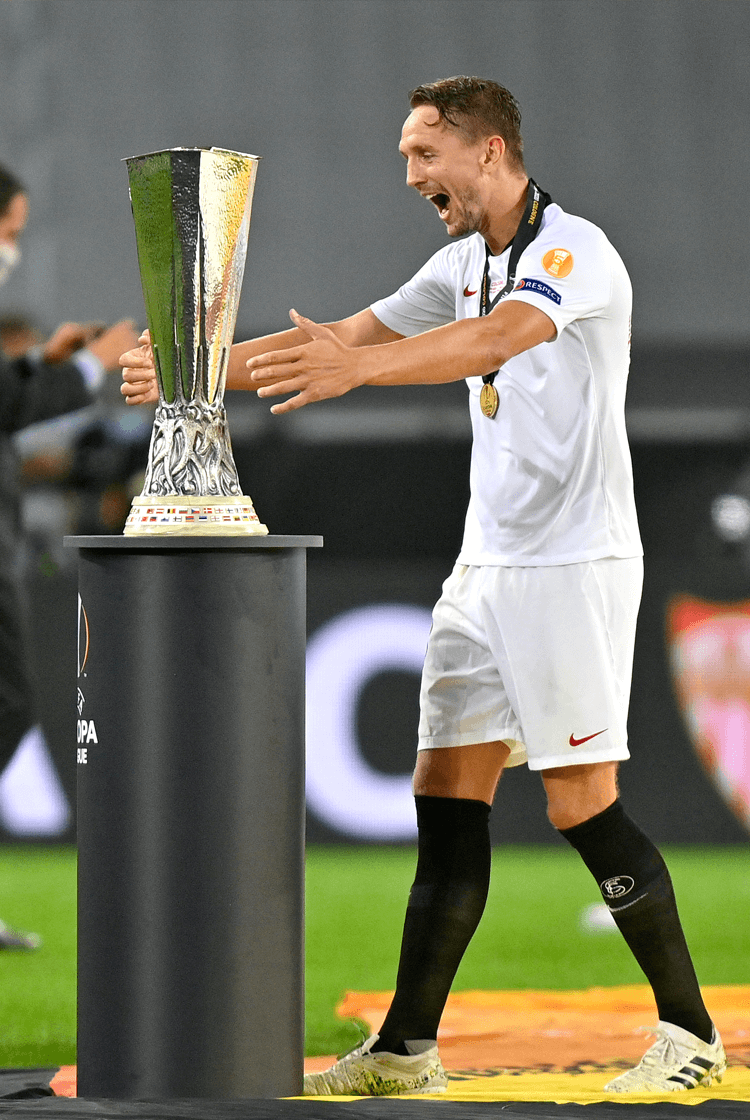 Sevilla won the Europa League for a record sixth time with victory over Inter Milan in Cologne, giving Julen Lopetegui the first trophy of his career in club management. Recovering from a goal down after Romelu Lukaku scored from the penalty spot with his 34th goal of the season, they took the lead through two headers from Luuk de Jong. Diego Godín brought Inter level again by half-time, with a further header, but Lukaku's cruel own goal in the 74th minute sealed Sevilla's latest European success, and extended the unbeaten run that dates back to February to 21 matches. "This is a magnificent club," Lopetegui said. "I hope all the fans can celebrate it but with caution. This squad are great. They believe in it, what they work on and what they transmit. Even if we hadn't won I'd still love these guys, but we take home the prize. We always believed." 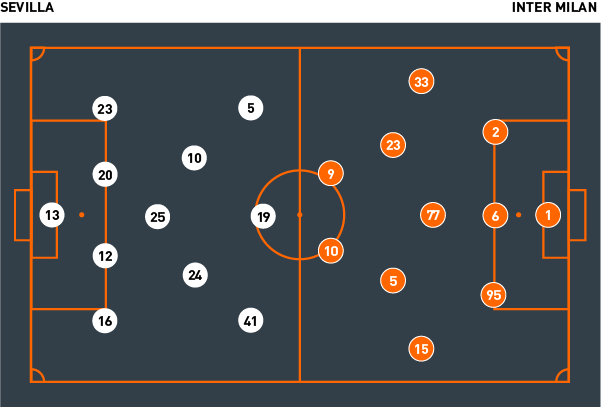 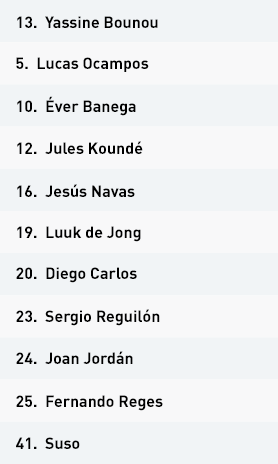 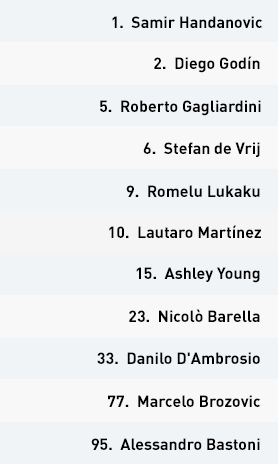 Sevilla retained their manager Julen Lopetegui's favoured 4-3-3 formation, against opponents who defended with a 5-3-2 defensive block. The spaces that existed in the inside channels and wider areas proved most effective with Inter Milan doing so; Jesús Navas and Sergio Reguilón advanced from full-back, but Navas adopted a narrower position behind Suso, who remained outside of Ashley Young. With Inter's three midfielders prioritising Sevilla's, it was passes into Navas that helped Lopetegui's team beyond the first two lines of defensive pressure.

Navas receiving unchallenged through the inside channel meant either an opposing central defender or midfielder moving to press him, creating a space in Inter's defence that was then targeted by a central midfielder and wide forward, contributing to Luuk de Jong heading their first goal. When they built towards the left Reguilón provided their width, and Lucas Ocampo drifted inside, so Éver Banega instead withdrew to alongside their central defenders so that they could build with a back three, and therefore with a three-on-two against Inter's front two of Romelu Lukaku and Lautaro Martínez. Ocampos' movements also invited De Jong to withdraw to provide an aerial target for direct balls when they were under increased pressure.

As the evening progressed, their movements from the right matched those offered towards the left; Navas instead remained wide as Suso attacked infield, but through Inter's central defenders holding their positions the spaces that previously existed behind were covered. It took De Jong's header, from Banega's free-kick, for them to take the lead.


After they had adjusted to defend with a mid-block, Sevilla struggled to offer the same counter-attacking threat. Both wide forwards had deep, narrow positions, and when possession was played directly to De Jong he lacked support against Inter's three central defenders. They were more effective when they built with shorter passes that encouraged their wide players to adopt more potent positions.

Even with Sevilla attempting to build around them, with Inter having reorganised into a 3-4-3, it was Inter who often suceeded in keeping the ball wide and from areas from which Sevilla could cross, negating their greatest threat. They therefore adjusted again, this time through Ocampos moving infield much earlier to operate similarly to a second forward alongside De Jong, denying Inter's central defenders the freedom they required to support the press being applied in front of them. Munir El Haddadi later replaced Ocampos, and performed a similar role.

It was from another set-piece that they regained the lead, when Diego Carlos' acrobatic effort from a set-piece deflected in off of Lukaku's leg. They thereafter preserved that lead by expertly protecting the territory between the lines.

Inter Milan were organised by their manager Antonio Conte into his favoured 3-5-2 formation. They encountered opponents applying a high press from a 4-3-3.

In response to that press, Nicolò Barella moved into the right inside channel, ahead of the midfield pivot provided by Marcelo Brozovic and Roberto Gagliardini, and Romelu Lukaku and Lautaro Martínez offered direct options in the final third for Inter's defenders to target. Their layoffs, to the wide moving Barella, contributed to them playing through Sevilla’s higher pressure.

After they took the lead from Lukaku's penalty, secured following a break from Sevilla's attacking free-kick, Brozovic's awareness in the central lane mean that they contributed to progress into their opponents' half, even when they committed additional players to their press. When he withdrew into a deeper position he increasingly instead formed a double pivot with Stefan de Vrij, and Inter created wider boxes between the relevant wing-back, wider central defender, central midfielder and midfield pivot.

The width Ashley Young and Danilo D'Ambrosio provided also increased the distance their opponents had to cover to apply that press, giving Inter increased success, through those boxes, against that press before they then switched play to the far-side wing-back, who in turn drove forwards and progressed beyond midfield. Their success contributed to Sevilla adjusting to instead adopt a mid-block, Éver Banega advancing to towards Brozovic, and later their wingers adopting narrower position to help Joan Jordán and Fernando protect the central areas of the pitch. With that final adjustment they started to frustrate Inter.


Inter therefore responded by instead prioritising the inside channels and wider spaces; crosses delivered by Barella and Gagliardini tested Sevilla's central defenders. Even with their opponents briefly leading through Luuk de Jong's second goal, Inter immediately responded when Diego Godín brought them level.

Amid the reduction in the pressure Sevilla were attempting to apply, Barella and Gagliardini, like the wider central defenders behind them, adopted more advanced positions to support D'Ambrosio and Young, ultimately increasing the support offered to Lukaku and Martínez. Only the poor execution of their final ball – direct or otherwise – undermined their increased grasp of possession.

Owing to that, they struggled to advance through Sevilla's deepening block. Christian Eriksen and Alexis Sánchez were introduced to support Lukaku from between the lines, as number 10s, but they continued to struggle to create.