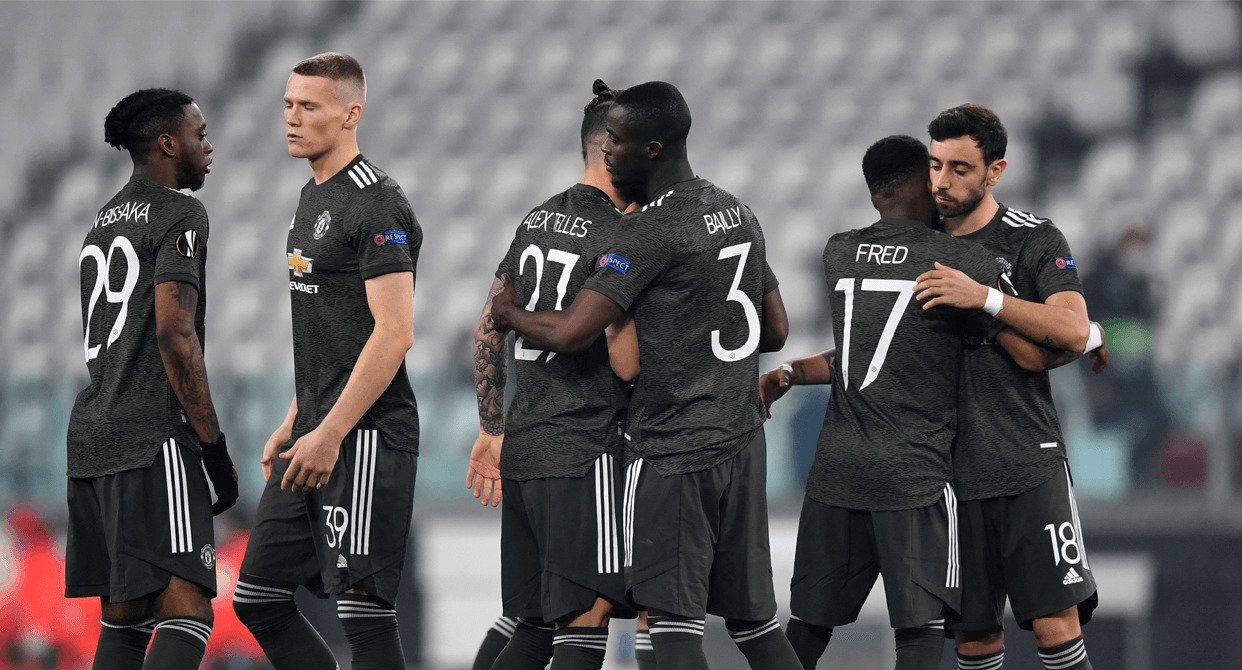 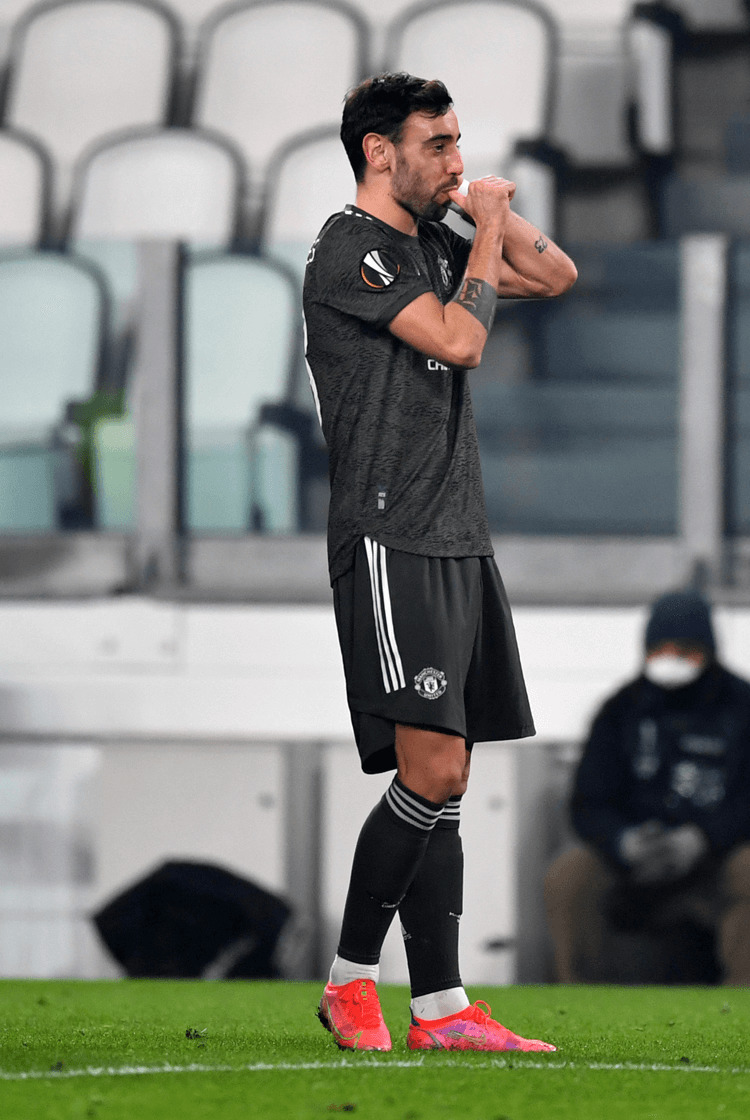 Manchester United will take a four-goal advantage into the second leg of their round of 32 Europa League encounter with Real Sociedad after so convincingly winning in Turin. The influential Bruno Fernandes' first-half goal was complemented by his second in the second half, and further finishes from Marcus Rashford and the improving Daniel James. After losing to Sevilla at the competition's semi-final stage last season and the disappointment of elimination from the Champions League, Ole Gunnar Solskjaer's team is among the favourites for a trophy success that could yet define his time as their manager. "We got nothing out of getting to the semi-final last year," he said. "Sometimes you can say it isn't worth it but the experience has helped this team. We have to learn on the job. The only way to learn from your mistakes is to correct them. The semi-final defeat last season is in the back of our heads and hurts. We felt we should have gone all the way." His opposite number, Imanol Alguacil, said: "There’s no doubt it’s a difficult and painful result. But we wanted to be faithful to our style, no matter who we had in front of us. We knew we could suffer in behind because of their fast forwards." 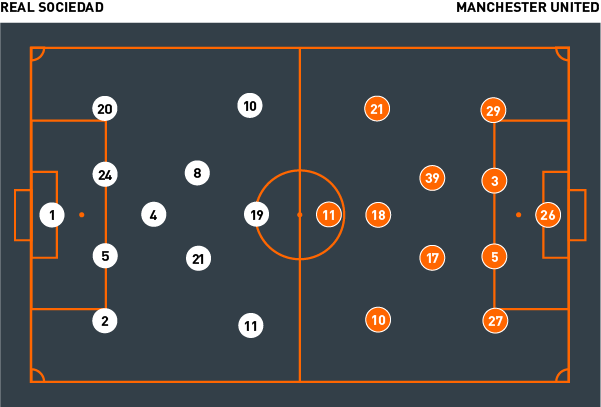 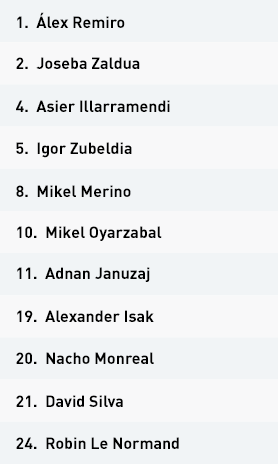 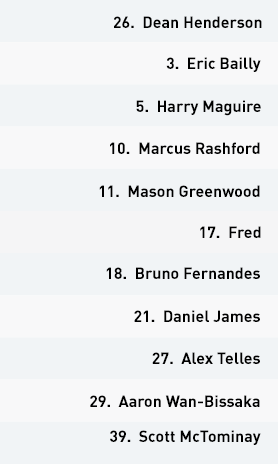 Real Sociedad were set up by their manager Imanol Alguacil into a 4-3-3 formation in which Adnan Januzaj, once of Manchester United, featured towards the right of their front three. United defended with a 4-2-3-1, and their attacking players willingly retreated to contribute as they defended, and adopted a narrow shape while working to cut passing lanes as their opponents sought to build possession.

During the early periods the hosts struggled to retain the ball, so they attempted to patiently build from defence, often via Asier Illarramendi withdrawing into central defence to create the option of combining with Mikel Merino and David Silva, featuring in front of him in central midfield. Merino created passing lines between them, and a shape was adopted with the intention of transitioning forwards into the space behind United's press, but the double pivot formed by Fred and Scott McTominay and the angles they created also encouraged Socieded to play the ball wide, and made United difficult to play through.

Nacho Monreal regularly attempted to attack from left-back and to support in the final third, where he often moved ahead of Mikel Oyarzabal, who in turn withdrew into deeper territory to create two-on-ones against Aaron Wan-Bissaka, whose early yellow card meant the areas around him were increasingly targeted. On the opposite wing Januzaj took increasingly high and wide positions, occupying Alex Telles and making it difficult for him to scan for both the ball and his opponent.


Sociedad regardless found it challenging to break United's defensive lines with penetrative passes. Silva's footwork meant him driving forwards through the centre of the pitch and attempting to progress through the low block with which he was confronted, and his movements created space for his teammates, but the compactness and consistency among United's defenders meant that their attempts to create were repeatedly negated.

A change was evident towards the start of the second half, when Sociedad attempted to combine through the middle via Merino's creativity amid pressure behind him from McTominay, Silva moving deeper to take the ball, and Monreal consistently advancing, though at the risk of leaving them with a potentially vulnerable back three. As United's lead increased Sociedad adopted a more offensive shape as they built possession; their central defenders remained withdrawn to support around their goalkeeper, but their full-backs advanced to create a line of four with Merino and Illarramendi.

Against that, Daniel James moved into deeper positions to support in midfield, and when the hosts succeeded in securing the ball for lengthier periods United adopted a mid-block that featured numbers behind the ball and in the central areas of the pitch. Even at 3-0 up, with United essentially inviting Sociedad to send players forwards so that they could attack into the spaces being vacated, the hosts struggled to continue to make an impression on United's defence.

Manchester United were organised by their manager Ole Gunnar Solskjaer into a 4-2-3-1 formation led by Mason Greenwood. He had selected an attack-minded XI that was dynamic with the ball. Real Sociedad defended with a 4-5-1, and often a high line – via Adnan Januzaj and Mikel Oyarzabal withdrawing into midfield – challenging United to find space between the lines.

From very early United were determined to use their speed to capitalise on the spaces that existed behind their opponents' defence. Greenwood and Marcus Rashford changed positions and, complemented by balls played in behind, regularly succeeded in turning their opponents' body position.

Scott McTominay and Fred formed the double pivot at the base of midfield, and Alex Telles and Aaron Wan-Bissaka advanced from full-back to create two-on-ones with Rashford and Daniel James, restricting Sociedad to attempt to delay their attacks through the wide channels. When possession was being built in midfield, Rashford sought to adopt the most advanced possible position and to time his forwards runs in behind Sociedad's defence.

Fast attacking transitions were also significant, and numbers were committed forwards before Sociedad could adopt their defensive positions – Rashford and Telles often drew their back four towards them, creating space towards the right. It was then a change of pace and a run to between a central defender and full-back from Bruno Fernandes that presented him with the opportunity from which he gave United the lead.


During the second half their lead was doubled after a counter started by Fred. They transitioned into an attack that created a four-on-four in which Rashford, James, Greenwood and Fernandes succeeded in combining in a way that Sociedad couldn't delay them.

Their attempts to counter continued –  James continued to offer a high and wide position when United took possession into midfield – and a combination of well-timed runs, penetrative passing and clinical finishing made them very difficult to stop. Harry Maguire increasingly occupied more advanced positions, contributing to their numerical advantages in midfield, and Anthony Martial's introduction as a substitute meant Greenwood moving wide.

James scored United's fourth when taking advantage of Nacho Monreal's advanced starting position. After receiving possession in a deep area he succeeded in accelerating into space, and providing the finishing touch.