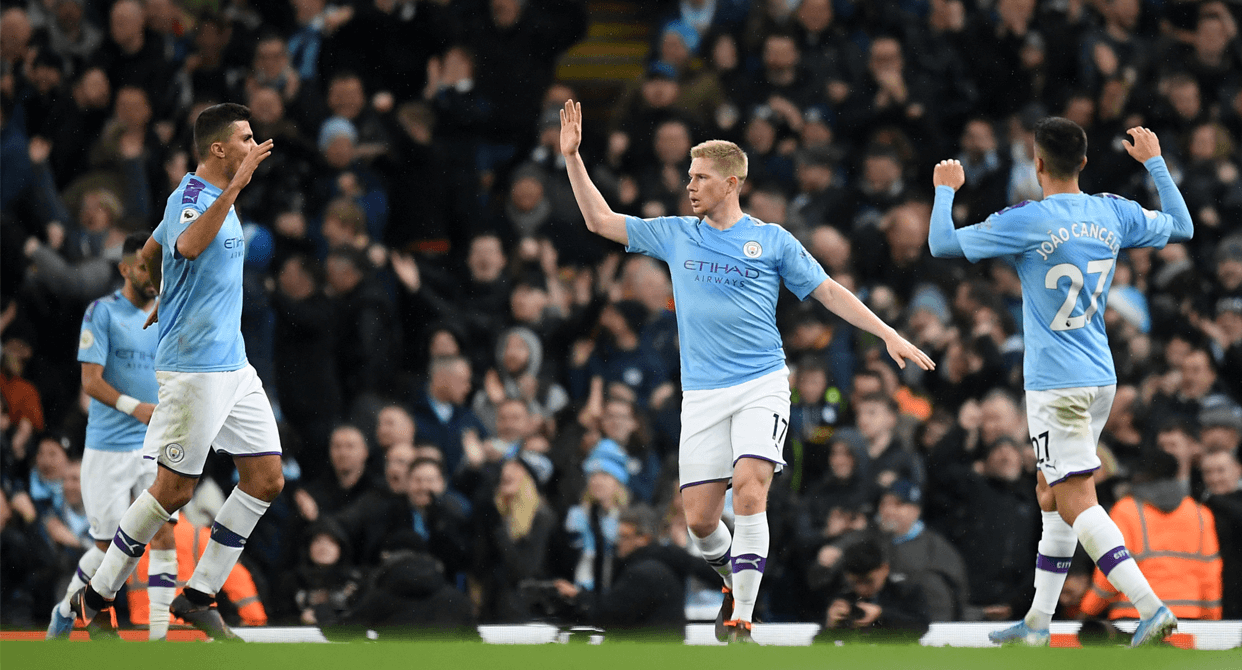 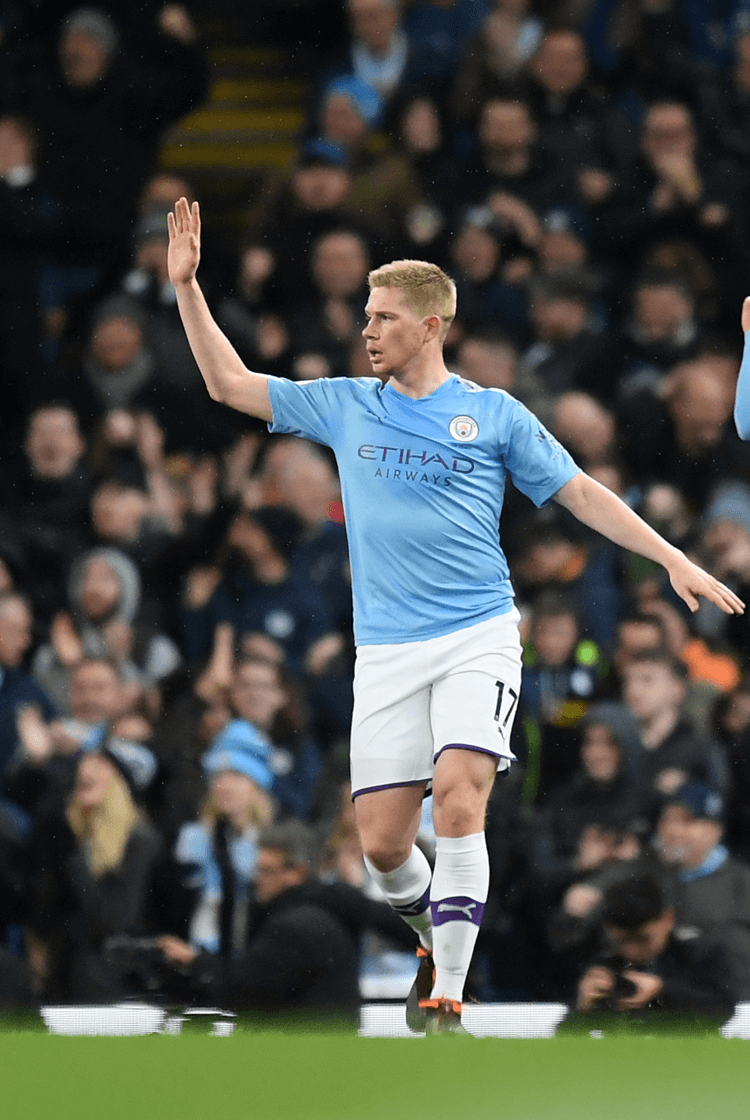 Manchester City maintained their pursuit of first-placed Liverpool after overcoming in-form Chelsea, just hours after Roberto Firmino's late winning goal gave the Premier League leaders three points at Crystal Palace. With Manchester United and Sheffield United playing out an entertaining draw, Burnley winning at Watford and Everton losing at home to Norwich, the professional coaches at the The Coaches’ Voice have analysed the tactics involved in each outcome.

Tammy Abraham largely occupied City's central defenders, inviting Kanté to advance towards a reactionary defence that also required Riyad Mahrez to withdraw from midfield to offer support when Chelsea left-back Emerson Palmieri attacked. That ambition in possession was consistent, and contributed to them taking the lead, but represented a significant risk against such proven opposition.

Kanté spending so long further forward meant that their defence was offered little cover, particularly in central areas, which could be seen in the superior quality of City's goalscoring chances. The quality of Kevin De Bruyne's final ball and attempts on goal, as he succeeded against Chelsea's double pivot, encouraged his teammates, and from his preferred, right inside channel, he combined with Mahrez and Sergio Agüero to attack between and around the left side of Chelsea's defence. Both of their goals owed to the lack of cover the visitors had in central midfield.

Crystal Palace 1-2 Liverpool
If a concern for Liverpool is that they again did not keep a clean sheet, they were fortunate that in Crystal Palace they encountered opponents who lacked an attacking edge. Wilfried Zaha and Andros Townsend continue to pose a threat while carrying possession in wider areas, but the visitors doubled up on them where possible, even at the risk of their ability to attack during transitions through Sadio Mané and Alex Oxlade-Chamberlain.

Jordan Ayew was therefore forced to move across to support and combine with Zaha and Townsend (above), but that in turn created a space in central areas that Liverpool's central midfielders could attack. Roy Hodgson had demanded a compact, defensive block that undermined the visitors' options when in possession, but that also restricted Palace's potential to attack.

Jeffrey Schlupp and Christian Benteke were introduced for the second half and their presence, combined with greater ambition from Palace's full-backs, increased the hosts' attacking threat. Their equalising goal came through Benteke and Zaha; only Liverpool's desire and tenacity ensured that they again secured another three points.

Everton 0-2 Norwich
Visitors Norwich were strengthened by both the return of Christoph Zimmerman to the centre of their defence, and the attacking potential offered by midfielders Todd Cantwell and Onel Hernández. Both teams adopted a 4-2-3-1, but whereas Everton's was rigid, Norwich's was fluid, and therefore far more potent.

Their full-backs Max Aarons and Sam Byram provided width, and the double pivot formed by Tom Trybull and Alexander Tettey, who had previously deputised for Zimerman in central defence, protected against transitional attacks from Everton. Wider, attacking midfielders Hernández and Cantwell supported Aarons and number 10 Kenny McLean (above), and the combinations they created regularly progressed beyond Everton's double pivot and the left side of their defence. Their striker Teemu Pukki remained advanced, from where his link play was also influential.

During the second half they played an increased number of penetrative passes into Pukki, from deeper starting positions. Cantwell provided supporting runs from central areas, and McLean drifted wide, to occupy Everton's full-backs. These runs often went untracked; Norwich too often eased through Everton's lines, and Pukki continued to link, and to protect possession.

Watford 0-3 Burnley
The superior physicality offered by Burnley meant them scoring three times from set-pieces, despite them having not won away from home since April and otherwise creating very little. Watford's 3-5-2 initially succeeded in working through Burnley's mid-block, often forcing one of the visitors' two strikers to withdraw to negate the numerical advantage Quique Sánchez Flores' team had in central midfield, but they took often lacked the finishing touch.

Watford's combinations in central midfield, where they often had an overload against Jack Cork and Ashley Westwood, also succeeded in the second half. It was when they reached the penalty area, where Burnley's wide midfielders had withdrawn to, that they were again frustrated. There was a lack of speed and penetration and, until Troy Deeney's introduction, an aerial threat.

On the rare occasions the space existed to create a shooting opportunity, amid Burnley's particularly low block, their poor decision-making was costly. They are certain to suffer relegation unless that attack improves.

Sheffield United 3-3 Manchester United
Ole Gunnar Solskjær organised Manchester United into a 3-4-3, partly because of the attacking threat posed by the hosts' overlapping central defenders, but their central midfielders Fred and Andreas Pereira therefore faced a numerical disadvantage (below). They struggled to connect with their front three, whose movements during the first half were also poor, and against the intensity, aggression and quality of Sheffield United's central midfield of John Fleck, John Lundstram and Oliver Norwood.

Scott McTominay's absence was therefore particularly influential, and that advantage in midfield was complemented by strikers David McGoldrick and Lys Mousset performing so convincingly against the visitors' three central defenders. Of the three, Phil Jones most struggled.

With them using a 4-3-3 for the second half, Chris Wilder's team were less effective in attack, and Manchester United's quality gradually told. Their increased passing options encouraged them to penetrate beyond the hosts' midfield, and their attacking numbers occupied their opposing defenders. The movement of substitute Jesse Lingard, and Harry Maguire advancing into midfield, also made them more potent in the final third, where a sudden cutting edge ensured that they briefly led.