Profile
Norwich’s once little-known Teemu Pukki has adjusted impressively to the Premier League, having inspired them to promotion as the Championship’s top goalscorer with 29 goals last season. Perhaps the outstanding candidate on an August list that also featured Sergio Agüero, Kevin De Bruyne, Raheem Sterling, Ashley Barnes and Roberto Firmino, he became only the third Finn to win the Premier League’s player of the month award.

If Mikael Forsell and Sami Hyypia stopped him being the first, neither recorded five goals in their first four Premier League appearances – which included finishes against Liverpool and Chelsea, and a hat-trick against Newcastle. A promising start to 2019/20 has suggested Daniel Farke’s Norwich are capable of securing survival. If they are to do so, their leading striker – signed for free from Brondby in the summer of 2018 – will be key.

Tactical analysis
As the lone striker in Farke’s 4-2-3-1 formation, the 29-year-old Pukki’s first responsibility is to provide penetrative movements to attack any spaces in behind an opposing defence. His ability to remain onside and curve his movements along those defensive lines is as effective as his direct runs beyond them, which exploit any disorganisation within those defences.

Some players are only comfortable on one side, which can restrict options if they are used as the lone striker. Not so Pukki, whose fluid movements make him capable of attacking different spaces within a back lin, where he prioritises penetrating between the central defender and full-back. By curving his run from out to in (below), he latches on to through balls while moving towards goal; he is similarly capable of running between the two central defenders as he moves blindside of the nearest defender, though this can also involve him moving into inside channels beyond pressure, instead of maintaining a more central position.

That his timing is so impressive can compensate for the fact he is short the type of pace that can make the difference at the level he is competing. He delays runs to match the timing of the release, gaining an advantage over defenders who are often yet to turn towards goal. Once in the penalty area, as we have seen, he possesses the composure to provide the finishing touch. Pukki rarely rushes shooting, preferring an element of disguise when striking; he often reverses shots across his body to tempt goalkeepers to dive in the wrong direction, while also attempting to hide the power and height of those shots. There is also minimal backlift to his shot; he can generate impressive power from a short swing. 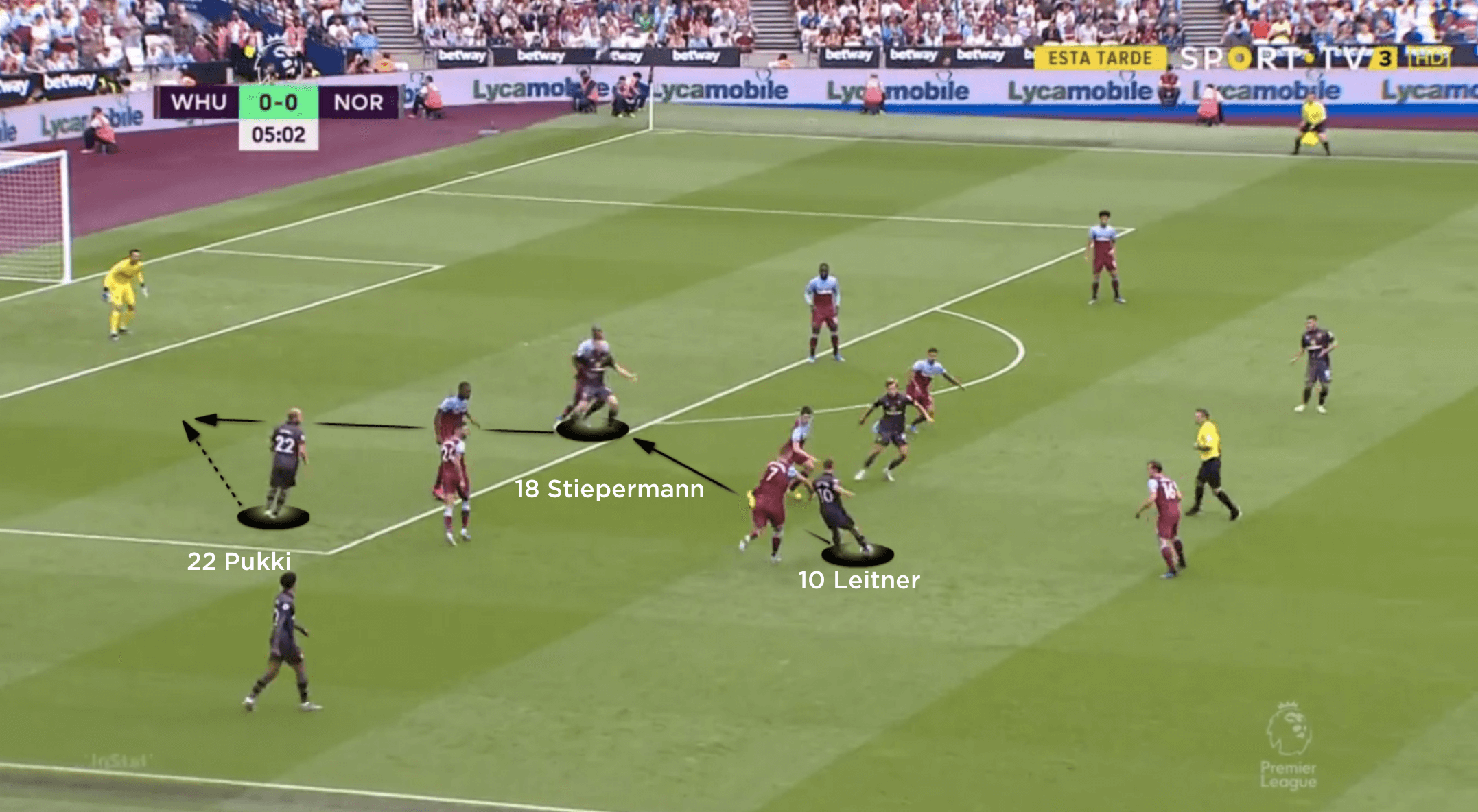 The speed between the Finn’s first and second touches means he can take advantage of goalkeepers moving into a set position, similarly to on the rarer occasions he links play in central areas. He withdraws to combine with runners in front of opposing defences, where his changes of tempo when controlling possession under pressure draw opponents, creating spaces in more advanced positions.

Role at Norwich
Much of the impression Pukki has so far made on the Premier League owes to the support provided by the three attacking midfielders selected in the line of three behind him – Emi Buendía, Todd Cantwell and Marco Stiepermann, all of whom also played their part in Norwich’s promotion.

Buendía is largely used from the right, but with Norwich’s full-backs advancing so far forward he operates from a narrower position within the right inside channel. From there, the angle for balls in behind towards Pukki’s forward runs encourage him to penetrate in central areas (below); the diagonal pass in behind moves him from out to in, where his first touch can be between or beyond opposing central defenders. 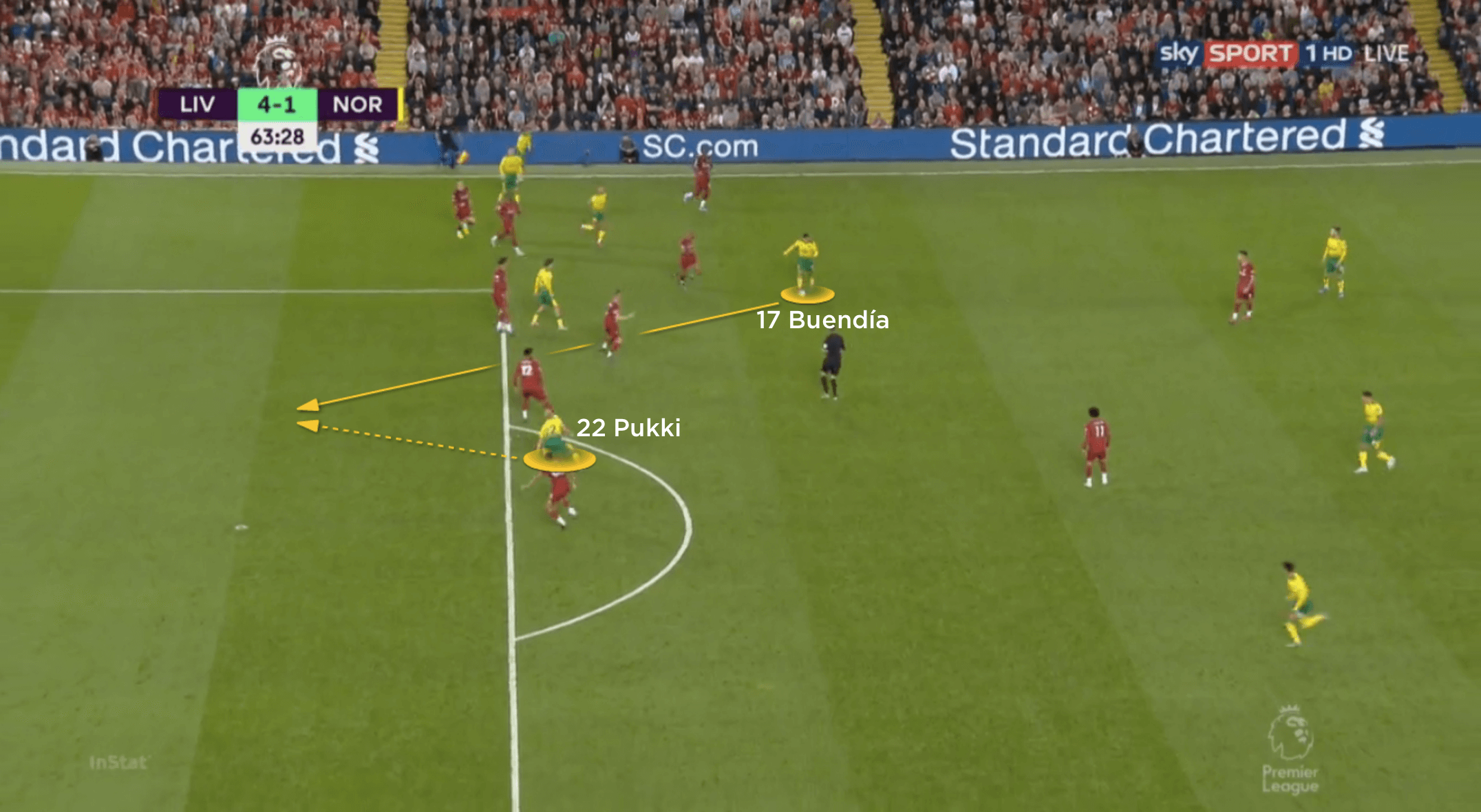 When Buendía moves into this inside position, whipped lower crosses create further goalscoring chances. His support behind draws opposition defenders – backwards passes are often triggers for defences to advance – while runs in the opposite direction from Pukki, timed with first-time crosses, also create chances.

Todd Cantwell starts on the left, and when Norwich’s left-back advances he provides penetrative movements in behind, drawing defenders from Pukki. He is also more mobile than Buendía and Stiepermann, and so receives in both central areas and even on the right. The three often play close together to combine (below) and feed Pukki, who will remain in an advanced position. 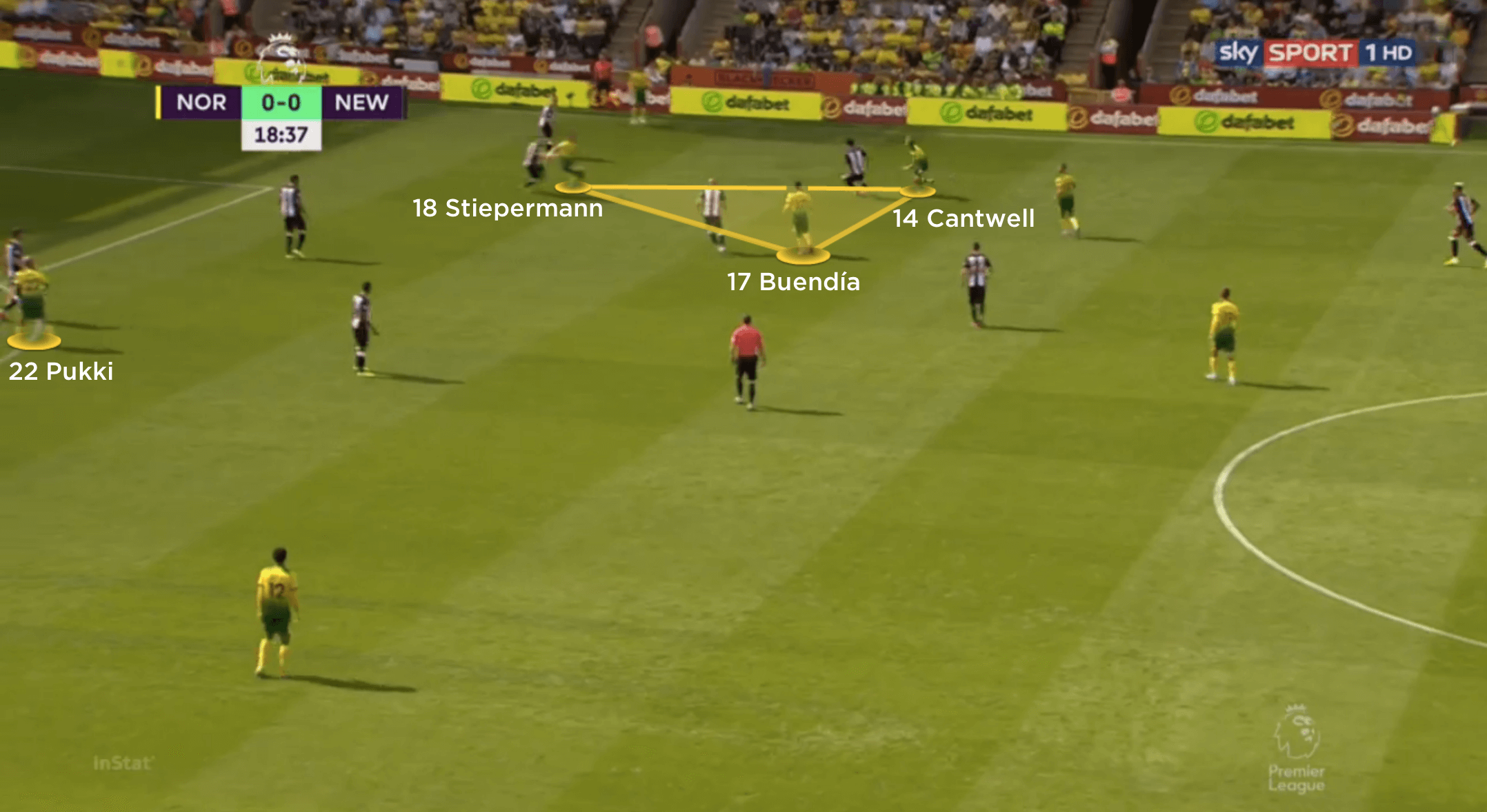 The final member of the trio is Stiepermann, who as the central number 10 supports from just behind Pukki. He is not as creative, agile or fluid as Cantwell and Buendía, but his ability to require few touches encourages the striker’s movements. He links quickly from central positions – from more withdrawn teammates and into Pukki – with intelligent play between the lines, and his physicality means he can occupy defenders, giving Pukki the freedom to advance and receive possession to feet. 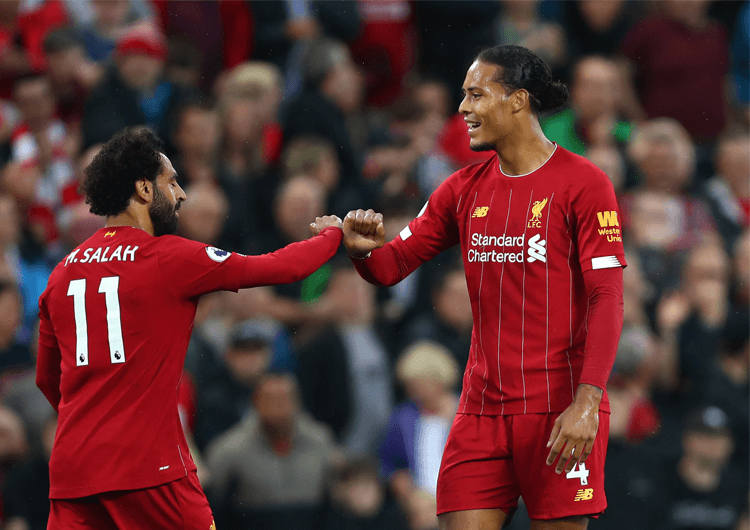 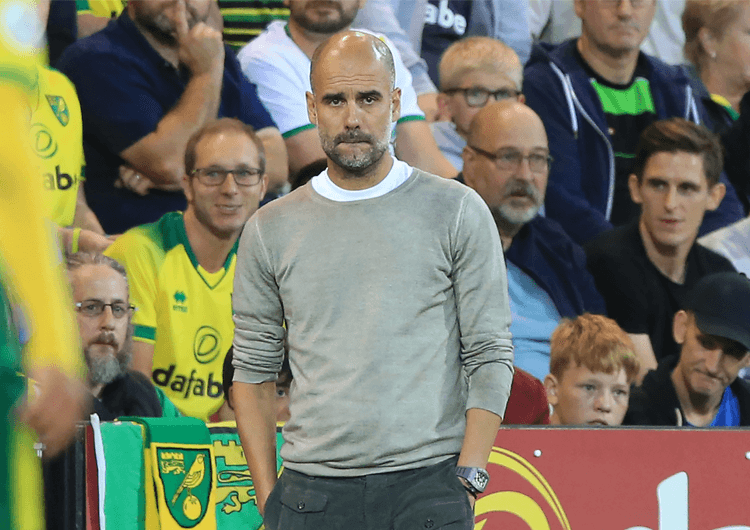 Pep Guardiola's Manchester City fell five points behind Liverpool in the race for the Premier League title when they suffered a shock 3-2 defeat to Norwich City. We analyse what went wrong for the defending champions, and how Daniel Farke's team overcame then 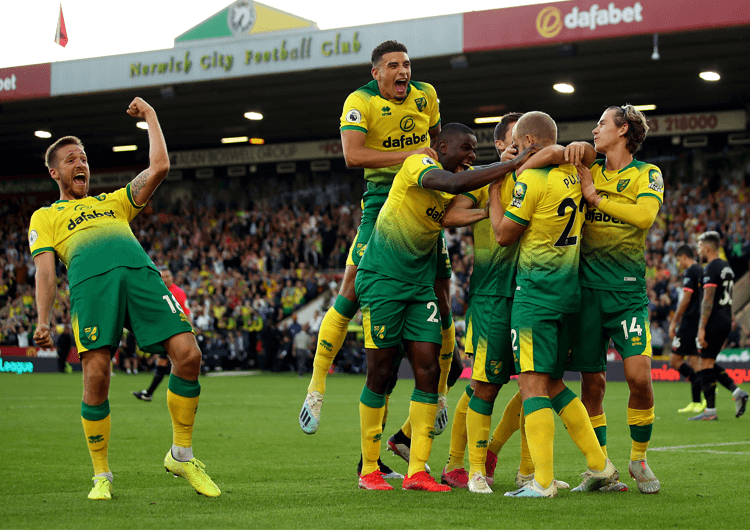