Profile
If Arsenal are to return to the top four this season, they will do so because of the influence of Pierre-Emerick Aubameyang. It is perhaps only the fact that they are not widely considered contenders for the Premier League title, and are not competing in the Champions League, that means he is not even more widely considered one of the finest attackers in the world.

Whether playing, unusually in the modern era, as one of two strikers alongside the similarly prolific Alexandre Lacazette, or through the middle or from the left of a front three, Aubameyang’s eight goals in 10 appearances so far in 2019/20 demonstrate he is perhaps at the peak of his powers and is as potent in the final third as domestic rivals Sergio Agüero, Harry Kane, Mo Salah and more.

That six of those came in five appearances no doubt contributed to him being named September’s player of the month, after Norwich’s Teemu Pukki had been August’s winner, and his team remaining unbeaten throughout. Trent Alexander-Arnold, Kevin De Bruyne, Riyad Mahrez, John McGinn, Ricardo Pereira, Son Heung-min and Callum Wilson, incidentally, completed the eight-strong shortlist for the award – one Aubameyang also won in October 2018.

Tactical analysis
Aubameyang has shown his fluidity and a variety of movements when attacking the penalty area (below) throughout his career. His acceleration, particularly from a standing start, is a significant strength; his bursts through gaps, or into large spaces, often trigger teammates to release possession forwards, when his awareness and timing to adjust the speed of his movement is of the highest quality.

That versatility has become essential for Arsenal. Unai Emery has used him as a central striker, and from both the left and right, partly because of his ability to create shooting opportunities. If the two-footed Aubameyang knows when to shoot early, he is also as capable of sliding finishes under a goalkeeper as he is of deftly touching or chipping around or over him, and of shooting with power from outside the penalty area. 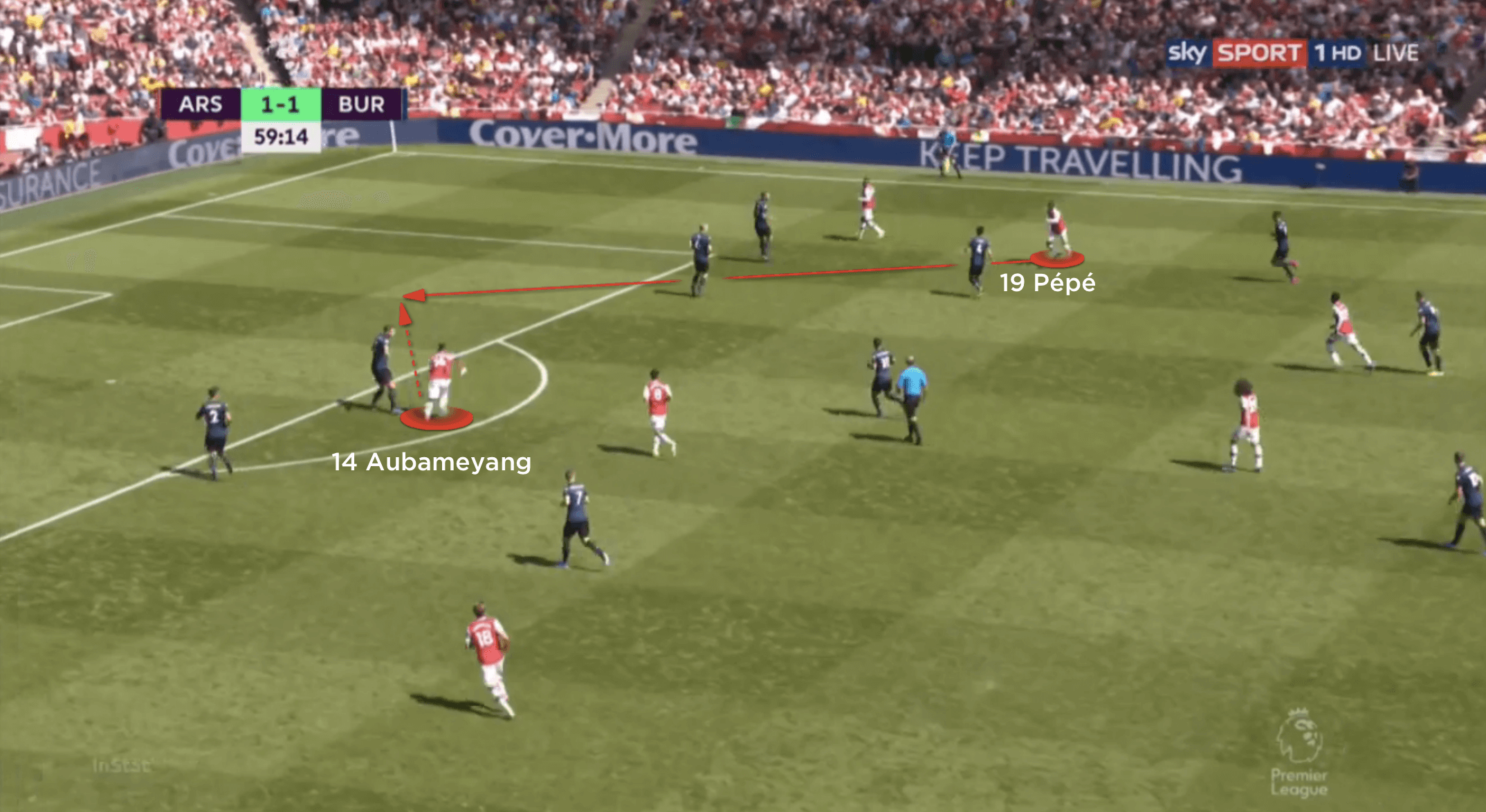 Given most goals are scored within one or two touches, when an attacker is surrounded by multiple defenders and with a lack of space their finest chance of scoring has usually passed. Aubameyang can roll possession from one foot to the other to create a further opportunity (below), and is therefore effective on both sides and from different angles.

Those angles trouble opposing defenders attempting to track or mark him, not least because his explosive pace is so difficult to match that they attempt to create a head start by anticipating his movements, and can then be deceived by him moving blindside and around them or across and in front of a marker. That he is as capable as the world’s finest, in that context, perhaps also highlights the weakness that means the rest of his game can potentially be undermined.

When he attempts to play with his back to goal Aubameyang is less capable of securing possession in the final third, regardless of his athletic frame, and therefore of offering a more pragmatic option to his teammates. He instead has to play off of one touch, and then move forward and ahead of the ball, where his movements in deeper territory and finishing ability are such a strength. 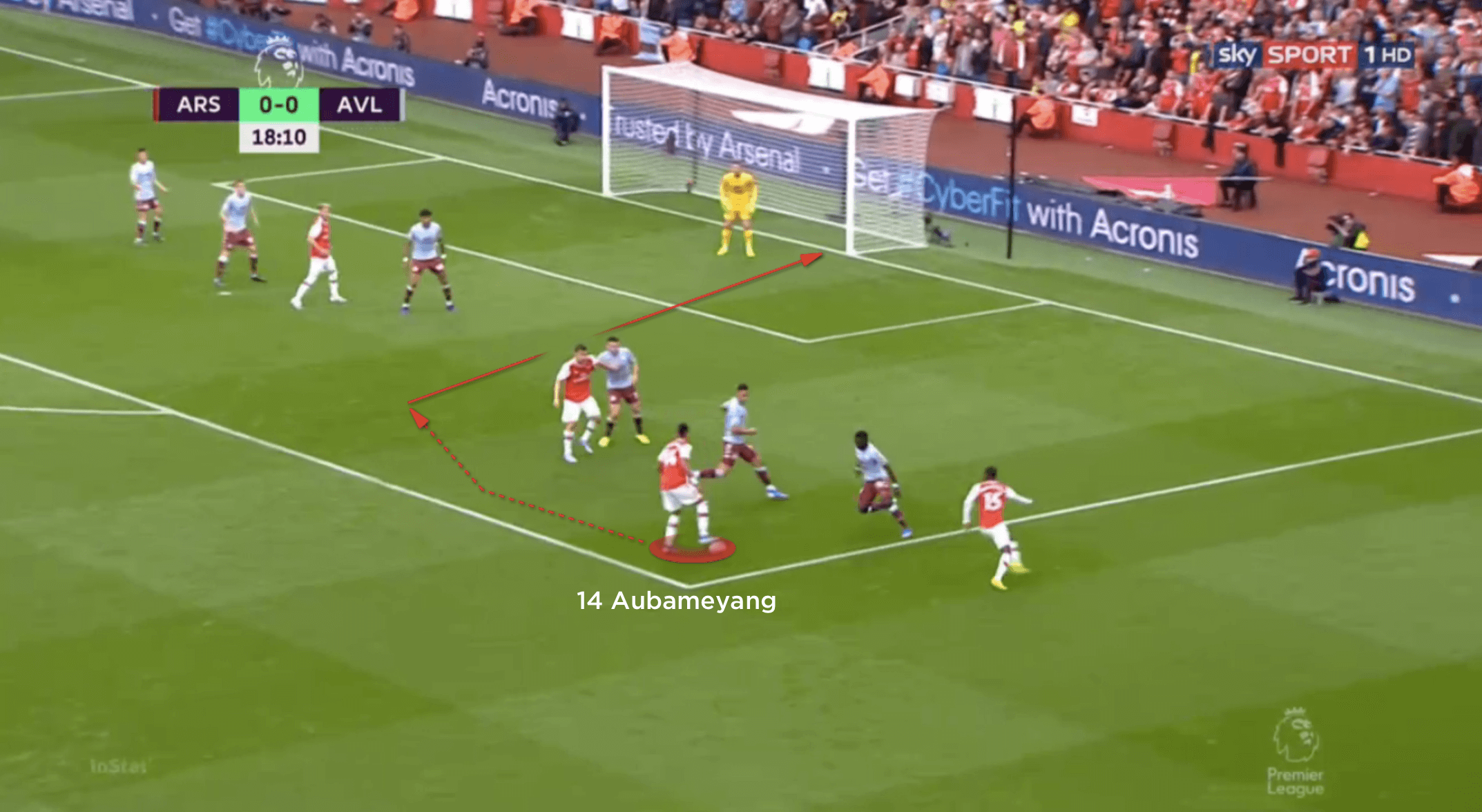 Role at Arsenal
Before Lacazette’s recent injury, Aubameyang was used in different roles across Arsenal’s attack; since then he has largely been their central attacker. Emery has favoured a 4-3-3 formation built on either a single or double pivot in midfield and a four-diamond-two, but in Lacazette’s absence, Aubameyang has become Arsenal’s lone striker.

His recent success, and that which contributed to him being named player of the month, has regardless continued to come through wider spaces within the penalty area or when receiving towards the edge of the inside channels. Nicolas Pépé’s presence on the right has provided them with a more direct running and dribbling threat; he regularly seeks to move inside on his left foot, drawing opponents who would otherwise be providing a defensive screen within midfield.

Aubameyang capitalises on the greater space Pépé provides to receive between the lines and attack, most commonly on the left (below) and either on the edge of or inside the penalty area. If the relevant attack continues along the right he is then capable of attacking spaces in behind – again from an inside left position – and of latching on to balls played across goal. 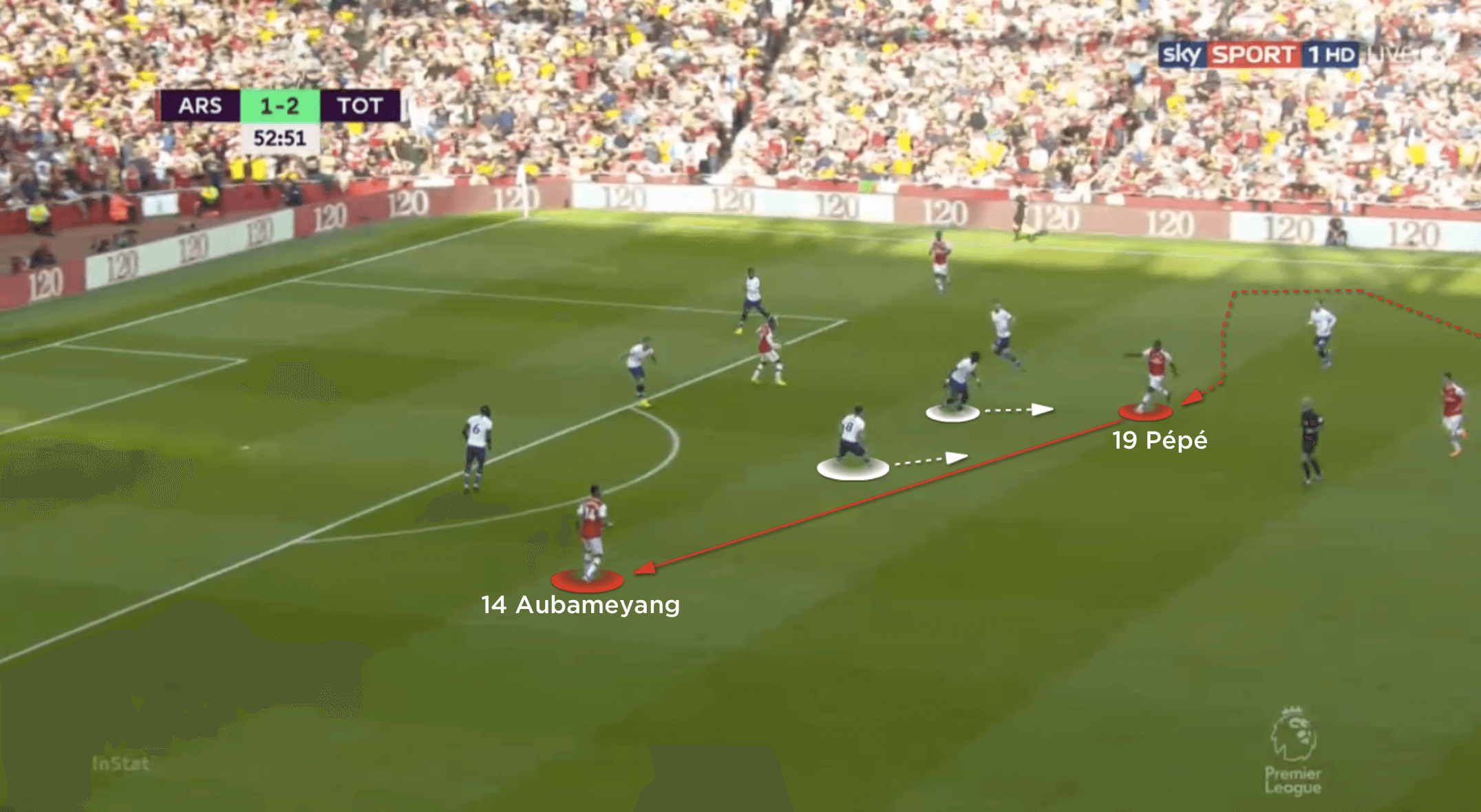 When Arsenal start with two number eights, the additional attacking midfielder towards Pépé and the overlapping right-back contributes to more attacks on the right, and therefore the opposing left-sided central defender becoming increasingly outnumbered, encouraging Aubameyang to attack the other, one-on-one, or move into space (below). Similar outcomes are achieved in Emery’s four-diamond-two, when Mesut Özil can feature as their number 10.

Aubameyang’s penetrative movements also encourage swift attacks after regains in midfield, and therefore further moments of transition. His movements in behind, coupled with Pépé’s pace, mean Arsenal can break with speed; their starting left-back also capitalises on his direct movements from an inside left position. 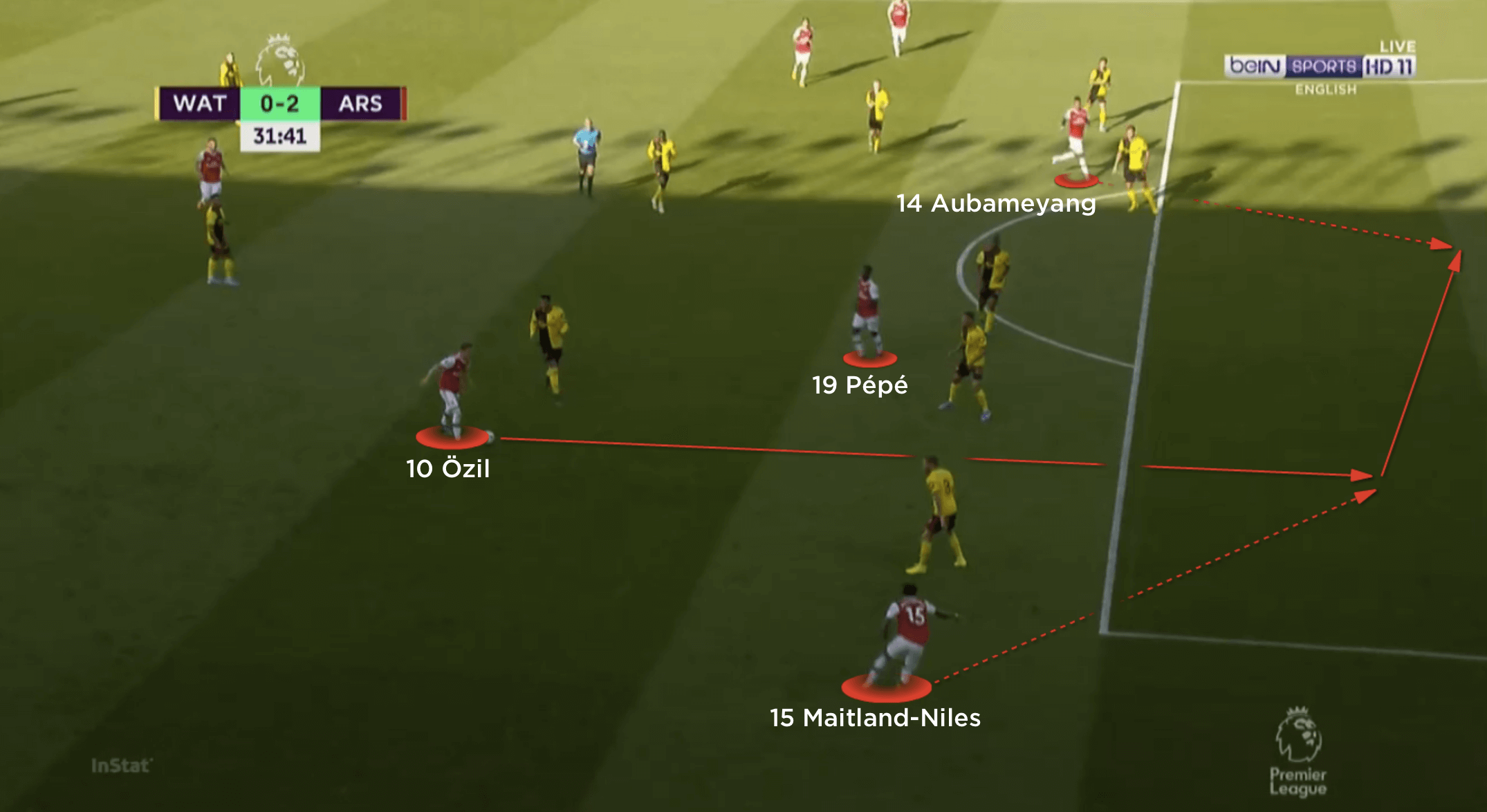 His counter-attacking contributions have similarly been more influential on the left. In contrast to Pépé moving inside on to his favoured left foot, Aubameyang can maintain his penetrative runs in behind and across the back line, where he will attempt to combine with runners, reducing his goalscoring chances when he moves across the right, but ultimately increasing them from the left. 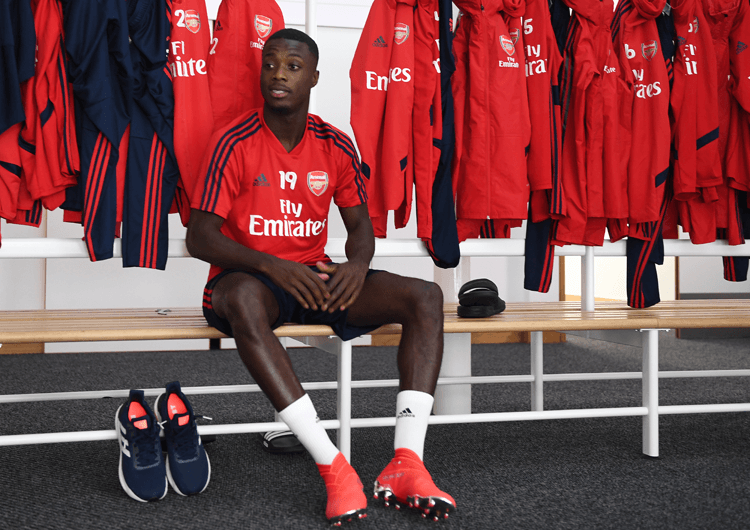 Arsenal shattered their transfer record to sign Nicolas Pépé from Lille for £72m. Our professional coaches assess exactly why

Aaron Ramsey left Arsenal, where he had spent 11 years, to join Juventus. Our professional coaches analyse how the Welshman has settled in Serie A, and Turin 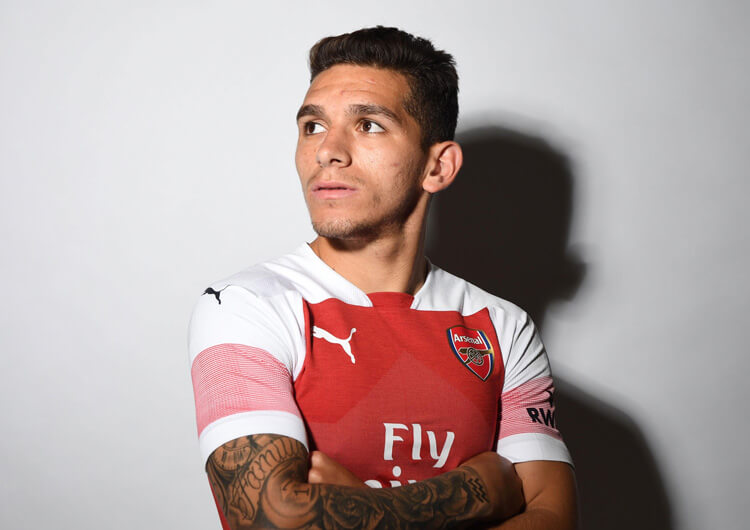 Arsenal turned to Lucas Torreira to finally end their long-term vacancy for a defensive midfielder. Our professional coaches assess exactly why