Profile
It was former Arsenal manager Unai Emery who oversaw his £8m transfer from Chelsea in August 2019, but if he is to succeed at his new club it will be Emery’s successor Mikel Arteta who will most benefit from the arrival of David Luiz. The Brazil international’s second period as a Chelsea player concluded three years after he returned to the club for a second time for a fee of £34m from Paris Saint-Germain – who had first recruited him from them for £40m three years earlier.

Chelsea had first bought Luiz from Benfica for a fee of £21m in January 2011; it was in Paris that he then worked with Emery, after he had already eliminated Chelsea from the Champions League in March 2015 by scoring the header that gave them the lead in their round-of-16 fixture. He has already played his former club this season, when Frank Lampard’s team recovered from a losing position at the Emirates Stadium to ensure a defeat for Arteta in his first home match as manager.

Tactical analysis
Luiz reads play intelligently, and is therefore effective at judging when an opponent will make their final contact with the ball and blocking attempts at goal. He effectively and discreetly leaves his position to close possession down; or, against quicker and more direct opponents who prefer dribbling, he will move with them and match their running pattern to delay them but close off their angles towards goal. This allows his teammates to more easily recover into an organised defensive block.

The Brazilian uses his body well – particularly against opponents of a similar size – but directly tackles them with less regularity. He instead uses his arms and upper body to move into the attacker’s running path before stretching his legs across that attacker as a player would when attempting to shield possession. More traditional, assertive, standing tackles are largely reserved for when recovering a position during a transitional moment, or desperately defending close to goal. 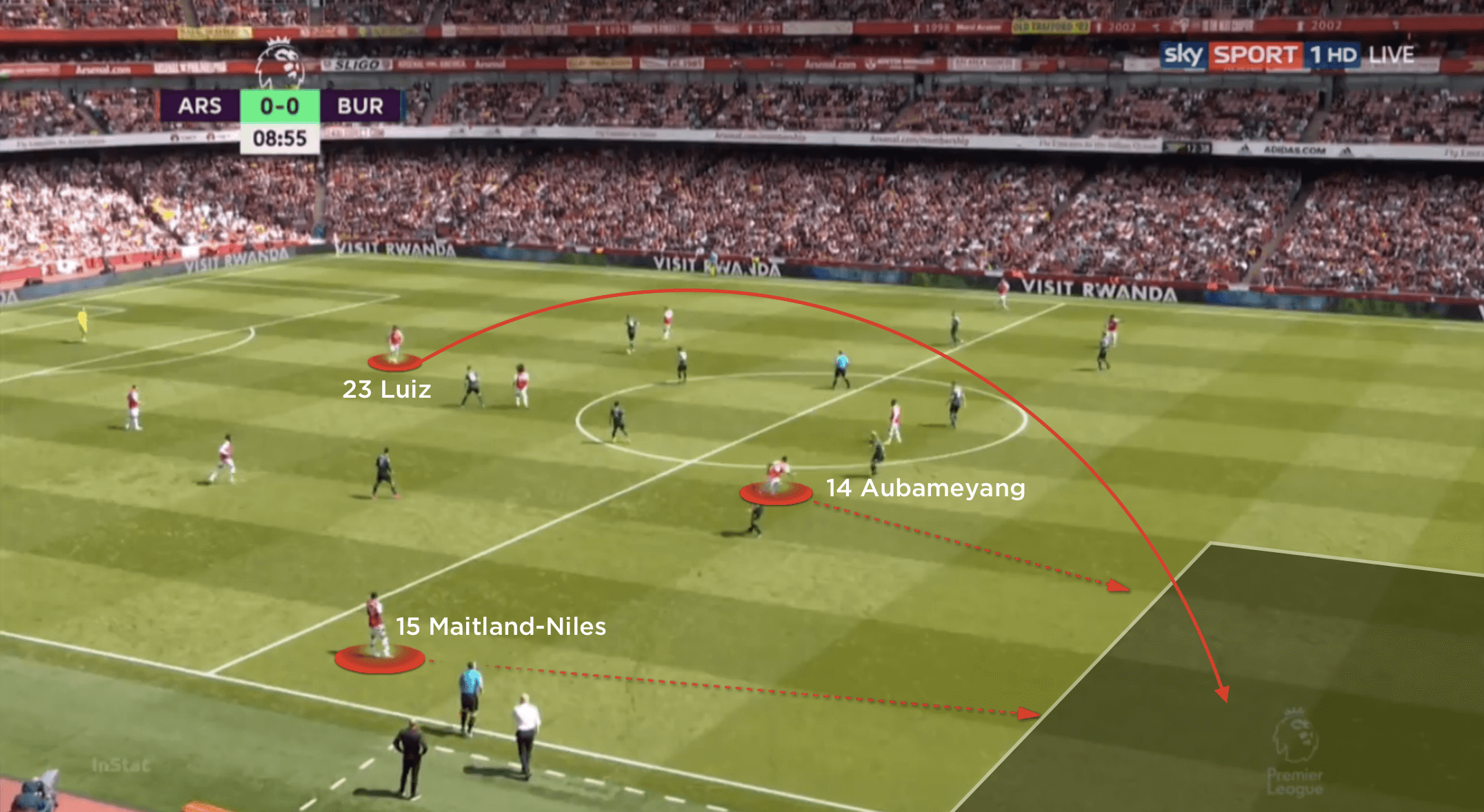 Defending in that manner allows Luiz to instead regain possession and then retain it, creating more moments of transition, instead of sending the ball into neutral territory and potentially contributing to a further spell off the ball. Importantly, he excels with the ball at his feet.

Luiz’s passing ability is among the finest of any active defender, and perhaps even the very finest over longer distances (above). The accuracy and angles of his deliveries (below) as the left-sided central defender can both overcome pressure and find forward runners. His ability with both feet enables him to detect and then deliver the pass required for either an inside forward or one playing with greater width. 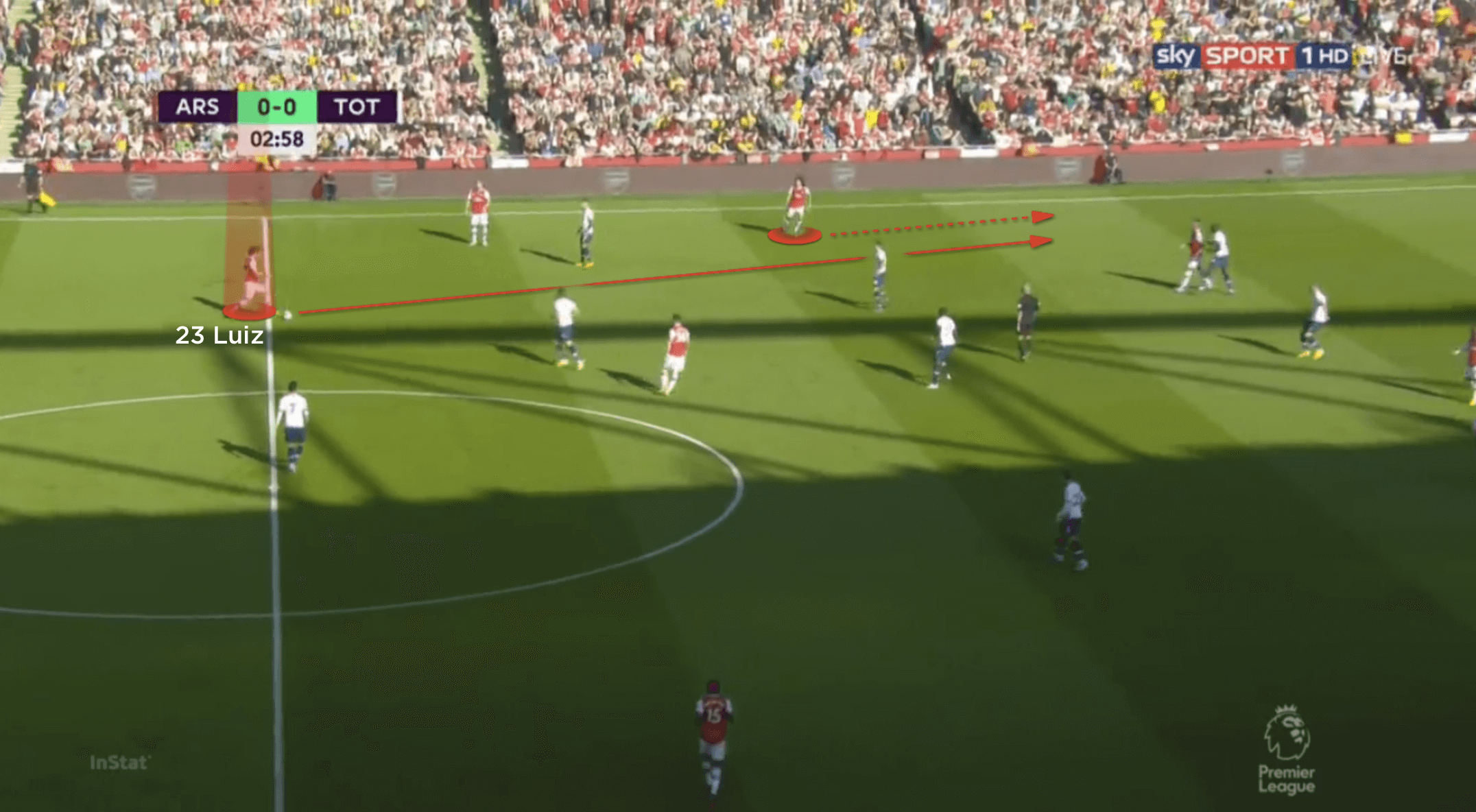 Luiz’s expressive nature can contribute to him becoming exposed when playing as one of two central defenders – particularly when required to mark an opponent while juggling other defensive screens, and even more so if that opponent is moving towards his blindside. When there is further space that requires covering, and fewer teammates free and sufficiently compact to support him, he can become more vulnerable.

It is when playing as one of three central defenders that he is more effective. The Brazilian is then able to prioritise one opponent or area, instead of risking becoming isolated against a predatory attacker. His occasionally inconsistent judgement over when to attempt a tackle is also less of a concern within a back three or five. 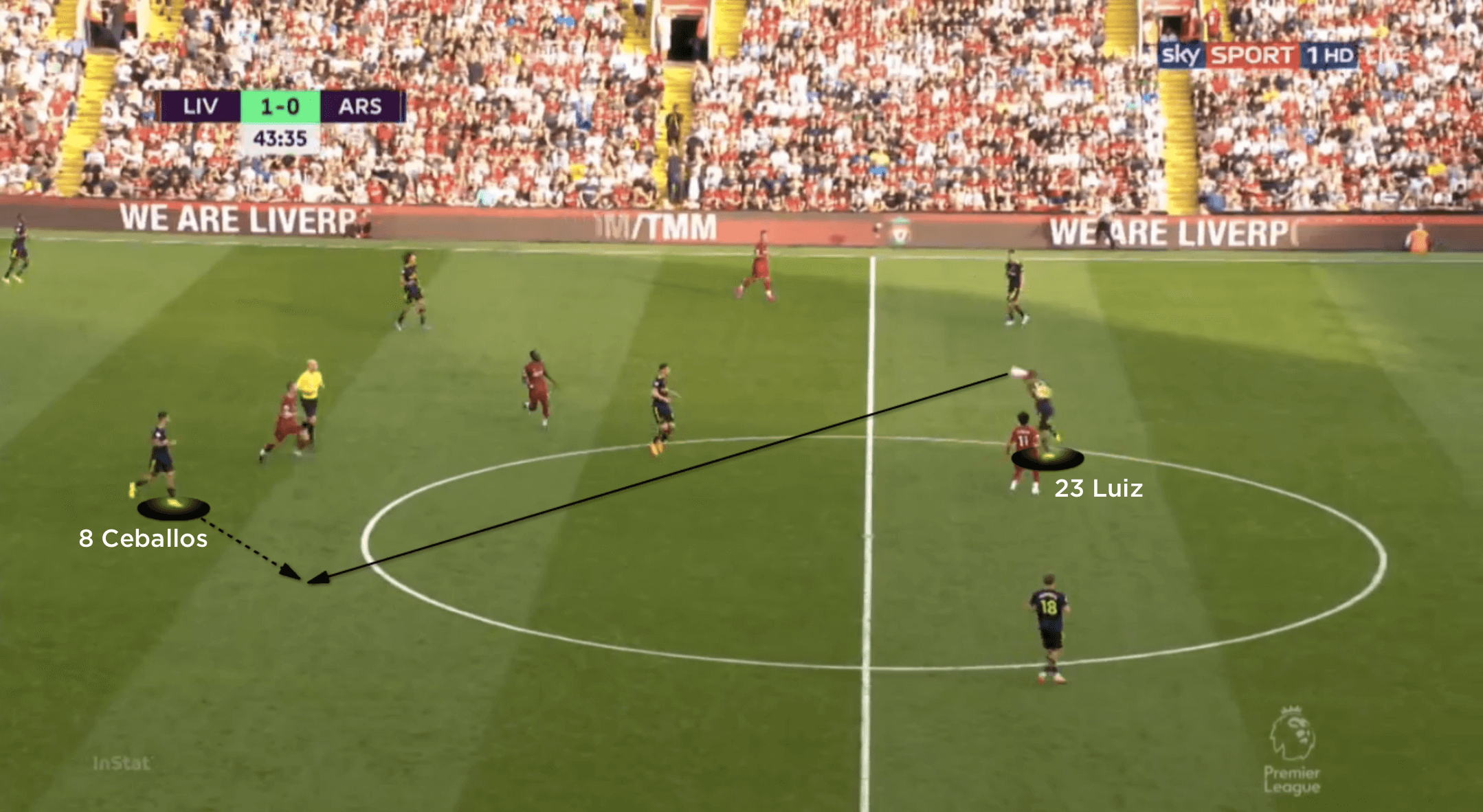 Role at Arsenal
Luiz’s ability to secure loose balls and take control when defending against counter-attacks has so far helped Arsenal’s midfield to gain more possession. Instead of simply clearing danger, he often works a contested ball towards a teammate (above) to turn the act of defending into possession, encouraging his teammates to remain in more advanced territory and to avoid adopting a deeper defensive block.

He can also offer an element of composure and control in an area where teammates Shkodran Mustafi and Sokratis Papastathopoulos have often struggled to provide it. When he does so, further forwards his teammates can therefore advance into spaces and attacking areas. 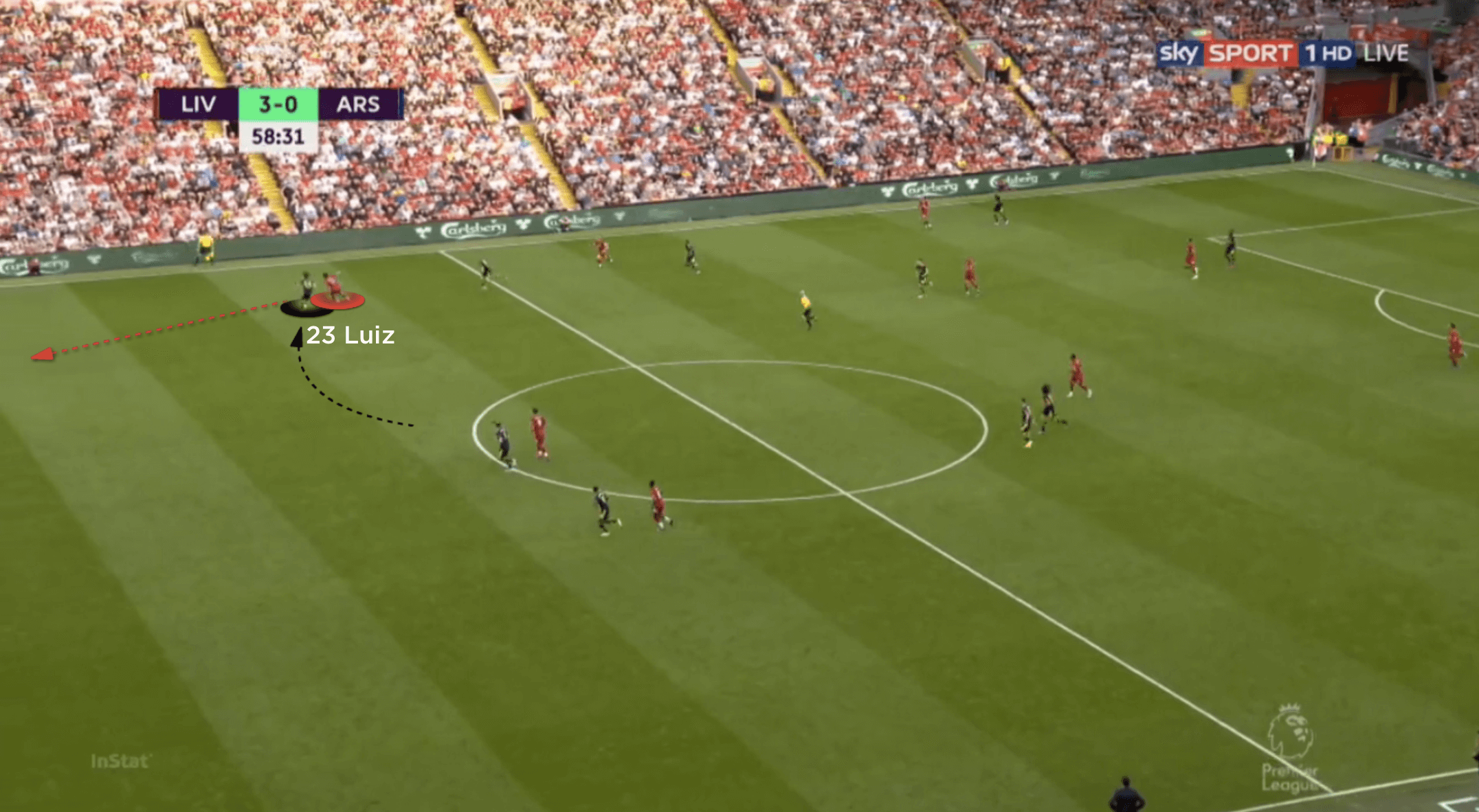 It is his tackling, and within that his judgement of when to engage an attacker, that has occasionally caused him problems at his new club. Luiz’s enthusiasm, and the aggressive pressure he often attempts to apply to opponents, has been exploited by teams that remain patient in possession and wait for him to overcommit (above).

In his short spell in charge at the Emirates, Arteta has so far remained committed to a back four, from where Luiz’s switches of play from the left inside channel can help penetrate beyond opponents’ defensive structure. The improving Nicolas Pépé’s influence from the right can grow further via those switches, with Ainsley Maitland-Niles behind him and Pierre-Emerick Aubameyang – if operating as a central striker – also capable of profiting against opponents organised into a vertically compact mid-block.

Under the Spaniard, Luiz is so far being encouraged to play more passes – where he averaged 51 per game when managed Emery, with Arteta that figure has grown to 73. Emery’s defensive midfielders were previously given responsibility for advancing beyond opposition lines; Luiz is increasingly doing so instead, and that ability to work possession effectively from defence into what has the potential to be a fine attack could largely determine the remainder of their season.

Those likely to operate as Arsenal’s deep-lying central midfielders – Granit Xhaka, Mattéo Guendouzi and Lucas Torreria – simply do not consistently offer the same passing range. If their opponents can be expected to become increasingly stretched as Arteta’s players adjust to his methods, Luiz’s ball-playing ability is likely to become increasingly key. 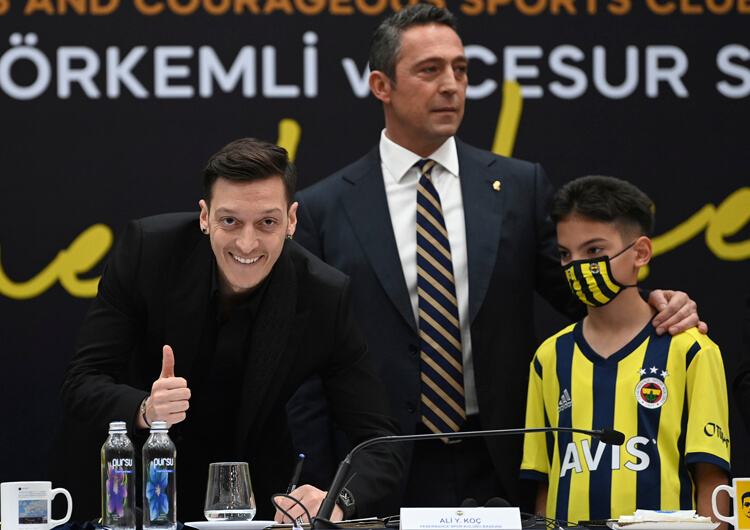 With Mesut Özil having joined Fenerbahce and the Turkish Super Lig from Arsenal, we analyse why he had become surplus to requirements in London 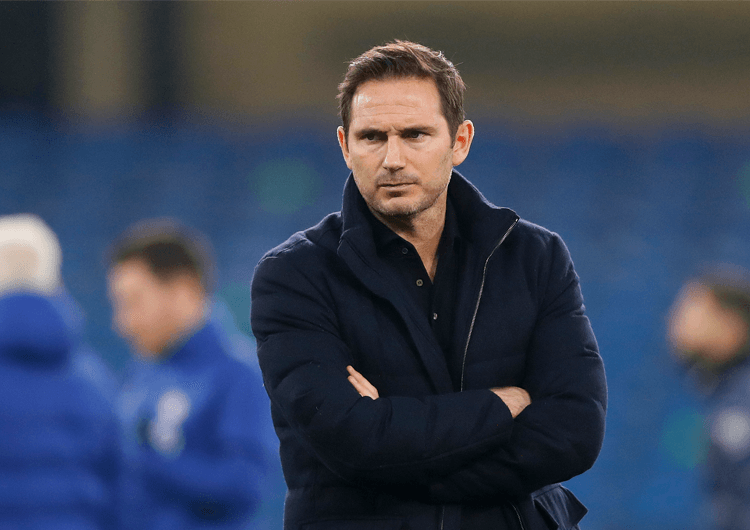 Club favourite Frank Lampard has left Chelsea, despite his team showing signs of evolving. Our professional coaches analyse the promise he showed in management 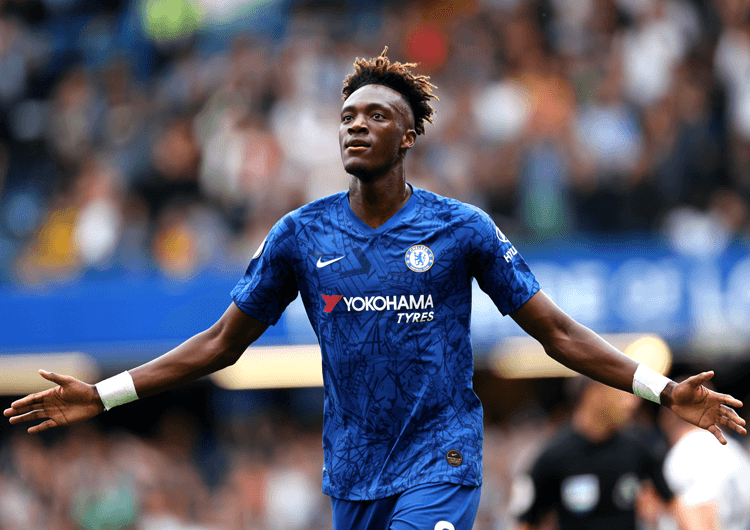 Tammy Abraham is emerging as a player of significant promise for both England and Chelsea. Our professional coaches analyse why he is admired