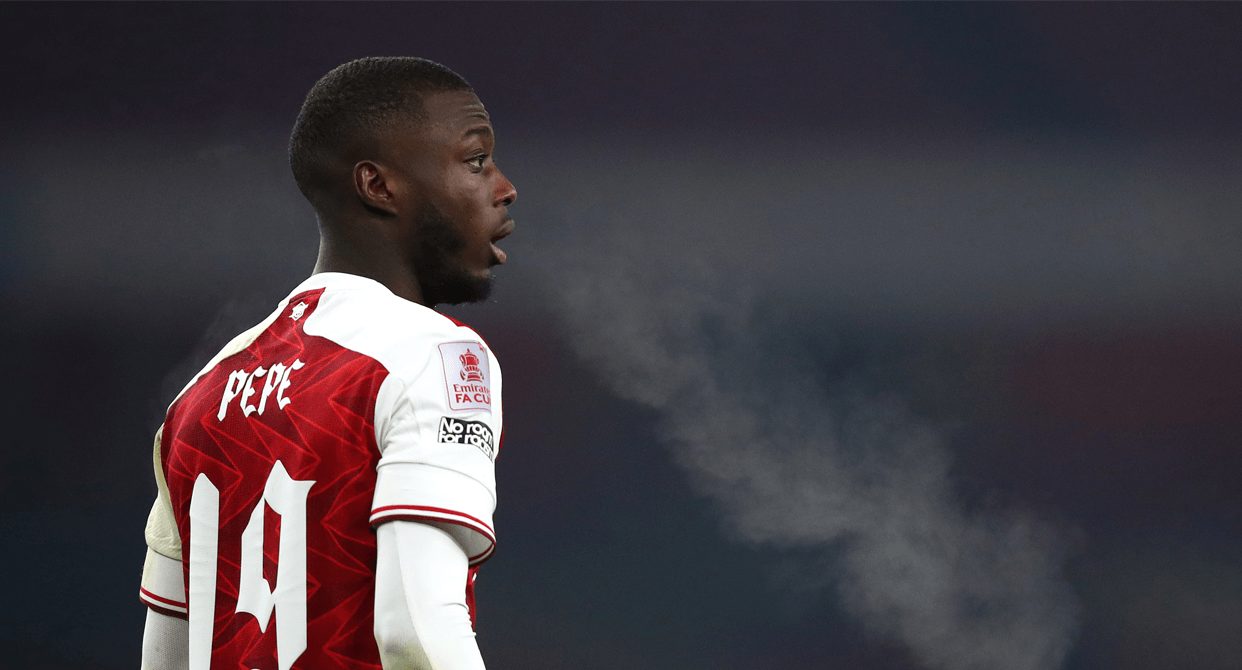 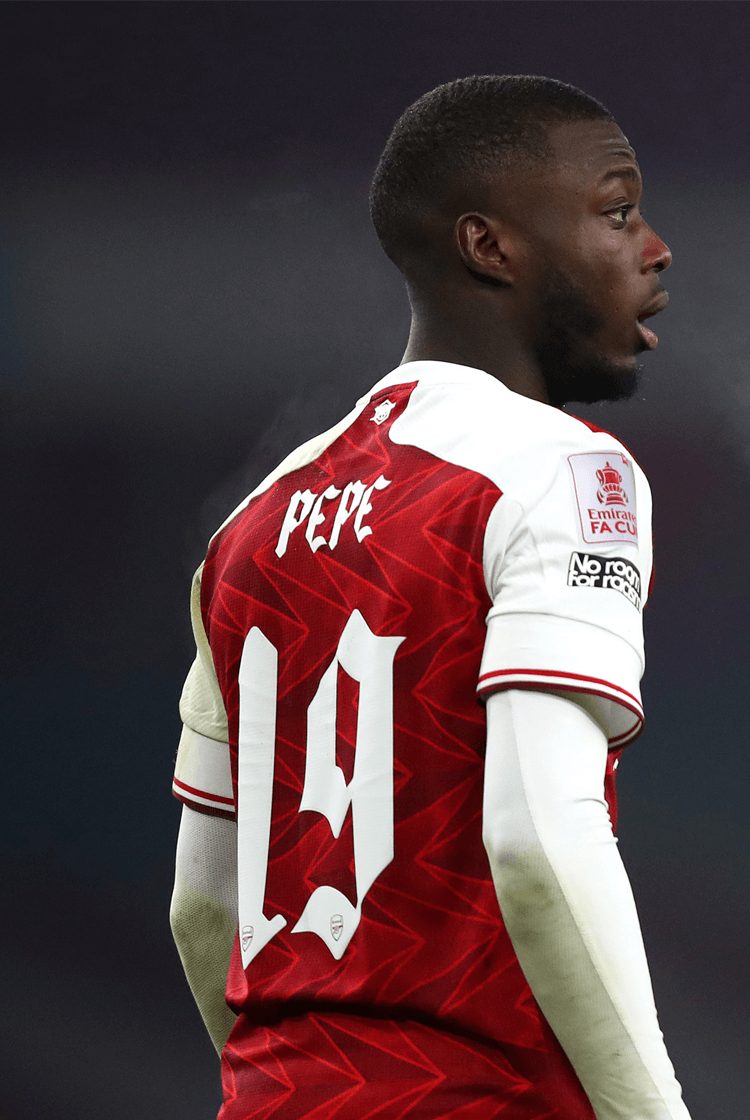 Profile
Nicolas Pépé’s rise was as rapid as they come. Having played for Orléans in the French third tier as recently as 2016, he was enjoying a short but successful spell at Lille under Marcelo Bielsa and then Christophe Galtier when in August 2019 Arsenal broke their transfer record to sign a wide player, then 24, with relatively little Ligue 1 pedigree. However, in his final season at Lille, Pépé ranked second only to Paris Saint-Germain’s Kylian Mbappe in the goalscoring charts with 22 goals – and he supplemented those goals with 11 assists, also the second-most in the division. It was no surprise, then, that he earned a move to the Premier League – but expectations of him were naturally high after that hugely impressive 2018/19.

It took Pépé time to settle in England, but he is finally proving his worth, and Arsenal's manager Mikel Arteta believes any momentum with his form has to be seized upon. “When you have momentum in football, when you have to earn the right to play, then you cannot lose it,” Arteta said. “If you do, you know that someone else will be knocking on your door.”

Tactical analysis
At Lille, Pépé was the classic outside-in wide forward. He started in wide positions before ending in either the inside channel or central lane, as close to goal as possible, with the aim of getting a shot off. His direct running and dribbling caused Ligue 1 defenders trouble on a weekly basis – a significant portion of his goals came after he had beaten an opponent and then bent a left-footed shot into the far corner.

He has not been as successful since moving to the Premier League, having struggled against a higher standard of defender. Pépé had also had some success in France running in behind – making runs to between the opposing left-back and centre-back to go through on goal – but he has found those opportunities harder to come by in the Premier League. As a result, he is having far fewer clear-cut chances – and scoring far fewer goals. In his first 18 months with Arsenal, Pépé averaged 0.8 shots on target per 90 minutes in Premier League games; exactly half the 1.6 per 90 minutes in Ligue 1 that he averaged in his final season at Lille.

He shows flashes of brilliance, particularly with close control to beat an opponent, but he needs to become more consistent with his dribbling. He has the ability to beat most defenders, but struggles when he is closed down quickly, especially when his opponent takes a physical approach. Pépé is too easily muscled off-balance and off the ball, so he needs to become smarter at moving the ball and evading contact. As Riyad Mahrez, Dwight McNeil and Diogo Jota have shown, an apparent lack of physical presence should be no barrier to success in the Premier League.

That also applies to situations when he receives the ball with his back to goal. Even in his defensive half, where there is less immediate pressure on the ball, Pépé struggles to retain the ball and turn to face forwards when someone approaches him. The very best players are constantly aware of their surroundings – and the best dribblers know which way to turn, having scanned and seen which direction their opponent is approaching from. Pépé has so far been unable to prove he is capable of doing that; he needs to improve his scanning and awareness so that he can protect the ball and then progress play both quicker and more effectively.

He also needs to improve his defending. His concentration levels are poor when he is required to defend – too often his opponent moves ahead of him when his eyes are drawn towards the ball and temporarily off the player he is supposed to be marking. That extends to defensive set-pieces, where he has been tried out in many different roles but has occasionally been at fault for not following his opponent and allowing a goal to be scored (above).

Role at Arsenal
Pépé arrived at Arsenal solely as a right-sided forward who liked to roam away from the touchline and into spaces between the lines or in behind – but he has had to develop his game when playing on the right, and he has also been used on the left side of their attack.

Even from the left, he likes to move into central positions and is not afraid to shoot with his weaker right foot, but he has also shown a greater willingness to go around the outside and cross (above). Arteta has spoken about his desire for his team to put more crosses in, and getting Pépé into positions to place a square ball across the face of goal is one such route to that happening. The signs are that Pépé is working on doing just that.

When playing on the right, his inclination to move infield invites his supporting right-back – usually Héctor Bellerín – to overlap, and he uses those runs to create space to shoot. He has a great deal of confidence in his ability and is sometimes too set on shooting, all too often leaving his teammates exasperated that he chose to go for goal rather than look to find another red shirt.

When he has the chance to play a through ball for a teammate further ahead of him, he demonstrates good vision and weight of pass to put that player in on goal. He could help Arsenal more by more often looking to get on the ball between the lines, but he has also shown an ability to play through balls effectively from wide (above).

He appears to be showing awareness that he needs to work to keep his place in their team, and that means putting in more effort when his team does not have the ball. There are times when Arteta’s side presses high up the pitch, and Pépé is increasingly showing signs he is willing to work to win the ball back. He is also doing more when it comes to working back towards his own goal, running back to catch opponents as they break and making recovery runs to get back into shape as quickly as possible at defensive transitions. Arteta will certainly appreciate those details.

The fee Arsenal paid for Pépé ensured sky-high expectations from the start of his Premier League career, and history has proven that players often need a year – sometimes longer – to settle in to a new league. There was naturally disappointment that he could not immediately replicate his goalscoring exploits for Lille – and ridicule from elsewhere that investing in the Ivorian was a waste of money. Slowly but surely, however, Pépé is improving and adjusting to his role at Arsenal.