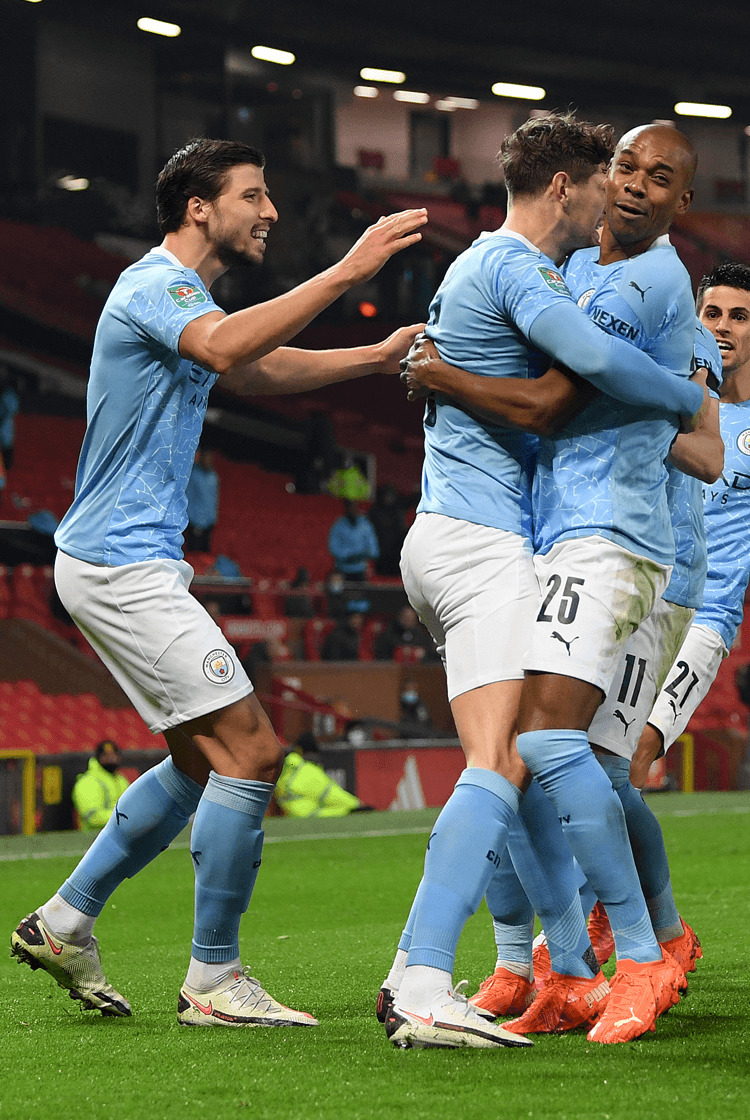 Holders Manchester City reached the League Cup final where they will meet Tottenham after easing past rivals Manchester United. In their pursuit of retaining the English football season's first major trophy for a fourth year, they were rewarded for an ambitious, attacking approach with second-half goals from the in-form John Stones and Fernandinho. "It is fantastic to go day by day, against rivals United at Old Trafford, and play incredible football, win and go to Wembley again," said their manager Pep Guardiola. "John Stones came back; he made another outstanding performance. But the most important thing he has been able to do – something he has struggled with the past three or four years – is play four, five, six games in a row. This is so important – for him especially, and for us." Ole Gunnar Solskjaer said: "It was about a lack of quality compared to them. They deserved to win. I'm disappointed to concede at two set-plays. We didn't have the margins with us. After they scored, we had more of the ball but we didn't create enough." 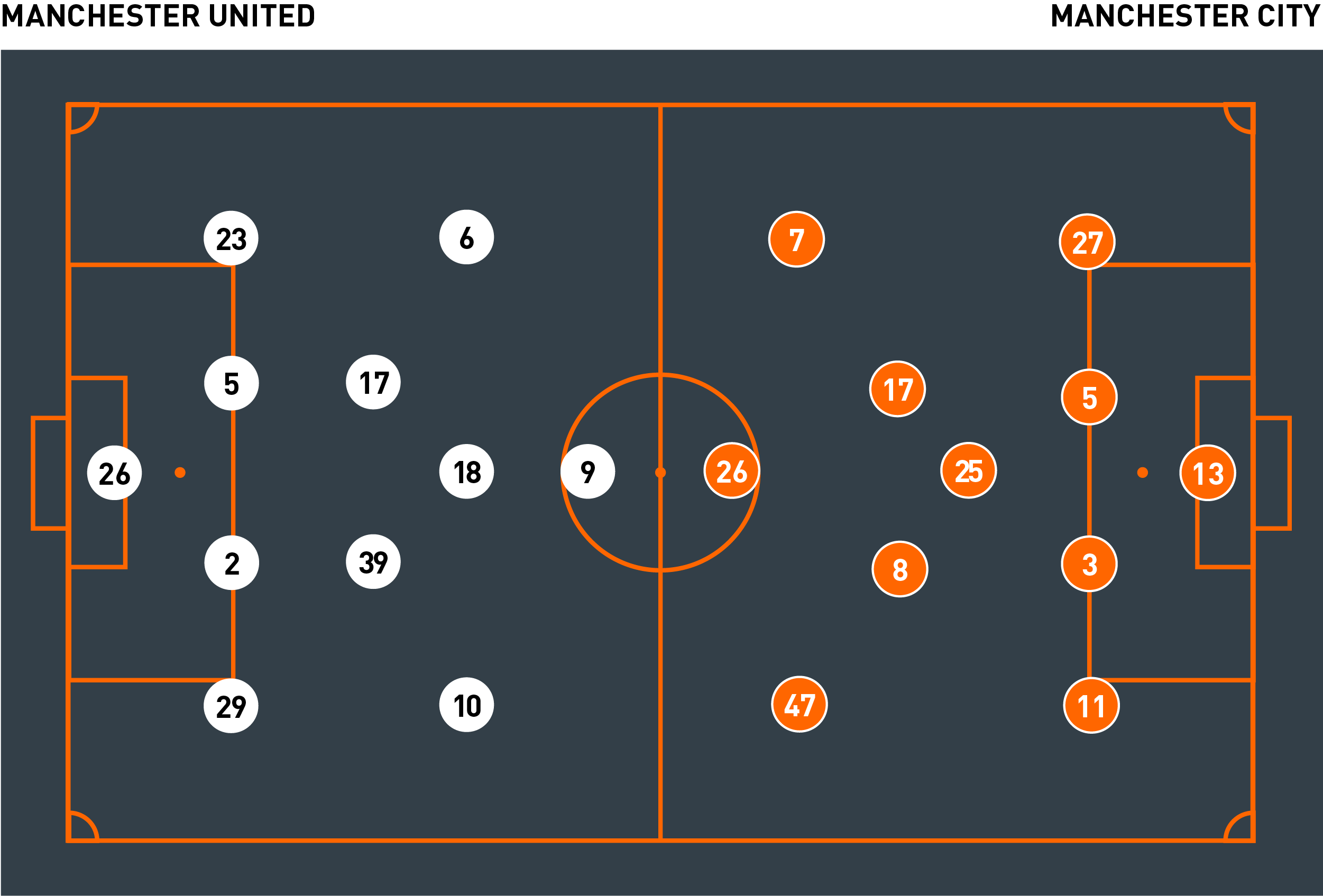 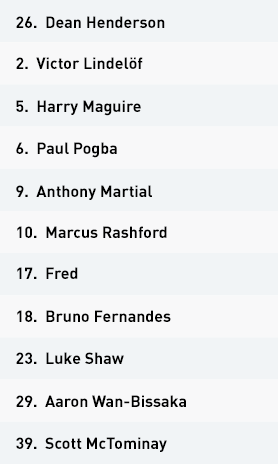 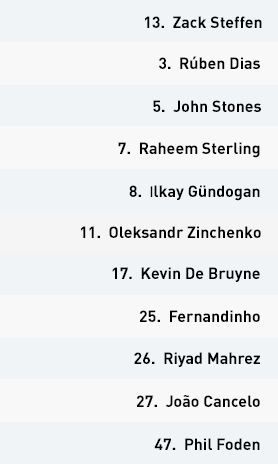 Manchester United were organised by their manager Ole Gunnar Solskjaer into a 4-2-3-1 formation that featured Marcus Rashford, Bruno Fernandes and Paul Pogba behind Anthony Martial. Their opponents, Manchester City, defended with a 4-1-4-1; Fernandinho featured between defence and midfield, and Riyad Mahrez was their central attacker.

United sought to build from the back and to play through City's high press during the first half. Mahrez led that press by closing down the in-possession central defender at an angle that prevented passes being played to the other. In midfield Ilkay Gündogan and Kevin De Bruyne respectively took Scott McTominay and Fred, Phil Foden and Raheem Sterling prioritised United's full-backs, and Fernandinho took Fernandes when the Portuguese moved ballside.

With only one player pressing in the front line of City's structure, United attempted to bounce passes from Victor Lindelöf to Fred or McTominay and then wide to Harry Maguire – or to start with Maguire and finish with Lindelöf – to bypass Mahrez so that the in-possession defender could then carry the ball forwards. City therefore adjusted through either De Bruyne or Gündogan moving to press the relevant central defender, the spare midfielder covering United's free midfielder, and Mahrez tucking in to take the other.

The organisation they demonstrated undermined United's attempts to play through midfield and contributed to them playing the longer passes City were largely comfortable defending against. United's greatest attacking threat, certainly to start with, came in the more chaotic moments of transition when their pace and technical quality gave them potential in the spaces that existed.


City didn't maintain that press all evening, however, and when their intensity subtly reduced, United found it easier to access those in midfield. Pogba was encouraged to move infield from the left to encourage Luke Shaw to advance, and he therefore often received between the lines before setting to Fred or McTominay, who in turn attempted penetrative passes.

In the second half Rashford and Martial played as central attackers and Pogba moved deeper, to alongside Fernandes, who also started to drift towards the left. If United played into Pogba or Fernandes, the front two ahead of them sought to make runs in behind, but they too rarely had the spaces they required, so playing to Fernandes towards the left, and the Portuguese delivering aerial crosses into the penalty area, became the alternative that rarely succeeded.

Mason Greenwood was later introduced as their structure became a 2-2-6 in which Aaron Wan-Bissaka, Rashford, Martial, Greenwood, Fernandes and Shaw attacked across the width of the pitch. Pep Guardiola responded by replacing Mahrez with Rodri to give them increased defensive stability and improve their ability to prevent spaces from appearing; United ultimately too rarely threatened, and didn't do so by design.

Manchester City were unusally set up by Pep Guardiola into a 3-2-5 formation. John Stones, Rúben Dias and Oleksandr Zinchenko formed their front three, and João Cancelo former their double pivot alongside Fernandinho. Their hosts, Manchester United, remained in their long-favoured 4-2-3-1.

Phil Foden and Raheem Sterling moved high and wide, and between them Ilkay Gündogan, Kevin De Bruyne and Riyad Mahrez were somewhat deeper, creating overloads in the first and second lines of City's attempts to build play. With their goalkeeper Zack Steffen and their back three forming a back three against Marcus Rashford, Anthony Martial and Bruno Fernandes, Cancelo, Fernandinho, Gündogan, De Bruyne and Mahrez overloaded Paul Pogba, Fred and Scott McTominay.

Victor Lindelöf and Harry Maguire were uncertain over whether to drop with the attackers opposite them. By holding their position they contributed to the overloads City were relishing; by moving they vacated spaces Foden and Sterling could make diagonal runs into. The visitors also targeted Luke Shaw via a two-on-one intended to access the spaces behind him with longer passes from deeper territory; De Bruyne sought to occupy Shaw and to move him infield with diagonal runs while Sterling advanced outside of him, or Sterling took him infield and De Bruyne moved wide.


With the overloads they were creating, City regularly built through and advanced beyond United's midfield. United particularly struggled to adjust to how dynamic City's structure was, and therefore to prevent them from progressing into the final third.

Only City too often playing crosses when they did so – the deliveries and attempted finishes weren't effective enough – meant that their tactical brilliance wasn't rewarded as often as it perhaps should have been. Their two goals came after set-pieces.