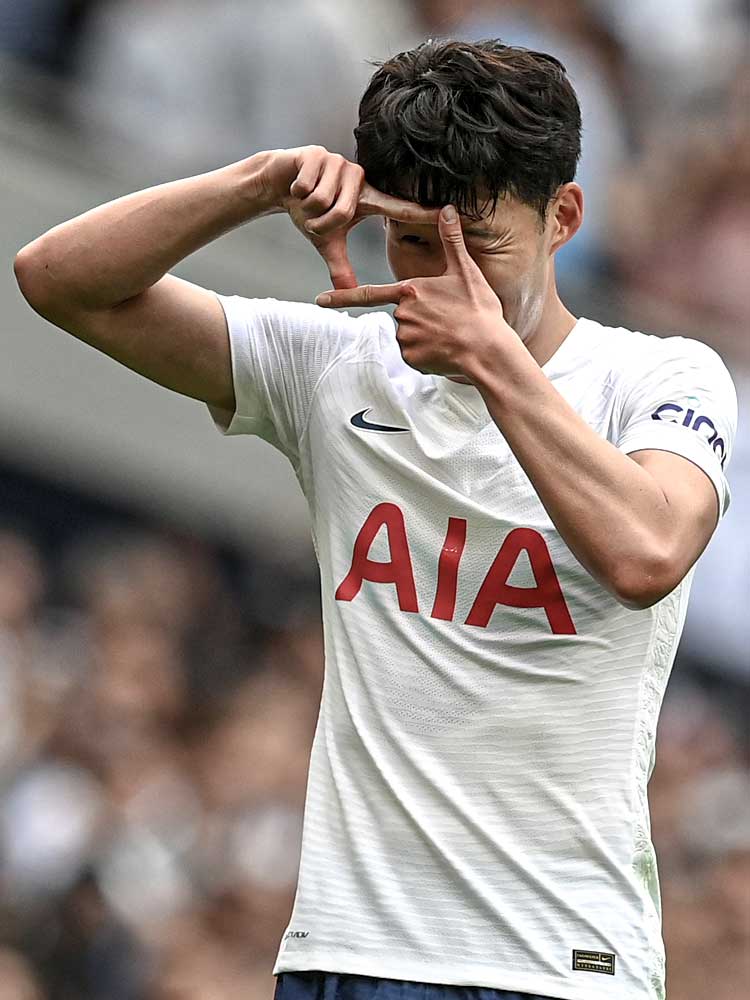 Tottenham overcame the absence of Harry Kane to beat the defending Premier League champions on the occasion of Nuno Espírito Santo's first match as manager. An eventful summer at the club involved Nuno being appointed as the permanent successor to José Mourinho and Kane being the subject of intense interest from Manchester City, who also spent £100m recruiting Jack Grealish. Grealish's debut, however, ultimately ended in disappointment because Son Heung-min, so long so effective alongside Kane, gave Spurs the lead with a fine finish early in the second half that they thereafter impressively defended. "They worked really hard," said Nuno. "The distance they covered; the balance; the fight. Still a long way to go but most of the things the boys did well." His opposite number, Pep Guardiola, said: "We allowed them too much. We could not control it – especially the simple thing when you lose the passes in certain positions, it is always more difficult."

Nuno Espírito Santo organised Tottenham into a 4-2-3-1 formation that in the absence of Harry Kane was led by Lucas Moura, Steven Bergwijn and Son-Heung min. Their opponents, Manchester City, defended with a 4-4-2, via Jack Grealish advancing to alongside Ferran Torres.

City's dominance of the ball meant that Spurs largely progressed possession on the counter. The narrowness of their defensive shape meant that they offered numbers through the centre of the pitch to support those counters; it was a lack of intensity that meant they struggled to advance in behind City's defence, regardless of Bergwijn and Moura remaining advanced to offer, when possible, an attacking threat.

When their grasp of possession improved, Oliver Skipp and Pierre-Emile Hojbjerg, playing at the base of midfield, adopted wider positions, Spurs' full-backs provided their attacking width, and Dele Alli and Moura attacked through the inside channels as Son and Bergwijn operated as a nine and 10. Switches of play and direct passes through central territory to just beyond City's midfield also helped them to progress beyond City's mid-block and to establish some control. Their ability to compete for second balls therefore became essential, because of their potential to then overload City's midfield; they, similarly, posed a threat at set-pieces, which were often won after switches of play.

If building possession in their defensive third, they initially played short and then played more direct forward passes as Alli and Moura sought to isolate City's full-backs to enhance Spurs' ability to secure direct balls through the centre of the pitch. As they did so, Son and Bergwijn moved to operate as a narrow front two, in preparation for the second phase of Spurs' attack, before then bending their movements to outside of City's two central defenders.

During the second half on the counter there existed an increased desire to drive forwards and penetrate beyond those two central defenders, as the movements of Son and Bergwijn and the penetrative dribbles that followed regains demonstrated. Son's direct running stretched City's defence – increased spaces between full-back and central defender encouraged others to make runs – and when they broke forwards from their lower block he then gave Spurs the lead.

It was towards the right that they posed the more consistent threat. Hojberg pressed from there with aggression, and during the second half provided forward runs that encouraged Spurs' front two to advance further. When the Dane then made overlapping runs through the right inside channel they offered an increased presence around City's central defenders; with Sergio Reguilón advancing from left-back and contributing to the quick combinations that unfolded as they countered forwards, their attacks offered increased variety.

Pep Guardiola set Manchester City up into their long-term 4-3-3 formation that, for the first time, featured Jack Grealish as their left-sided central midfielder. Their hosts, Tottenham, reorganised to defend with a narrow 4-3-3 mid-block, via Dele Alli withdrawing into a deeper position.

City, typically, built possession via their short passing game, and prioritised doing so via wider territory and the inside channels. With Spurs' front three defending in a narrow shape, João Cancelo and Benjamin Mendy supported Rúben Dias and Nathan Aké closely, and Raheem Sterling and Riyad Mahrez provided their width. Grealish and Ilkay Gündogan made runs in behind Spurs back; four; Mendy later offered overlapping runs towards the left, and Cancelo supported through the right inside channel.

Gündogan's well-timed off-the-ball movements, made to complement Mahrez's dribbles, contributed to him penetrating through the right inside channel; City were significantly more fluid towards the left, where Grealish and Sterling both dribbled forwards, broke without the ball, and proved as capable of attacking around the outside of Spurs' defensive shape or through the inside channels, ensuring Japhen Tangana was consistently under pressure. Grealish overlapping outside of Sterling gave an insight into the potential they offer together.

Spurs' front three remained narrow, so their central midfielders were the ones who offered support when they were defending wider territory, and City could therefore create one-on-one via Sterling, Grealish and Mahrez, and at a time when Ferran Torres was bending runs in behind and focusing on the inside channels from where he was the target of passes from City's full-backs. City continued to build around Spurs' narrow shape and to progress possession into the final third via the inside channels, but once they did so they encountered their opponents' lower block. There were occasions when, because the speed of their build was intended to do so, they drew Spurs' midfielders towards one side of the pitch and had space to attack into on the opposite side, but that slower tempo continued into the final third, and their attacks were short of the penetrations and intensity required to advance through Spurs' deep-lying defence.

Nuno Espírito Santo's team later offered a staggered deeper block. Son Heung-min remained their most advanced player and was supported, from deeper territory, by Steven Bergwijn and Lucas Moura, whose positioning helped Pierre-Emile Hojbjerg and Dele Alli to cover the inside channels at an earlier stage. When that led to City playing crosses at an earlier stage in their attacks, Spurs, defending with numbers, rarely looked stretched.

City continued to offer greater potential towards the left, and Hojbjerg was therefore drawn across more often than was Alli on the right. That that was the case meant that they had opportunities to counter, and for Grealish and later Gabriel Jesus to receive in behind in space. Kevin De Bruyne's introduction as a substitute increased the speed of City's play and the number of switches of play across midfield at a time when they were more consistently penetrating in behind, but Spurs' low block remained resilient.