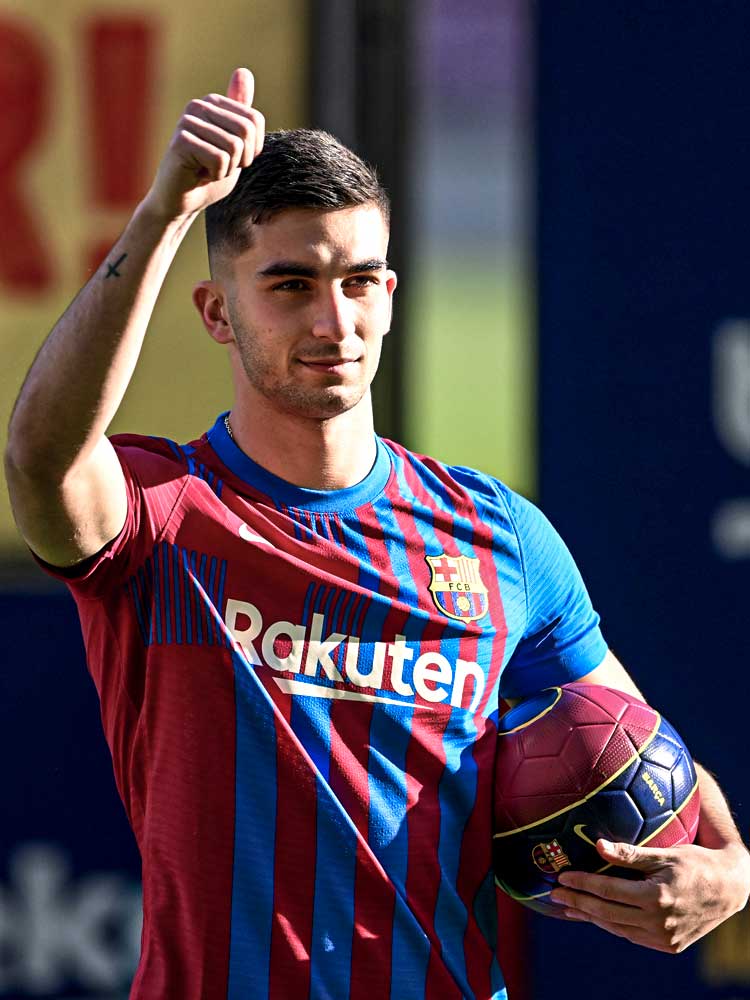 Profile
Ferran Torres had just started to show his worth as a regular at Manchester City when Barcelona made him the first major signing of Xavi's reign as manager. In the space of five months from that August, Lionel Messi and Antoine Griezmann had left and Sergio Agüero had retired, leaving Barcelona in need of attacking reinforcements. Torres' arrival for a fee of £46.3m in December 2021 could yet prove a long-term solution in that area of the pitch.

In 2020/21 – his first season at City – and aged 21, Ferran started 15 Premier League games and scored seven goals in an important supporting role as his team won the title. “It is his first season in England and his numbers are exceptional,” said City manager Pep Guardiola, who is among Xavi's influences. “He came as a winger, but he can be a number nine. The smell – the strikers know intuitively where the ball will arrive. He has that talent.”

Tactical analysis
Torres is a talented attacking midfielder who is extremely capable in possession, and he has the desire to improve and succeed at the top level. The combination of those qualities is the reason for his rapid rise.

He likes to play in an advanced position on the right, but is equally comfortable on the left or as a number 10 playing off a centre-forward.

He constantly looks for space, often by staying wide and hugging the touchline, but if the ball isn’t coming his way or if he sees a gap to run into he will happily move infield. When a teammate advances through midfield with the ball or a defender steps out of defence with it, he often makes a sudden, diagonal run off the wing and towards goal to try and receive in behind (below). He instinctively tries to find a route to goal at every opportunity; whenever he receives the ball, he looks to turn on it and to progress play.

When he receives to feet out wide and in space, he will dribble diagonally towards goal. He will then either combine with a teammate in a central position or, if he has isolated his opponent, attempt to dribble past him. In either case, Ferran’s aim is to get on the ball in the space behind the opposition’s defence and threaten goal.

He will also drift away from the touchline and come looking for the ball. He can link play with a first-time set back inside, but again it remains his aim to progress play. He is always aware of what is around him and where there is space to exploit, so after a backward pass, he will turn and sprint into the gap he has spotted (below).

If he has space to turn and play forwards immediately, he will make use of it. He has such good close control that he can quickly shift the ball and turn to face goal, and will swiftly play the ball to a teammate as an opponent approaches or tries to win the ball. He has a high-risk approach that can result in his team progressing forwards quickly but that also results in numerous turnovers. It helps that Ferran is an effective and enthusiastic counter-presser, and regularly wins the ball back or forces a mistake from the opposition once possession has been lost.

His preference to come looking for the ball and his willingness to receive passes in tight areas is useful in that he draws opponents towards the ball and creates space elsewhere for teammates. He shows good awareness of where space has been created. He often positions himself to receive in the area between a central defender and full-back, with the intention of forcing one of them to move towards him, before scanning around him so that he knows which player has approached him and where the space is. Doing so is particularly useful when he has the freedom to roam the final third to drag defenders out of position.

Role at Manchester City
City change formation regularly, and Ferran therefore featured in a number of positions, but he was most often deployed on the right side of attack in a 4-3-3. When he played there, however, City’s approach was slightly different to when Riyad Mahrez starts.

Mahrez will hold a wide position, stretching the opposition’s defence as much as possible and looking to receive to feet. City's right-back will then move into narrower positions to create a double pivot in central midfield, or provide underlapping runs. When Torres played, he drifted infield, and the full-back attacked around the outside (below). He is far more comfortable moving into central areas, and his teammates adapt to that.

Torres showed impressive maturity and versatility after moving to England by maintaining high standards regardless of his position and the system he was expected to fit into. His skill set – in particular his desire to come looking for the ball and his ability to receive in tight spaces – led to Guardiola fielding Torres as a false nine, a role the City manager believes Torres can play long-term.

City are extremely fluid in possession and Torres' movement into deep positions helped move the opposition’s defence around and create space for midfield runners to sprint into. His movement also helped create central overloads before the ball was spread wide once Mahrez, Phil Foden or Raheem Sterling had isolated a defender in a one-on-one situation.

Under Guardiola, City are extremely effective at finding a route into the space to either side of the six-yard box and then playing a ball across goal for someone to finish. When Kevin De Bruyne – who has played regularly as a false nine for City – is their nominal striker, they lack a goalscorer to attack the area in front of goal because it is not in the Belgian’s game to try and get on the end of crosses.

Torres, on the other hand, makes clever movements close to goal and shows a striker’s instinct to react to loose balls. He is also versatile and professional enough that he would willingly adapt to whatever the managers asked of him, and that will only help his chances of more success in the future.