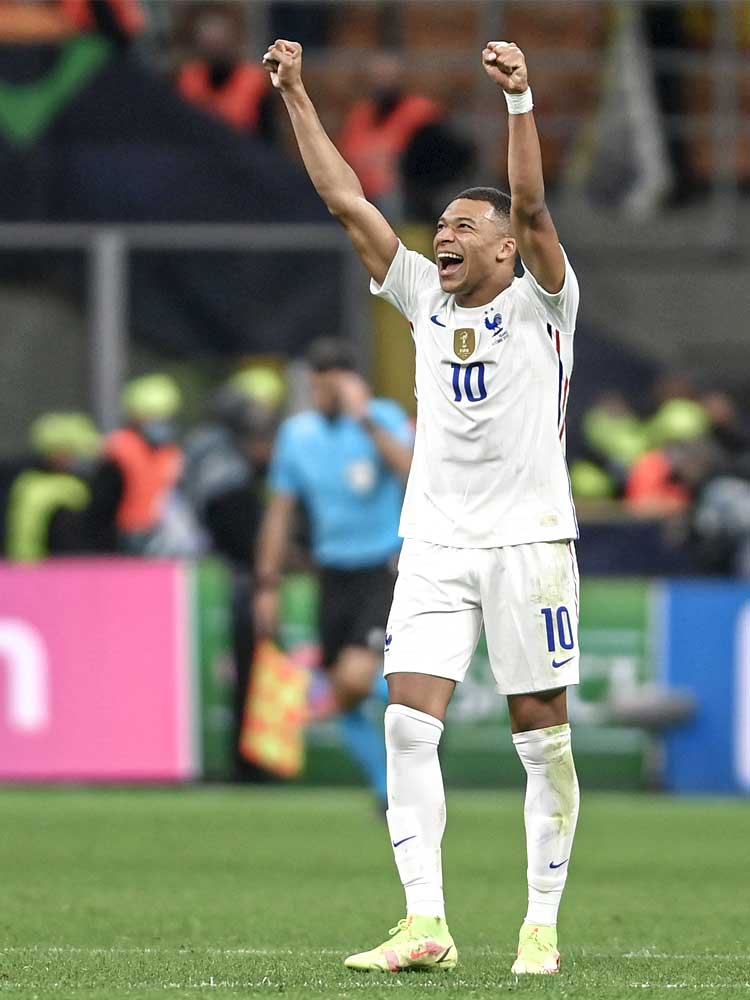 Kylian Mbappé secured redemption for the missed penalty that led to France's elimination from Euro 2020 when he scored the goal that delivered the Nations League. Spain went in front during the second half at the San Siro through Mikel Oyarzabal's finish; Karim Benzema then scored France's superb equalising goal just two minutes later, before Mbappé was controversially ruled onside when he gave France the lead. Hugo Lloris impressively denied both Oyarzabal and, in stoppage time, Yeremi Pino, to preserve that lead and make France the competition's second winners. "Kylian didn't have any doubts," said France's manager Didier Deschamps. "He was determined after lacking efficiency at the Euros. We were knocked out by Switzerland [at Euro 2020] but the France national team is still here. We're still among the best teams." His opposite number, Luis Enrique, said: "We have competed face to face against the world champions. It seemed like a clear offside to me, but I’m not talking about anything I can’t control. It leaves a bad taste because you see the sad faces of the players and fans at full-time."

Spain's wide triangles built around France's narrow front three
France's front line defended from particularly narrow territory when Spain built possession. Their number 10, Antoine Griezmann, tightly marked Sergio Busquets, Spain's defensive midfielder, throughout; doing so covered most of Spain's build-up in central territory. Wide triangles formed by a full-back, wide forward and the relevant central midfielder (below) were therefore essential in Spain progressing possession; towards the right, César Azpilicueta advanced and supported from behind Ferran Torres, and Gavi regularly ran through the inside channels to in behind France's left wing-back, or targeted space between the lines when Paul Pogba was drawn towards Azpilicueta.

Towards the left...
On the opposite side of the pitch (below), instead of attacking like Gavi, Rodri provided cover from around and behind possession. Marcos Alonso therefore advanced further forwards than did Azpilicueta, and Pablo Sarabia both offered runs infield and in behind, in response to Alonso's positioning, and attempted to threaten from wider territory. Spain, regardless, were initially less potent towards the left than right; they were most effective in the inside channels after drawing France's midfield line forwards, and in those spaces Sarabia and Rodri proved less effective than Gavi.

Busquets' influence during build-up phases
Busquets was consistently marked and, from France's narrow front three, the subject of intense defensive attention. He was therefore often forced to quickly play possession sideways and backwards; on the occasions Griezmann, his direct marker, struggled to remain close to him – which he mostly did during moments of transition – Busquets proved capable of linking into the forward runs being made by Spain's front three (below). During the second half France spent longer defending man for man, so that front three threatened in behind; Busquets released Mikel Oyarzabal to score their goal.

France's high press frustrated Spain
France's attempts to defend man for man in their defensive third were complemented by their wing-backs advancing at an earlier stage to take their opposing full-backs. Them doing so deprived Spain of the players who had previously been free when they built possession. France's two strikers pressed and forced their opposing central defenders, Eric García and Aymeric Laporte, wider; unless Oyarzabal withdrew to receive direct passes through the inside channels, Spain struggled to dominate possession and build from deeper territory as they previously had.

The positioning of France's two strikers
France's 3-4-1-2 proved most potent after regains were made in the midfield third. Their two strikers, Karim Benzema and Kylian Mbappé, adopted positions on the outside shoulder of their opposing central defenders, to discourage them from advancing to press the deeper-positioned Griezmann – preserving the space Griezmann sought between the lines. Their positioning also drew Spain's full-backs infield, in turn increasing the space France's wing-backs could overlap into (below).

Spain's pressure forced France to play directly
Spain's full-backs advanced to take their opposing wing-backs, often forcing them back; their front three also aggressively pressed France's central defenders, Jules Koundé, Presnel Kimpembe and Raphaël Varane. Griezmann withdrew into midfield to provide a further passing option, in turn encouraging Pogba to advance to towards the ball, but Spain's midfield three aggressively marked those in central midfield which, complemented by the aggressive pressure of Spain's front three, forced France's back three to play directly into Mbappé (below) and Benzema, who often struggled to secure the ball against of Spain's back four.

The movements of Mbappé and Benzema
The counter-press Spain applied through central territory was consistently effective. It limited access into France's two strikers, forcing Mbappé and Benzema to drift wide when regains were made in France's defensive half; after moving wide they could cut back infield or threaten in behind, as both of France's goals demonstrated. Whenever their double pivot resisted the pressure Spain were applying in midfield and switched play to their widely positioned strikers, France succeeded in progressing possession and creating goalscoring chances. Their wing-backs supported those attacks; Benjamin Pavard held his wide position on the right and found space to run into; on the left, Theo Hernández moved infield, owing to Mbappé and Benzema favouring drifting towards the left (below).