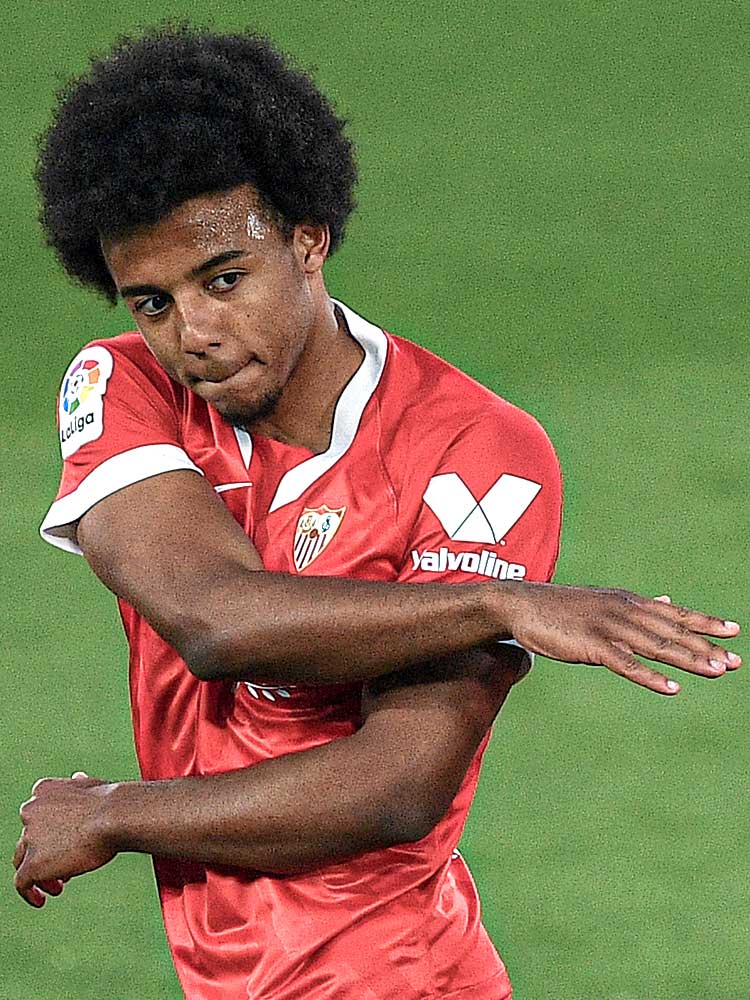 Profile
Jules Koundé became Sevilla's club record signing when, aged 20, he arrived from Bordeaux for €25m in June 2019, when the club were confident he would prove a similarly sound investment to Clement Lenglet, signed from Nancy before moving, for a profit, to Barcelona. Two years on he has demonstrated everything required to become a central defender of the highest calibre, and to the extent he has attracted several of Europe's most powerful clubs.

"He is a young player who can still improve over time," said his central defensive partner Diego Carlos. "He has got great qualities. He is very strong and I am sure he can play for a big club as a great defender."

Tactical analysis
Koundé is most naturally a right-sided central defender, but he is sufficiently agile, athletic and technically gifted that he can also play perfectly well at right-back. Making lengthy, lung-busting runs, he performs there with the competence of a professional full-back.

At 5’11”, Koundé is neither particularly tall nor broad for a central defender, but he exhibits great strength when challenging for the ball. In those individual duels his speed gives him an edge when chasing the ball, and a powerful leap means he can win aerial battles – a valuable trait at both ends of the pitch.

To facilitate his team’s build-up, he positions himself wide on the right side of defence, leaving space for a central midfielder to be positioned between him and his defensive partner to create a numerical advantage against a front two. If Koundé is left in space to progress possession and carry the ball out of defence, he is confident enough on the ball to do so, and can accelerate quickly to drive out with it at his feet.

He is adept at switching play (above) with medium and long-range passes, and repeatedly executes doing so with great success. His deliveries allow his team to quickly move their opponents from side to side; Koundé can bypass his centre-back partner, and sometimes the relevant full-back, to get the ball straight to the winger to speed that process up. Similarly, when facing a high press he can look to find a teammate in the space behind the opposition’s defence with long, direct balls over them. He is far more comfortable with his right foot than his left, but if under pressure he does not hesitate to use his left to play long or short passes.

When his team pushes forwards, Koundé is comfortable holding a high line and stepping out to win the ball because he trusts himself to be able to make up ground with his impressive speed (above). For that reason he stays close to his direct opponent in anticipation of an opportunity to win the ball, potentially leaving big gaps in behind, but if one occurs he expects to win the race if the ball goes over the top.

He can also provide his team with forward thrust by driving forwards with the ball or following a forward pass with a supporting run – doing so can even mean he sometimes arrives in the penalty area to attack crosses. It is also not unusual to see him in a wide position, as if he were a right-back, and instead being the one to play the cross. He even has the dribbling ability and pace to beat an opponent one-on-one. There are few other defenders so clearly comfortable in just about any position on the pitch, which demonstrates his all-round ability.

Role at Sevilla
Koundé plays as the right-sided central defender in Sevilla’s 4-3-3, and his role in their build-up phases is generally to quickly feed the ball to a central midfielder after they withdraw to receive from a defender. Therefore his passes, though often vertical, do not always have to be made through the opposition’s first line – one of Ivan Rakitic, Joan Jordán and Fernando is willing to move to take the ball.

That is not to say that Koundé does not have the ability to take the ball out from the back himself. Quite the opposite. When the situation requires – perhaps after the opposition blocks the passing lane to a midfielder – he pulls wide to receive a switch of play and will move out quickly with the ball (above). Fernando then drops in to cover for him, given he might begin one of his marauding forward runs.

Koundé willingly supports attacks and advances into the opposition's area where, on occasion, he even provides the finishing touch, as was the case in the first leg of Sevilla's Copa del Rey semi final with Barça in 2020/21. He will often be left as the last defender when his team is attacking, when he is ready to compete with any opponent in a one-on-one should they launch a counter. He relies heavily on his speed when that is the case (above), when he is capable of holding off the fastest of forwards and he times his attempts to win the ball well.

He is an intelligent defender who shows maturity for a player so young, and in a position in which young players tend to make mistakes. Those he is guilty of making often owe to overconfidence and a lack of experience, but both should become less problematic as he continues to develop.

Regardless of his willingness to challenge for the ball, Koundé doesn't concede many fouls, and he is very rarely booked, largely because he prefers not to go to the ground and instead attempts to steal the ball while on his feet. His intelligence extends to his tactical understanding; he makes sound decisions, based on the whereabouts of his teammates, as to when to step out and engage an opponent.

He is also a physically capable defender who blocks crosses and shots effectively. In aerial contests (above) he wins most of his duels, and alongside Carlos he makes Julen Lopetegui's team formidable in the air. When he makes aerial clearances he is capable of directing the ball far enough away from goal that the threat of second balls is minimal. He can, however, still improve at identifying when to get tight to his opponent when crosses come in, because he sometimes gets too tight and is beaten by a clever, quick run.

Koundé has the potential, personality and drive to make it to the very top. All of that has so far led him to becoming a crucial player in Sevilla's starting XI, and led to interest from some of Europe's biggest clubs. All are teams that see in the Frenchman a centre-back with a great present and, above all, a huge future.