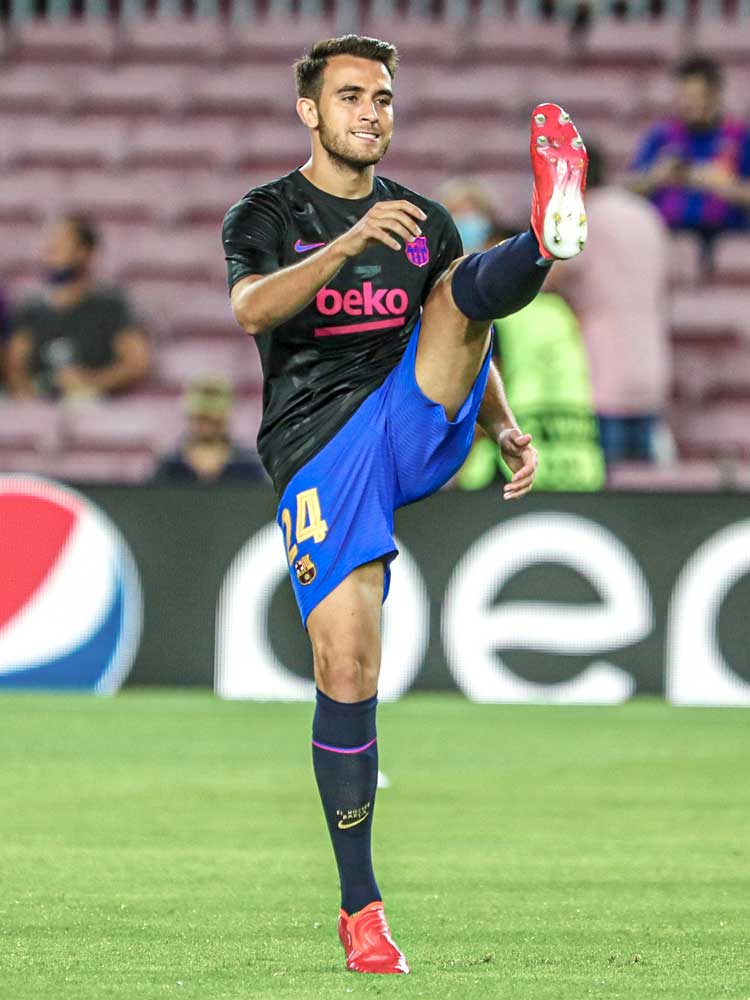 Profile
As Barcelona rebuild, and move on from the traumatic departure of Lionel Messi, it is increasingly Pedri, Frenkie de Jong and Eric García – the latter recruited for free when his contract expired at Manchester City in June 2021 – who are expected to provide the core of their new team. A graduate of La Masia before moving to City in 2017, few are more aware than García of what Barça demand.

García was 20 and already a regular with Spain when his transfer was confirmed. Pep Guardiola, his manager at City with whom he shares so much footballing alma mater, once said: "He's an incredibly clear guy, and able to lead the line. He's so clever."

Tactical analysis
Despite being a defender, it is in possession that García most shines. He stands out for his ability in build-up phases, which is what makes him so perfectly suited to the possession-based game played at City and Barça, and with Spain.

His ability to filter passes into midfield by finding the gaps in the opposition’s press means he can progress play from defence and help his team to move upfield quickly and effectively. He is skilled at finding players in space who can ensure the move continues progressing (below). Although he is capable when making sideways passes, he prefers to be the player who filters the first pass into midfield; his coaches will often give him the freedom and responsibility to do so, so when he gets the chance, he looks to progress play. He is confident in his ability, and will always look to take the ball.

A technically gifted player, García also impressively reads the game. If he has to pass over a teammate or an opposing line, he always does so with the intention of giving that teammate the chance to progress play with their first touch by ensuring his passes are executed with sufficient detail, and he is almost as effective with his weak foot as he is with his stronger right. Another trait that makes him effective in possession is his body orientation. He is always positioned correctly so that when he receives the ball he is ready to take it into an area that will most benefit his team.

García is similarly adept at passing over short, medium, and longer distances, and at Euro 2020 had success finding Álvaro Morata, a striker, with direct, vertical passes. He was particularly effective at noticing when Morata was about to make a movement away from the opposition’s defence, and therefore played his pass at the best possible moment to feed his teammate. If García is left with space to advance into, he willingly moves forwards with the ball, potentially into the opposition’s half, before releasing it forwards (below).

Despite his youth, he also shows great leadership. He commands, organises, and ensures that the distances between teammates are correct so that his team’s shape remains suitably compact. He leads by example, squeezing his team up the pitch and staying close to their attack so that he is ready to intervene when the ball is cleared and can prevent a counter. Defensively, he generally attempts to avoid individual duels he is unlikely to win, and does so by trying to anticipate troubling situations with his movement, his positioning, and his team’s shape. He prefers to step in to intercept the ball over committing to physical battles and, with his tactical intelligence, reduces the need for risky actions such as going to ground or leaving himself one-on-one with an attacker.

He is small for a central defender, and so struggles in aerial contests (below). However, knowing that he is weaker in those situations, he tries his best to harass his opponent and to distract them, making it as difficult as possible for them to win the ball cleanly or to control it. If he can improve when defending one-on-one, when he can be ineffective at stealing the ball if the opponent faces him up, he can become a more rounded defender – even if he is proven at delaying his opponent to give his teammates time to make recovery runs.

Role at Barcelona
In Ronald Koeman's team, García is the right-sided centre-back, and capable of playing in that position both in a back four and as one of three central defenders. Koeman has often changed between those two systems during his time at Barça and, in a squad possessing numerous young, talented defenders – Ronald Araújo and Óscar Mingueza  included – García faces competition for selection.

He is regardless the perfect player for Barça's possession-based game, given their central defenders' roles in their build-up are just as important as their defensive ability. García is the player for Barça goalkeeper Marc-André ter Stegen to seek, and to then feed play into their midfielders. With Spain and Barça he has shown a very good understanding with Pedri, who he always looks to feed via diagonal passes through the opposition’s attacking line, in turn encouraging Pedri to receive on the half-turn, and therefore ready to take his first touch forwards.

In a team like Barça, who favour playing with very attacking full-backs, García is proven at covering the spaces their full-backs have left when the opposition launch an attack, potentially by delaying that attempted attack (above)

His schooling under Guardiola at City and in Spain's national team with Luis Enrique – both mostly favour a 4-3-3, the latter featuring García as Spain's right-sided centre-back – was valuable not only for his overall development but to prepare to play for Barça. He has demonstrated throughout his career that despite his unconvincing physical presence, he is a top-class defender, and also that he can be a force at Barça for years to come.