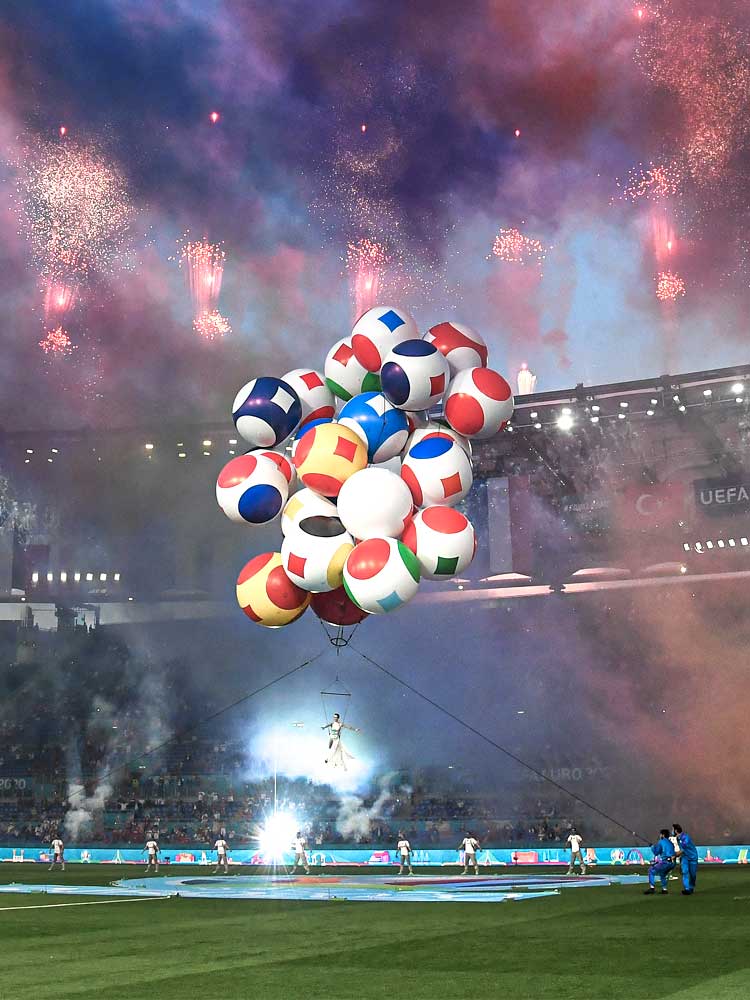 Euro 2020 has already been described as the finest major tournament of the 21st century. Hosted, for the first time, across Europe, and in the middle of a pandemic that caused it to be delayed by a year and for so many of the world's leading footballers to have entered it off the back of an unrelenting schedule, the conditions for it to be such a success appeared mostly absent.

Yet there remains something about the romance of international football tournaments that repeatedly inspires so many superb players to produce their very best, in turn rewarding the supporters for also creating atmospheres unlike those so often experienced during club fixtures. There were also numerous narratives to capture the imagination, and in Italy, the most impressive of winning teams.

Euro 2020 started much as it finished a month later – with celebratory scenes led by the Italians. The Stadio Olimpico in Rome hosted the competition's opening fixture between Italy and Turkey. Roberto Mancini's team recorded a convincing victory after scoring three second-half goals.

Those in attendance were serenaded before kick-off by Italian opera singer Andrea Bocelli as much as were those watching at home. Fittingly, for the occasion of the first international tournament fixture since the revered Italia '90, he sang Nessum Dorma.

Bocelli, incidentally, sang that same song, after asking Claudio Ranieri if he could do so, on the same day in 2016 that Leicester City were awarded the Premier League title.

The sartorial elegance of the debonair Mancini and his management team of Gabriele Oriali, Alberico Evani and Gianluca Viall also consistently caught the imagination.

Only the very next day, in only Euro 2020's third fixture, the celebratory scenes gave way to others that were nothing short of horrific. During the Group A match between Denmark and Finland, Denmark's Christian Eriksen collapsed after suffering an on-field cardiac arrest, and required resuscitation. Finland's players understandably struggled as much as Denmark's to hide their concerns.

Eriksen received treatment for 15 minutes and was taken away on a stretcher. The players then returned to their changing rooms for an hour until they were told he had regained consciousness in hospital, and later finished the remainder of the match. Finland won 1-0.

There is little question that the trauma they had had to suffer through, and the absence of so important a player, could have undermined Denmark's ambitions. It instead appeared to galvanise them.

Their 4-1 victory over Russia was as emphatic as it was deserved. It also ultimately generated a sense of momentum that took them into the semi finals.

England's Raheem Sterling was another who thrived with both a sense of momentum and purpose. It was at Wembley Stadium, 523 yards from the home he grew up in, that he scored England's first goal of the competition, securing a 1-0 victory over Croatia.

Scotland and Czech Republic joined England and Croatia in Group D. On the occasion of Scotland's first match at an international tournament since 1998, two goals from Patrik Schick, the second from near the halfway line, delivered a 2-0 victory at Hampden and provided the foundation for Schick to become, alongside Cristiano Ronaldo on five goals, the competition's joint-top goalscorer.

Much was rightly made of the extent to which Gareth Southgate's young team sets so admirable an example with their conduct. Their encounter with Scotland, that ended 0-0, was a particularly tense affair.

In many countries, Euro 2020 represented a rare opportunity for supporters to gather to follow their teams' fortunes in public.

Romelu Lukaku entered Euro 2020 at the end of his best ever season in club football, in which he had been so instrumental as Inter Milan won Serie A. He scored four goals in five appearances as Belgiun reached the quarter finals, where they lost to Italy.

In the absence of the injured Virgil van Dijk, Georginio Wijnaldum was Netherlands' captain. He scored three times as they won all three Group C fixtures before being eliminated by Czech Republic at the round of 16.

Wales also reached the round of 16, having, like Italy and Switzerland, also progressed out of the competitive Group D. They were eliminated by Denmark.

Another competition, another trophy for Ronaldo. He was awarded the golden boot after, like Schick, scoring five goals, but doing so in fewer minutes.

Luka Modric has long been perhaps even more important to Croatia's ambitions than Ronaldo has been to Portugal's. He restored Croatia's lead when they beat Scotland 3-1, having produced one of the finishes of the tournament with the outside of his boot.

Pro-LGBT protests were also a feature among supporters at Euro 2020. On one occasion, during Hungary's national anthem before they kicked off against Germany, one supporter even made it on to the pitch.

Even more dramatic was the Greenpeace parachutist at Munich's Allianz Arena, where Germany were playing France.

France largely outplayed Germany, but required an own goal from the recalled Mats Hummels to secure their 1-0 victory.

Germany rarely convinced. They faced elimination when they were losing their Group F fixture to Hungary – until Leon Goretzka's late strike secured a 2-2 draw and took them into the round of 16, against England, at Hungary's expense.

Marko Arnautovic received a one-match ban for his celebration, when he was deemed to have "insulted another player" as Austria defeated North Macedonia 3-1 in Group C. Arnautovic has Serbian heritage, and appeared to direct comments at opponents Egzon Bejtulai and Gjanni Alioski, who have Albanian roots. The 37-year-old Goran Pandev had earlier scored North Macedonia's first ever goal at a major international competition.

Schick scored the last of his five goals by recording Czech Republic's second as they beat Netherlands 2-0 to reach the quarter finals.

Karim Benzema's recall by France was a significant shock, but he rewarded their manager Didier Deschamps with four goals in four appearances, the third and fourth against Switzerland in the round of 16.

Paul Pogba's masterful finish had put France 3-1 up, but Switzerland impressively recovered to force extra time and then penalties.

Kylian Mbappé, the golden boy of French football, missed the penalty that France needed to score to avoid defeat. Yann Sommer denied him with an impressive save.

Thomas Müller, also recalled by Germany, missed a chance he was perhaps even more expected to take when one-on-one with Jordan Pickford after Sterling had put England 1-0 up against Germany.

Harry Kane followed him doing so by scoring his first of the competition to double England's lead and seal a memorable 2-0 victory.

It also brought redemption for Southgate, whose penalty miss in the semi finals at Euro '96, and also at Wembley Stadium, sent Germany into the final at England's expense.

Leonardo Spinazzola was so influential a performer for Italy that he made the UEFA team of the tournament, despite not appearing after their quarter final victory over Belgium, in which he cruelly suffered a ruptured Achilles.

Álvaro Morata also achieved a sense of redemption when he responded to death threats aimed at he and his family, after his struggles in front of goal, to produce an outstanding finish that restored Spain's lead in extra time as they eventually recorded a thrilling 5-3 win over Croatia to reach the semi finals.

Wembley Stadium hosted both semi finals and the final

Morata came off the bench to score Spain's only goal on an evening when only penalties separated they and opponents Italy.

The striker was also one of those who missed a penalty as Spain lost.

Pedri, regardless, had earlier demonstrated the extent to which he represents the future of Spanish football. The 18-year-old produced one of the performances of the tournament, and to the extent that even Giorgio Chiellini was among those to struggle to defend against him.

Italy's celebrations after beating Spain on penalties came with them having not even qualified for the 2018 World Cup.

England had reached the semi finals in Russia, but their 2-1 victory in extra time over Denmark took them into their first final for 55 years.

So dramatic was the final between England and Italy that the tournament's closing ceremony was largely overlooked.

Luke Shaw, one of England's most important players throughout Euro 2020, gave them the lead in only the second minute.

After a promising start to their shootout, Marcus Rashford became the first England player to miss.

Pickford, who impressed throughout in conceding only two goals all tournament and recording five clean sheets, performed his most impressive act of all by so unexpectedly holding his nerve to deny Jorginho.

When Bukayo Saka then saw his penalty saved by Gianluigi Donnarumma, Italy were finally crowned winners.

Mancini's team gave Southgate's a deserved guard of honour at the end of another remarkable evening.

Both will again be among the favourites at Qatar 2022.