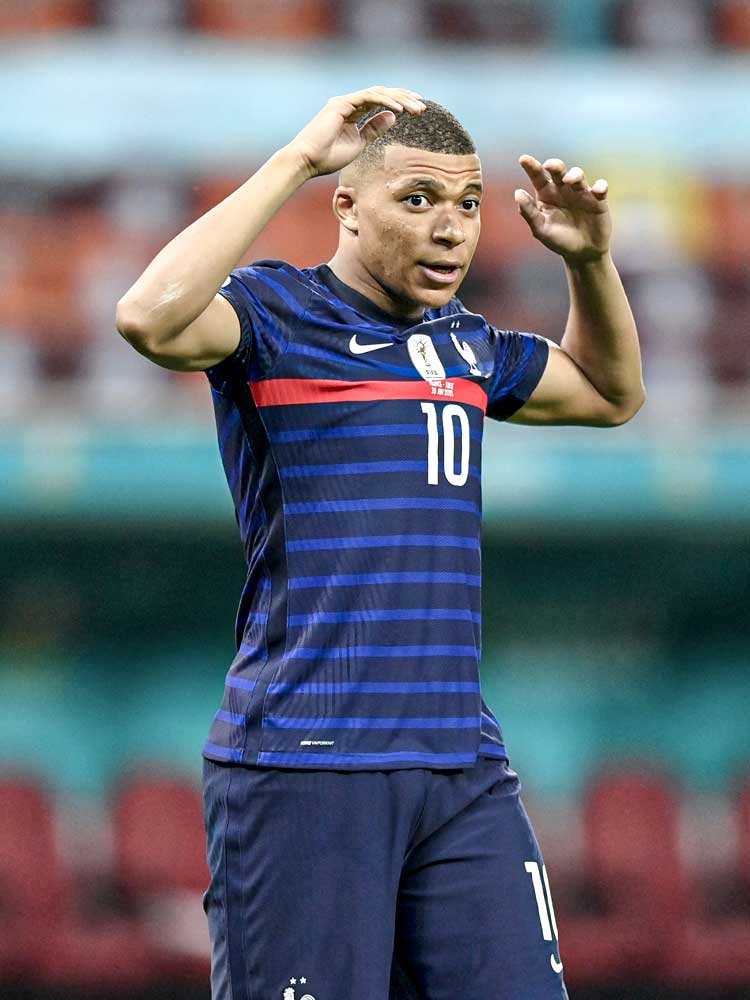 World champions France were eliminated from Euro 2020 when Kylian Mbappé, the golden boy of French football, missed from the penalty spot at the end of a dramatic and entertaining 3-3 draw. Didier Deschamps' team recovered from a losing position to go 3-1 up via fine finishes from Karim Benzema and the superb Paul Pogba, but Haris Seferovic headed his second goal and Mario Gavranovic scored the latest of equalising goals to force extra time. When they could not be separated, and with Switzerland leading 5-4 on penalties after each player had scored, Mbappé cruelly saw Yann Sommer save, crushing his and France's dreams. "Nobody can be annoyed with him," said Deschamps. "When you take the responsibility, it can happen. He is obviously very affected by it." His opposite number Vladimir Petkovic said: "It was an emotional match, maybe too emotional."

Didier Deschamps set France up in a 3-4-1-2 structure against Switzerland’s 5-2-3 mid-block. Adrien Rabiot was used in an unfamiliar left wing-back role, and most of France’s rotations in their front line came in the left inside channel, where Antoine Griezmann most commonly moved from his position as their number 10 to create space for a central, forward pass into a forward. Alternatively, one of Karim Benzema or Kylian Mbappé moved wide, and the other remained on the last shoulder of Switzerland's defence to threaten in behind, proving particularly threatening when Paul Pogba collected in midfield and had time and space to play forwards.

For the majority of the first half, however, France had too many players on the outside of Switzerland’s defensive block. Switzerland's narrow front three blocked central access, one of Pogba or N’Golo Kanté withdrew back into France’s defensive line, and Switzerland's double pivot then moved tight to Griezmann – becoming a number eight alongside one of Pogba or Kanté – further undermining their potential to play to feet in the central areas of the pitch. France’s front two moved wider as a consequence, and looked to combine with their wing-backs, reducing France's attacking presence close to their opposing central defenders but helping them maintain possession further forwards and to force Switzerland into a lower block.

At half-time and a goal down, Deschamps reorganised his team to use a back four. Kingsley Coman replaced Clément Lenglet and, thereafter, France used a 4-4-2 that provided different attacking options on each side of the pitch. Griezmann played towards the right but constantly moved infield with Benjamin Pavard overlapping; towards the left, Coman and Rabiot held wide positions.

When play again became more settled, Griezmann and Coman moved back towards the wide channels, and Pogba advanced further to support Benzema, who continually withdrew away from Mbappé and Switzerland's defence. France attemped to protect  their lead at 3-1 after Pogba's superb finish, but their 4-4-2 was too easily penetrated – particularly in the gaps between their wide and central midfielders – and Switzerland scored two late goals to force extra time.

France continued to attack with a 4-4-2 and a low block, when needed, in defence, but with Olivier Giroud and Moussa Sissoko having been introduced to join Mbappé in attack, they posed too little threat on the break. Switzerland began to tire and formed their own low block – often via both wide midfielders withdrawing to support their back four – which France couldn’t find a way through.

Switzerland manager Vladimir Petkovic organised his team into a 3-4-1-2 formation.  Their opponents, France, defended with a 5-3-2.

The right-footed Steven Zuber featured on the left, from where, as early as possible, he advanced into the left inside channel to encourage Ricardo Rodríguez to overlap and provide their attacking width and provide crosses into the penalty area. Granit Xhaka covered him when he did so, so that Manuel Akanji could retain his position.

That that was unfolding towards the left freed up Xherdan Shaqiri to drift to towards the right, where Silvan Widmer provided their width, and contributed to their attempts to build – in turn encouraging Breel Embolo and Haris Seferovic to remain advanced. It was in the wider areas of the pitch that Switzerland demonstrated their greatest potential, and not least because France's front two worked to discourage Xhaka and Remo Freuler from advancing. It was via Rodríguez overlapping forwards that the cross was provided from which Seferovic headed them into the lead.

Shaqiri attempted to offer direct runs in behind, often off of Seferovic's positioning, and to drift into the right inside channel, encouraging Embolo to receive in the left inside channel and carry the ball forwards when doing so. His movements stretched France's back three, by drawing Raphaël Varane out of position.

France reorganised to defend from the second half with a 4-4-2, contributing to Switzerland increasingly attempting to attack during moments of transition, when they again prioritised doing so with width. Combinations between their wing-backs and their wide-moving attacking players made them effective at doing so; it was a counter-attack from which they won the penalty saved by Hugo Lloris.

Les Bleus built on that through Karim Benzema scoring twice in quick succession. Their new shape also forced Switzerland into a low block, in which Shaqiri started to operate from alongside Xhaka and Freuler to contribute to their attempts to access the inside channels.

Mario Gavranovic replaced Shaqiri and joined Seferovic in a new front two, who between occupied France's two central defenders, and Kevin Mbabu came on to feature at right-back in what became a 4-4-2. It was from Mbabu's cross that Seferovic headed his and Switzerland's second goal. Gavranovic, withdrawing off of Seferovic, also had an effort ruled out for offside before scoring their equalising goal after they successfully broke through midfield.

Switzerland thereafter continued to focus on penetrating forwards via Gavranovic's movements and the runs of their wide midfielders, but with France defended with a low block they struggled to continue to create. It required penalties to separate the two teams.