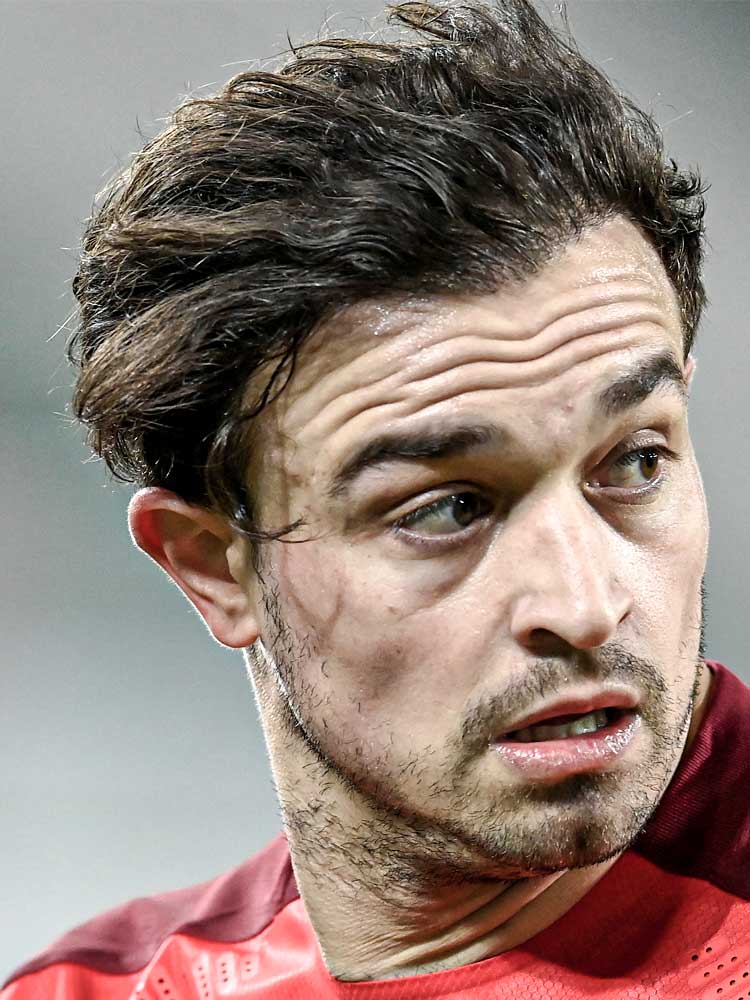 Profile
Liverpool have increasingly found value by looking to the Premier League’s relegated clubs for new signings. Andy Robertson from Hull, Georginio Wijnaldum from Newcastle and Xherdan Shaqiri from Stoke City have proven three great recruits after suffering relegation. Each has, since joining Liverpool, won both the Premier League and the Champions League.

The diminutive Shaqiri is more used to winning trophies than he is battling relegation – he won three Bundesliga titles in three seasons at Bayern Munich, and contributed to the club’s first ever treble in 2012/13. Though he hasn’t played a key role for Liverpool, having been signed for just £13m, he has made some valuable contributions.

Tactical analysis
Shaqiri has several strengths that make him suited to playing for a team that dominates the ball. He is extremely comfortable in possession, always looking to receive, and terrific at dribbling with speed. He is capable of changing direction with ease, making him effective at moving past opponents, and poses a threat when shooting from distance. He is also a very useful set-piece taker and proven either when shooting from a direct free-kicks or delivering corners into the penalty area.

Though left-footed, Shaqiri predominantly operates in the right half-space and in central areas. He is at his most comfortable when moving infield from a wide starting position, and favours cutting inside so that he can use his left foot and bend the ball towards goal by either crossing, or shooting from an inside right position. When he does cut infield, he provides his teammates with the trigger to make their runs beyond the opposition’s defence (below).

Shaqiri simply never shies away from possession, and leads by example through his desire to take the ball and control of play – much of the reason that he has captained, on several occasions, Switzerland. He seeks to play a key role whenever he can, and will therefore work hard to find space to receive passes in threatening areas, content to receive the ball between the lines before then looking to progress play – often via a clever flick around the relevant opponent.

When an attack is unfolding on the left it is common to see Shaqiri delay until the latest possible moment before committing to it. Instead of rushing to participate, he observes, and then uses the movements of others to create space for himself.

Allowing the attackers in front of him to make threatening runs beyond the opposition’s defence, he then adopts positions in the space that has been left on the edge of the penalty area (above), to provide a potential cut-back option or to pick up clearances and deliver the ball back into where his team can threaten. He also has a surprisingly good burst of pace for a player of his height and build, and can therefore sprint in behind on the rare occasions he gets ahead of the ball.

Shaqiri has very few technical deficiencies, but at 5ft 7ins he is regularly the smallest player on the pitch and adds minimal physical presence to his team. He is regardless combative, and tenacious in his attempts to win the ball. He will press willingly when his team needs him to, and he works hard to compensate for anything he lacks in size with his effort, and by diligently covering ground to retain his team’s shape (below).

Role at Liverpool
Shaqiri has struggled for regular first-team football throughout his time at Liverpool, so when he has played it has been difficult for him to perform with consistency. He has largely featured as a substitute, and when he has been selected to start there has been little consistency to his starting position.

Shaqiri has most consistently impressed for Liverpool when, while featuring in their front three, he has withdrawn away from the opposition’s defence to seek the ball in the same way as Roberto Firmino. He is more comfortable receiving the ball to feet than when running in behind, and when he makes that movement it helps to create spaces further forwards for those who provide a greater threat on goal, and who he then attempts to feed with passes into the channels (above). Whichever starting position he is selected in, he consistently drifts infield to create space in wide territory for the overlapping runs of Liverpool’s attack-minded full-backs.

When selected in midfield, Shaqiri mostly remains in front of the opposition’s midfield, from where he receives the ball to feet and spreads play from side to side in an attempt to find a teammate in space. From that position, where he has increased defensive responsibility, he finds it much more difficult to influence play. He nonetheless undoubtedly retains the ability to have an impact at the highest level, and will do so when he gets more regular opportunities to play further forwards.