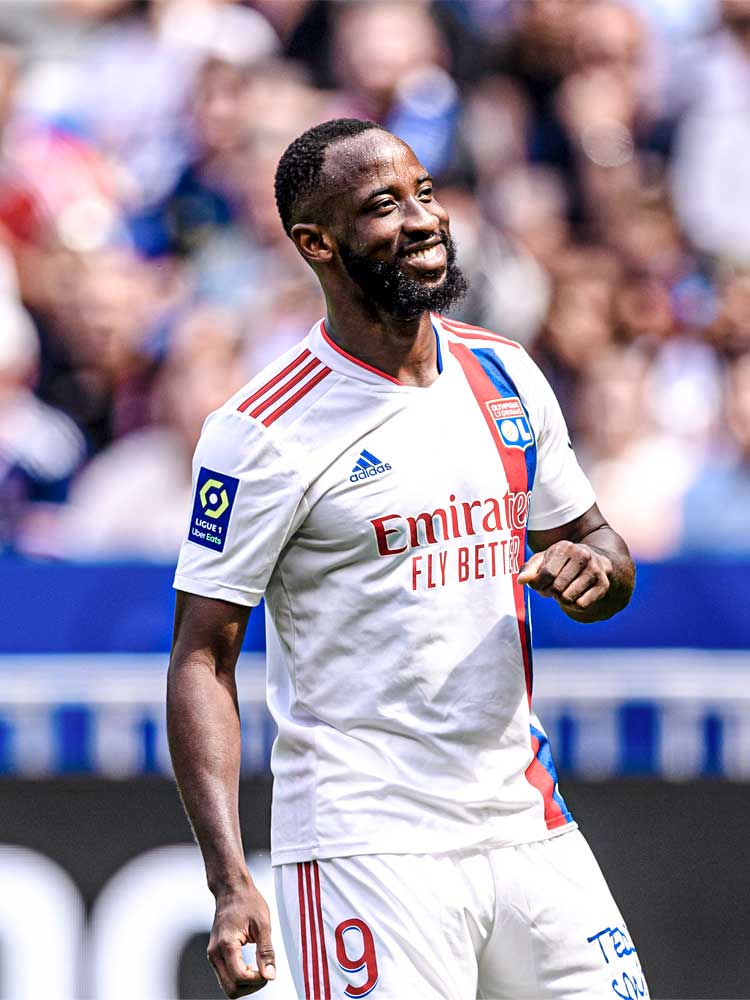 Profile
Moussa Dembélé's return to Olympique Lyonnais, where he had produced his finest football, after spending the second half of 2020/21 on loan at Atlético Madrid perhaps came as little surprise. He arrived in the Spanish capital in January 2021, aged 24, to compete with Luis Suárez, Marcos Llorente and João Félix for selection, and in a team in which Álvaro Morata, Raúl Jiménez and Jackson Martínez had all recently struggled to establish themselves.

Moving on loan, for a fee of £1.35m and the option for him to move permanently for a further £29.9m and £4.45m in add-ons, there was little question he saw his future away from Lyon. "He thinks it is the time to change club," said Lyon's sporting director Juninho at the time of his departure. "He told me he has lost a bit of motivation." His career is since being rebuilt.

Tactical analysis
Dembélé's greatest strength comes in the runs he makes in behind (below). He often positions himself as centrally as possible so that he can receive beyond the opposition's defensive line but still within the width of the goal. He uses his impressive acceleration to move away from his markers, and gives himself the necessary time to compose himself while slowing down to shoot. He is usually calm when one-on-one with a goalkeeper, and therefore often finishes with ease.

He uses double movements when committing to his run in behind, making those movements in a similar manner to Romelu Lukaku. His first aims to take the relevant defender out of position and to create a better passing lane into the path of his second. He then moves in the opposite direction, increasing the possibility of receiving the ball under less pressure and increasing his chances of scoring. He is equally effective with both out-to-in and in-to-out movements, in both his sense of timing and his precision.

When he can, Dembélé prefers to run in behind towards the right, drifting slightly out of his central position before then shooting back across goal. When he finds himself towards the left, he looks to cut back across his opponent before shooting, and therefore requires further touches. His first-time finishes tend to come from more central areas.

While shooting with his left foot Dembélé most commonly prioritises power, and he has had some success in doing so, but there is little doubt that he is stronger with his right. He can vary his finishes more, and he is more composed as a result; he is able to finish with power when needed, and also of disguising his shot and taking the ball around a goalkeeper or lifting it over them.

However at crosses, and when attacking beyond his opponents, Dembélé occasionally chooses to linger behind the ball. When play then moves ahead of him, he positions himself to try and finish from cut-backs (below). He requires decoy runs from a teammate to create the opportunity to finish those cut-backs, because otherwise opposing defenders can intervene and clear; when attacking aerial crosses, instead of competing for headers against larger central defenders, he will attempt volleys.

Dembélé’s link play when not moving in behind can be effective, but he is at his best when facing forwards. With his back to goal he struggles to hold off defenders and to protect the ball while also looking for a teammate to release it to. Just as with his finishing, the fewer touches he takes, the more effective he is when linking play.

Role at Lyon
Prior to joining Atlético, Dembélé scored 45 goals in 108 matches for Lyon – or a goal every 2.4 games, and a slight reduction from his goals-to-game ratio at Celtic, where he scored 51 times in 94 appearances. There exists a clear pattern to his goalscoring at Lyon – before his departure on loan, 93 per cent of his goals came from inside the penalty area. One of his three from outside of it memorably eliminated Manchester City from the Champions League in 2019/20.

During his time at Lyon he has largely been used as a lone striker, and been supported by an array of attacking midfielders either advancing from central midfield or moving infield from wide starting positions. Their then-head coach Rudi Garcia reverted to using a 4-3-3 during 2020/21 after a brief-but-successful period – particularly in Europe – with a back three towards the conclusion of 2019/20 and in the opening weeks of 2020/21. It was after that conversion back to a 4-3-3 when Dembélé temporarily lost his place as Lyon's central striker.

Previously, Tanguy Ndombele and Nabil Fekir were Lyon's two main central creators, and they frequently fed Dembélé’s forward runs and the supporting runs from Bertrand Traoré. After their departures in 2019 to Tottenham and Real Betis, Houssem Aouar, Lucas Paquetá, Bruno Guimarães and the influential Memphis Depay represented their main sources of creativity. From wide positions Karl Ekambi and Tino Kadewere offered powerful movements infield both with and without the ball and provided penetrative runs from wide; they also regularly adopted narrow positions off the ball.

As a consequence, Dembélé, previously the main runner in behind – like Jamie Vardy for Leicester City – found other teammates providing similar movements and crowding his space. Lyon's wide players increasingly offer much earlier runs in behind than their predecessors, and they force their opposing full-backs to move into narrower positions earlier;  Dembélé’s double movements are therefore often met by pressure from those full-backs, hindering his ability to receive facing goal, and significantly reducing his influence.

Their previous wingers’ wider starting positions horizontally stretched defences, creating larger spaces for through balls to be played into. Direct balls through the inside channels could also be used to release Dembélé, those wingers, or their overlapping full-backs, who in turn were capable of crossing towards him.

Lyon's narrower front line of 2020/21, however, reduced those spaces, and Dembélé struggled to get beyond his opponents as often, thus moving both towards the ball more (above) and into the central spaces between the lines. As a consequence he was forced to more often shoot from in front of opposing defences. Throughout 2020/21 for Lyon, nearly a third of his shots came from outside of the penalty area, compared to just 16 per cent during his first two seasons. He is far less effective at shooting from distance, as only two of his 45 goals for Lyon coming from outside of the penalty area demonstrates.