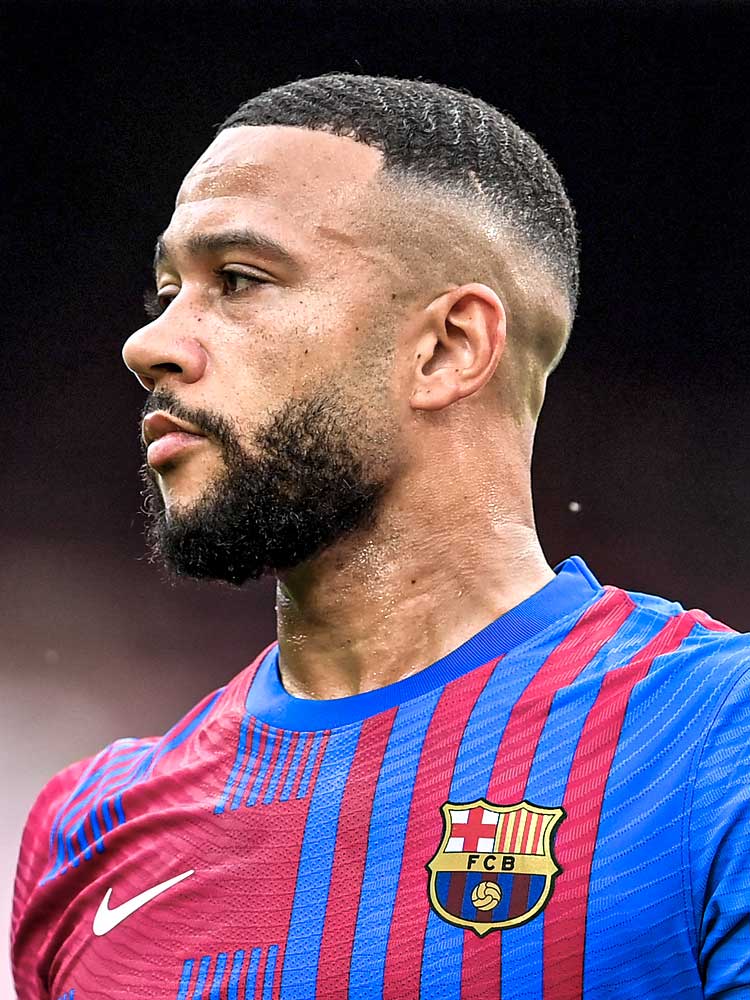 Profile
Memphis Depay is far from the first exceptionally talented player to struggle to establish himself at one of the world's leading clubs after moving to a new country, as he did when joining Manchester United at the age of 21 in May 2015. He is also far from the first to have succesfully rebuilt his career in a less pressured environment, as he did at Olympique Lyonnais from January 2017, and to the extent it came as little surprise when he returned to a similar stage upon signing a two-year contract with Barcelona in June 2021.

Discussing his success in France and his struggles at United, Depay, as crucial to Netherlands' hopes of success as he was Lyon's, said simply: "There, I lost my joy, and my football. Here, I found them."

Tactical analysis
Depay is an extremely versatile attacker who is as effective at creating goalscoring chances as he is at taking them. When he is the attacker running in behind he is capable of securing direct passes played through or over the opposition's defence and then shielding the ball from his marker until teammates can arrive to support him, and uses a similar technique to Eden Hazard when doing so. Using his left arm if his right foot is on the ball, or his right arm if he is playing off his left foot, he holds off his opponent (below) and uses the sole of his foot to manipulate the ball.

His change of direction is similarly effective, and something he often relies on to roll his opponent before driving away from pressure. For all that he is more convincing with his right foot, he can twist and turn in both directions when one-on-one; in almost all circumstances he shows admirable awareness and a willingness to scan for his options, which he often complements by playing accurate passes in the final third.

That same awareness exists inside the penalty area, and contributes to him creating goalscoring chances. If not the most single-minded of goalscorers, Depay is regularly content to create for his teammates even when the opportunity may develop for him to shoot at goal. Many of the assists he provides in advanced territory come in central spaces, and via sideways passes into a teammate making a forward run.

He is just as capable of withdrawing into deeper territory and away from pressure when attempting to progress through a deeper, congested defensive block. From those areas his passing range (below) can instead lead to him breaking lines, and is particularly complemented by quick teammates making curved runs across the relevant defensive line.

Depay's greatest strength, regardless, is his ability to strike the ball. He is a regular set-piece taker who hits both corners and free-kicks with an impressive accuracy that also often applies when he crosses from open play – him doing so, having drifted towards the left or right, has led to many of his assists. He is particularly effective at delivering inswinging balls from the left, and often achieves sufficient dip to ensure that the first few defenders are beaten before the ball drops into the path of his intended target. His most consistent goal threat has long come from driven efforts struck with his right foot, but as he has matured and become more composed, he has improved at controlling the ball with an elegant touch before calmly finishing by using his increased variety of finish (below).

His leading defensive contributions come through him securing loose balls and using his body to protect them until his teammates have moved to provide support. There are also occasions when he makes regains by duelling as an individual, particularly in smaller spaces, but rarely makes interceptions, or presses over increased distances.

Role at Olympique Lyonnais
Depay was most consistently the central attacker, between their wide forwards Tino Kadewere and Karl Toko Ekambi, in Lyon's 4-3-3. Kadeware and Ekambi offered penetrative runs across opposing defences, and Depay moved with freedom, often withdrawing into deeper territory to draw central defenders out of position, to link midfield to attack, and to play passes further into the final third. His movements, and those of their wide forwards, in turn encouraged Lyon's full-backs to advance and provide their attacking width, and sometimes led to rotations with an attacking central midfielder.

He provided further movements towards the left, from where his crosses (below) provided an alternative method of attack. His inswinging deliveries regularly complemented the runs made into narrower positions from their wide players and, if their full-backs remained withdrawn, their attacking central midfielders. Towards the right, in addition to seeking to cross, Depay more regularly combined with Léo Dubois, overlapping from right-back, or his closest central midfielder.

There is little question Lyon's wide players pose a threat when attacking one-on-one; they regularly succeeded in drawing their opposing full-back wider, and therefore in creating increased spaces for their central midfielders to advance into the inside channels via combinations or off-the-ball runs. With teammates close to the ball, Depay resisted moving from his striker's position and instead focused on receiving away from the defenders alongside him.

The runs being made around him and the advanced positions adopted by Lyon's midfielders presented Depay with numerous passing options, which was when his vision and awareness proved such a strength. His passes, cut-backs or crosses into the penalty area regularly found the runs of Lyon's wide forwards or attacking midfielders.

For all that Lyon averaged a convincing grasp of possession, they posed a threat on the counter; their forward runs and direct movements involved Depay running in behind, and being supported in doing so by at least one wide forward or central midfielder; if he moved towards the right, he did so in the knowledge that the left-sided forward would move infield, and that the closest central midfielder would offer support. The arrival of Islam Slimani led to him occasionally featuring as Lyon's striker, and Depay instead adopting a wider role.

From that wider role – and in contrast to their more familiar 4-3-3 (above), they were likelier to be organised into a 4-2-3-1 – on the left he attacked infield. His versatility ensured that he continued to impress, and moved to create space for their number 10 and left-back to attack into, the latter via overlapping runs.