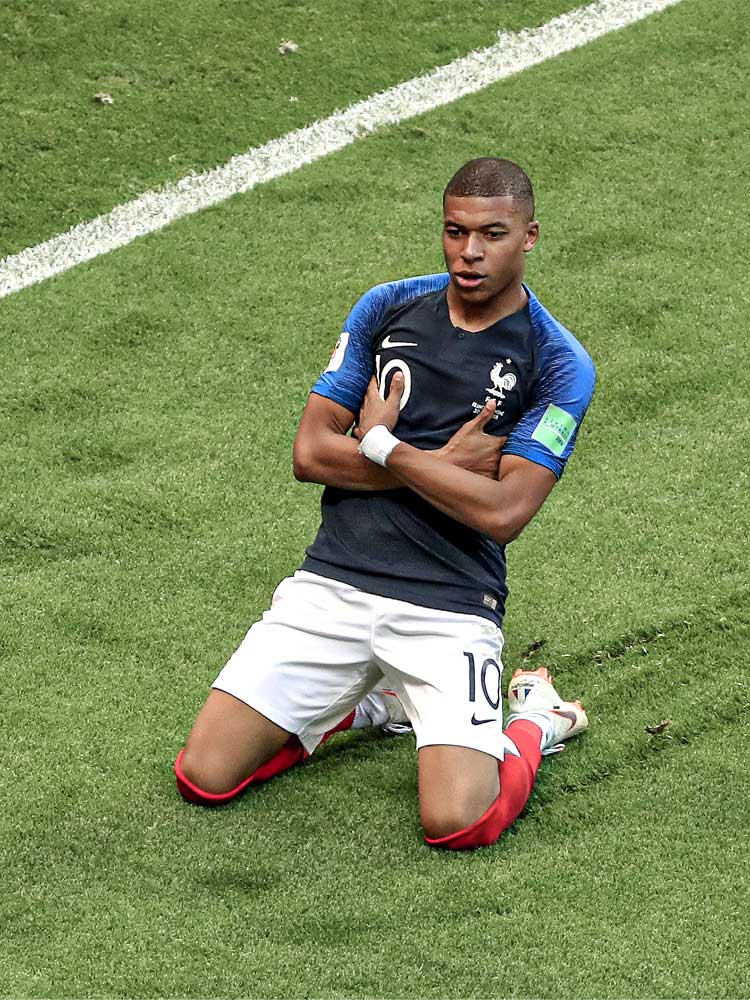 On a day when so many observers were focused on Lionel Messi, it was the then 19-year-old Kylian Mbappé who made the difference in a seven-goal affair between France and Argentina. In perhaps the most entertaining encounter of the 2018 World Cup, two second-half goals from Mbappé sealed Les Bleus’ place in the quarter finals in Russia. They were level at half-time, after Ángel Di María’s sublime strike from distance had cancelled out the penalty scored by Antoine Griezmann when Marcos Rojo brought down the influential Mbappé. Argentina took the lead when Gabriel Mercado diverted Messi’s shot past Hugo Lloris shortly after the restart, but Benjamin Pavard produced a finish that was the equal of Di María’s, before Mbappé took over. Argentina substitute Sergio Agüero scored a late goal to give his team hope, but the full-time scoreline ultimately flattered Jorge Sampaoli and his weary players. 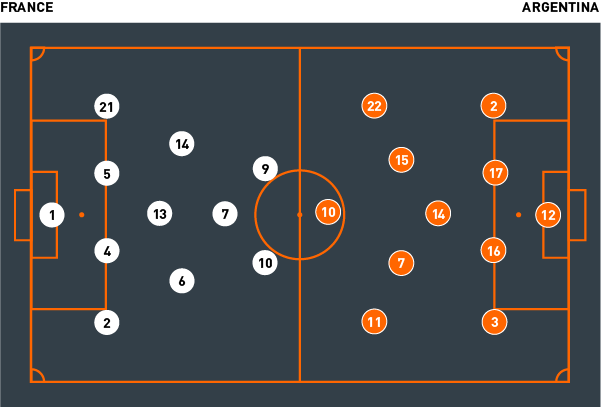 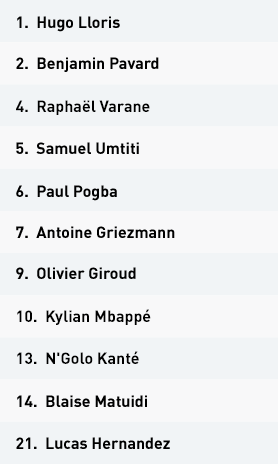 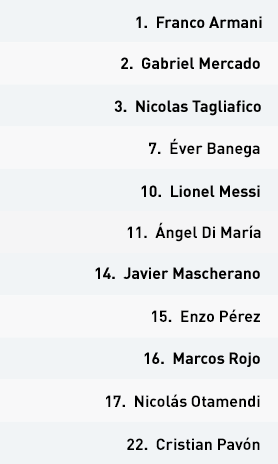 Didier Deschamps made six changes to his team as France retained their 4-2-3-1 formation. Blaise Matuidi returned to the left side of their attacking midfield three, in an attempt to use his defensive abilities to nullify the threat posed by Lionel Messi. France immediately adopted a defensive mid-block intended to encourage their opponents’ defence to build short and to travel upfield with possession. The further Argentina's full-backs advanced, the more space they created in behind  for Kylian Mbappé to surge into.

They played possession towards Mbappé after each regain; his directness troubled Argentina in the central lanes. After being brought down on the edge of the penalty area, Antoine Griezmann struck the crossbar with a superb dipping free-kick in a sign of what was to come.

Matuidi’s qualities helped France to defend against Messi’s movements. With Matuidi dropping into a deep position, Olivier Giroud and Griezmann also moved across while out of possession, often forming an asymmetrical 4-3-3 that not only nullified Messi but also provided additional space for Mbappé to attack during transitions.

It was from the penalty spot that France’s opening goal followed. Mbappé was clumsily brought down by Marcos Rojo following a breathtaking run that started from well France's defensive half, and Griezmann confidently gave them the lead.

Responding to the threat posed by Mbappé, Argentina started to increase their numbers towards the left, reducing the influence of France’s right-sided attacks. Ángel Di María's masterful goal towards the end of the first half also meant that they were level at half-time.

Despite going behind, owing to a deflected strike, early in the second half, France quickly responded. Lucas Hernandez's increased willingness to advance from left-back intensified the pressure Argentina were under, and their right-back Benjamin Pavard’s exquisite finish rivalled that of Di Maria’s as he beautifully struck to find the far corner from distance.

France prioritised their attacks towards the left, which eventually drew Argentina's defence across. Mbappé therefore moved into the central lane, and France once again reverted into a mid-block. With Argentina prioritising building possession in the channels, central spaces existed in which Mbappé could again use his speed.

As Pavard advanced from right-back, Mbappé positioned himself further infield and, shortly after Pavard's goal, the teenager restored France’s lead when quickly shifting the ball away from a compact block of both French and Argentinian players before finding the back of the net. He grabbed his second, and France’s fourth, goal with a clinical finish from Giroud’s cute pass. Although Sergio Agüero later scored for Argentina, France comfortably progressed to the quarter finals.

Argentina used yet another new structure under Jorge Sampaoli. Lionel Messi started as a lone striker, and Gonzalo Higuain and Sergio Aguero were ommitted from their starting line-up.

Despite a reasonable start Argentina struggled to connect possession, largely because of their unfamiliar shape. Inaccurate passes and poor first touches reduced their attack before it had even begun, and they were struggling to restrict France’s access into Kylian Mbappé.

It didn’t take long before Messi chose to focus his movements away from the centre and towards the right inside channel. Argentina effectively built along France’s left, but La Albiceleste had no central presence in attack. France's central defenders had little marking to do, and were able to comfortably command their defensive third. With Argentina struggling to nullify Mbappé's pace, their midfield three mirrored France’s defensive movements and they too began to shift across against Mbappé, contributing to France's transitions becoming far less potent and frequent.

Argentina were given hope when an increased left-sided presence led to Ángel Di María moving ever so slightly infield. In the closing stages of the first half, he then unleashed a spectacular effort from distance that sailed past Hugo Lloris.

Within three minutes of the restart, Argentina took the lead. France struggled to defend at Éver Banega’s free-kick, and Messi’s shot was diverted in by Gabriel Mercado. Their optimism, however, didn’t last long; Benjamin Pavard’s superb effort brought France level.

Argentina then focused the majority of their attacks on the channels, and in doing so created spaces for France to exploit during transitions. A distinct lack of quality contributed to Messi continuing to roam into the channels; both of Argentina's full-backs were also poor in possession, and offered little quality in attack despite their consistently advanced positions.

Sampaoli reacted to France taking the lead by immediately introducing Agüero. Messi could therefore permanently attack from the right, leaving Agüero free to occupy France's central defenders, but Didier Deschamps' team soon scored their fourth goal when they capitalised on the uncertainty that existed among Argentina's midfielders.

A late finished from Agüero only flattered Argentina. Potentially Messi’s last ever touch at a World Cup was a superb dinked assist for Agüero’s goal. This combination could have rescued Argentina if used earlier; the admirable understanding that existed between them quickly became their one positive in possession.